Storm Imogen started out as a low pressure system that left NE Canada on Saturday and deepened rapidly over NW Atlantic into Sunday. The depression has now passed its deepest phase and the centre of the low will fill or rise in pressure as it heads across northern England on Monday as an open wave. However, isobars will be tightly packed beneath this low pressure wave across England and Wales, with the westerly or southwesterly wind gusting to 60-70mph across south Wales and southern England, even inland, perhaps up to 80mph with exposure across the southwest. 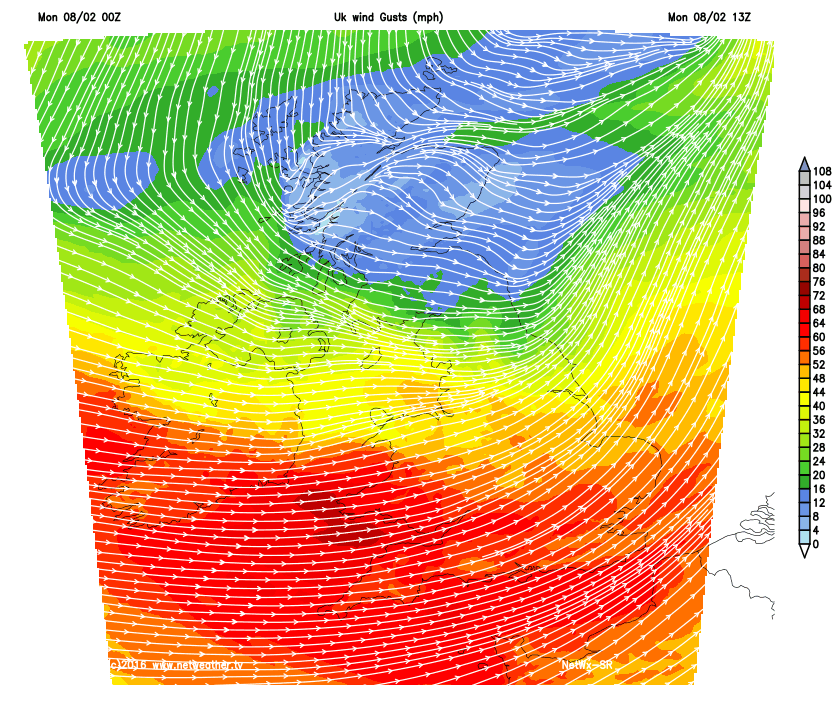 The strong winds are already arriving across west Wales and SW England, Mumbles Head near Swansea has seen a gust of 75 mph recently and Plymouth seeing a gust of 66mph. These strong winds transferring east across southern England during the morning. Winds easing from the west through the afternoon. Temperatures reaching 7-8C across England and Wales, feeling colder in the wind and temperatures dropping in any showers.

The strong winds will likely cause widespread travel disruption during the day, particularly to flights, trains and ferries but also routes across bridges exposed to high winds. Heavy showers accompanied by hail and thunder or longer spells of rain sweeping in from the west across England and Wales through the day will just add to hazardous conditions on the roads. Wind gusts could be strongest during heavy showers passing through as very strong winds aloft are brought to the surface by downdrafts. 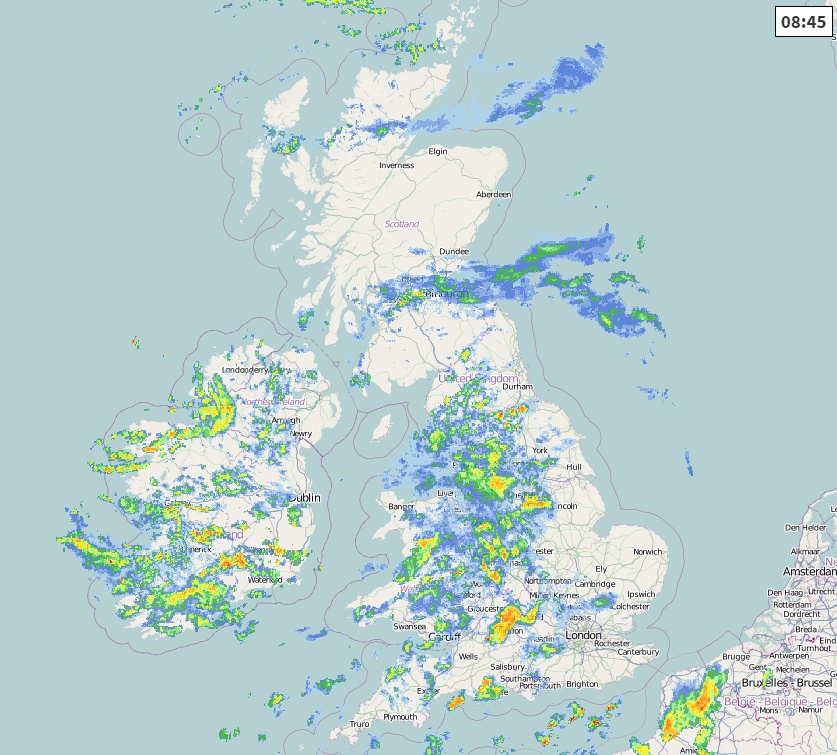 Radar image from 0845 - keep up to date with the latest weather radar here.

Storm Imogen will also generate large swells in the Atlantic, with 30 – 40 foot swells indicated in west Cornwall, so large waves and coastal flooding are likely during high tides.

Winds continuing to ease this evening and overnight across southern Britain, as Imogen moves out into the North Sea, though remaining windy with further showery rain at times across England, Wales N. Ireland and perhaps southern Scotland. Central and northern Scotland mainly dry with clear spells developing allowing frost to develop in places, though showers near western coasts.

It will turn progressively colder heading through Tuesday, as the jet stream moves south of the UK and a tongue of cold air is drawn across the Atlantic from the deep cold sat over northern Canada. 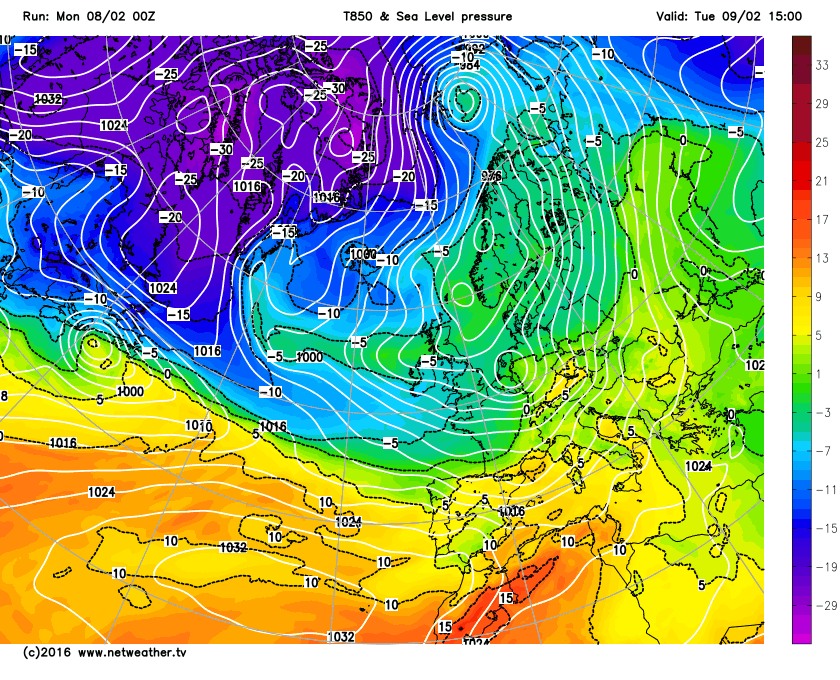 A band of showery rain across N. Ireland, southern Scotland and N. England in the morning will move towards centrals, falling as snow over higher ground.  Some rain affecting southern coastal counties too, perhaps falling as a wintry mix over high ground. Otherwise mostly dry and bright in between these areas of rain or snow.

The jet stream stays well south of the UK for the rest of the week, so we maintain a cold flow from the W, NW or N. 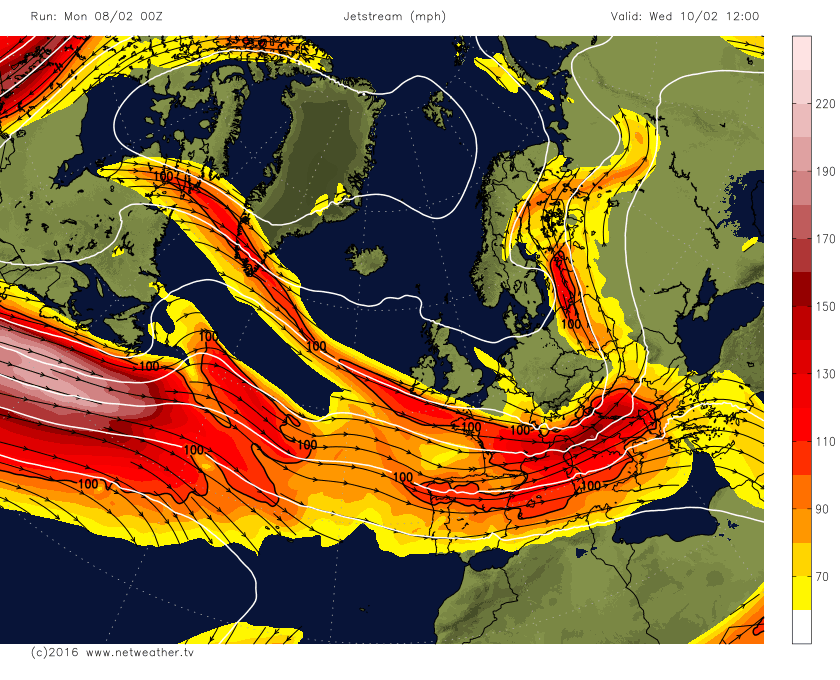 Wednesday, Thursday and Friday are looking cold and bright with scattered wintry showers which will be mostly around coasts, perhaps inland areas staying dry, snow likely to fall over higher ground in the north though perhaps to lower levels overnight too. A frost likely overnight where skies clear, temperatures falling well below freezing in the north. A risk of rain moving in across SW England and Wales on Friday, which could turn to snow on its leading edge as it bumps into the colder air.