Rain and gales from Storm Barney

More wind and rain over the next few days. It’s still blowing a gale (severe for Islands) in the far north of Scotland as the first low of this week clears away. Then we have quite a complicated setup as a procession of low pressures move across the UK west to east. The next one of main interest is heading towards N.Ireland this afternoon as #StormBarney. That will bring heavy rain to N.Ireland, Wales, W England and southern half of Scotland today. Later today, the strongest winds and gales look like moving from Eire across the Irish Sea to Wales, Midlands, NW England towards East Anglia, with windy weather across southern England too. 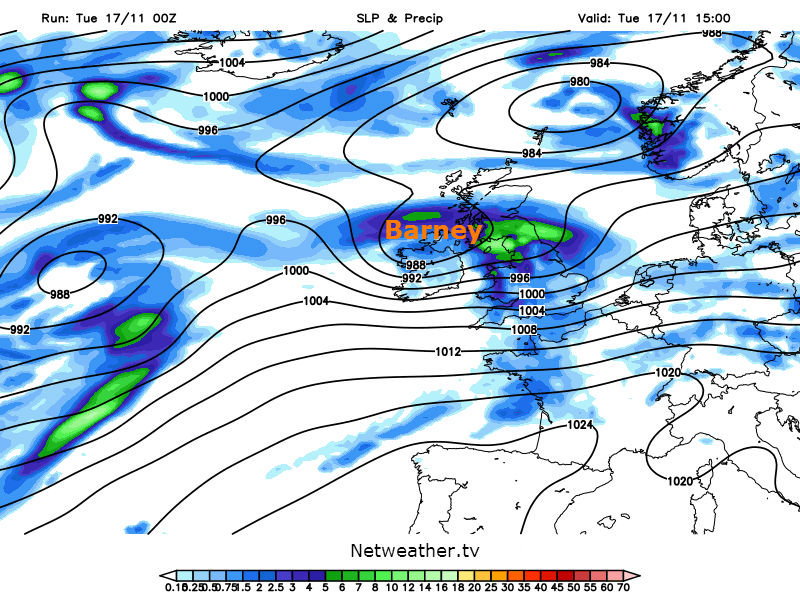 After a brief lull the winds pick up again through Wednesday as a another low pressure skirts past NW Scotland and could bringing disruption to the Central Belt of Scotland  Wednesday evening/night. Autumn is truly whirling through.

For a time this morning there will be a lot of dry weather across Britain as the stormy weather clears from the Northern Isles with a scattering of showers still over the far NW. Northern Britain will manage some bright spells but cloud will increase over southern Britain and N.Ireland. The rain from Barney will approach N. Ireland this morning and also arrive over SW Britain. So turning wet for N.Ireland with some heavy burst and a band of rain passing through Cornwall then Devon and south and west Wales. After a wet lunchtime for N.Ireland, Wales and western Britain, the band of rain will sweep right across England centring across the far north of England and southern Scotland, particularly the central belt for the evening rush hour. Another inch of rain could fall for areas that still have flood warnings.

Rain totals for today - track the latest rainfall on the radar 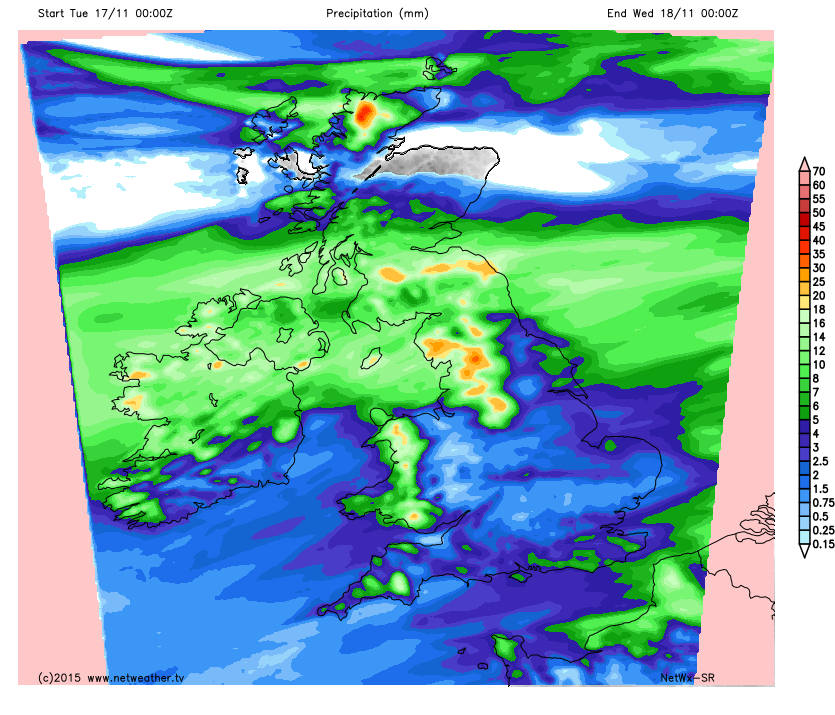 Many parts will become windy by lunchtime in England and Wales (far NE of England and also N.Ireland get windy later). However, the strongest winds are for this evening, clearing eastern England around midnight, as Barney approaches Denmark. 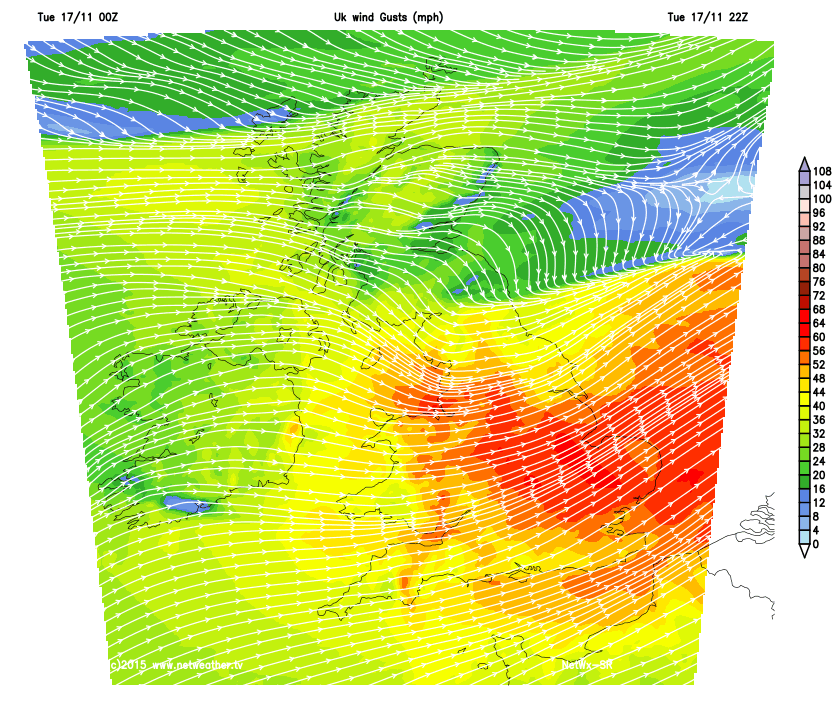 Strengthening SW winds will affect England, Wales and then N.Ireland in the south and east this afternoon with gusts of 60mph for coats and hills. This evening an area of gales, even severe gales will move from eastern Eire across the Irish Sea. These WSW winds will bash into Wales and Lancs. Merseyside before sweeping across the Midlands and East Anglia. Gusts of 70mph are possible, up to 80mph for the west coast of Wales (higher up Snowdonia). There could be impacts for the Severn Bridges this evening, although the strongest winds follow rush hour for most.

With the saturated ground, fallen trees are more likely, conditions on the dark roads will be difficult with surface water and spray, alongside the gusts winds and gales. Do take care if you are travelling later today.

Another low on Wednesday

After a quieter spells for Tuesday night, another low pressure heads towards the UK but further north this time. 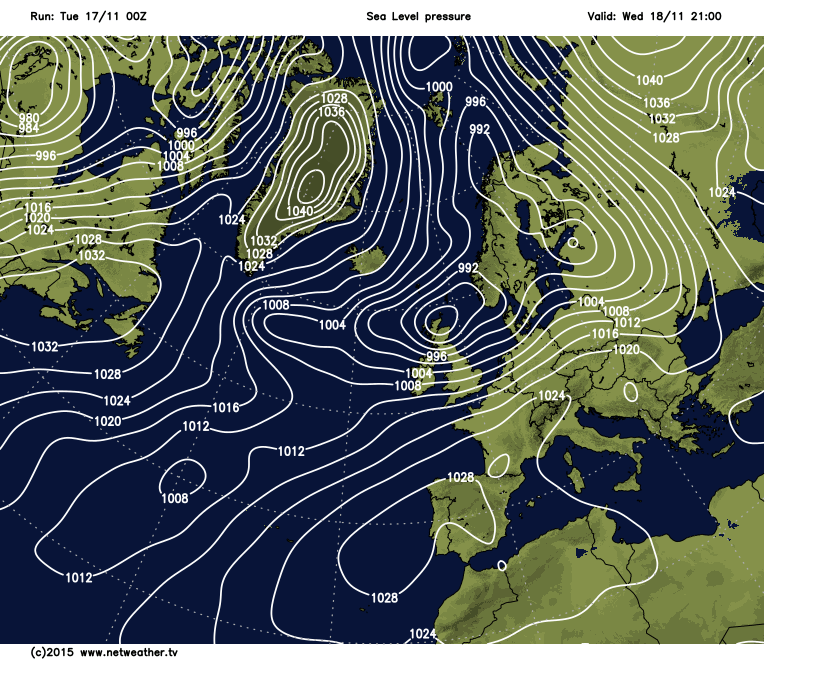 This throws blustery rain over N.Ireland in the morning, and this quickly spreads across W.Britain by lunchtime with more hefty bursts for Wales, hills of NW England and W.Scotland. Southern England stays drier. For the middle of Wednesday it will be windy for Wales and central northern England with strong SW winds, gales in the Irish Sea once more. Closer to the low centre, SW gales will brush the north coast of N.Ireland and through the North Channel before moving through the Central Belt in the evening as WSW winds. Gales onto the west coast in the evening with potentially disruptive weather for the Forth after midnight as the low pulls away.

Colder in time for the weekend

Thursday, even Friday could see a band of damp weather clinging onto southern Britain before a push of much colder air pulls down through the UK bringing a wintry feel for the weekend.