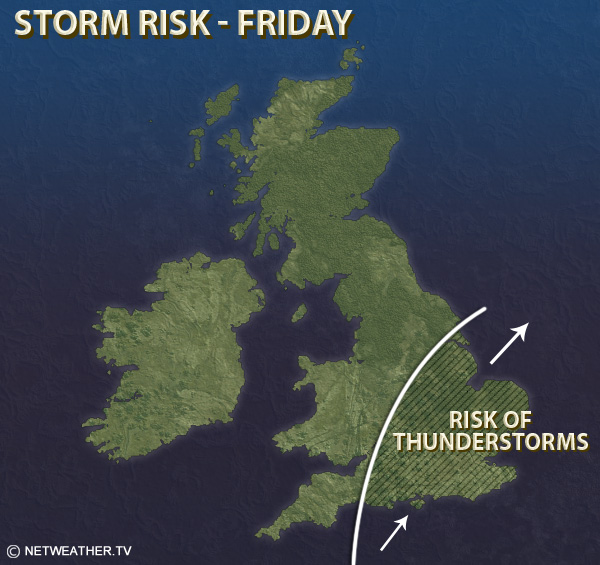 Thunderstorms and heat give way to cooler weekend

Two very different areas of rain today. N.Ireland and W.Scotland have a wet start to the day from a cold front moving in from the Atlantic with temperatures of 11C. SE Britain is having a noisy start with thunderstorms, localised heavy rain and temperatures in the mid teens, already 18 or 19C in E.Kent. Yesterday NW London saw 23.8C 75F and today has the potential to go several degrees higher with this very warm and humid air over SE England. However, the heavy showers are bringing more cloud and the cold front from the west is also throwing cloud ahead of its rain. The feed of thundery showers from the south will miss the main heat of the day over the UK and have drifted eastwards into the North Sea by this afternoon. Still this morning is giving enough of a lively show, Essex and N.Norfolk showing the brightest echoes on the radar.

A stormy morning for the south east 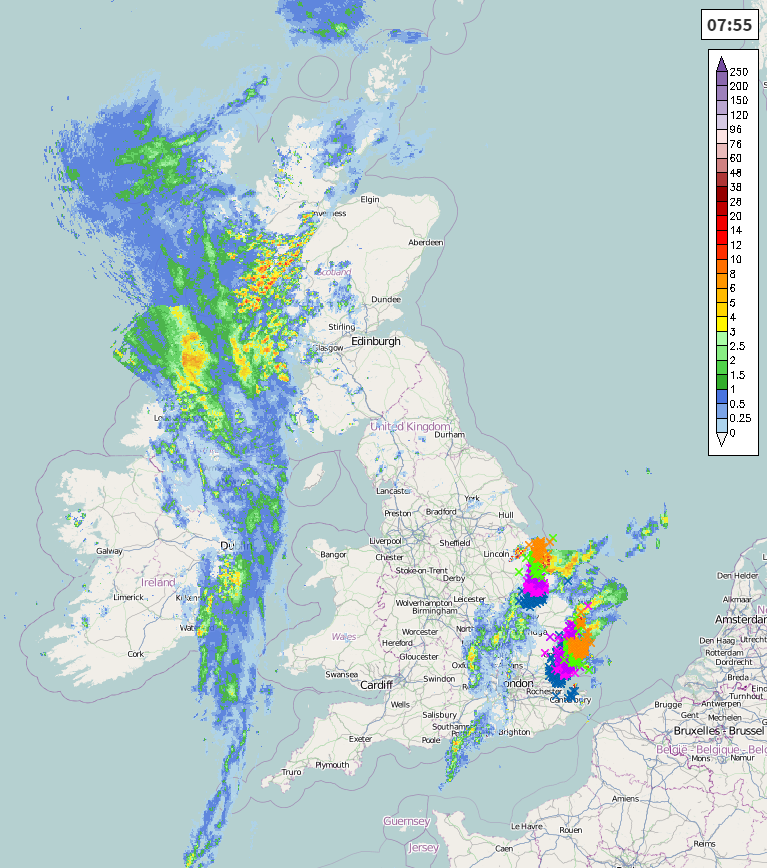 In between these wet areas there is dry, bright weather for the rest of Britain and where the sunshine breaks through the temperatures will rise quickly. Some muggy warmth today with temperatures 18 to 20 for central/ southern and eastern England. SE Britain could 26C maybe higher. Damp and cloudy weather will move into W.Wales and SW & NW England as the front arrives bringing cooler fresher air but some late brightness 14C. N.Ireland brightens up in the afternoon but will feel cool at 14 or 15C. Heavier pulses of rain will move over west and northern Scotland, with temperatures of 12C in the west but still the warmth further east 17C and sunny spells appear later in the day with a few lingering showers. For England it’s a mixed day with some spots staying dry and bright, cloud coming and going. It will feel warm and muggy until the cold front moves in from the west with patchy rain by the afternoon. The thundery showers become more isolated for SE Britain by the afternoon in the heat and humidity. Eastern Kent and Essex, E.Norfolk could continue to see early afternoon lightning and downpours along the coast. As always with these downpours they will miss some areas as other spots run the risk of localised flooding in temporarily intense rainfall.

Heat & humidity being squeezed away by cold front 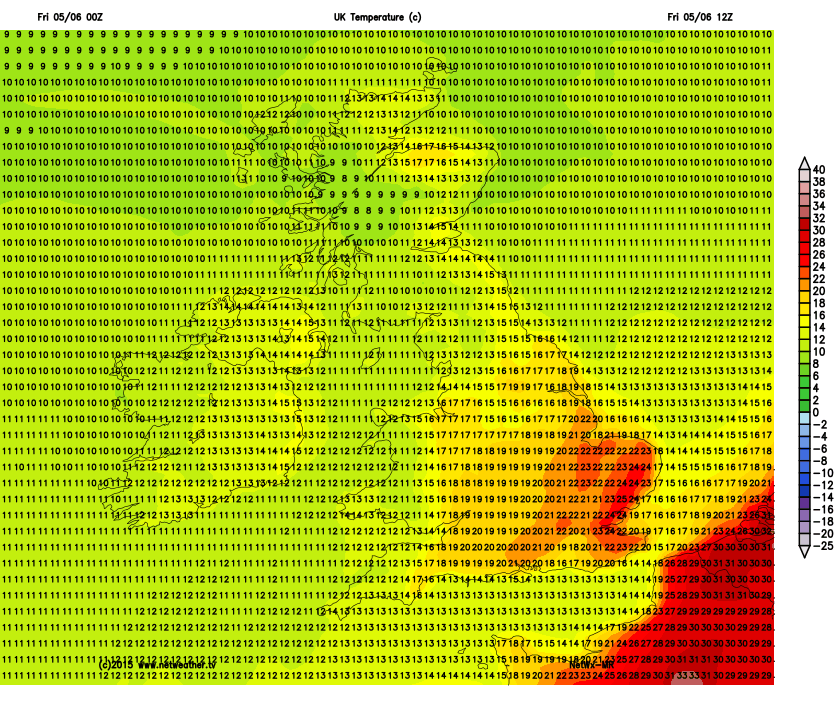 Behind the cold front, a brisk West or SW wind picks up with the cooler fresher air and that flow will clear away all of the muggy humid air, gone! It will be a cool night down to 4 or 5C inland and a low pressure will edge nearer to NW Scotland bringing strong S winds.

For Saturday there will be a lot of dry, fair weather about, away from Western parts. It will be blustery everywhere and cool with strong winds for N.Ireland and N. Britain. A few showers will trouble W.Wales and NW England but there will be lots of showers for N.Ireland although CO. Down will be more sheltered. Heavy rain for W.Scotland in the morning and a feed of showers from the west all day, with some hefty bursts for SW and central Scotland. Eastern parts stay drier and brighter. Sunnier parts of England will reach 16 or 17C further east, for most of the UK it’s 10 to 15C.

Best in the east on Saturday 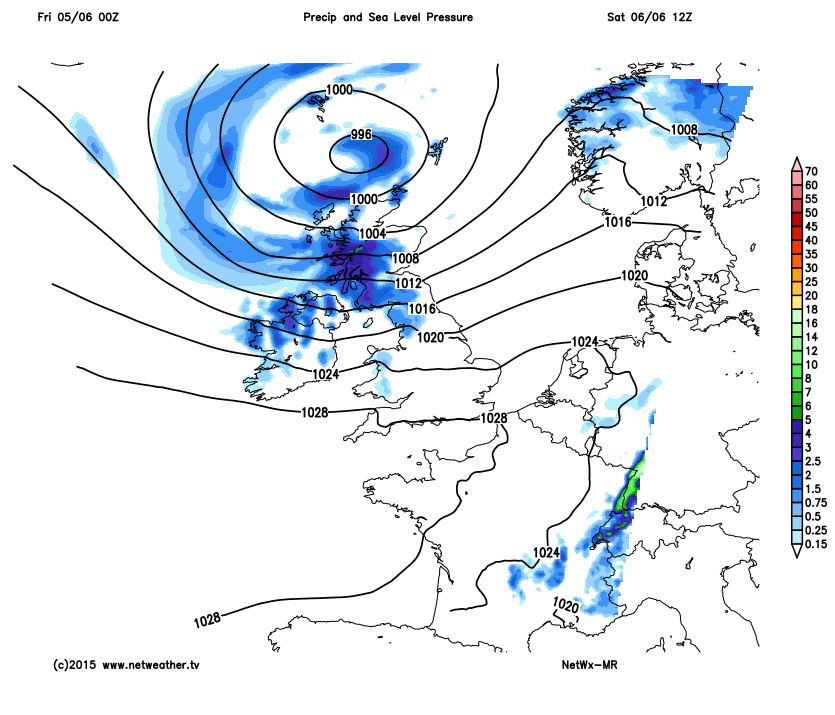 Another cool night and the winds begin to ease, although it stays windy across Scotland on Sunday with a fresh W then NW wind. With lighter winds N.Ireland, England and Wales will feel a bit warmer on Sunday and there will be a lot of dry and bright weather about.

Next week high pressure builds and there should be a lot of dry and bright weather about. Nothing too warm though and still some chilly nights