It has been cold and foggy for much of England with temperatures down to -9C to start the week. Further north, there is mild air and temperatures will rise for more of the UK on Wednesday.

This week's weather is rather slow-moving. There is lingering cold air over SE Britain which means fog and frost, even freezing fog in the forecast again. The winds will be very light here too. High pressure reaches over England and Wales, extending from Denmark early in the week but then will be centred out in the Atlantic. Accompanying this shift, a north-westerly flow will sweep around the top of the high pressure, pushing a cold front southwards on Wednesday and another frontal system down through the UK later this week. 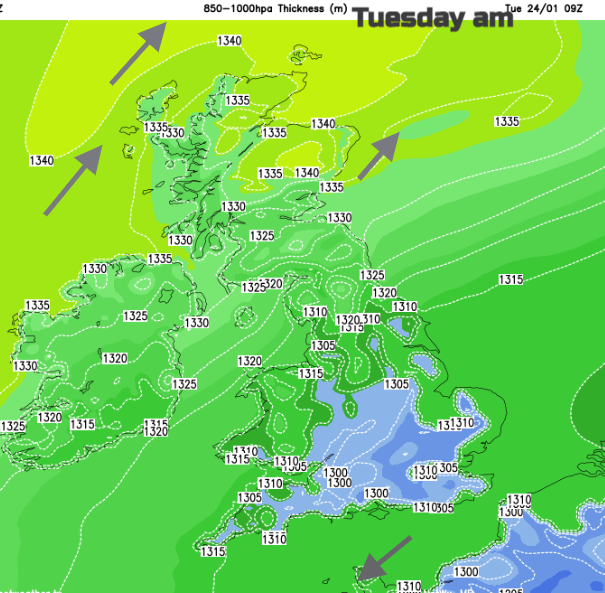 These fronts will bring more cloud but any rain will be patchy as it comes up against the anticyclone. 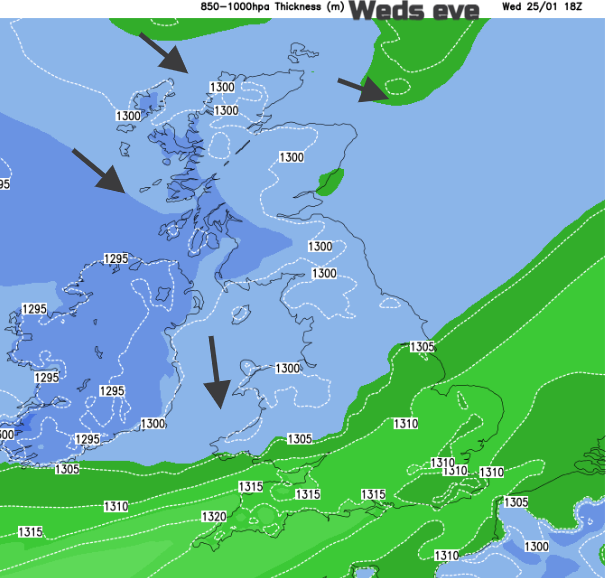 It has been very cold for inland southern England to start the working week. Heathrow had its coldest January night since 1987, down to -8.4C and Suffolk saw temperatures down to -9.5C. It is the comparison to northern parts which is strange. Northern Scotland started the day at +9C around the coasts and Northern Ireland was mild too. By mid-afternoon, Highland Scotland had reached 12.1C as parts of Surrey remained at barely above freezing. 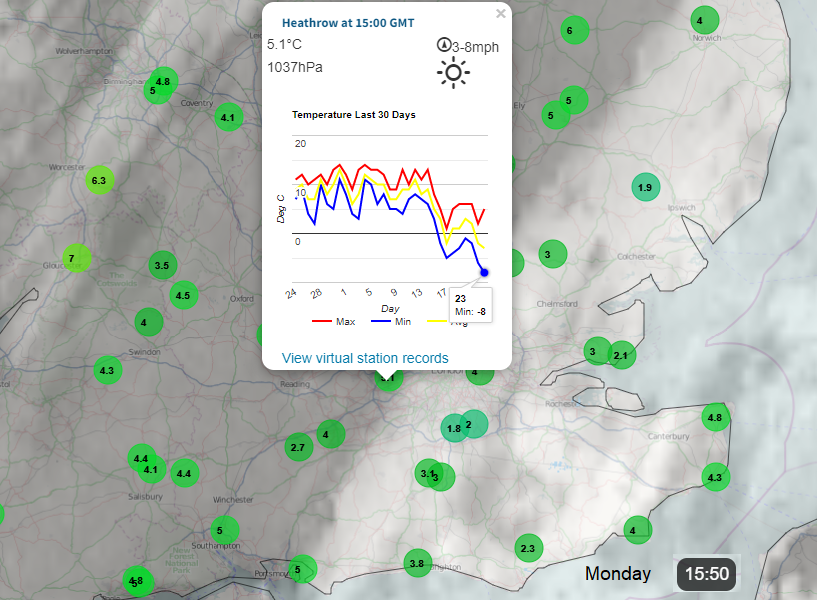 Overall, there will be a lot of steady, dry weather with variable amounts of cloud. The far southeast of England had kept its low cloud on Monday, aiding the cold feel to things. The ongoing chill and wider energy situation has led to the first Demand Flexibility Service session, where certain customers are asked to adjust their energy usage in a specified time frame.

Temperatures in England and Wales will edge up a bit this week, Cold again on Tuesday but much milder on Wednesday. Then widely 6 to 8C for Thursday and Friday. Monday night and Tuesday night will be cold with more fog to watch out for. 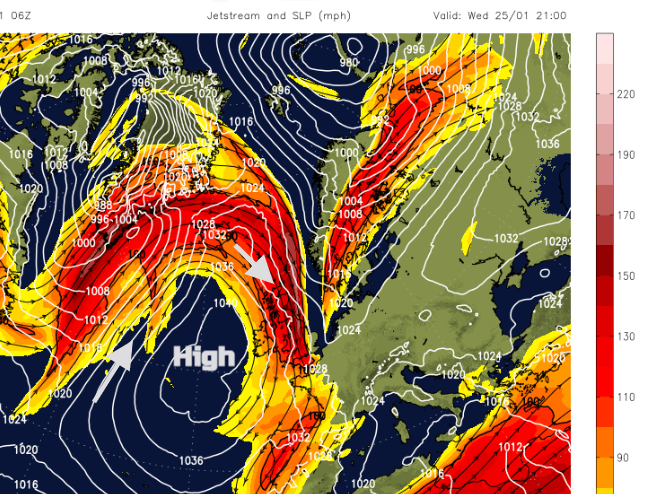 The Jetstream has moved further north on Monday and pushes most of the low centres by Iceland or towards northern Scandinavia. A large meander midweek aids the cold front heading southwards and the high pressure almost topples in behind.

Behind this, colder air feeds in but it has moved all the way around the high, it is not coming straight down from the Arctic. It will feel cold in the brisk north to northwest winds and there will be wintry showers on the breeze. These will mainly affect the NW Highlands with snow over the mountains. Glasgow starts the week around 9C but will cool down to 5C by Thursday. Belfast also sees temperatures dip away after 10C to start the week but sunshine on Thursday could rally the values. Behind the main frontal rain band on Wednesday there could be a bit of snow falling over the tops of the  Pennines, the Peak District and North York Moors as it clears to the southeast. London will see temperatures edging up a little but it will take some sunny spells to make a real difference. Hopefully by Thursday. Cardiff should see temperatures rise to around 8C by the middle of the week. 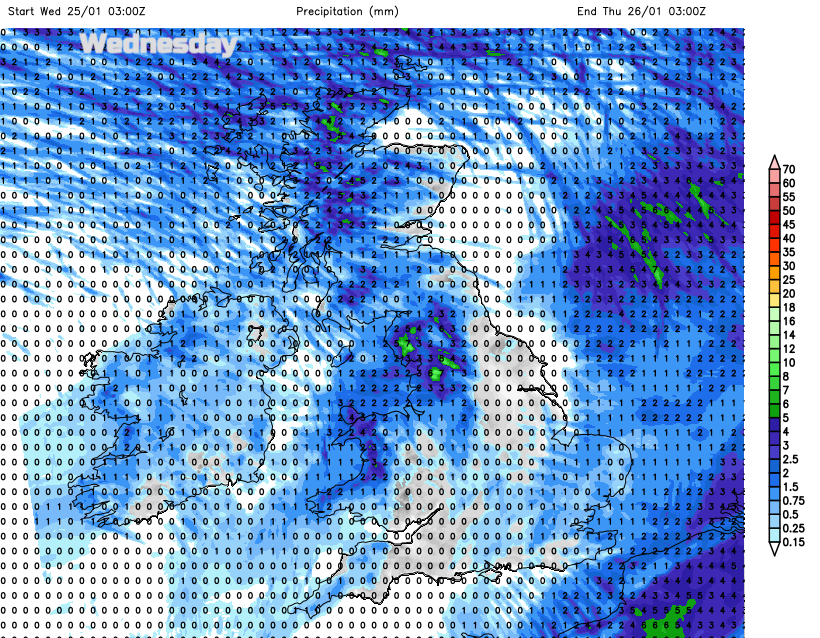 Earlier in the week there will be bright spells, particularly in the east and in the settled weather on Tuesday. Later in the week as the winds shift, low cloud looks to be drawn in off the North Sea and the northerly wind will make it feel colder. It will be western Britain, Northern Ireland and the Central Belt seeing more in the way of brightness.

It will be a strange week, cold in the south but mild for a time in the north. Then a flip with a nippy north wind for eastern Britain. 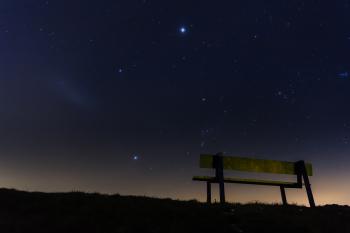 Week Ahead - cloud may hamper seeing the Green Comet, dry for the south, unsettled & windy north 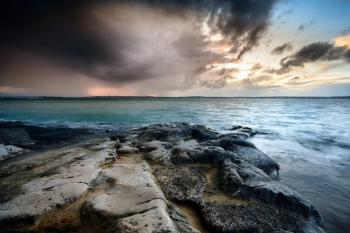