Cold and snowy weather in December has been rare in recent times, but after a relatively chilly and often cloudy weekend, next week could see that change. 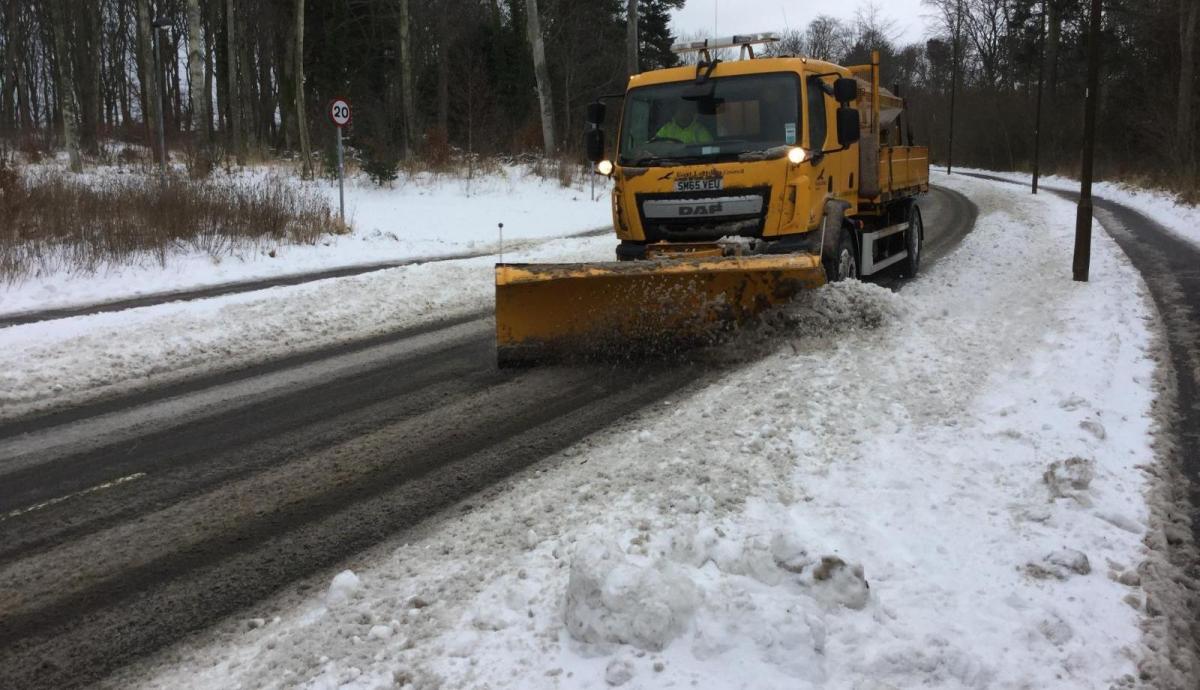 It is a while since we last had a cold and snowy December. December 2017 had a rather wintry spell in the second week with significant snowfalls in many parts of the UK, and there was a widespread snowfall in Scotland and northern England on the 29th, but apart from that, we have to go back to the record-breaking cold December of 2010.

There are still no guarantees over the duration of the upcoming cold weather, as some recent model runs have been quick to break down the cold by around the 11th December, although many other runs have been prolonging it until at least the middle of the month. However, it is increasingly likely that we will see much colder air move down from the north on Wednesday and Thursday of next week (7-8 December), with the potential for there to be snow at low elevations in some parts of the UK. Where and when is open to question, but the usual areas close to north and east-facing coasts look like seeing wintry showers on Wednesday.

The UK is currently heading for its warmest calendar year on record. In the case of the long-running Central England Temperature series, the Met Office currently estimates that we will need a negative anomaly of over 3C relative to the 1961-90 average for the rest of the year to not break the record. This is a very tall order, especially in the current warmer climate, but there is a small possibility of us getting a cold enough December to prevent the record from being broken, should the upcoming cold weather sustain well into the second half of December.

Prior to the cold northerlies, Britain is currently experiencing easterly winds, but although it is currently very cold over much of Russia and Scandinavia, the wind direction is not bringing much of that cold air over the country, with some relatively mild air from south-eastern Europe getting into the air mass. 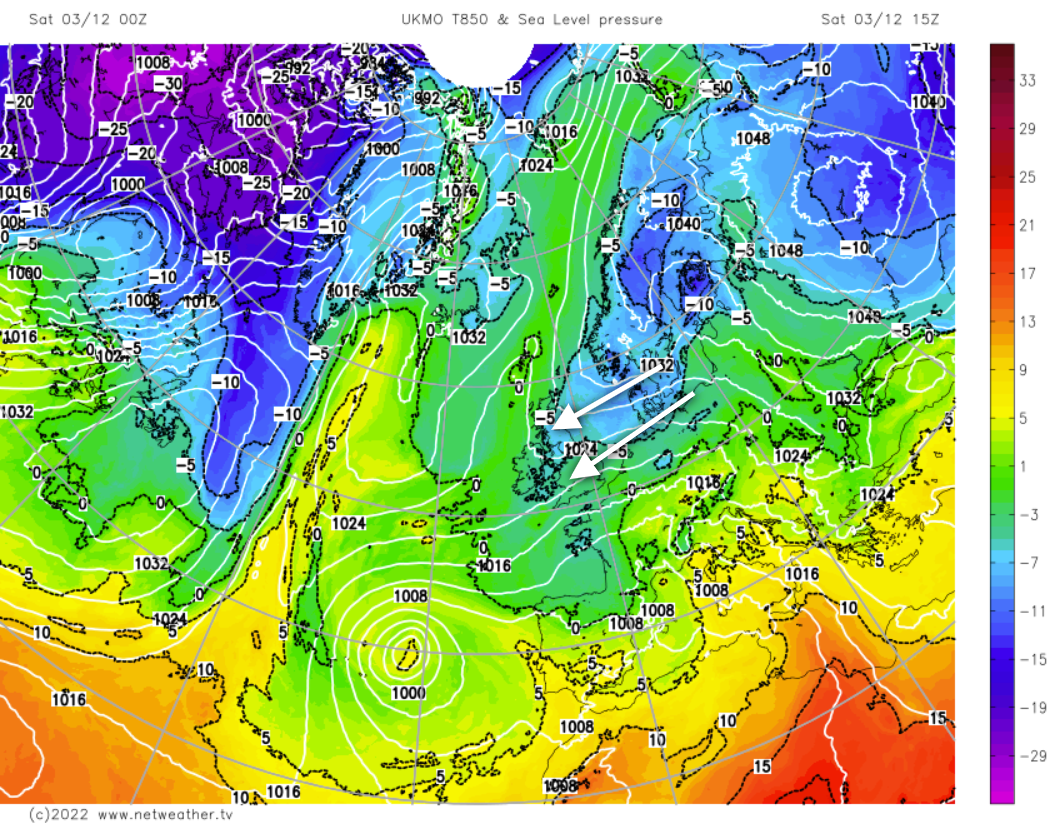 Saturday has begun overcast across southern England and in much of Scotland and Northern Ireland, but elsewhere we are seeing more sunshine than of late, with the easterlies bringing some showers in off the North Sea but also some sunny spells in between them.

The pattern looks set to continue for the rest of today, with much of Wales and north-west England having a mainly bright or sunny day with just isolated showers, while north-east England and Lincolnshire will have a mix of sunshine and relatively frequent showers. Showers will be predominantly of rain, but sleet and snow are possible on high ground, albeit only on the higher hills (above about 500m). Further south, dry cloudy weather will dominate, though some sunshine will come through, particularly to the west of high ground. Some persistent light rain will develop widely in north-west Scotland. Temperatures will reach a maximum of between 6 and 8C for most of the country. 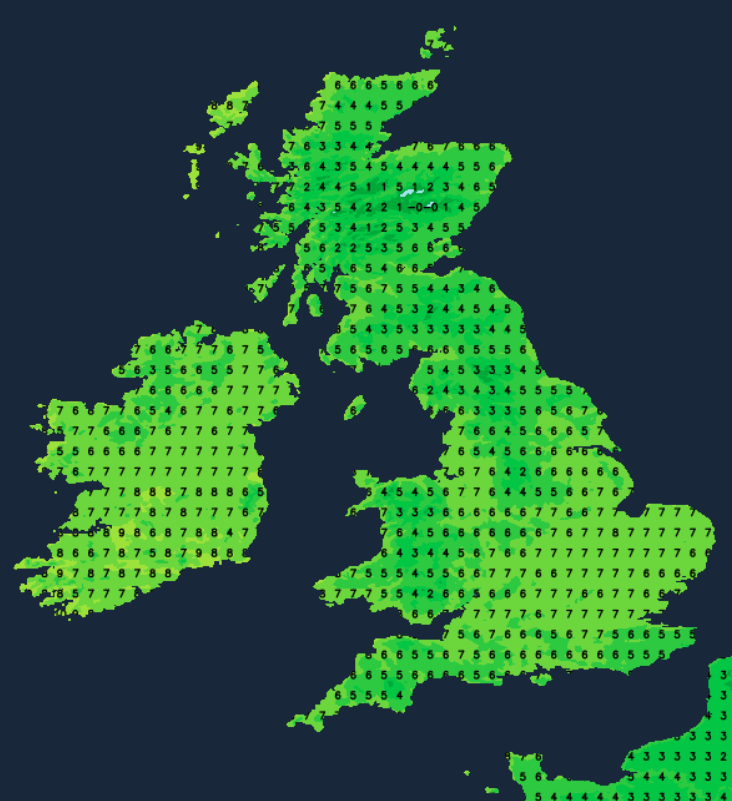 Overnight, Scotland will join the Midlands, Wales and northern England in having clear spells and showers, with most of the showers in the east. It will remain cloudy in the south of England. Temperatures will mostly fall no lower than 2 to 4C, but in sheltered parts of western Scotland and north-west England they will drop close to freezing, resulting in a frost. Showers will turn wintry generally over the Pennines and the Scottish Highlands but will continue to fall predominantly as rain at low levels.

Sunday looks set to remain showery in Scotland, northern England, Wales and the Midlands, with most of the showers in the east, while turning increasingly cloudy from the east. Sunshine and scattered showers are forecast for Northern Ireland, with most of any showers in the east and south. Southern England will hang on to predominantly dry cloudy weather, with some sunny breaks for the south-west. It will be colder, with top temperatures generally around 5 or 6C.

Monday looks like being another mainly cloudy day with some showers in the east, while Tuesday will be brighter, with showers becoming mainly confined to eastern coastal areas. Temperatures on Monday and Tuesday will still be relatively mild, reaching 5 to 7C in most areas. It is from Wednesday that we can expect much colder air to come down from the north, with any showers turning increasingly wintry at low levels.