A look at the UK weather this coming weekend. A cold east wind with a good deal of cloud. However any snow will be over the hills, with icy rain in places.

This week’s weather continues to be steady and rather quiet. There is low cloud and fog, making some parts rather dreary and cold. Other areas stay in the cheery sunshine but those clear skies allow a frost by night and a chilly start. The weekend does see an easterly wind setting in but any snow will be confined to the hill tops. 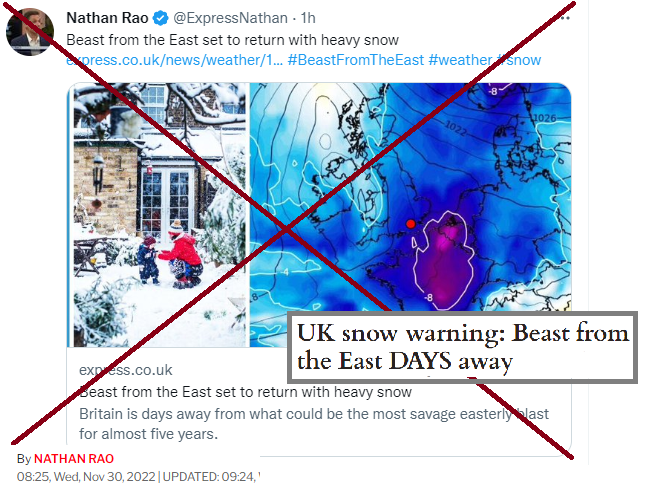 It seems we are back into 'absurd snow claims' territory with a disappointing article in the Daily Express. “DAYS away!” Not specifying how many days. There is just a colder easterly flow anchored by high pressure over Scandinavia. It will be early December so we should expect cold weather, even a few wintry bits. The last Beast from the East was at the very end of February 2018, which was late winter, not the first few days. BFTE takes a gradual process, a rare setup and can be forecast in advance. Scaremongering is not helpful- to people worried about their heating costs now nor if there really was severe weather on the way in, say, a few weeks. People would just assume it was another false alarm. For this weekend, there is a chilly easterly flow with some icy rain and patchy hill snow. 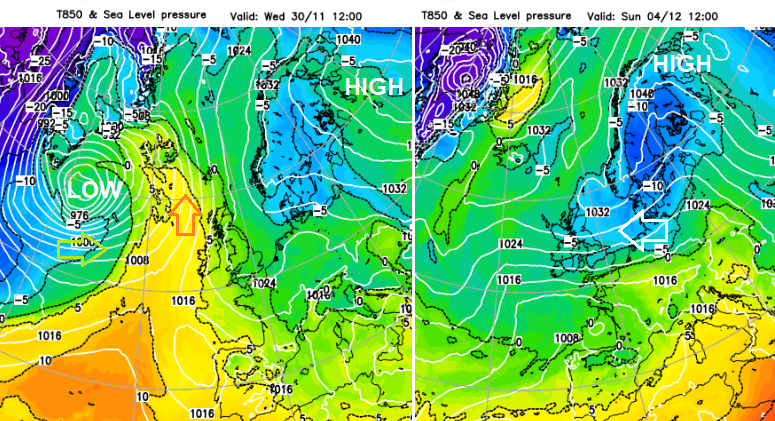 There are signs on some weather models for a flow of colder air from the north towards the UK. Next week high pressure builds over Greenland, there will be a low over the Baltic Sea and the Scandi High slips southeast over Russia. This set up will channel cold Arctic air towards the North Sea and UK, with snow showers for Scotland by the middle of next week. From the north. 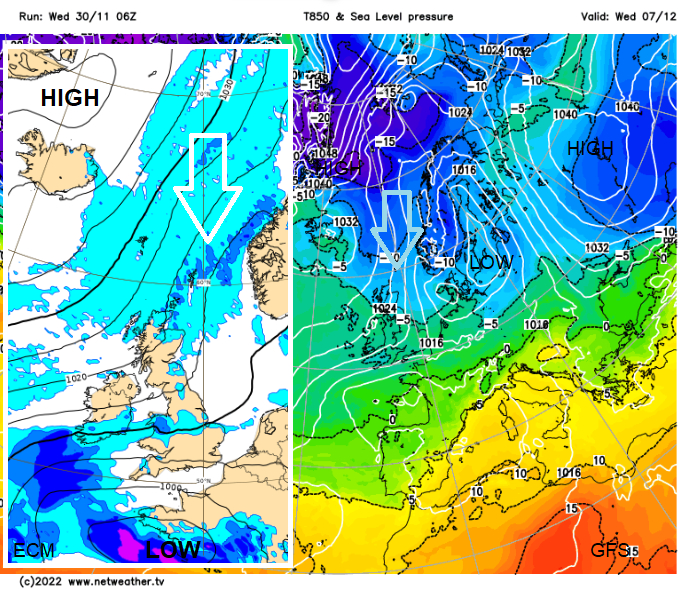 If you have plans to start the Christmas shopping this weekend or visit a Winter Wonderland there will be a lot of grey weather around. Often accompanied by a chilly breeze, you’ll need to wrap up warm, especially early in the day and after dark. For those staying at home and watching the football, this shift to colder air and more seasonal feel to things, might mean that the heating goes on a bit more. November was very mild but also very wet. December is looking different.

There will be more of a breeze will be picking up later on Friday. This will add to the cold feeling in the air but reduce the likelihood of fog, compared to early Friday when it will be dense in places. Western Britain and central Scotland will have light winds and temperatures will fall down near to zero during the evening. There will be a lot of low cloud and murk in this easterly flow. At times the cloud will be thick enough to give drizzle, even soaking rain.

More grey gloomy skies on Saturday. A weather front will brush the Western Isles bringing rain and a fresh southerly wind. This frontal band will throw cloud over Northern Ireland by Saturday afternoon and damp for the east coast in the breeze. Across Britain, the cloud will be thick enough to give some outbreaks of rain and this will be wintry over the eastern Pennines and Grampians. Also, the Cheviots and North York Moors but not amounting to much. Western areas of Britain will be more sheltered from the rain and other parts will stay mostly dry. The east wind will be noticeable for eastern and southern England. Temperatures on Saturday will widely be between 6 and 8 Celsius. 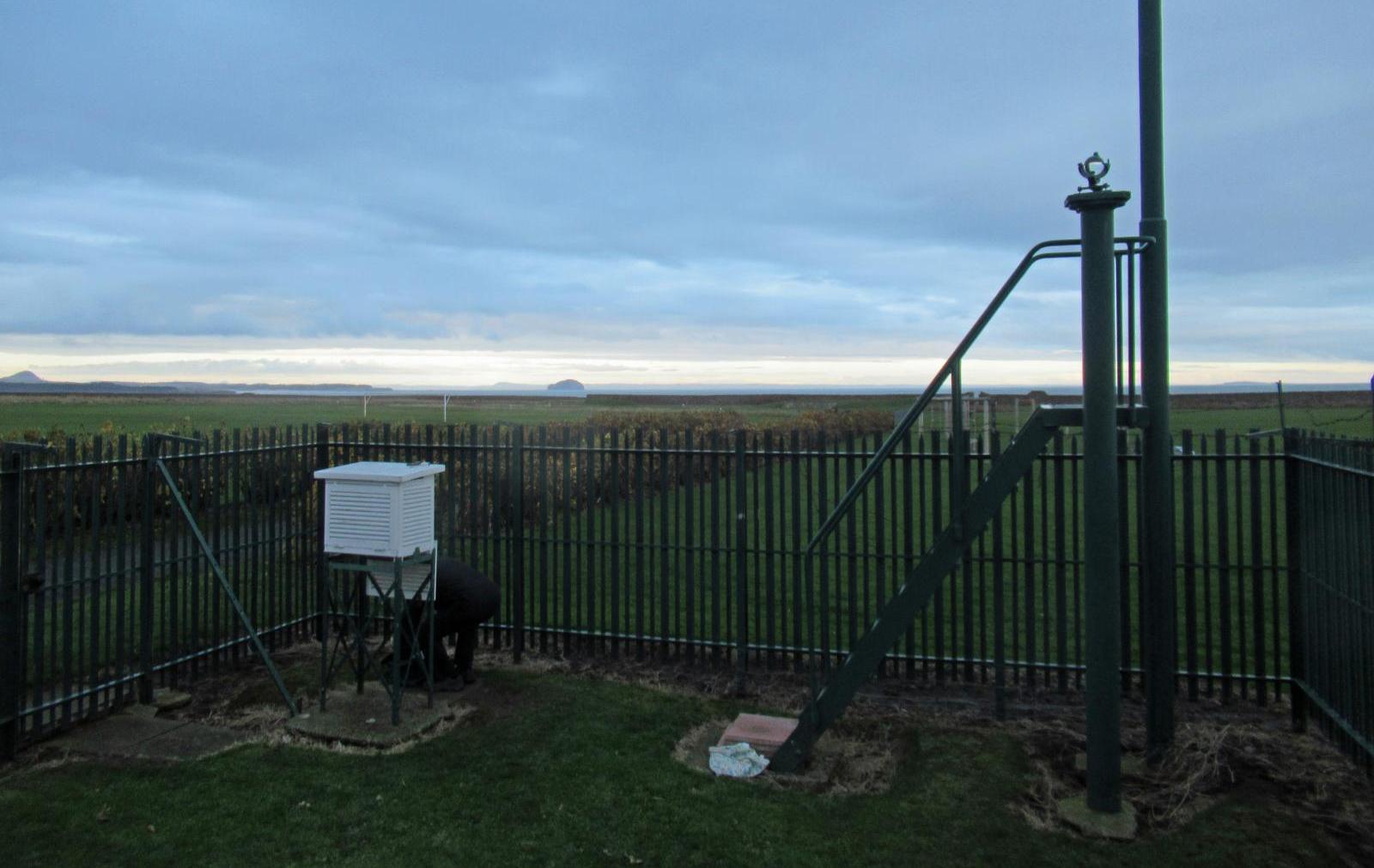 Overnight there could be more sleet and wet snow over the hills of eastern Britain and reaching the Pennines and Peak District. In some of the heavier bursts and the cold air of the early morning, there will be a white covering over the tops. Western areas again should see some brightness, even sunny spells as the east to northeast wind sets in. There will still be plenty of cloud coming in off the North Sea and reaching well across Britain and similarly across Northern Ireland. This thick cloud will bring rain in places and that will make the day feel cold and grim in the wind. Temperatures will be 5 to 7C. Other areas will just be grey and nippy. The brighter western parts will soon see a frost after dark to end the weekend.