Video with Jo Farrow. Light winds will accompany low cloud, fog and frost for the UK. Gradually a colder, easterly flow will make its presence felt this week but it doesn't necessarily mean snow.

December will begin on Thursday and there are signs of a change. The ongoing Atlantic domination which has brought bouts of wind and rain and kept a mild airflow over the UK will shift as a high pressure over Scandinavia feeds an east wind our way. This will be colder air and will feel chilly at times. It is not ‘Beast from the East’ cold which came at the end of February, a completely different time of year. It doesn’t look snow laden before anyone gets too excited, just a covering for the mountain tops and frosty nights. 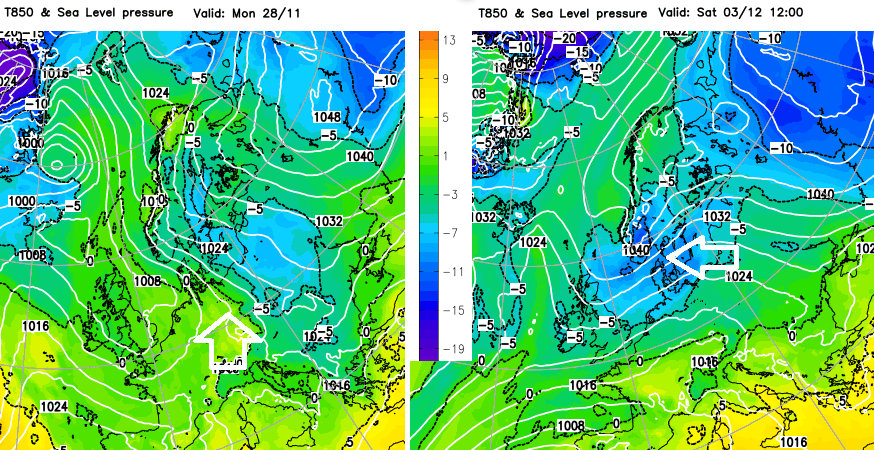 This week we see the change over. The winds are often light which will allow fog and frost to form. There will be areas of low cloud giving grey skies and a gloomy feel to the still weather as the blustery showers in the south and west on Monday soon fade. The week is rather quiet in a way as we lose the westerly push and wait for the easterly flow to take hold. It will mostly be dry but the easterly flow will bring a lot of cloud cover and this will add to the colder, damp feel to the week, even if the winds are light. 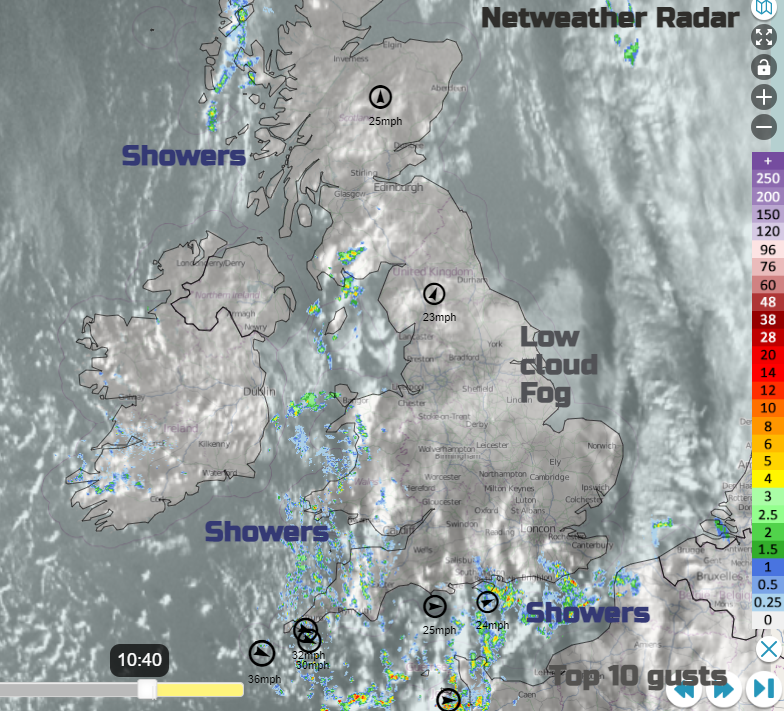 Monday's speckling of showers fades somewhat during the day. It has been western coasts and the English Channel seeing most of the showers. A moderate NW wind has been a feature of the day for Pembrokeshire, north Devon and Cornwall. The light winds elsewhere allowed temperatures to fall well down into single figures and there has been low cloud and fog lingering over Yorkshire, Lincolnshire and the East Midlands.

Overnight will see more low cloud and fog forming and it could be dense in places for the Tuesday morning rush hour. This will affect the temperatures by day and night. Overnight any clear, rural areas will see temperatures around or just below zero and by day a range of 2C to 10C depending on the fog clearance. Areas that are more likely to see fine, sunny weather include northern Britain with fog more likely through the Central Belt and over SW Scotland. For Northern Ireland for northern and eastern counties. Wales, away from Powys and much SW England.

There will just be one or two showers lurking by Kent through Tuesday but overall, a quiet day. An Atlantic frontal system begins to push in to Ireland on Tuesday night and this will bring patchy rain. There will be milder air and southerly wind as a frost forms for NE Britain The rain band gathers itself on Wednesday over Northern Ireland, although there is some uncertainty about its push eastwards. The Scandi high will just be edging its influence over the UK and it might keep the frontal rain from reaching western Scotland midweek. 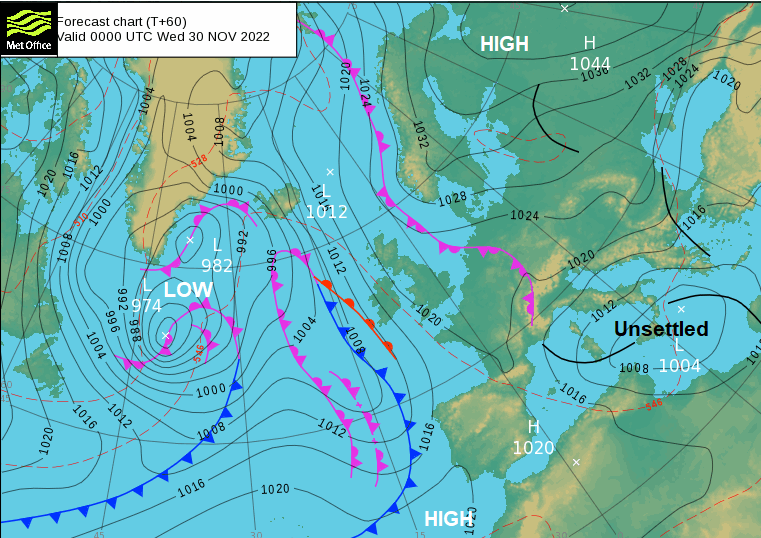 Pressure begins to rise over the UK under the influence of conditions to the northeast. Colder conditions with an east or north wind take hold and overnight temperatures begin to dip. There will be areas of low cloud off the North Sea but also clear spells with frost and fog.

For Friday and Saturday, the easterly flow looks more noticeable. So, a lot of dry weather but with plenty of gloomy cloud cover and most of the breaks will be for western counties. It will feel cold in the breeze with a dampness along North Sea coasts. There will be some wintry showers in the flow for the Grampians, the North York Moors even reaching the Cheviots and the eastern Pennines.

That east wind will give quite a chill by the weekend and we haven’t really been used to that so far.