High pressure builds in across the west for the Bank Holiday Weekend, so mostly dry and bright or sunny, though a few isolated showers are possible Sunday and Monday. Feeling cooler though in a northerly breeze, with some chilly nights. 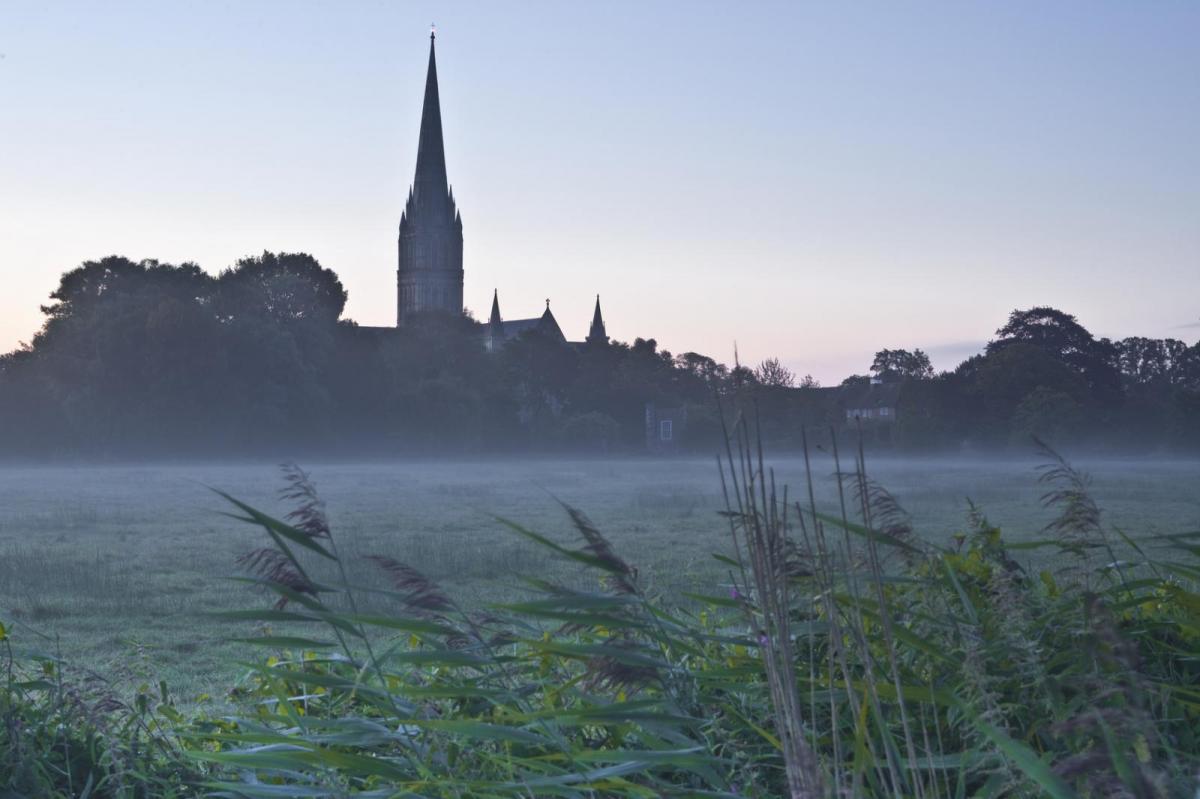 The weather has been fairly changeable and often unsettled since the start of September, last week saw heavy showers and thunderstorms, thank to low pressure nearby, Sunday saw rain spread in across northern and western areas before spreading to central areas on Monday. Yesterday it was the turn of the far south to see some rain.

But from today, high pressure looks set to build in across the west for the rest week and through the long Bank Holiday Weekend, bringing a mostly dry outlook, though with a risk of occasional showers in the east. However, it is set to turn cooler by day and especially at night, as a northerly breeze develops, with a risk of ground frost over the weekend, even sheltered rural areas in the south.

High pressure builds in across the west for the rest of this week and through the Bank Holiday Weekend:

Today will be dry for most, away from the far south – where there’ll be some rain for a time before mostly clearing by midday. So, it should be dry and sunny when the Queen’s coffin departs Buckingham Palace at 2.22pm and travels in a ceremonial procession to Westminster Hall. For Thursday and Friday, a brisk northerly breeze will set in, which will bring cloudier skies and some well-scattered showers across eastern areas, some sunny spells in between, but many places could stay dry in the east. But the best chance of sunshine and staying dry across the west. The northerly breeze will mean temperatures not as high as recently by day while nights will turn noticeably chilly, especially in the north – where there could be a touch of ground frost in sheltered areas.

Becoming cold at night later this week and over the weekend, these are Friday night's lows for ground temperatures, suggesting a ground frost possible in rural areas 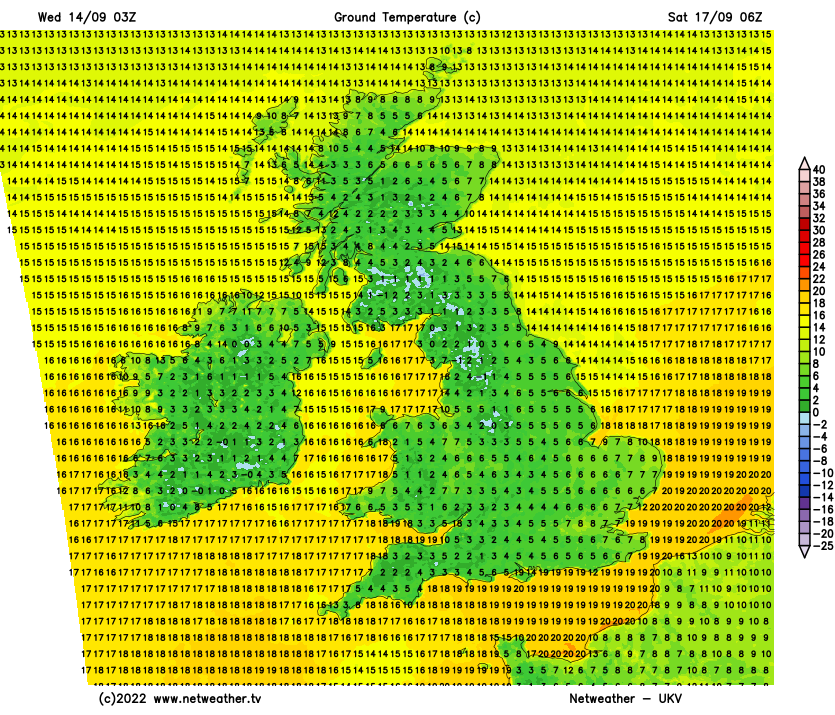 High to the west will build a little further east across the UK on Saturday and Sunday, so showers will tend to become confined to North Sea coasts of England and Scotland on Saturday. A cold start on Saturday though, a ground frost is possible in rural areas, especially in the north, but even in the south towards the west. Most places will remain dry and warm up quickly in sunny spells, though it looks to turn cloudier across Scotland, with some rain arriving in the north in the afternoon. Still a northerly breeze, brisk towards the east, so cooler than recently, temperatures reaching mid-to-high teens at best.

High pressure will be in charge over the long weekend, so most dry, but a few showers still possible and it will feel cool, chilly at night

Cold again Saturday night in the south, wiith a risk of rural ground frost, more in the way of cloud in the north will prevent temperatures getting as low, but still dipping into single figures. A bright start in the south, but cloudier skies in the north with a few showers will spread south across all parts, followed by brighter and drier conditions from the north in the afternoon, cloud perhaps lingering across the south into the evening. Temperatures reaching 14-18C at best.

The Bank Holiday Monday for the State Funeral of Queen Elizabeth II is looking mostly dry and bright or sunny. More importantly for London it’s looking dry for the Queen’s State Funeral, as the procession carries the Queen’s coffin from the Palace of Westminster to Westminster Abbey for the funeral, before travelling in procession after the funeral to Wellington Arch, then from there to Windsor. There will be a few isolated showers developing across the UK, but with high pressure building in across the UK from the west, for most it will remain dry.

Mostly dry for Bank Holiday Monday, perhaps cloudier with a few showers in the north, but the southeast and London looking dry and sunny for the Queen's Funeral 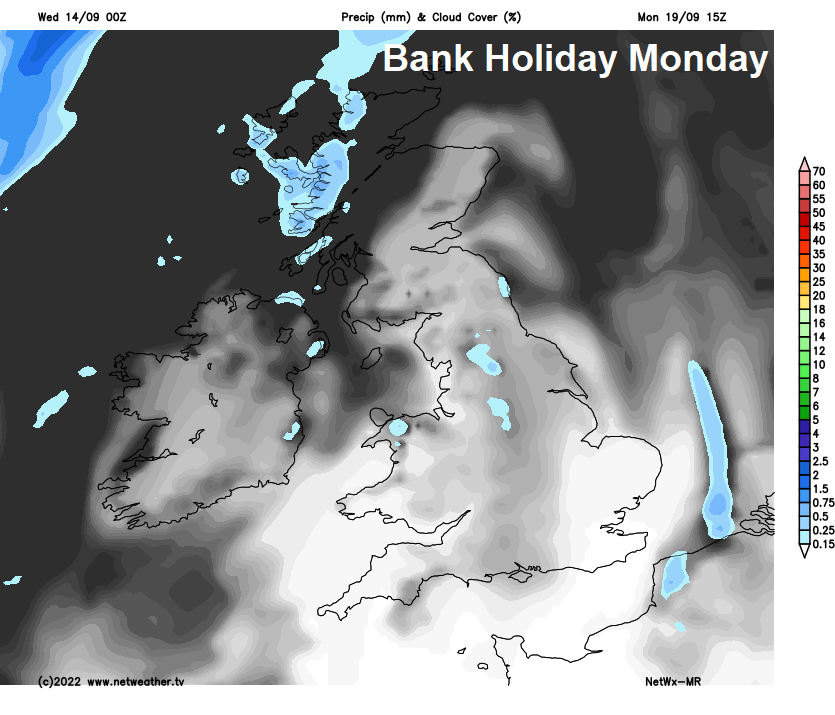 There is some uncertainty how long high pressure will hang around over the UK next week. Most recent runs tend to suggest high pressure will eventually either sink south or drift east by the end of the week, with an upper trough emerging over the NW Atlantic this weekend moving east and arriving to the northwest or west at the end of next week. So, we are looking at a mostly dry week next week, with sunny days and temperatures close to average, but some cool nights. Possibility of rain moving in from the Atlantic later in the week, but low confidence on this for now.