There is a fresher feel to the UK weather, compared to a week ago. Showers will blow in from the west over the weekend but fine for many. Temperatures will lift a bit next week

Temperatures are down now with a fresher feel to the air but still strong sunshine today. The westerly wind will continue to bring showers in off the Atlantic and there is a fading weather front over SE Britain with more cloud here. Thinking back just a week, southern Britain was under a second Extreme Heat warning with very warm nights and daytime temperatures into the low to mid 30sC This weekend, the top temperatures will be 18 to 26C

The longer-range weekly anomaly charts from the ECM model show warmer than average for the rest of August across most of the UK. Just the far north of Scotland and Scottish Islands seeing average temperatures. Next week (overall) looks very warm for SE/southern England but not heatwave hot. 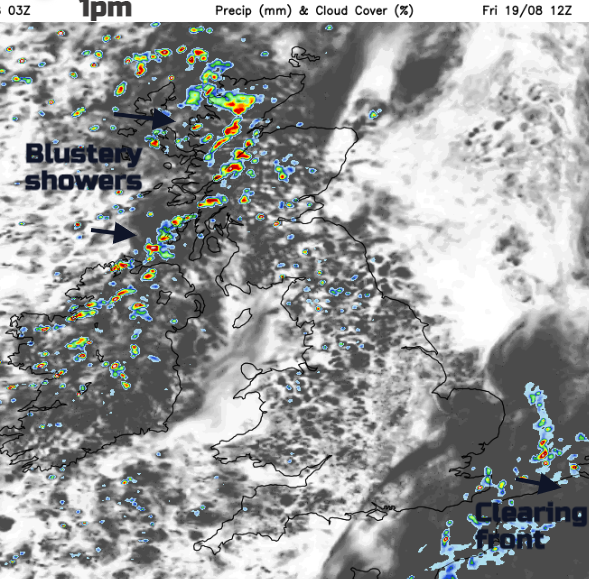 Today the heaviest showers will move over Northern Ireland and Scotland this morning, a scattering of blustery showers affecting NW England too by lunchtime and crossing the Pennines, a few for north Wales into the afternoon. Many places will have a fine, dry and bright Friday.

The evening becomes more settled, dry with light winds, a lull before a spell of heavy showery rain reaches western Scotland and Northern Ireland before dawn. The southerly winds will strengthen and the sound of the rain may wake people as the lively convection moves through. A spell of gusty weather with sudden heavy downpours will move across Scotland and Northern Ireland during Saturday morning. 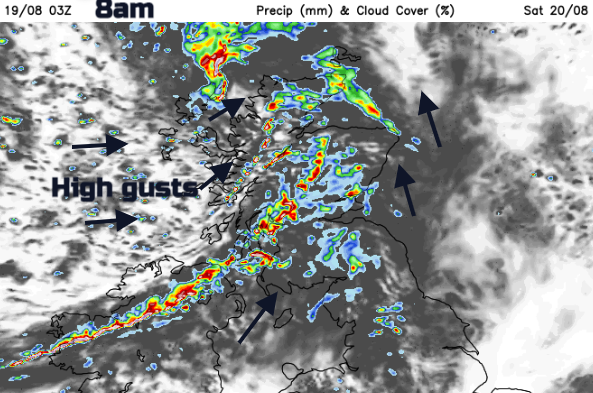 Watch its progress on the Netweather Radar tomorrow and then should reach the Isle of Man and the far north of England early afternoon.  The feature looks to slow down and so could bring some very wet weather, with surface water issues during Saturday afternoon over northern England. Ahead of that more dry weather until Sunday night when rain pushes in from the west for Wales then more of England. 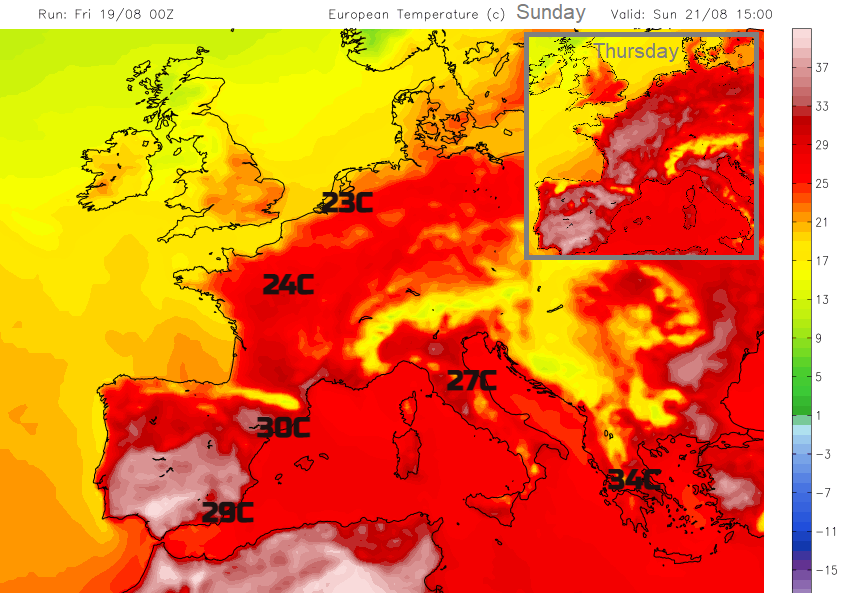 Dry weather, high fire risk and drought conditions continue for a good deal of Europe. Thunderstorms, torrential rain and hail affected Barcelona and the same convective system moved across to Italy and then Austria with incredible lightning yet deadly rain and flooding. Finland has seen a very hot August, as have the Baltic states. Temperatures have tipped into 30sC and there have been tropical nights, when the temperatures stay over 20C. This is most unusual for mid-August this far north. There have also been tremendous thunderstorms, even more energetic than those seen in parts of the UK this week. 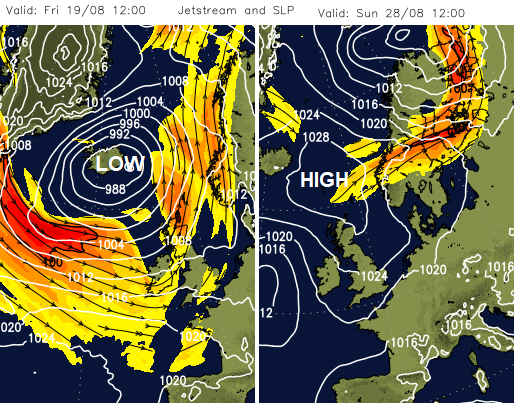 For the rest of this week and at the weekend there will be low pressures whizzing in from the Atlantic and seemingly lined up to pass over the UK. Pressure slowly rises over the UK next week This will bring drier than average weather to NW UK. The Atlantic jet helps various low pressures affect our UK weather. It has been windy for Scotland and Northern Ireland midweek and these low pressures will keep the blustery weather into early next week. Things settle as the jet weakens and high pressure tries to build. That could bring more settled weather for the late August Bank Holiday weekend. Signs of fine weather, light winds, some warmth but not a guarantee of completely dry weather.