Heatwave will reach its peak today, with temperatures perhaps reaching 37C in southern England. Hot again Sunday before heat eases and threat of thundery downpours increases as we head through early next week, cooler for all by mid-week. 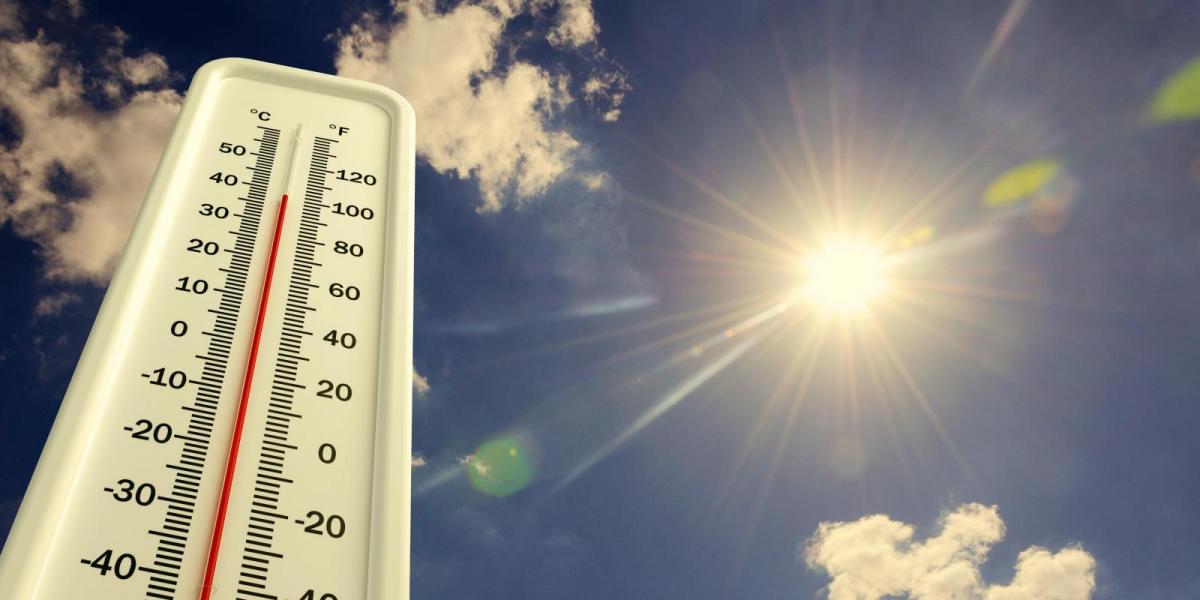 It seems like the summer of heat that will never end. Weeks of no rain, brown grass across large parts of the UK, temperatures effortlessly exceeding 30C with now the second heatwave of the summer where every day is like living in southern California with endless days of blue skies. Ireland provisionally saw it’s warmest August day ever yesterday, with highest temperature of 31.7C setting a new record. Yesterday's highest UK temperature was 34.5C reached at Wiggonholt in West Sussex. Today possibly reaching 37C somewhere, such a temperature hadn’t been achieved before 1990, but recent years it’s been reached or exceeded with ease a number of times.

Goes without saying that it’s been very dry across parts of southern and eastern England over the last few months, with some places not seeing any rain for 40 days or more. Odiham in Hampshire last saw rain on 30th June, the Isle of Wight last saw rain on the 3rd July. Satellite photos over the last few days have graphically highlighted how parched the land is across much of southern and eastern Britain. So, with such a long period without rain, with only February this year returning above average rainfall, it is no surprise that a drought was declared by the Environment Agency on Friday across eight areas of England. These eight areas include: Devon and Cornwall, Solent and South Downs, Kent and south London, Hertfordshire and north London, East Anglia, Thames, Lincolnshire and Northamptonshire, and the east Midlands. 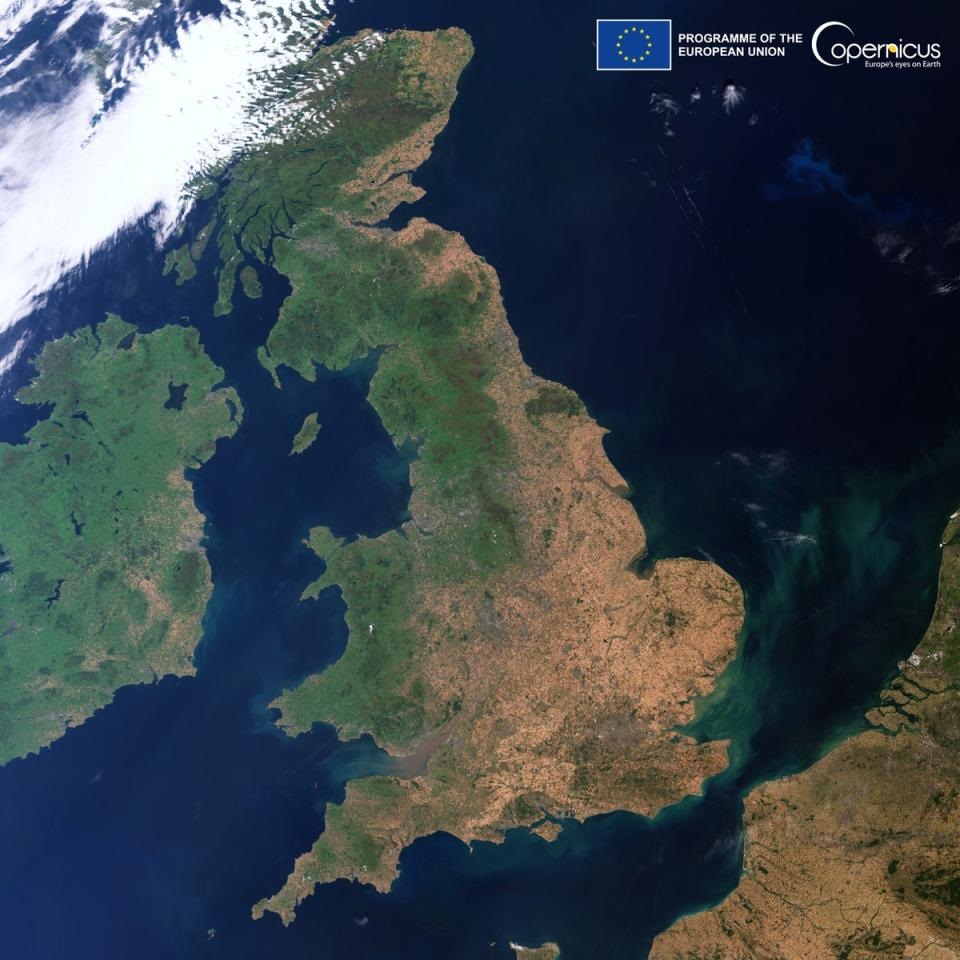 But finally, there looks to be some rain on the way next week for many areas. But the rain will most likely fall from heavy and thundery downpours, so not only will they be hit and miss, with not everywhere catching one, the heavy downpours may cause flash-flooding as the ground will be baked too hard to absorb much if any water. It will take a while to rid of the heat and humidity across the southeast into next week. But eventually cooler air will push in across all parts on Wednesday, with temperatures returning to near average values for the time of year across most parts.

Cooling off by the middle of next week

Peak of the heatwave today

For now, we have the peak of another extreme heatwave to endure today. After a warm night, with temperatures falling no lower than high teens and low 20s, temperatures will climb in the unbroken sunshine and are likely to reach the low to mid-30s degree centigrade widely across England and Wales. Perhaps peaking at 36-37C across southern England. Hence the Amber Extreme Heat Warning in force until late on Sunday, covering much of England south of the Pennines along with parts of south and east Wales. 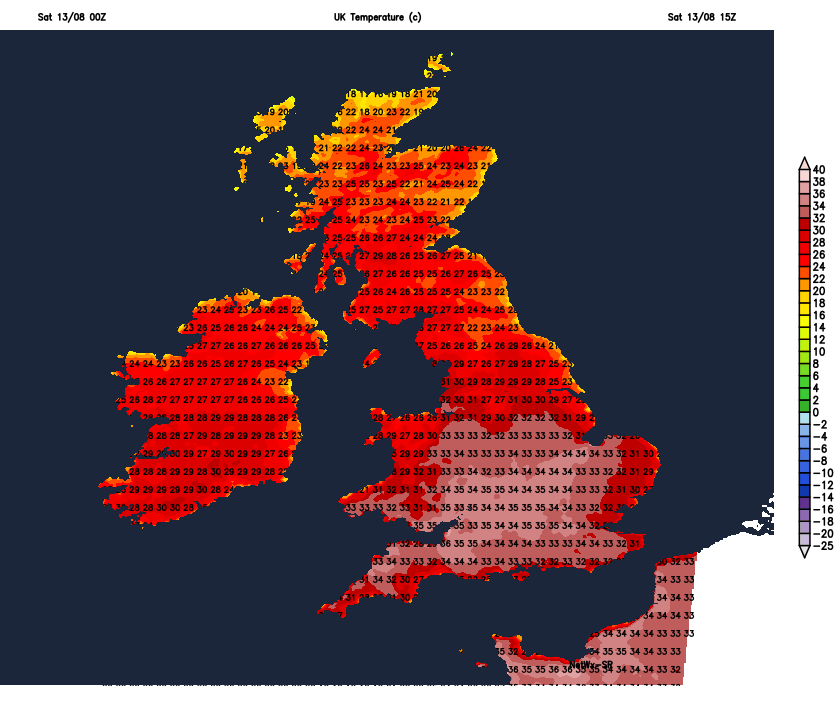 There will be some mist and low cloud or haar along northeastern coasts this morning, but this should burn back offshore with much of the UK seeing unbroken blue skies on Saturday, a good day to check visible satellite images to see the extent of parched brown land! The exception, as has been the case recently, will be a cloudier far north and northwest of Scotland.

Still hot on Sunday across much of England and east Wales, with temperatures in the sunshine reaching the low to mid-30s. However, we will see the start of the change to more unsettled conditions in the week ahead developing across Scotland, with some thunderstorms developing towards the west through the afternoon, while west Wales and N. Ireland could see more in the way of cloud and some isolated thunderstorms develop too. 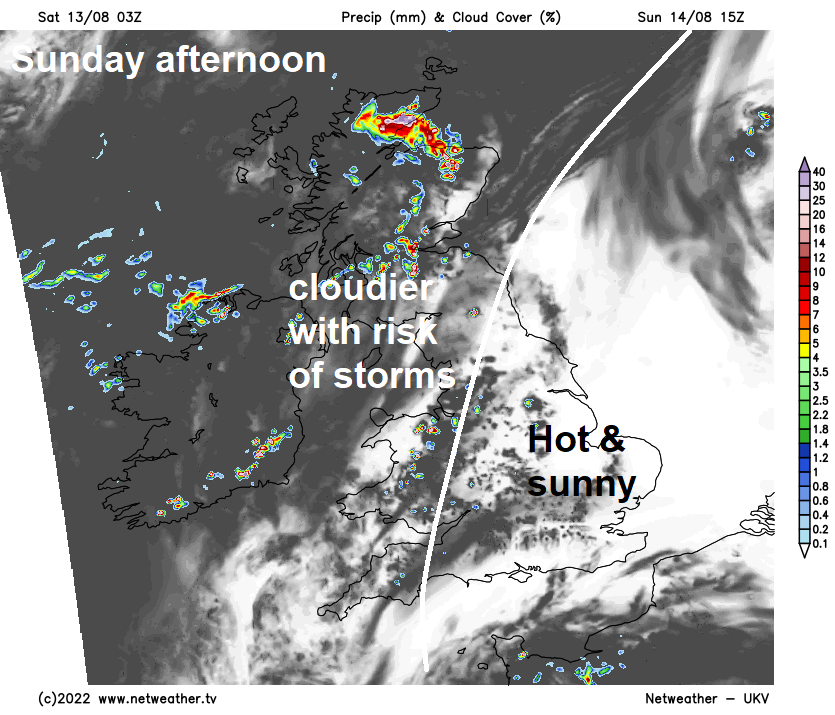 Monday is looking mostly dry, sunny, hot and increasingly humid for southern, central and eastern England too. But across northern and western areas of Britain it will likely be less hot with more in the way of cloud and some heavy showers or thunderstorms breaking out through the day.

Slow-moving heavy showers or thunderstorms developing more widespread across England and Wales on Tuesday, with a risk of localised flooding. Scotland and N. Ireland turning drier and cooler through the day, as northerly wind develops here.

Wednesday looks to see showers and thunderstorms become increasingly confined to southern areas through the day, drier and sunnier across the north, but turning cooler across all parts with a north or northeasterly breeze. More of a westerly flow developing on Thursday and Friday, though some uncertainty for later in the week on rainfall. Thursday could be looking dry, though a few showers in the west. Friday more likely to see some rain spreading east.