A new month but the showers just keep on coming. Looking warmer next week

It’s the first of July, the second month of meteorological summer. We have one low pressure waiting to swing in from the Atlantic during Friday night as another gets comfortable away to the north of Scotland for the weekend. Both of these will bring showers, even some blustery winds but then eyes move to the Azores high. For next week, pressure will be rising, slowly, from the southwest. It draws down a cool NW breeze for a time, so by night temperatures will fall into single figures but gradually the shower threat fades. Then more of the UK becomes drier and bright with southeast Britain seeing the temperatures creep up into the mid 20s Celsius. NW Britain will continue to see showery rain into the middle of next week. Overall July 2022 looks to be warmer than average, as people begin to think about summer plans and school holidays start in some parts of the UK. 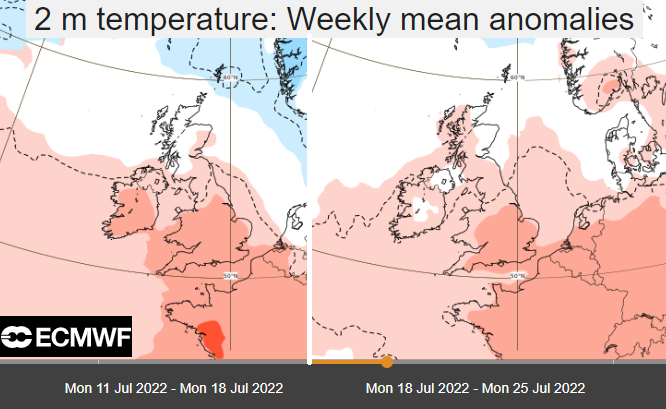 The ECMWF weekly anomaly charts at 2m show the air over western Europe being warmer than average next week (Spain, Portugal and France) and then extending through central Europe later in July (to Italy and Croatia). A theme for the coming weeks, not that every day will be hot here in the UK or even dry. The GFS model is less keen but still tips to slightly warmer than average for England and inland Wales for the first half of July. 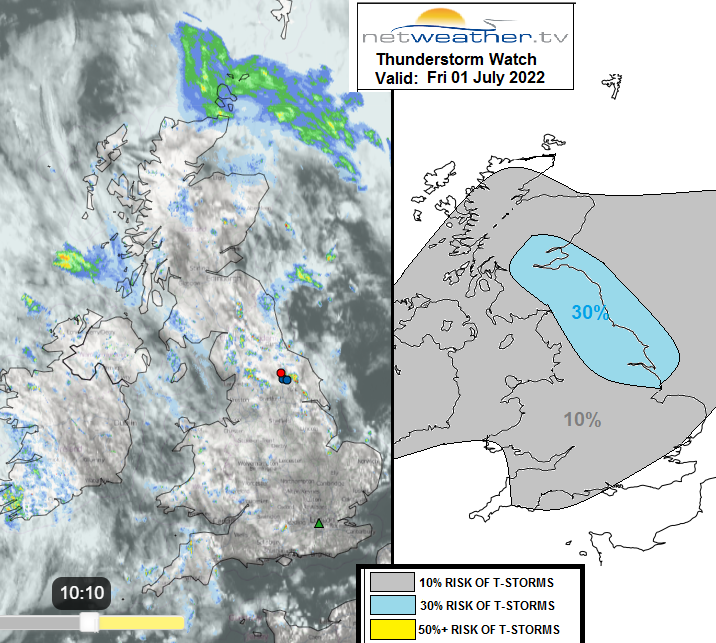 It is a mixed picture across the UK for Friday. Sunshine for SE England but rain over Aberdeenshire and Orkney. This line of rain pulls northwards to Shetland today.  Isolated, thundery showers continue over northern England with intense sharp downpours. Just beware of these today as for many parts the weather will be fair sometimes bright or with more cloud cover. Then a torrential downpour with surface water and spray, even a crack of lightning.

"Pool of colder mid-level temps associated with upper trough will be across Scotland and NE England this afternoon as trough clears NE, so here will see the steepest lapse rates / greatest CAPE during peak heating this afternoon – resulting in greatest chance for thunderstorms to develop amongst showers expected to develop widely across the UK today." Convective forecast

There will be a light breeze from the west or southwest with temperatures still only 15 to 22C and Saturday values look similar. 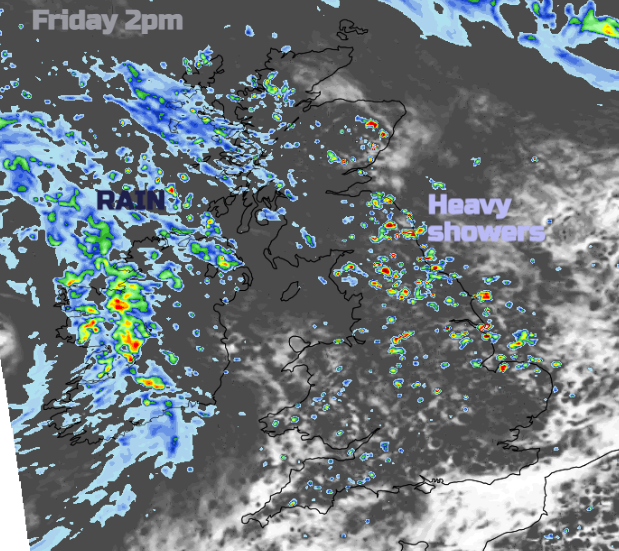 Heavy showers continue to break out through the middle of the day. Across a central swathe of Britain and then focusing on eastern Britain and the Pennines this afternoon. The frontal bands from the incoming low pressure will throw showery outbreaks of rain over western Scotland and gradually more persistent rain to Northern Ireland. This will reach NW Wales by Friday evening and then more of western Britain with some heavy bursts.

The frontal band will move from eastern Wales over England during Saturday morning. There will be a good deal of cloud with showery rain but it slows during the day and diminishes. It looks like Wimbledon should stay dry on Saturday, at least until early evening. Then we’ll have to keep an eye on the radar out west, as so often in week one. 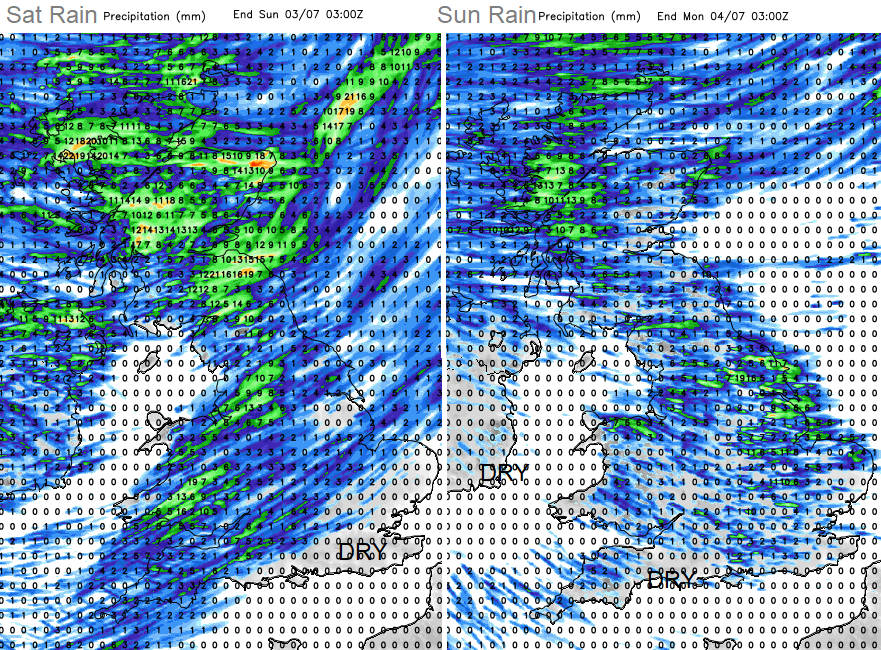 Swirling around Saturday’s low pressure there will be a peppering of heavy showers for Northern Ireland and northern Britain with areas of rain for northern Scotland. The skies clear overnight and the breeze eases as temperatures fall away.

Again, on Sunday there will be a scattering of showers. Not as heavy and with more gaps in between but still a mixed picture and a cooler westerly wind.

There are signs of warmth for next week with temperatures finally shifting from the teens into the twenties for more of the UK. The southern half of the UK looks to be drier, losing the showers but unsettled weather continues to feed in from the northwest.