Low pressure will be staying well in charge of the weather through the remainder of this week and into the weekend, keeping things unsettled with sunshine and showers the most common weather type. But, an old friend of UK Summer's -  the Azores high - is set to ridge our way next week, settling things down and bringing a return to more summer-like conditions. 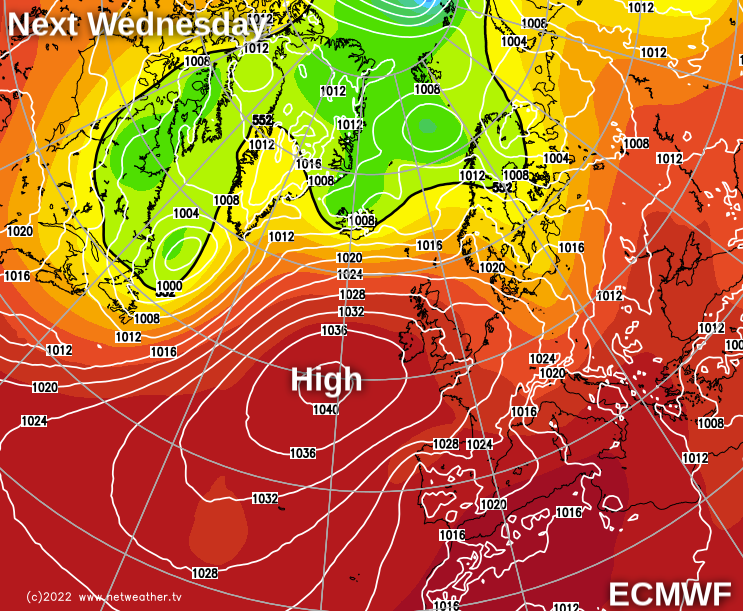 It's likely to be a relatively slow burn as the high starts to ridge towards the British Isles from Sunday onwards. Initially, it'll be the south of the country feeling the benefits as the showers die out, with the north of the country last to see that improvement during next week.

For more on the weather during next week and beyond through July, take a look at the month ahead forecast.

At shorter range, we are locked into a few more days of sunshine and showers. Today (Wednesday), will see them moving southwest to northeast, with one or two groups of them joining together across eastern England to start, and also through southern, central and eastern Scotland. Nowhere will be immune, but the southeast corner is likely to become mostly dry once this morning's bands have moved through, which bodes fairly well for Wimbledon.

Later in the day, a further batch of showers and perhaps thunderstorms are liable to move up into southern England before drifting north through the evening and overnight. This could bring some quite torrential downpours at times.

That mess of heavy, thundery rain could take some time to clear through the northern half of Scotland tomorrow. Elsewhere, you guessed it - there'll be sunshine and sharp potentially thundery showers becoming quite widespread through the day. And, with lighter winds, they will also be fairly slow-moving, so where you catch one it's liable to hang around a while, increasing the threat of some flash-flooding.

Friday will be another similarly showery day - which means some tricky conditions for practice at the F1 British Grand Prix. The same can be said for Saturday as well, and not too much changes to start with on Sunday either. But, as the Azores high nudges closer during the day, the showers may ease back and die out across southern and central regions.