Much of the coming week is Atlantic driven, making it more unsettled, breezy at times and cooler than of late. There'll be some rain heavy in places, with stronger winds around mid-week, giving gale force gusts over exposed parts of North and West.

Most models suggest a rise in pressure from the South West on Thursday, settling the weather down. It'll also become warmer again but with a chilly North or North Easterly breeze developing in the East through next weekend. 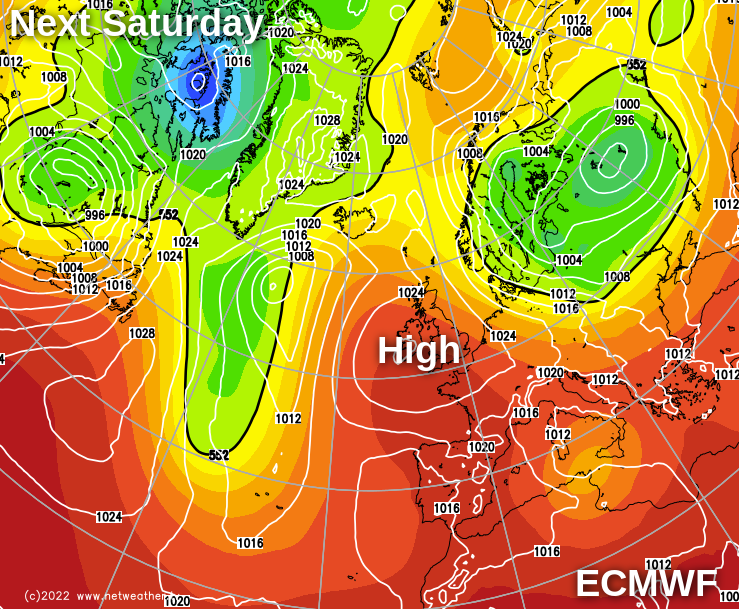 The South-East and some eastern areas seem likely to be wet on Monday with locally heavy, maybe thundery rain but the extent westward of this is open to question. Elsewhere expect a cooler, showery day. Some showers will be sharp, giving local thunder, with sunny intervals mainly at a premium. Noticeably cooler in the East and South and feeling chilly in the wind, with top temperatures only 11 to 14C in the North and 15 to 18C further South.

Monday night sees rain eventually moving away from the far southeast and East, leaving most places with broken skies and scattered showers. However, some dry weather with clear intervals, particularly in central parts and across the East later. Feeling chilly in a West or North West wind, but temperatures shouldn't fall below 7 to 11C.

Tuesday continues the cooler, showery theme, with often large amounts of cloud but some sunny intervals. The showers could still be heavy locally, with some places 'fairing' better than others. The showers should then fade from the West, ahead of more cloud and rain that will move into Northern Ireland and some other western parts after dark. Top temperatures 10 to 14C in the North and 16 to 18C elsewhere.

Wednesday looks particularly unsettled, as a spell of rain heavy in places crosses all parts from the West. This'll be followed by blustery showers on the windest day of the week, with gales possible for a time, mainly across Northern Ireland and in the West. Rather cool with the highest temperatures in the range of 12 to 17C. Further showers after dark mostly in the West.

Still unsettled, but the first signs of the change on Thursday with a North/ South split. Central and southern parts see fewer showers on a brighter day with sunny intervals. At the same time, the North and particularly Scotland and Northern Ireland, will be mostly cloudy and breezier with occasional rain or showers. A little milder, though, generally.

End of the week and next weekend

Friday sees a rise in pressure, bringing drier, quieter conditions, although probably still with variable amounts of cloud. Some sunshine, the best of which will probably be in the South and South West. Also becoming warmer, with highest temperatures 12 to 16C in the North and 18 to 21C further South.

Next weekend sees high pressure in charge, so it should be mostly dry and warm for a time with sunny spells. However, as an anticyclone transfers to the North of the country, the best of the sunshine will transfer to the West as a North or North Easterly breeze develops. This'll bring somewhat cooler conditions to eastern areas, with perhaps a few light showers developing towards North Sea coasts later.