The leaves are out, and the blossom is vibrant, as this mix of late spring sunshine and showers continues. What's more, we've had the almost perfect combination of much of the rain coming during the evening or after dark, leaving the days largely fine. So the farmers and gardeners are happier now getting the rain they need, with good sunny spells and warmth by day for most to enjoy.

But we're going to see a subtle change over the next few days, as winds turn into the West or South West, introducing somewhat cooler, fresher air off the Atlantic. Today though, winds remain in a southerly quarter, keeping temperatures above the norm, in another warm afternoon towards the South East.

This morning we still have some rain in the South East and over Suffolk from the remnants of last night's showers and storms. This, together with mostly medium and high-level cloud in many eastern areas, will clear, leaving most with another fine day. There'll be some warm sunshine, and it'll be mainly dry, apart from the odd shower across the North West of Scotland and Northern Ireland.

Top temperatures only 14 to 17C in the far North and West, but 18 to 21C more generally, with 22 or 23C likely towards the South East. Winds'll be light or moderate South or South Westerly. 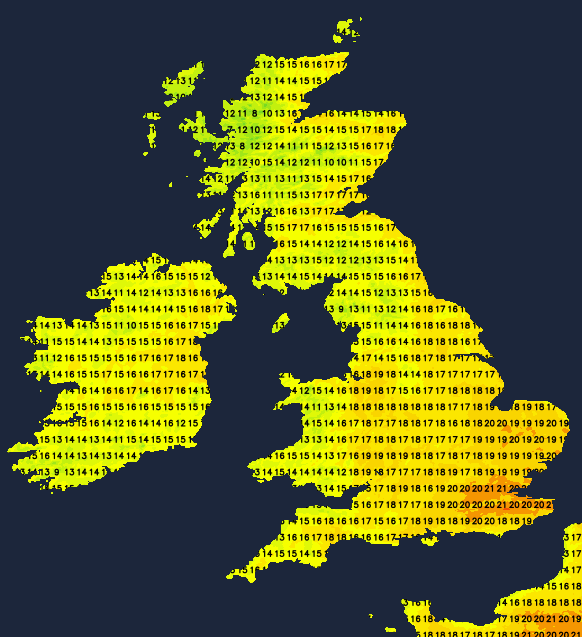 Northern Ireland and other western areas turn showery after dark as Atlantic systems begin to move in on a freshening southerly wind. Southern England and later parts of East Anglia could also see a few locally sharp showers, but elsewhere, it'll be a dry evening and night with well-broken skies in a mostly light southerly breeze. This could allow a few mist or fog patches to form around dawn, but any will be short-lived. Expect a mild night, though, with the lowest temperatures mainly in the range of 10 to 13C.

Across a large central swathe of the country, tomorrow should begin dry with some sunshine, although cloud will tend to increase from the West, bringing a shower risk later. Northern Ireland sees rain clearing to scattered showers, while Scotland and much of the West see showery rain moving in from the West, some of which could be heavy. Across Norfolk, Suffolk and the South East, although bright at times, from first thing you'll be subject to showers or even longer spells of rain, that could locally be heavy and thundery, although not everywhere will see these in a mixed day generally.

Although 17 to 19C will be down on recent values, temperatures could still reach 21C around London, while the North and West get no higher than 13 to 16C in a light or moderate southerly breeze.

There'll be a few showers working their way from West to East across the country on Friday evening, but these'll clear into the North Sea after dark. Then apart from a few showers in the North and West, the remainder of the night should be dry with clear intervals. It'll feel fresher in a South Westerly breeze, although temperatures generally are not expected to fall below 8 to 11C.

The weekend brings some warm sunny spells, particularly to the East and South on Saturday. But the trend will be for showers initially in the North and West to spread to most parts. It'll also be turning cooler, particularly into the early part of next week.