Another week, another powerful Atlantic low pressure system is on the way. It's already been named by the Met Office as Storm Barra and will be arriving on Tuesday.

Once Barra does arrive, it's high winds in exposed parts, especially near to coasts, along with the threat of a spell of heavy snow across Northern Britain which will be the main hazards. It'll then hang around over or near to the British Isles beyond midweek, stuck as it's blocked from making it further progress eastward by high pressure over Scandinavia. It will fill (weaken) during Wednesday, though, so the winds will become lighter, and with milder air being pulled in over the country, a lot of the snow will turn to rain.

As you may imagine, there are already weather warnings issued, covering many parts of the UK. They come into effect tomorrow morning, lasting throughout the day.

The southwest of Ireland will be the first to see the action, as winds really begin to pick up after midnight. At the same time, a band of rain with snow further north and particularly over the hills moves in from the southwest. With gusts of 70mph or more in exposed and coastal locations, the rain and winds move up into southwest England and Wales first thing Tuesday.

Through the rest of the day, as the low moves into Ireland, the rain continues to move northeast across the UK, readily turning to snow across the high ground of North Wales, Northern England and Scotland - with some to lower levels here as well. 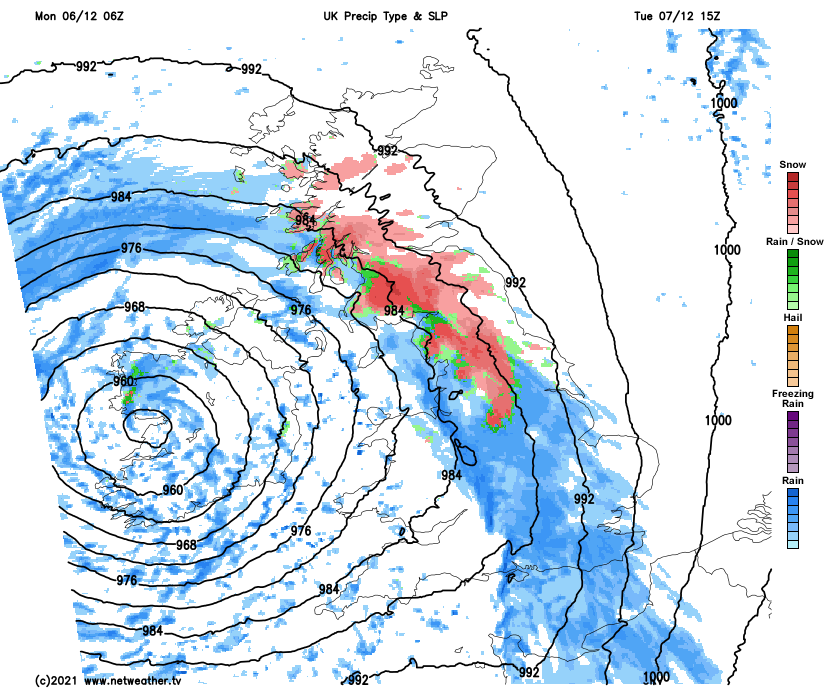 As Storm Barra closes in on Ireland during the morning, the south and southwest of Ireland could see some really severe winds, with gusts of 90-100mph not out of the question near coasts. With Barra then crossing into Ireland, winds are likely to intensify up through the Irish Channel, affecting western coastal counties of southwest England and Wales in particular. Although the gusts aren't likely to be as strong as over Ireland earlier, they could still breach 70-80mph in exposed spots.

A wild evening and overnight period follows on, with gales, perhaps severe in exposed places continuing. The rain, sleet and snow will continue to track northeast, with a fair rash of blustery showers following on behind. These falling as sleet or snow over the high ground of Northern Britain.

By Wednesday, the low pressure system will be over the top of the UK and will be beginning to fill. The winds will still be strong near to coasts and around the flanks of the low, but should slowly moderate as the day wears on. It'll be a very unsettled day, with showers or longer spells of rain countrywide, with the snow becoming limited to the higher peaks of Northern England and Scotland.