A very unsettled spell of weather is coming up, with frontal systems and low pressure systems moving in from the west at frequent intervals.

There is a very cold air mass currently over Scandinavia, accompanied by a blocking high over northern Scandinavia, but it looks like a strong Icelandic low will prevent this cold air from making it across the North Sea to the British Isles. However, it won't be particularly mild, with the low pressure systems moving south-eastwards as they head into Europe. Temperatures will mostly be near to slightly below average for the time of year, with some snow on high ground and sometimes to lower levels as well, particularly in inland parts of Scotland.

Today will be slightly colder than average for the time of year, with highs of 4 to 6C in most parts of the country, reaching 7 or 8C in parts of southern England. Central and eastern Scotland will be cloudy with some outbreaks of rain, plus snow on high ground, which will spread into north-east England during the evening. Elsewhere it will be a brighter day, with some showers, though parts of south-eastern and central southern England may stay dry. The showers will generally be heaviest and most frequent in the west, and they will fall as sleet and snow on higher ground, but mainly rain at low levels.

Overnight, some further rain, with sleet and snow mainly on higher ground, will head southwards through England and Wales, though again staying primarily dry in the south, and the rain will be heaviest in north-east England. It will be clearer for much of Scotland and Northern Ireland with some showers near north-facing coasts, and western parts of Scotland and north-west England will see widespread frost. Most of England and Wales will be milder, with lows of between 2 and 4C.

Tomorrow will be a mostly bright and fairly cold day, with highs of 4 to 6C in most places, but again 7 or 8C in the far south and south-west, and also around 7C near the east coast of England, where an onshore north to north-east wind will pick up off the comparatively warm North Sea. There will be further showers, mainly of rain or hail at low levels, for the eastern side of England. Eastern Scotland will be cloudier with outbreaks of rain, with sleet and snow on higher ground. Western Scotland and Northern Ireland, plus Wales and the western side of England, will be mostly clear and sunny.

A band of rain will head in from the west early on Monday, with snow on high ground, and there is a chance of snow penetrating to lower levels for a time in Scotland and the north of England, though as is often the case in these situations, there is a lot of uncertainty. Brighter weather with showers, mainly for western areas, will follow behind, and these will be wintry to low levels in most parts of Scotland and Northern Ireland, and sleet and snow will fall on high ground further south.

A deep depression is expected to move in on Tuesday and Wednesday, bringing wet and windy weather, and again there is potential for snow to penetrate to low levels in the north, chiefly in Scotland, from this system. Brighter weather will again follow behind the main belt of rain, sleet and snow, with some showers. 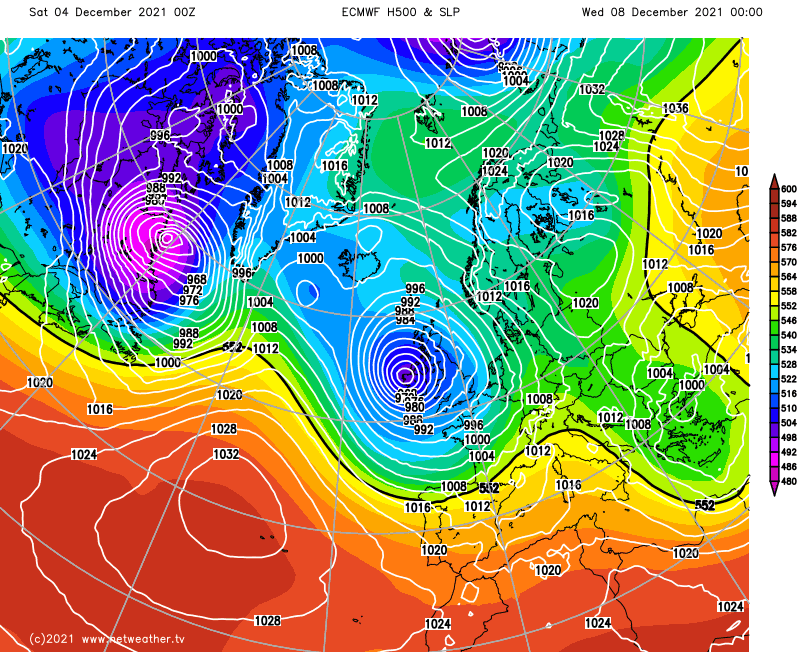