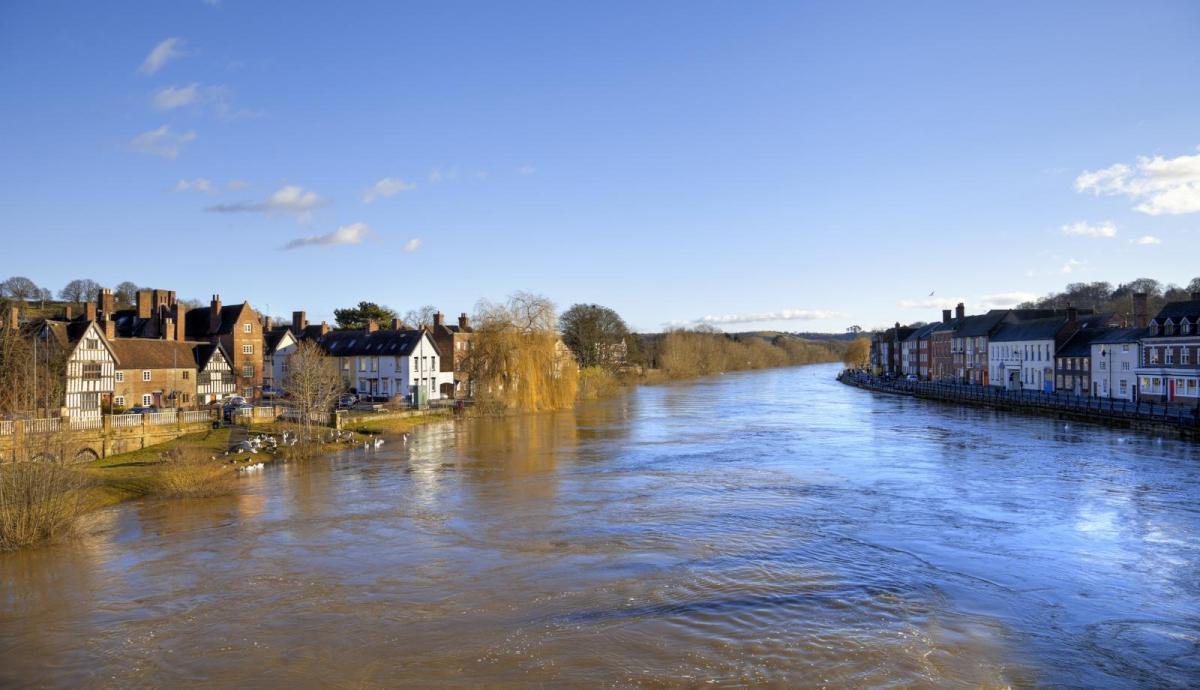 The very mild weather that has dominated much of this month continues for the rest of this week, as a deep area of low pressure to the northwest over the Atlantic and high pressure over Europe combine to pull in tropical maritime air all the way from the Azores and beyond. Temperatures today and tomorrow could reach 18-19C across eastern England where we see dry and sunny conditions – which is well above average for late October. Though there are signs that it will turn colder in early November, though some uncertainty how cold it will get. 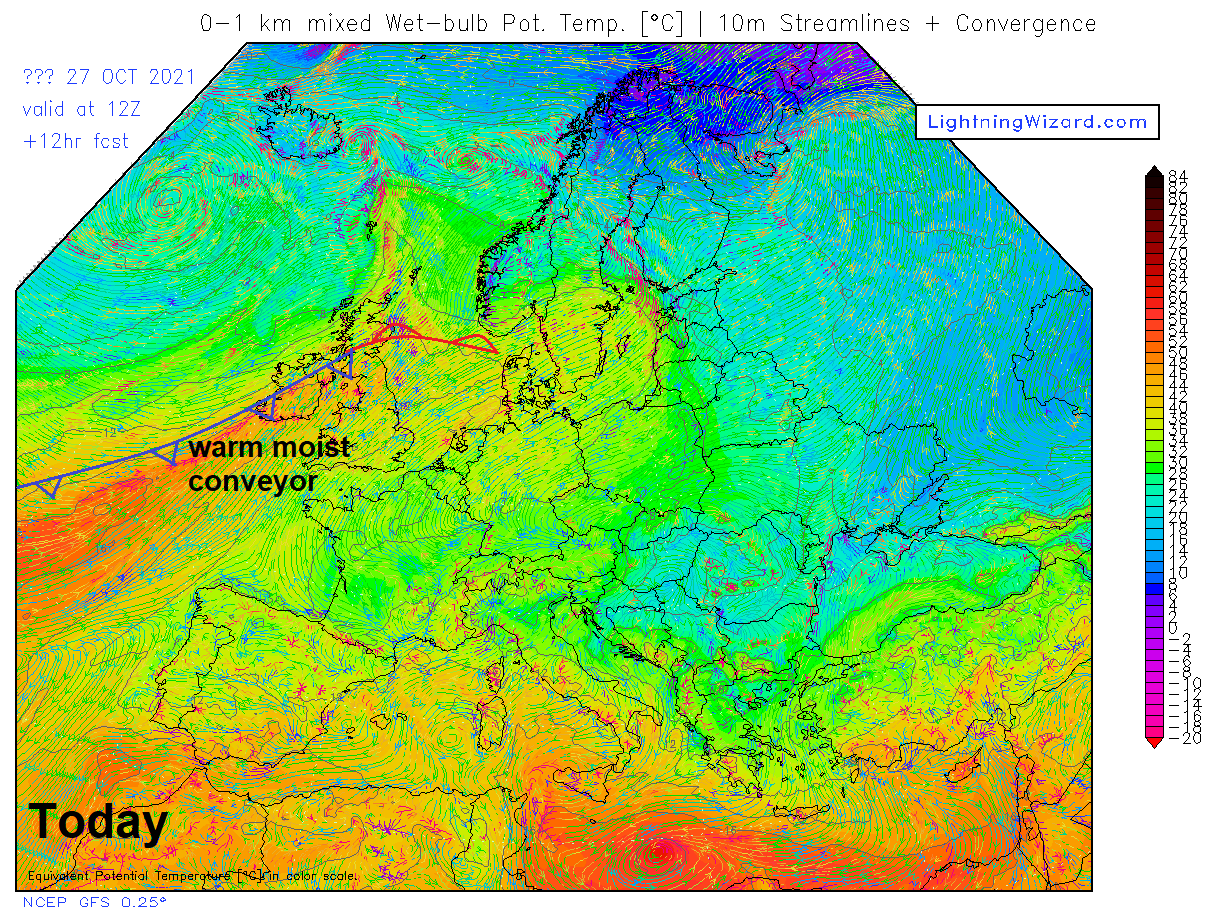 A strong southwesterly jet stream and wind at the surface will also carry a conveyor of moisture-laden tropical maritime air across Britain over the next few days. And with a slow-moving weather front trailing across northern Britain parallel to the jet stream, the conveyor of warm moist air will be lifted upwards, with help of high ground, to create heavily laden rain clouds that will dump lots of rain over the southern Uplands of Scotland, Cumbria and west Wales today and Thursday. These areas could see over 100mm or 4 inches of rain – which could lead to some flooding.

The front will finally get a move on Thursday evening bringing rain to eastern areas that stay dry today and much of tomorrow. Then all of the UK will be in the same boat with showers or longer spells of rain on Friday and through the weekend, accompanied by a strong southwesterly wind, but it will be mild for Halloween for those out trick-or-treating, though take a coat and brolly for those wicked downpours. 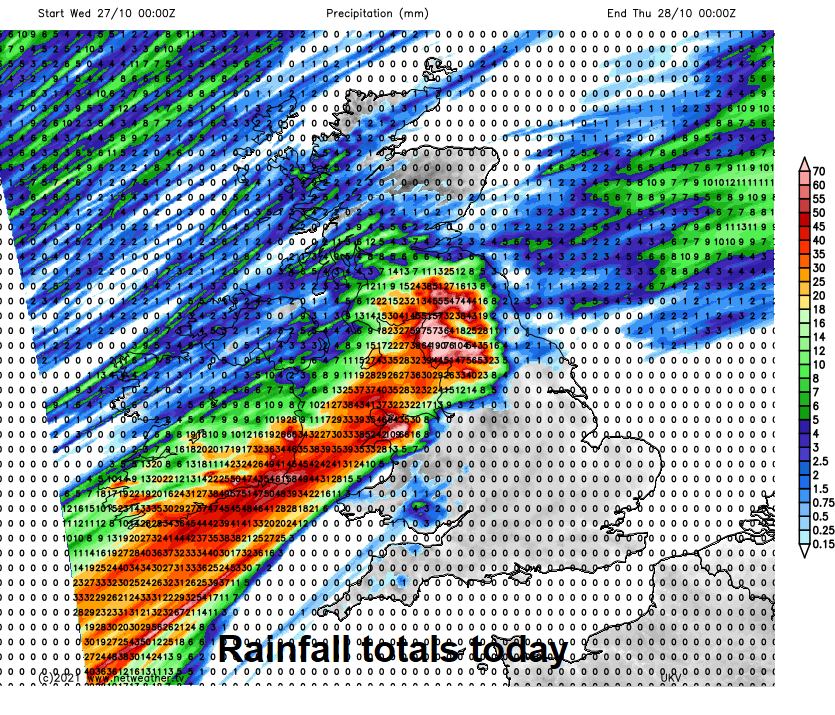 Either side of this slow-moving rain band along a wriggling cold front it will be drier but mostly cloudy, some showers possible across northern N. Ireland and western Scotland – while elsewhere there could be come patchy drizzle. Best chance of some sunshine across eastern Scotland, central and eastern areas of England sheltered from the brisk southwesterly wind across all parts. Very mild though today, temperatures reaching 13-16C north of the rain band across Scotland and N. Ireland, across much of England and Wales reaching 16-18C widely, perhaps 19C where the sun appears.

The rain will continue to pile in across southern Scotland, northern England and north Wales overnight, mostly dry to the north and south, mild and windy across all parts though.

The stubborn rain band will only slowly move through Thursday, continuing to affect southern Scotland and northern England, but edging a little further east to affect Wales and SW England too. Ahead of the rain mostly dry but often cloudy across the rest of England, some limited sunshine in the east. Scotland and N. Ireland seeing some scattered showers and sunny spells. Another rather mild day, 12-15C for Scotland and N. Ireland, 16-17C for England and Wales. 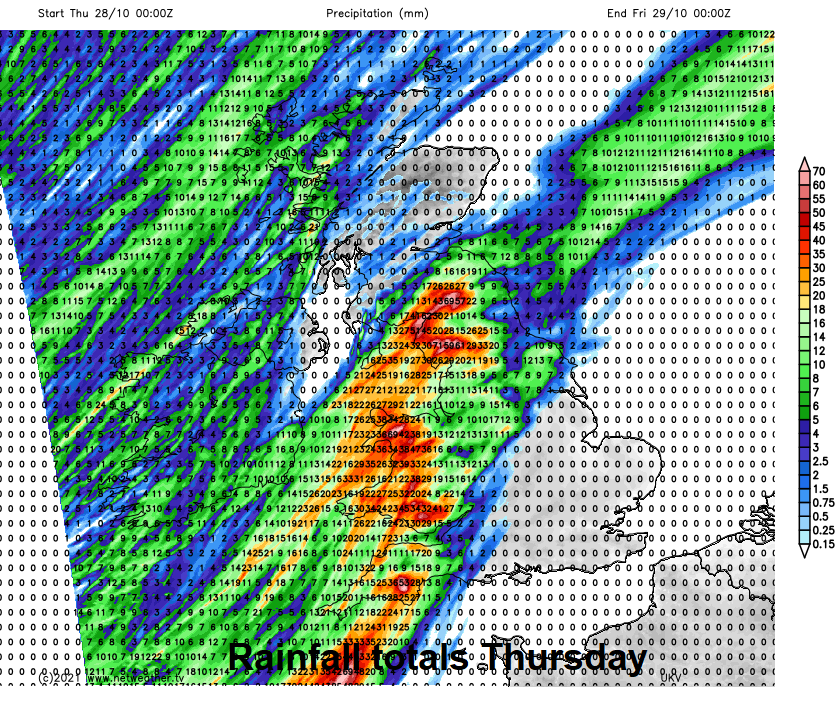 The weather front finally gets a move on Thursday night, taking its rain further east across England. Then on Friday an area of low pressure developing over Ireland looks to track northeast bringing an area of heavy rain to N. Ireland, western and northern Scotland. Elsewhere, rain clearing eastern areas in the morning, then sunshine and scattered showers. Temperatures reaching 12-14C in the north, 14-16C in the south.

The weekend continuing unsettled and often windy, mild but not as mild as it has been this week. Showers or longer spells of rain will affect most areas with low pressure close by, but there will be some drier interludes with some sunny spells.

Remaining generally unsettled and windy next week, with further spells of rain or showers at times, though signs that the wind will turn to come from a more northwesterly then northerly direction as we go through the week, so turning colder.