Mildness and Meandering Fronts for now

There are signs of a colder snap around the turn of the month but for the moment, it's very mild with winds from the South or South West. So for the meantime although unsettled and sometimes wet, with meandering fronts bringing rain, at times, mostly to the North and West, it could even become rather warm in the East and South.

It's a wet, misty start over Scotland with the rain heavy in places and also some hill and coastal fog over Highland and the Northern Isles, as a warm front moves in off the Atlantic. Overnight rain across Northern Ireland has cleared, but the province will remain rather cloudy with the rain returning later, after perhaps a few brighter intervals towards Armagh and Down. There'll be a stiff South West wind that'll give gales in the North and West, where gusts in excess of 50mph are likely across Highland Scotland and the Northern Isles.

Further South after a bright start in some eastern areas it'll be a cloudy morning for northern England parts of the Midlands and Wales, where patchy rain is likely for a time but it shouldn't amount too much. Elsewhere it'll stay dry and bright with some sunshine especially towards East and South where it'll become very mild even rather warm. Top temperatures 12 to 14C over Scotland and Northern Ireland, but 15 to 17C elsewhere and locally 18C where you see the best of the sunshine despite a South Westerly breeze that'll freshen. 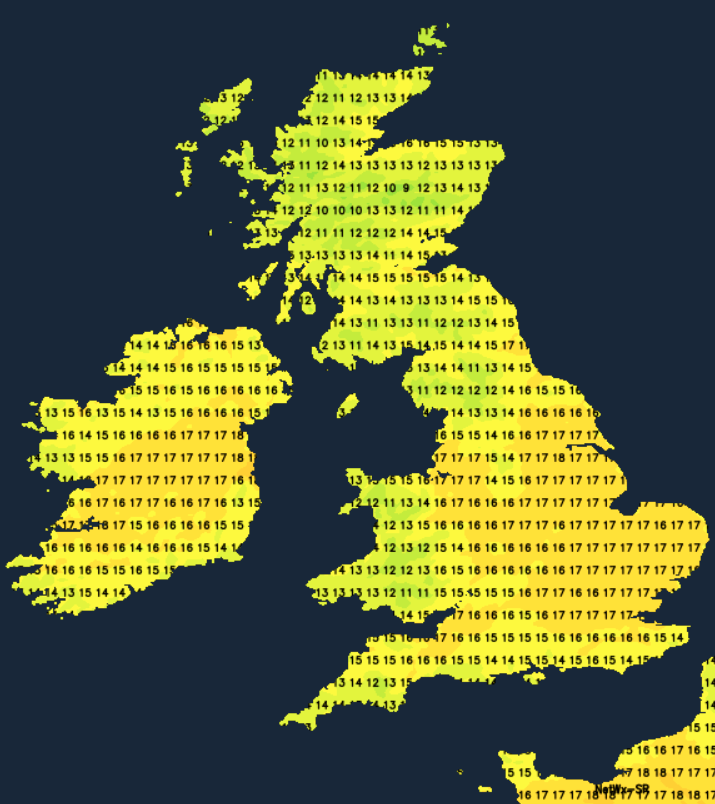 Northern Ireland sees further rain after dark, while Scotland particularly the North sees a clearer interval but still with a few showers in the North and West. Southern Scotland turns wet again later in the night, with Cumbria, Northumberland and some other parts West of the Pennines also seeing mostly patchy rain or drizzle at times in often quite misty conditions. Elsewhere it'll be mostly dry after dark, with skies continuing to break in the East and South. A South West wind continues to give gales in the North and West in a mild or very mild night, when temperatures across the country shouldn't fall below 10 to 14C.

As meandering frontal systems try to amble their way slowly East and South on Wednesday, Scotland, Northern Ireland and Cumbria remain unsettled with further occasional rain or showers heavy in places. The far North of England and later perhaps the North West, parts of Wales and the South West may also see patchy rain later but elsewhere it'll continue mostly dry. The brightest weather will again be in the East and South, allowing further sunny intervals to come through in places.

A South West wind remains quite fresh and continues to give gales in the North West but it remains very mild. Top temperatures 12 to 14C in the North and West, but 15 to 17C elsewhere, with a rather warm 18 locally 19C possible in the brighter spots across parts of the East and South where you have shelter.

After dark much of Scotland and perhaps Northern Ireland see more broken skies, but showers continue in the North and West. some heavy with thunder. East Anglia and the South East also continue to see broken skies but elsewhere expect cloud and some rain that could be heavy at times. But it continues mild in a fresh or strong South West wind, with temperatures falling no lower than 9 to 14C again.