Over the weekend and into next week, there'll be a trend for things to become more unsettled and breezier, but it's not all bad news for the impending half-term school holidays. With winds coming up from Spain and the Azores, it'll become unusually mild for a while. Temperatures could reach a warm 19 or even locally 20C on Tuesday across parts of the South and East in brighter spells, before autumn really arrives as it turns wet and windy by or after mid-week.

It was a cold start across parts of Scotland and the North East, with temperatures falling as low as -4C first thing in some rural parts of Northumberland. But after some sunshine in places, to begin with, it'll tend to cloud over from the South, bringing some rain to West Scotland later, although most parts stay dry. Further South, it's milder but misty in places, with cloud thick enough to give light rain or drizzle in some areas. The cloud will tend to thin and break, giving some sunshine later, especially towards the South West. It'll be mainly dry here too, before some heavier bursts of rain move into Northern Ireland through the afternoon.

Winds light at first become southerly and freshen a little in the West, where some strong gusts are possible later over exposed coasts and hills.  Top temperatures only 9 to 13C in the North and 14 to 16C further South, with a pleasantly warm 17C possible where you see the best of the sunshine.

The East and far North, in particular, see broken skies at times into the evening, but for most, there'll be a lot of cloud in a misty night. There'll be patchy fog, especially over coasts and hills exposed to a southerly wind that'll be fresh in the West. It'll be mainly dry in the East and far North at first but don't be surprised to catch a shower overnight, with Northern Ireland and more western parts seeing some longer spells of rain, some of it heavy. Although still chilly in the far North, it'll be a mild or very mild night for most, with temperatures generally not falling below 8 to 12C.

Sunday will be unsettled with showers about, especially over Northern Ireland and Scotland, where longer spells of rain heavy in places will occur. Elsewhere there'll be a lot of cloud at times with the best of the breaks over the East, South East and parts of the Midlands where it could end up quite pleasant. In the best of the sunshine could reach a very mild, even rather warm 18 or perhaps 19C, giving a summery feel even though it's mid-October. More generally though, 14 to 16C is more likely, with the far North remaining chilly and wet, only 7 to 9C here. 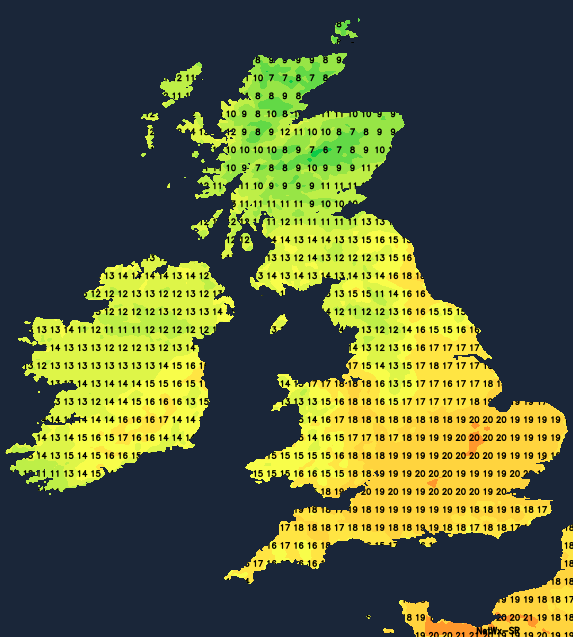 After dark, it's a similar story with further showers around, but skies will break at times, mainly in the East. It'll turn misty in a mostly light southerly breeze with patchy fog forming in a mild night when temperatures shouldn't fall below 7 to 12C, before Atlantic systems move in for the start of the working week bringing some rain to most parts from the West.