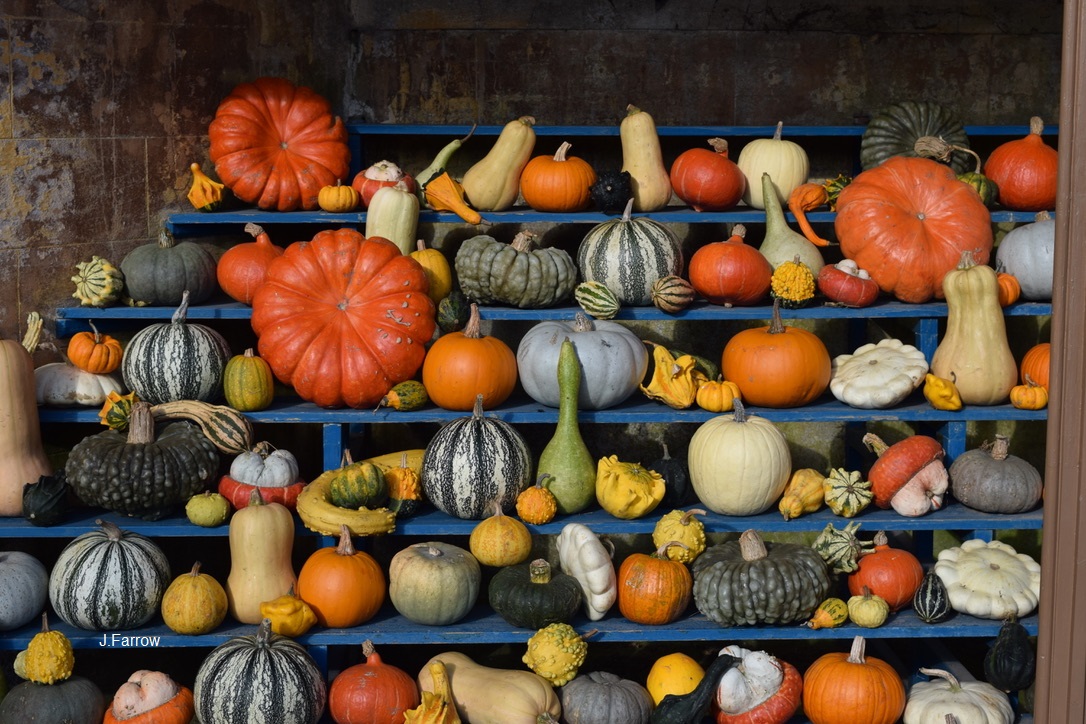 A chilly start to the weekend but a warmer finish

Colder air to start the weekend but warmer to finish. It is nippy this morning in northern parts, Glasgow down to 1C and by early Saturday there will be a ground frost for parts of northern UK even an air frost for inland Scotland. 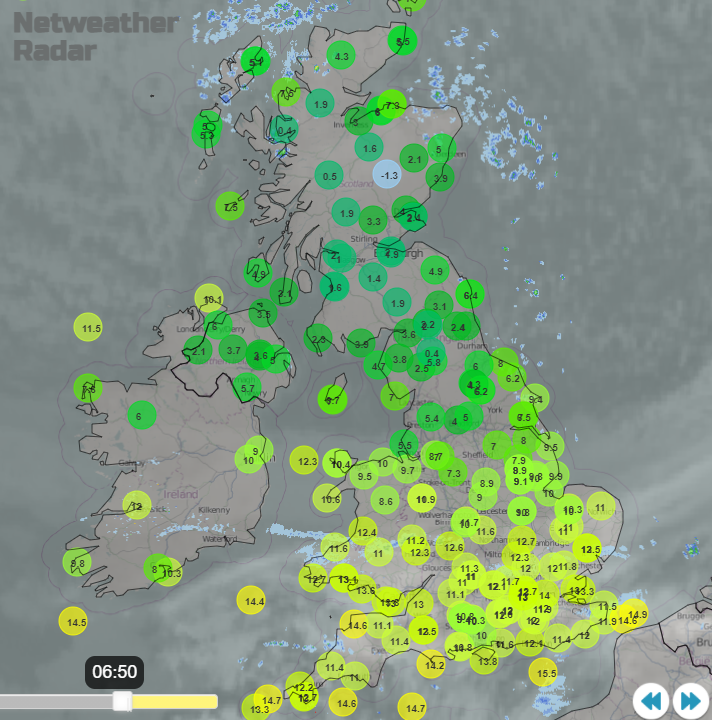 There is still milder air in the far south and southwest of Britain this morning and this will remain for Devon and Cornwall. Not shifted by the plunging cold front which has briefly introduced a flow from the Arctic. There is a low pressure over Scandinavia which brought the windy weather to Scotland yesterday and high pressure is now building in from Greenland and linking down to the Azores. 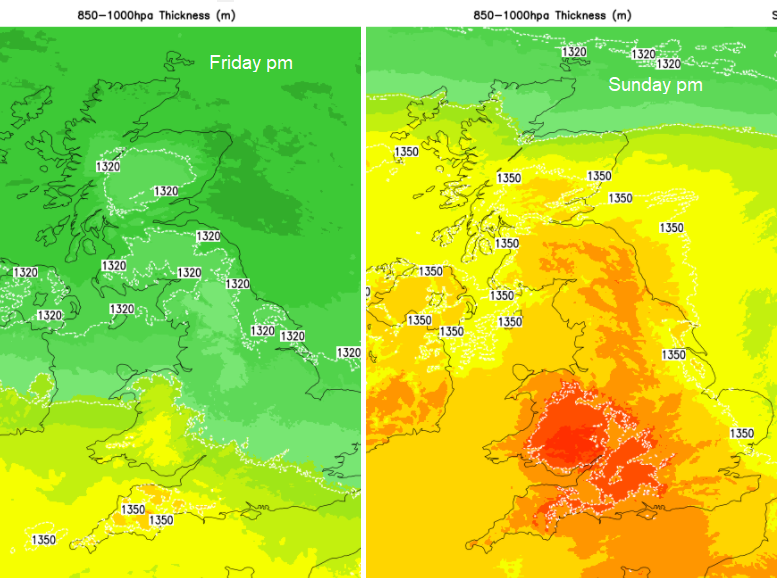 So, a settled Friday and Saturday before weak weather fronts begin to nudge in from the west for Sunday. Milder air follows, lifting the temperatures up into the high teens but next week looks much more unsettled. A mess of weather fronts, rain, cloud and blustery winds as numerous low pressure rush in off the Atlantic.

The frontal bands including the cold front are over southern England this morning with more cloud and patches of light rain. This pivots allowing the fresher air into southeast England but the SW stays with temperatures of 16 to 18C and a few showery bits which extend to the Isle of Wight and over the Channel too. Further north it is brighter, sunny and dry but feels cooler. Hardly any breeze today thanks to the high pressure

The cloudy area over SW Britain and southern Ireland will begin to push northeast tonight but thins and allows some clear spells. Inland northern Scotland will dip below zero, but NE England also looks likely to see a frost by dawn in rural areas. Northern Ireland will depend on the cloud but cold before midnight in the north. 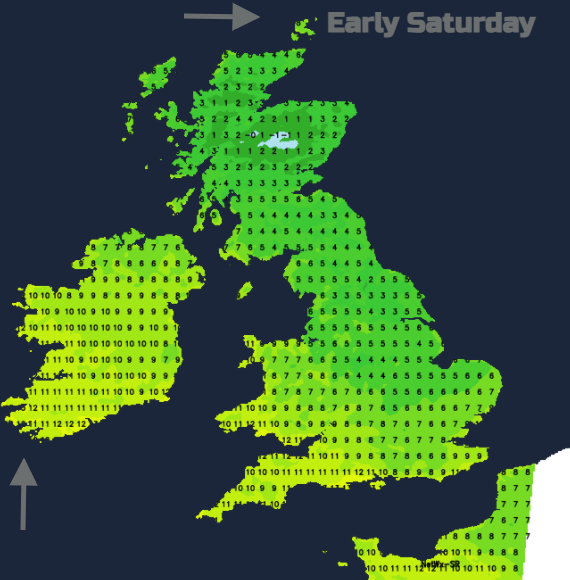 Whilst Saturday will be settled and quiet, there will be more cloud about with patchy light rain for western coasts. It’s quite a mixed picture with more chance of sunny spells in the east and far north but greyer further west. Still light winds with temperatures of 10 to 17C.

By Saturday evening a frontal system will be pushing in from the west bringing rain to western Scotland and Northern Ireland. This all-edges eastwards with some heavy bursts for Northern Ireland and the Central Belt of Scotland- much needed rain here. 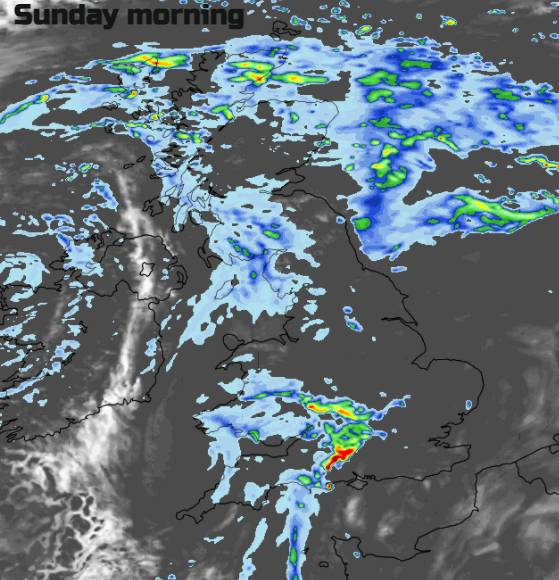 So, a messy start on Sunday with grey skies and outbreaks of light rain for some. Yet it will feel warm. The southerly flow will lift temperatures widely in the mid to high teens.

Next week looks more active with blustery winds and spells of heavy rain from the Altnat5ic. So, we have this cold interlude from the north for the start of the weekend but then turning milder with the southerly flow. This lasts into the start of the new week but there are signs that it could turn chilly again later this week. It will be half term for more families and teachers by then, so we’ll see what autumn 2021 wants to throw our way for the October break. 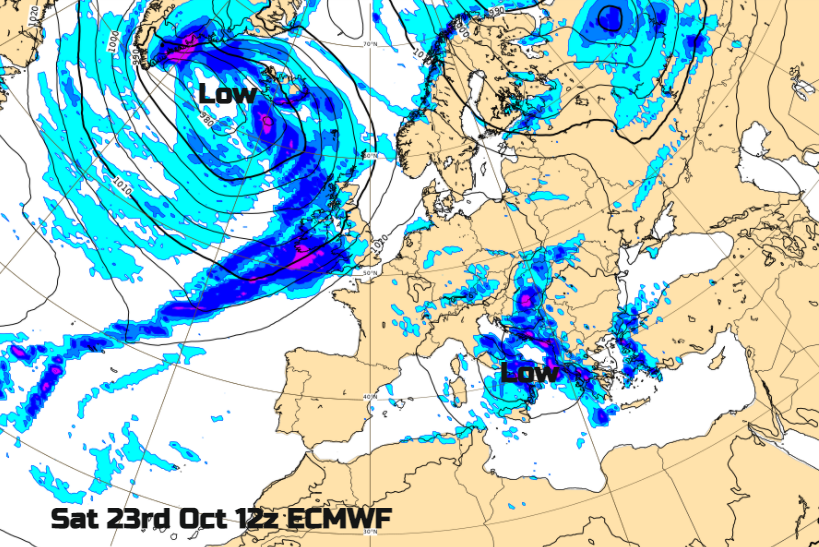 If you are heading further afield, southern Europe is looking drier than average when NW Europe looks wetter for the rest of October. However, there has been a low pressure bringing very unsettled weather through the Adriatic into Greece and the Balkans. Another one is showing for next weekend which often brings heavy showers, gusty winds to the central Mediterranean. A large low pressure is forecast from the northwest for the UK, so it won’t be any better here.