Calm weather continues for most next few days, but changes afoot by early next week

High pressure will continue to bring spell of settled weather across the UK over the next few days, though there will be a lot of cloud moving around the high centred to the south, particularly across northern areas. The best of the sunshine towards the south and southwest.  High pressure will slip away by Friday, allowing a cold front with a spell of rain to slip down across the north on Thursday. By the time the front reaches the south on Friday morning, there won’t be much rain along it, but it will bring cooler air for all, but with a new area of high pressure building in from the northwest, it will be a dry day for most. 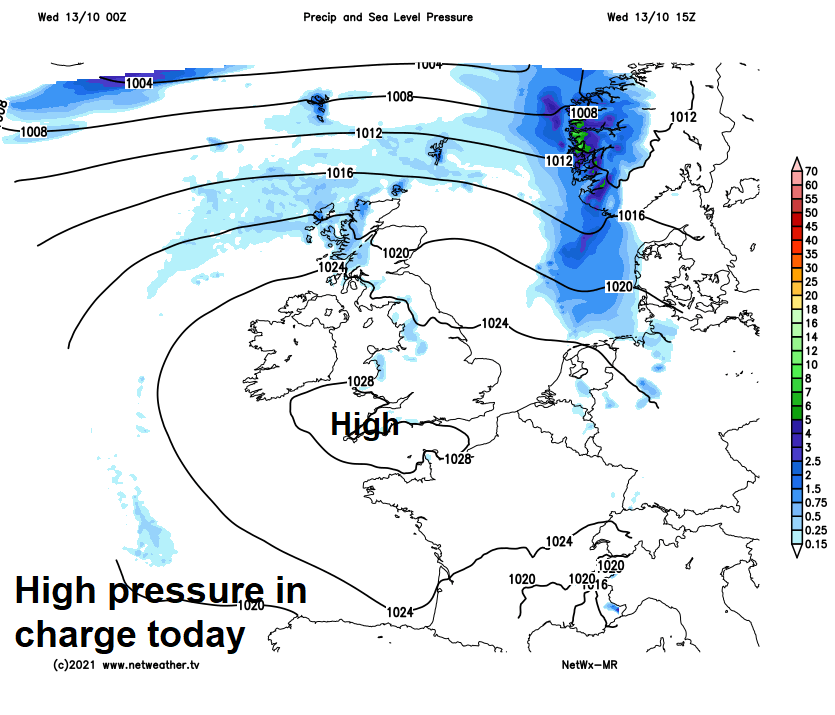 It’s a chilly start out there this morning across eastern and southeastern England thanks to light winds and clear skies overnight – with a ground frost in places at dawn. Temperatures falling into low single figures, a few spots close to freezing across East Anglia overnight. It’s milder further north and west, with more of a breeze off the Atlantic. Temperatures as high as 14C in the Wirral and Moray Firth at dawn.

Most will stay dry today, but a lot of cloud around, the best chance of some sunny spells today across south Wales, southern, central and eastern areas of England, though here there will be some early mist and fog patches to watch out for. A weak front will bring more in the way of cloud across Scotland, N. Ireland, NW England and north Wales – bringing some patchy drizzle or the odd spot of rain in places – particularly in the northwest. Though to the east of high ground, say eastern Scotland, there could be some sunny spells developing. Temperatures reaching 14-15C under the cloud, but where the sun pops out, reaching 16-17C. 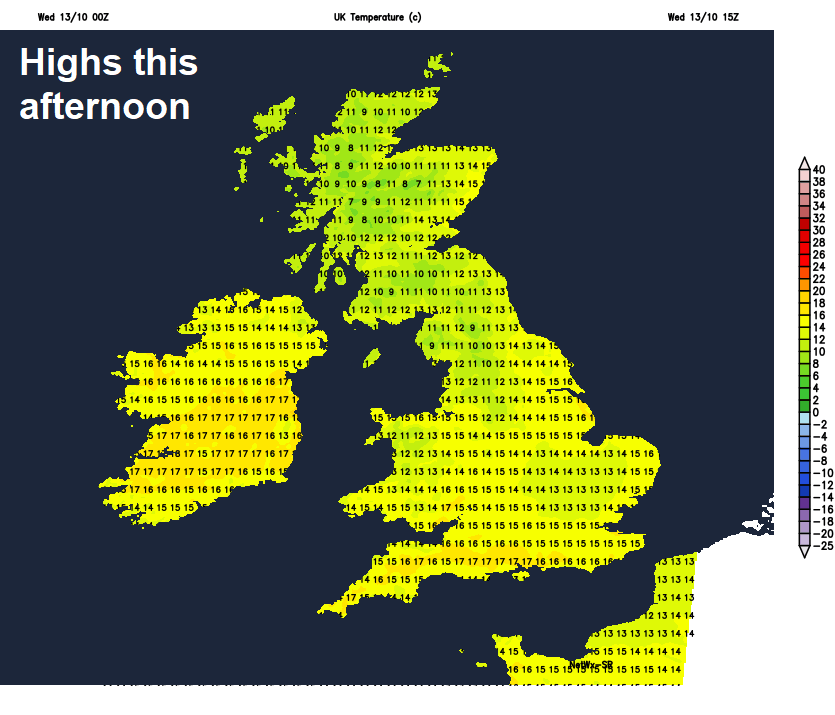 A lot cloud around tonight, so frost unlikely, temperatures generally holding up around 9-11C, mildest towards western coasts with the onshore flow. Showers developing and becoming windy across western Scotland, elsewhere generally dry.

Changes across the north on Thursday, as a cold front moves south across the north, bringing cloud and outbreaks of rain down across Scotland, N. Ireland through the day, windy too. Cloudy ahead of the front with patchy drizzle or light rain around western coasts and hills. Partly cloudy but some breaks allowing some sunny spells at times towards southern and eastern England. Cooler but brighter conditions with scattered showers moving into northern Scotland. Temperatures 15-17C ahead of the cold front across much of the UK, behind the cold front, across the far north, reaching 12-13C at best. 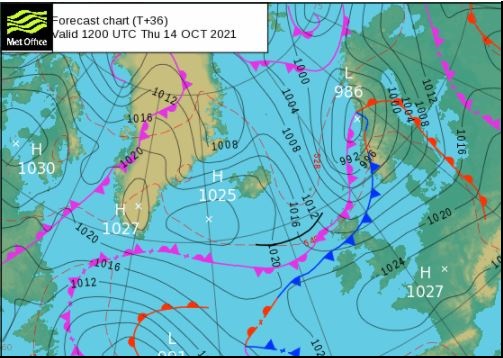 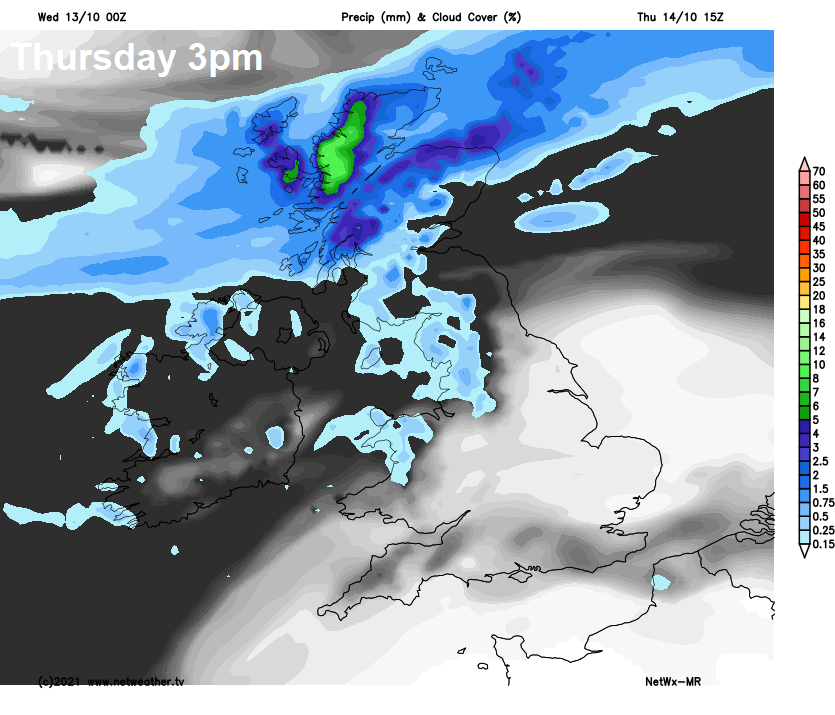 The cold front reaching the south Friday morning, only patchy light rain or drizzle along it by then, before it fizzles out and clears the south coast by late morning. Following will be cooler conditions, but sunnier skies and dry for most during the day after a chilly start, perhaps with a frost, in the north.

High pressure will hang on to bring another dry day for many on Saturday, but a change across northwest – as cloud, rain and windier conditions spread in off the Atlantic. These more unsettled conditions spreading further east on Sunday, though the southeast looks to remain dry and bright all weekend. After a cool end to the week with maximum temperatures in the low teens Celsius, it will turn milder again over the weekend, as winds turn to warmer southwesterly direction, with temperatures reaching the high teens in any sunshine. 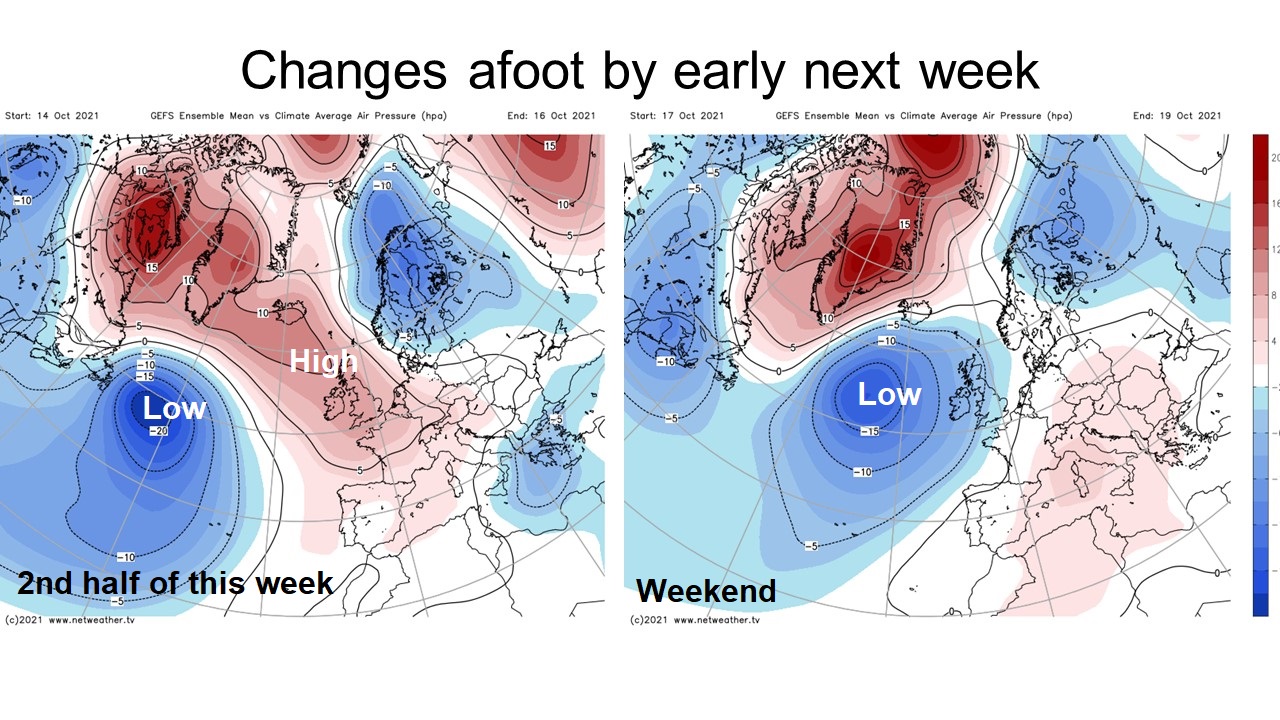 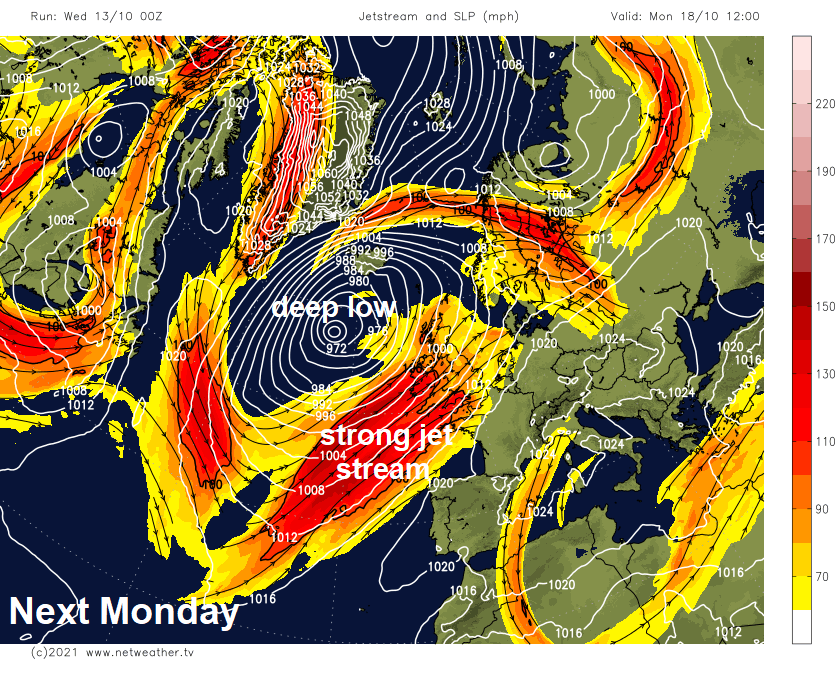 Turning unsettled across all areas next week, as a strong jet stream over the Atlantic aims at the UK with low pressure in charge, bringing windy conditions with spells of rain or showers sweeping across all parts. Deep low pressure to the northwest to the start week moving in across the far north to end the week, so we could see gales across central and northern areas later in the week too. It looks like it will be quite mild though, especially earlier in the week, with winds from the southwest. 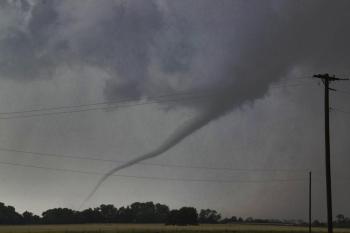