Rest of the week sees hefty downpours across the UK. Heat is causing issues elsewhere in the world

There will be lots of showers for the rest of this week. As low pressure eases itself over the UK from the Atlantic there will be more of a breeze, warm and humid air, plenty of downpours but bright spells in-between. There is still the risk of thunderstorms and so localised flooding. It is also not ideal for farmers. The wet weather is a consideration for the harvest but also the possible torrential downpours could cause damage to some crops. Keep an eye on the radar which shows the movement and intensity of shower cells and make sure the lightning display is on (crosses/dots depending on the version) 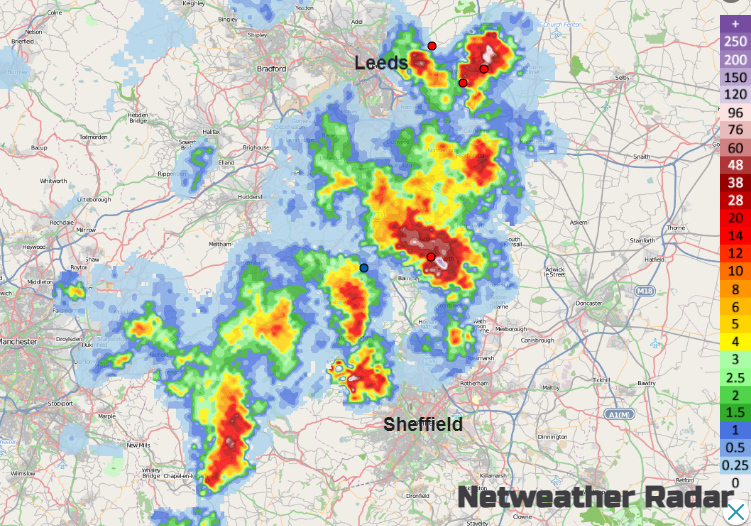 Yesterday’s downpours caused difficult driving conditions on the A1 in England and for Country Antrim as thunderstorms lumbered by. The localised nature of the showers and storms makes it tricky to identify where will be affected but there are wide yellow warnings from the Met Office.

Areas that have been highlighted: Thunderstorm risk on Thursday for Northern Ireland. These follow the morning rain and will be slow-moving, so give higher totals to certain areas. Then from Friday into Saturday morning, a larger area could be affected.
North Wales and NW England look to keep a feed of heavy showers through Saturday. By Sunday, southern Britain should see some easing in the heaviest showers and fewer about. Northern Britain and Northern Ireland continue with the unsettled weather. 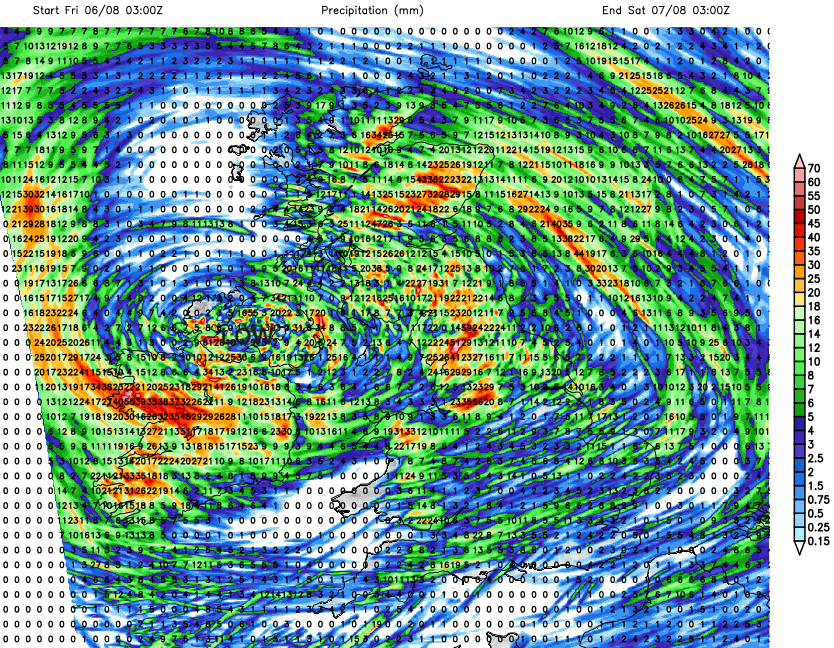 The Environment Agencies are highlighting their concerns, not only for surface water flooding in the downpours and thunderstorms and so cities and transport networks but also for river flooding.

Today we see a change from frontal rain to more convective weather. The rain over Ireland and western Britain this morning really gets going by lunchtime for Northern Ireland and Wales. These frontal bands extend eastwards across Britain as the low centre moves over Northern Ireland and the heavy showers with thunderstorms get going. 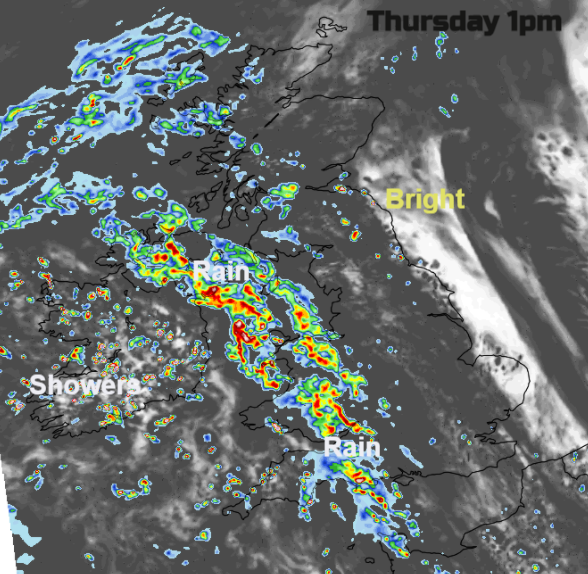 By Friday, the frontal rain will be over northern Scotland and more of the UK covered in the heavy showers with more chance of a thundery downpour. Temperatures remain in the high teens and low 20sC, but it will feel close as this is moist air. 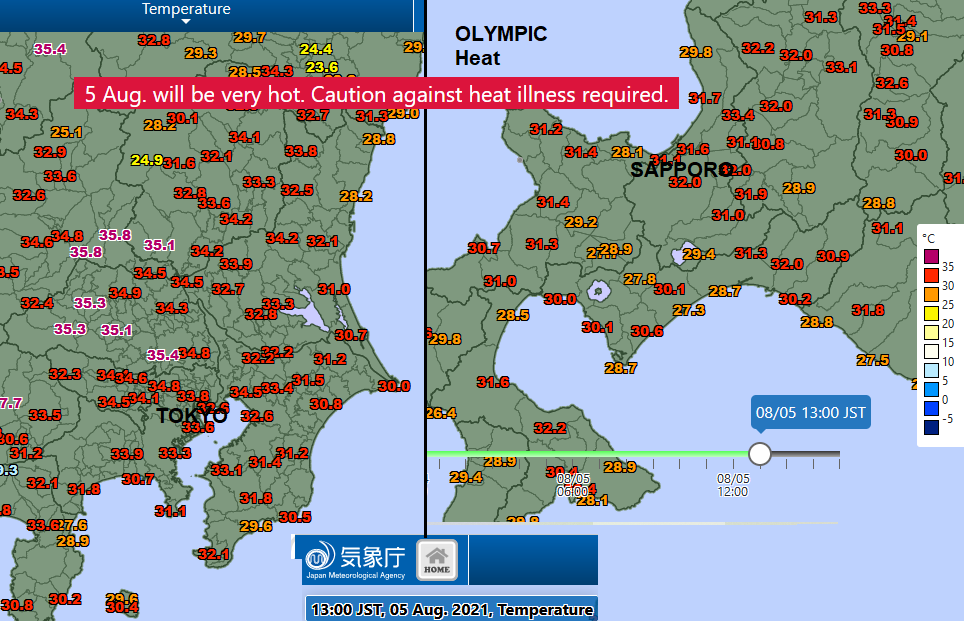 The Olympics continues under heat warnings in Tokyo and Hokkaido where the Marathon will take place this weekend. Tokyo is forecast to reach 35C today and Sapporo 34C on Friday. Much of Honshu should see showers at the weekend but that just makes it more humid with air temperatures still up to 30C. The local Heat Stress index warns against ‘heavy exercise’. 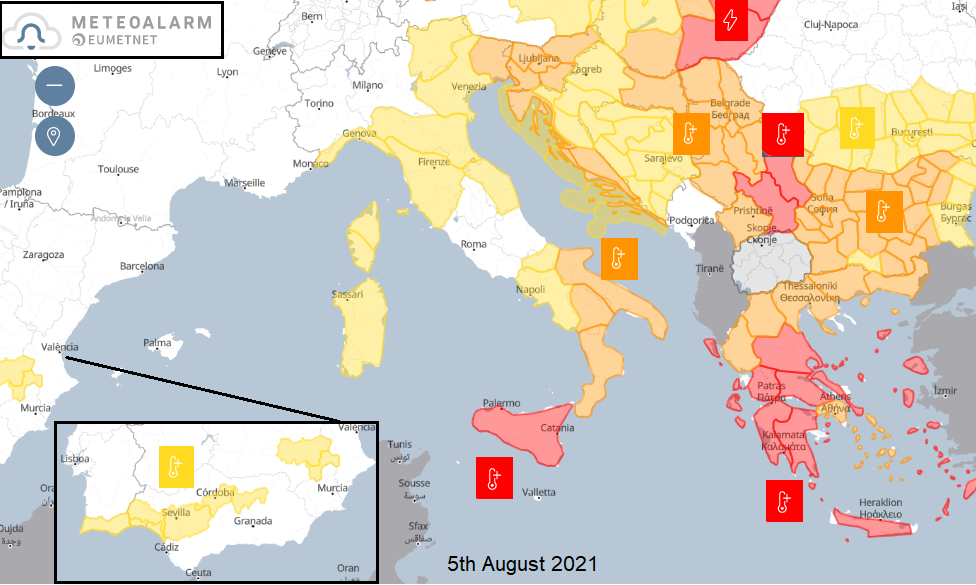 In Greece. the birthplace of the Olympics is surrounded by flames and smoke. Firefighters are battling numerous fires around Olympia. Across southern Europe, there are summer heat warnings but extreme conditions in the SE still. Greece and Turkey have extreme wildfire situations with ongoing evacuations, people having to flee by boat as the smoke is too dense for planes. Serbia, Sicily and the Greek Islands including Rhodes have red warnings for ongoing high temperatures.