August off to an mixed start

Since the turn of the century and with the odd exception (2003 comes to mind), August has consistently been the most disappointing of three summer months. So a hot, dry August is long overdue, but the latest model runs hardly look inspiring.

So it's a coolish unsettled start to the new month, with Sunday bringing showers, especially for England and Wales. Northern Ireland and the West of Scotland should see the best of the sunshine today, where it'll be mainly dry, but don't expect a heatwave as a North or North Westerly breeze will feel a little chilly when the sun goes in.

We already have mostly light showers quite widely over England, with generally large amounts of cloud. But there'll be sunny intervals, with the showers becoming heaviest and most frequent over southern England and in some eastern areas, giving local hail and thunder. While the sun is still powerful enough to make it feel quite warm when it makes an appearance, top temperatures of 17 to 20C and only 13 or 14C in the far North will be disappointing for early August.

Further showers are likely into the evening, especially across central and southern parts. But they'll become lighter and fewer after dark, and as skies break, western areas, in particular, will see clear intervals developing in a mostly light North Westerly breeze. A few short-lived mist patches could also form towards morning in rural areas where it may turn a little chilly where skies remain clear, but it won't be an unduly cold night with the lowest temperatures mostly in the range of 7 to 12C.

The new working week begins fine and sunny in some parts, but cloud amounts continue to vary, making Monday across the country often 'fair' rather than fine. Expect a scattering of showers to develop once more, most likely in the East and South, where a few could still be quite sharp, but they should be lighter generally and fewer with a better chance of it staying dry. 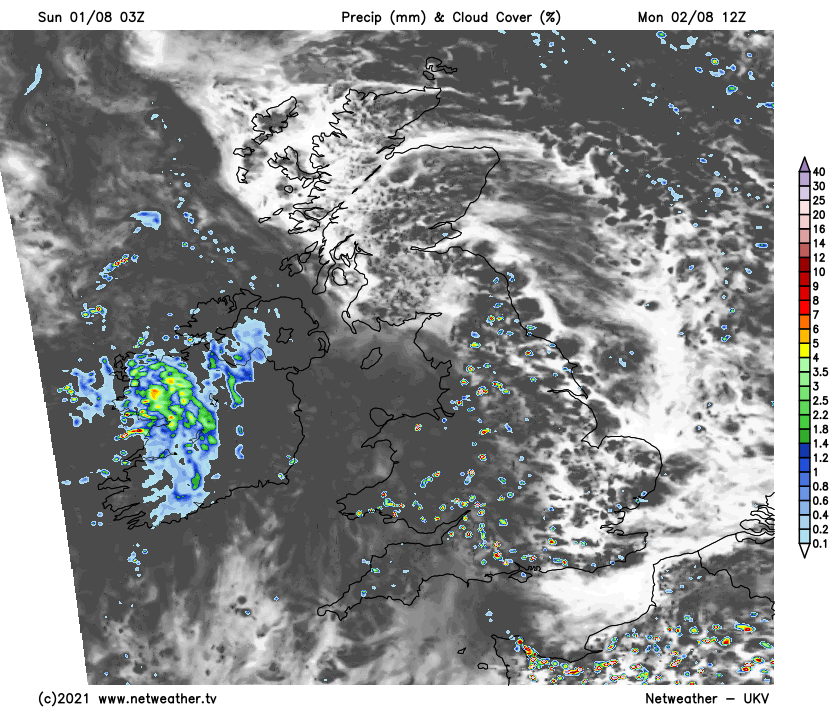 Later in the day, Northern Ireland, mostly Tyrone and Fermanagh, may see patchy rain moving in. Winds will be mostly light from the North West or West, with top temperatures perhaps up slightly on Sunday's values reaching 16 to 21C, perhaps locally 22C in a few spots towards the South coast. 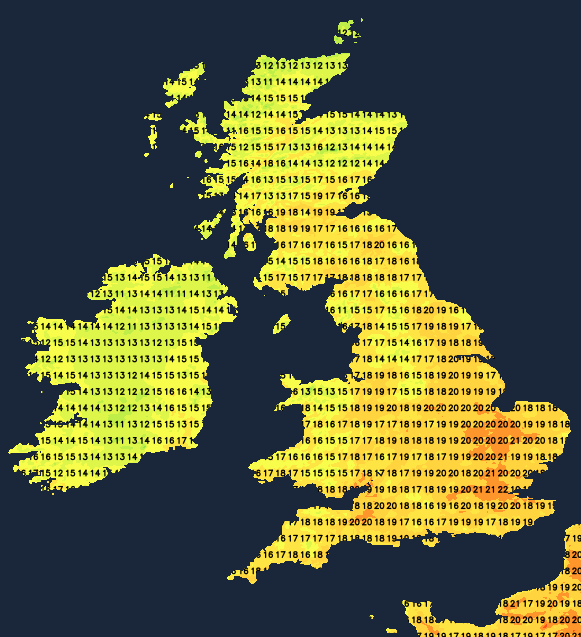 Little overall change is expected into the evening, with remaining showers tending to melt away, giving some sunshine to end the day in places. Most parts become dry after dark, and with light winds, a few short-lived mist or fog patches could form again around dawn in rural areas. But towards Donegal and later perhaps across the West and North of Scotland, a weak Atlantic front may bring patchy, mostly light rain or drizzle before morning. A few rural spots could turn a little chilly once more, but on the whole, temperatures generally shouldn't fall below 8 to 12C.

Much of the remainder of the week sees variable amounts of cloud and a few showers, before it turns breezier and more generally unsettled again later. A showery weekend may then be followed by warmer improving conditions during the second week of August, so 'fingers crossed' on this one.