Calmer conditions this weekend, but remaining on the cool side, with showers in places

Storm Evert brought some rather autumnal wet and windy weather to southern areas of the UK on Friday, with some damage and disruption in places. This weekend it’s looking a little calmer, with sunshine and showers in places, though it will remain on the cool side for the time of year. No signs of any real warmth as we head through next week either, with temperatures generally held back in the high teens in the north to low twenties degrees Celsius in the south - which is a little below average for the time of year. Although early next week will on the whole be dry and bright, but with a few showers in the south, mid-week looks to turn more unsettled and windier, as the jet stream cranks up over the Atlantic, bringing increasing showers or longer spells of rain.

Temperatures generally a little below average for the time of year over the coming week, particularly in the south: 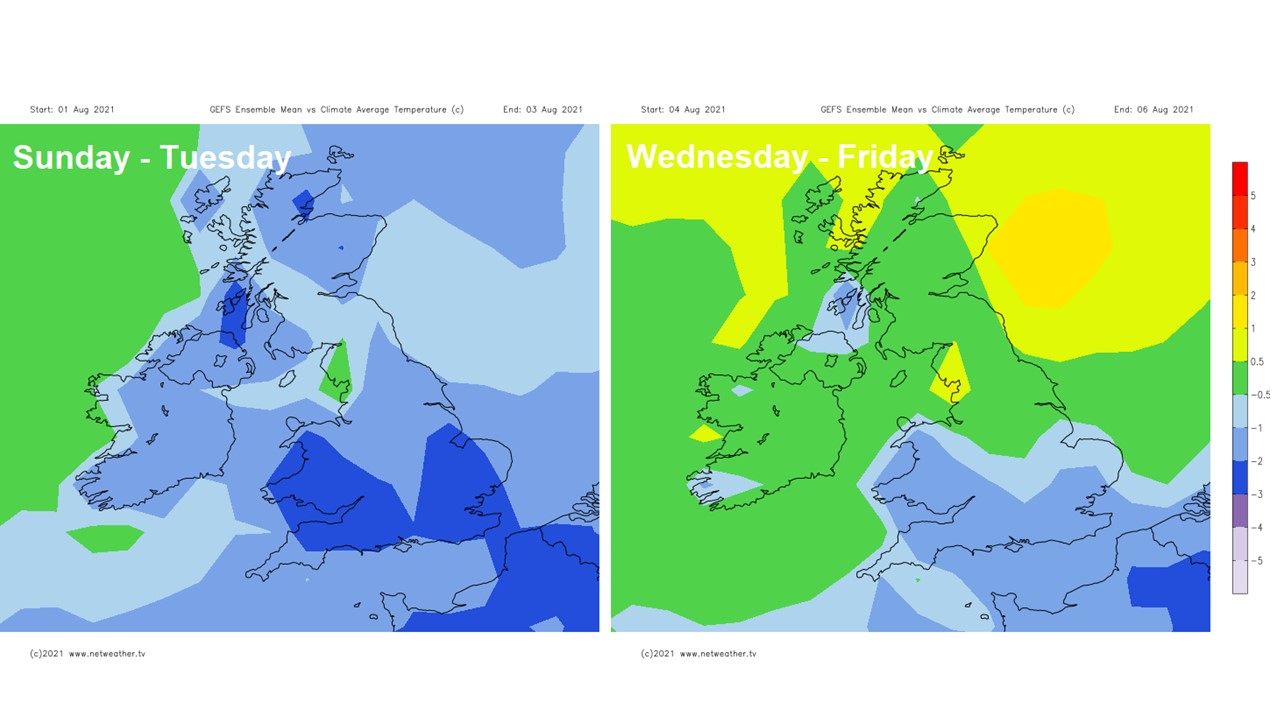 For now, Storm Evert has long cleared out into the North Sea and now over towards Denmark – leaving a cool and showery northwesterly flow in its wake across much of the UK. Showers will turn heavy and thundery across parts of southern and eastern England, the greatest risk of thunder across the SE England, as indicated in the Thunderstorm Watch issued. 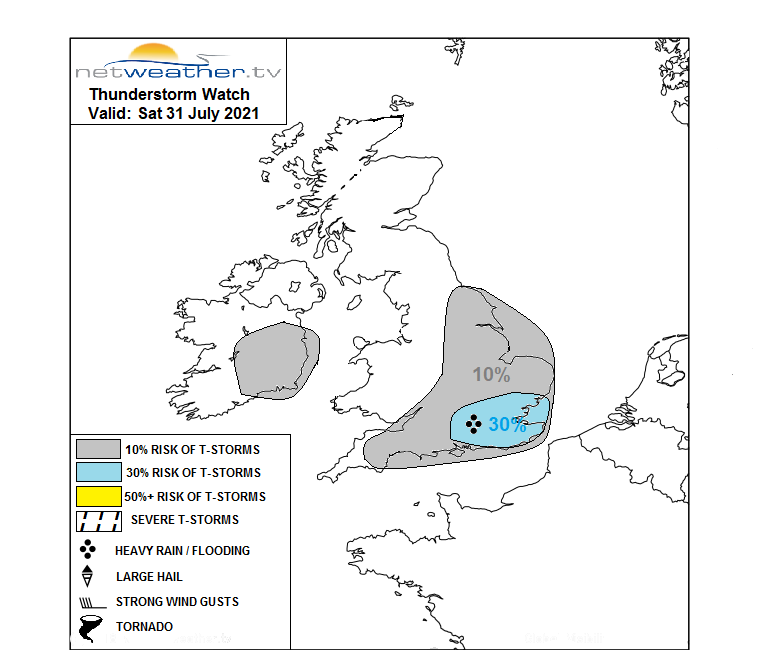 Showers will be fewer towards the northwest, with western Scotland and Northern Ireland likely staying mostly dry and sunny. There will be some sunny spells between the showers, though remaining rather cloudy across NE England and eastern Scotland. Not particularly warm for late July, particularly across the north of the country – where temperatures will reach 15-19C at best, across the south reaching 20-22C. 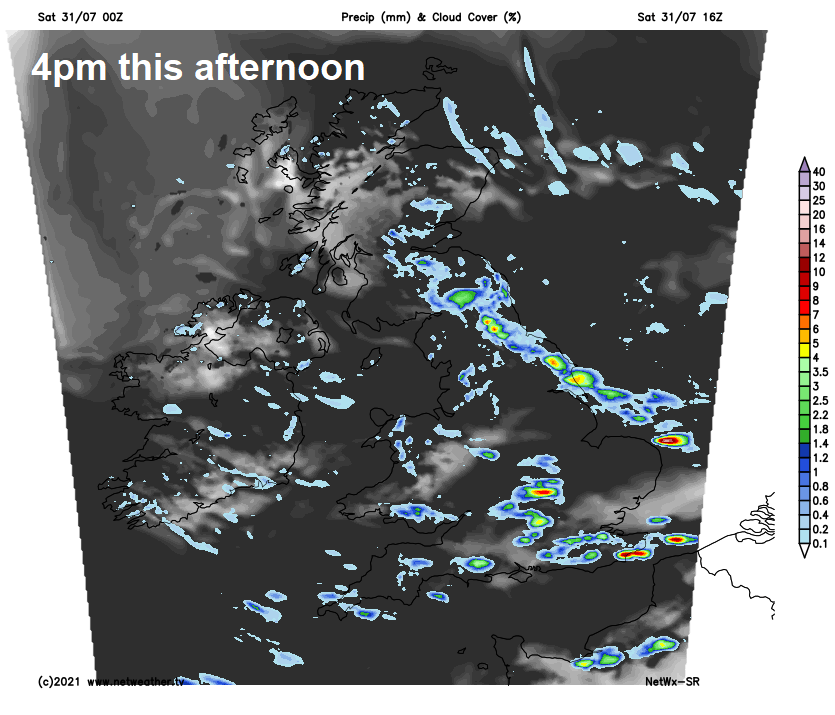 Sunday will be a similar day to Saturday, with another day of sunshine and scattered showers for England and Wales, perhaps turning heavy and thundery across southern England. Perhaps a few showers across northern and eastern Scotland too, but generally dry for NW England, N. Ireland and western Scotland. Cool for many, particularly Midlands northwards where temperatures will reach the high teens Celsius at best, 20-21C across southern England and south Wales.

A weak ridge of high pressure will build in from the west to start next week, but southern parts look likely to see further showers develop both Monday and Tuesday after dry and sunny starts. Though generally showers they will be light and well-scattered with thunder unlikely. Many escaping the showers. Generally, northern areas more likely to stay dry and bright or sunny, though a few showers possible for northern England and southern Scotland. Temperatures still disappointing for High Summer, reaching 17-19C at best in the north, 20-21C in the south. 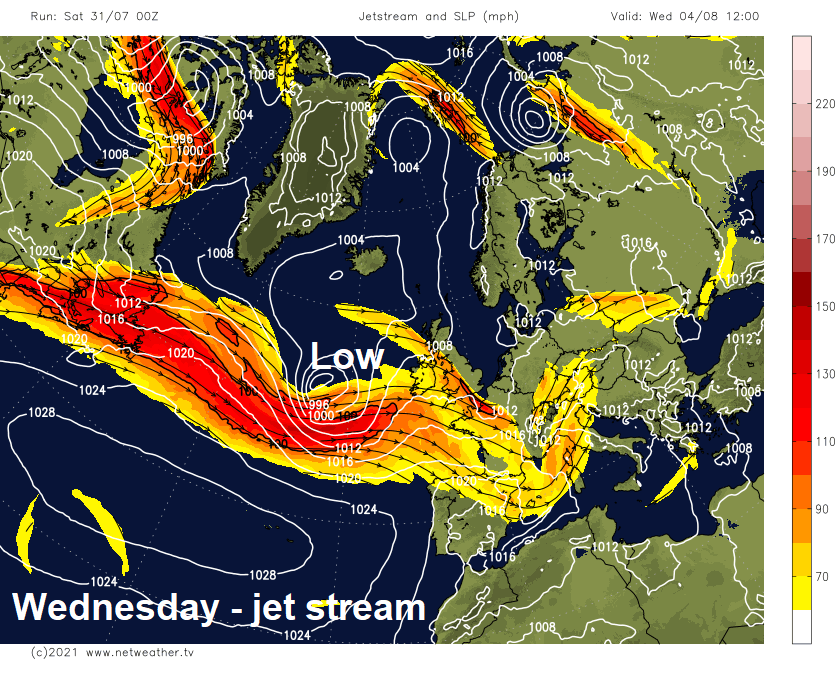 Some changes come mid-week, as a strong and active jet streak races across the Atlantic towards the UK by Wednesday. This looks to introduce low pressure systems off the Atlantic for the rest of the week – bringing more unsettled and windy weather, though some uncertainty over the track of these lows. The first of these lows looks to arrive across Ireland by late Tuesday, introducing showery rain and breezy conditions across England, Wales and N. Ireland on Wednesday. Another low may push in from the Atlantic on Thursday, probably towards the south, though uncertainty over track, but expect showers or longer spells of rain on Thursday and Friday, but some drier spells with some sunshine too. But generally, temperatures in the high teens at best in the north or low twenties at best in the south, so nothing to write home about temperature-wise through next week.