Storm Evert: High winds and heavy rain on the way

Storm Evert has been named by the UK Met Office for a windstorm that will hit SW England during the night of Thursday 29th July. A spell of wet and wild weather will affect the far SW with bands of heavy showers and strong winds spreading over more of Wales and England through Friday. It will be “unseasonably windy” 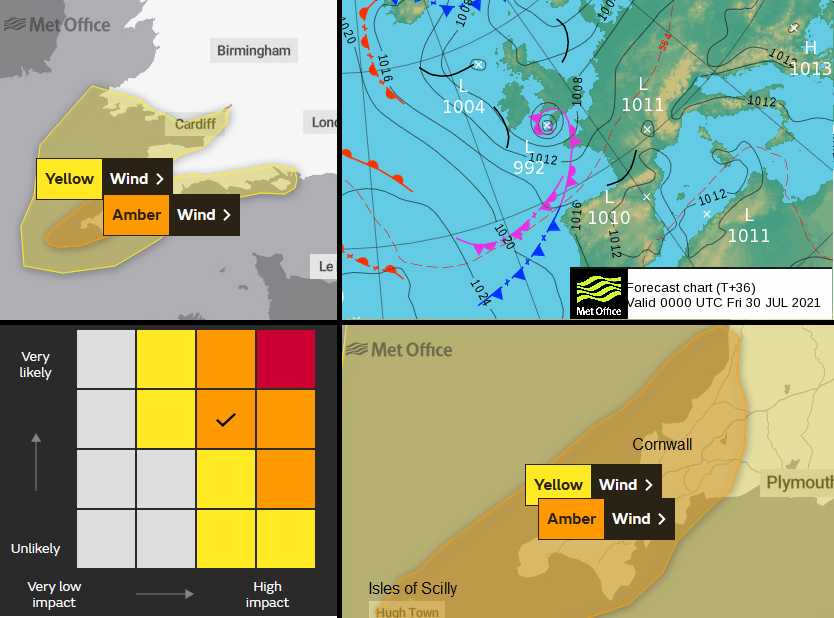 This low pressure is forecast to start throwing heavy showers over Cornwall and Devon during Thursday evening with the high winds peaking in the early hours of Friday 30th. Gales, even severe gales are forecast of the isles of Scilly later on Thursday evening with very strong winds affecting Cornwall in the middle of the night. Coastal areas could experience gusts over 60mph with up to 75mph for more exposed parts. There will also be heavy rain at times, onto ground that has already seen a soaking earlier this week.

There is some uncertainty about Evert’s movement eastwards tonight, the models have already nudged it northwards. And also, which areas of southern Britain will see the heaviest downpours from the showery rainbands. 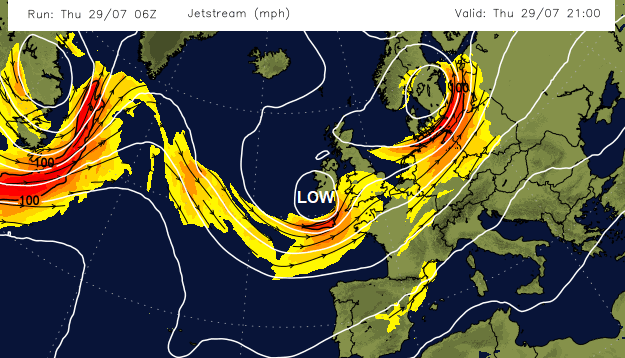 The uncertainty in the models comes as they await the development phase this evening of Evert. There is a small jet streak above the Western Approaches, and this will be key in the rapid deepening of Evert later today. 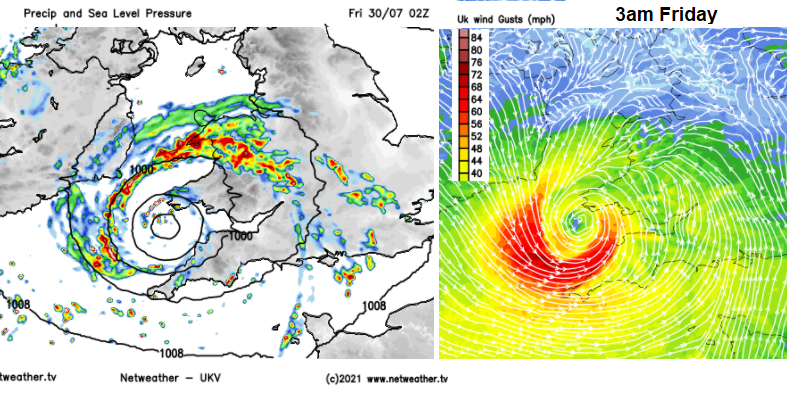 Southerly winds and heavy showers will affect Cornwall through Thursday evening. By midnight there will be much heavier downpours over SW England, reaching into southern Wales. Possibly even mid-Wales too. Scotland and Northern Ireland are unaffected by Evert and the far north of England too. The far south of Ireland will see heavy rain and Met Eireann have issued yellow rain warnings for southern counties 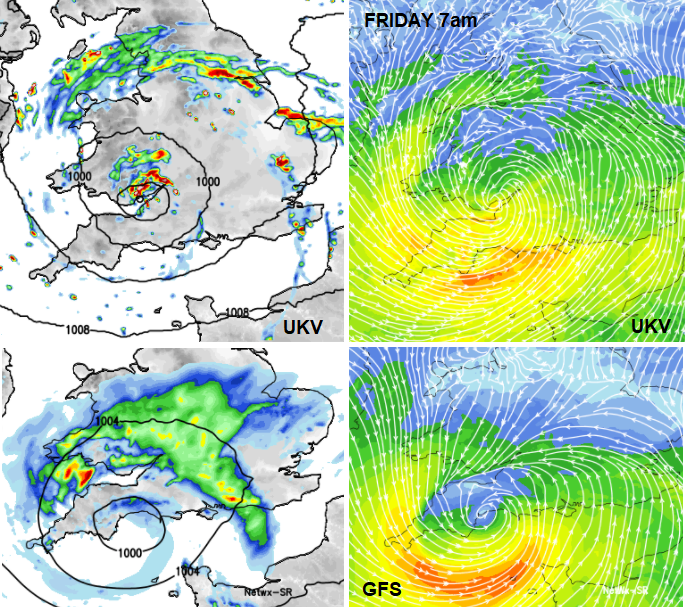 By Friday morning the differences are more obvious from the UKV to the GFS (with the more northern track being preferred). The bottom two images show the low further south which would bring the worst of the day winds to the Channel Islands and keep the rainbands away from northern England. The ECMWF model keeps the low centre over north Devon around 06z, just south of the UKV which is closer to Cardiff. If you are looking at weather symbols on your app, keep this variation in mind. Through the morning there looks to be a band of heavy rain spilling from north Wales over northern England, the north Midlands and The Wash. It is quite a messy picture into the afternoon with large areas of showery rain and cloud over the Midlands, eastern and NE England and Yorkshire. For Wales and southern England, there look to be large gaps in between the heavy, even thundery showers. 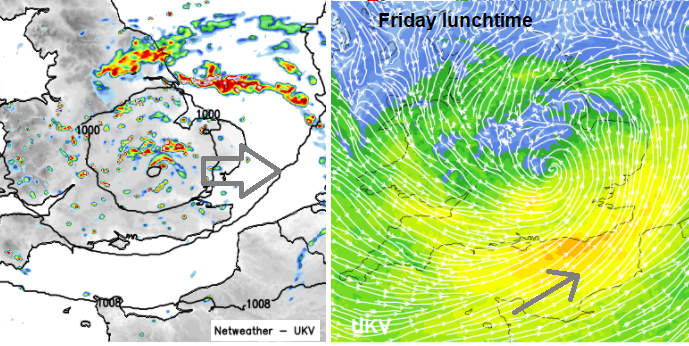 By lunchtime, the low pressure will have progressed across southern England, still with bands of sharp showers and the strongest winds hitting the coast of Sussex and Kent. South-westerly winds here.

Strong winds continue for SE England into Friday afternoon particularly for the eastern Channel and around the Thames estuary with scattered heavy showers for eastern England.

And that’s it one night and day, then Storm Evert will be away over the North Sea

Although the process for “Name our Storms” can seem, let’s say, flexible, an Amber warning is usually a key part. It is the summer holidays, people are travelling on Friday, perhaps staying in the SW from other parts of the UK. There will be people camping and caravanning, as there are across the UK. The worst of the winds are in the middle of the night, but it will be quite an intense, sudden spell of windy weather. The weather warnings are there to give a guide and information so that you might want to adapt or alter your plans. Or just secure parasols, gazebos or outdoor furniture.

“Met Office Amber Warning: There is an increased likelihood of impacts from severe weather, which could potentially disrupt your plans. This means there is the possibility of travel delays, road and rail closures, power cuts and the potential risk to life and property”

Also taken into account are: time of year/day/week. Location and any local events. Underlying ground conditions.

Impacts may include: Injuries and danger to life from flying debris. Some structural damage. Transport routes and travel services affected such as bridges.  Longer journey times are expected.  Disruption to road, rail, air and/or ferry transport. Power interruptions. And significant to this area – “Casualties and danger to life from large waves/beach material being thrown onto coastal routes, sea fronts and coastal communities”

There is a wider yellow wind warning extending over southern coastal Wales, around the Bristol Channel and along the English Channel past the Isle of Wight.

The 'Name our Storms' project was started to raise awareness of severe weather events, to highlight the possible impacts and hopefully give clear, useful information about the forecast so that people can make informed decisions. If you are camping in Cornwall this week, take heed. The main windy time will be Thursday evening through Friday morning with the worst of the winds in the small hours for the far SW.

Thread for #NameourStorms , Is it a good idea?