So, that's it for the heatwave with yesterday the last day that 30c is likely to be breached for a little while at least. There is still going to be plenty of very warm, sunny weather around this weekend - particularly in the northwest of the UK. Further south, the breakdown got underway yesterday evening and overnight with low pressure arriving onto the scene, bringing heavy rain and thunderstorms with it.

Over 17,000 lightning strikes have been detected over the last 24 hours, and although many of them were out over the sea, some parts of southern England, south Wales and Ireland have caught some spectacular thunderstorms.

The pattern of southern parts being in the firing line for showers and thunderstorms will continue this weekend. Those further north and west will see the best of the sunshine, and those near to the east coast will tend to see a fair bit of cloud coming in off of the North Sea, which'll keep things that much cooler.

Those in the sunnier north and west won't be entirely immune from the threat of showers or a thunderstorm though. As the heat of the day, converging winds and, in the case of western Scotland, the mountains, aid the development of isolated downpours. A storm forecast has been issued for today to cover the convective threats. Frequent lightning, hail and torrential rain are again amongst the risks, although not everyone in the risk areas will see those. 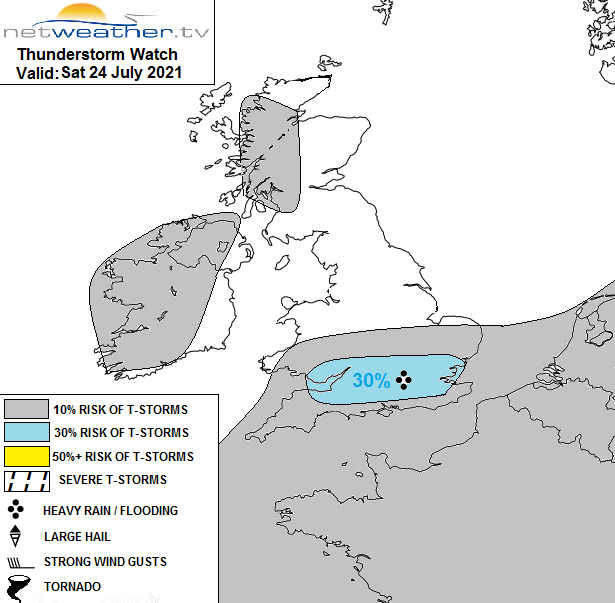 Maximum temperatures won't be too dissimilar on both Saturday and Sunday this weekend, reaching up into the mid or high twenties inland across a good part of both Southern and Northern Ireland, through western Scotland and into Northwest England. Elsewhere the low to mid-twenties are likely, away from eastern coastal regions that is, where the high teens may be about your lot. So, not heatwave territory anymore but still warm or very warm for the majority. 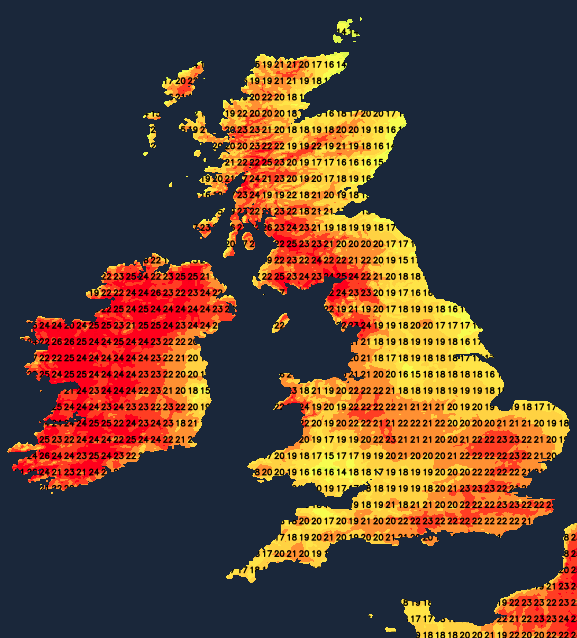 There will be some differences when it comes to the shower and thunderstorm risk through the weekend. Today (Saturday) sees much of southern England and south Wales under threat of catching a downpour, but by Sunday that risk becomes more focused on the southeast corner and East Anglia as the low pressure responsible moves east through Northern France. We will need to keep a bit of a watch on another low pressure system in the North Sea later on Sunday as well, which may bring some rain and showers into Northeast England and perhaps also Eastern Scotland.

Elsewhere Sunday will be mostly dry with just the outside risk of a shower or storm, with those in the north and west enjoying the best of the sunshine as that low pressure in the south throws a fair bit of cloud north across eastern, southern and central England.

Looking ahead to next week, we're staring down the barrel of quite a steady decline towards much less settled conditions, countrywide. Monday looks likely to see two main showery areas - the south and the northeast. But by Tuesday and Wednesday, the threat of thundery downpours will be widespread. The rainfall forecast for Tuesday sets the scene. 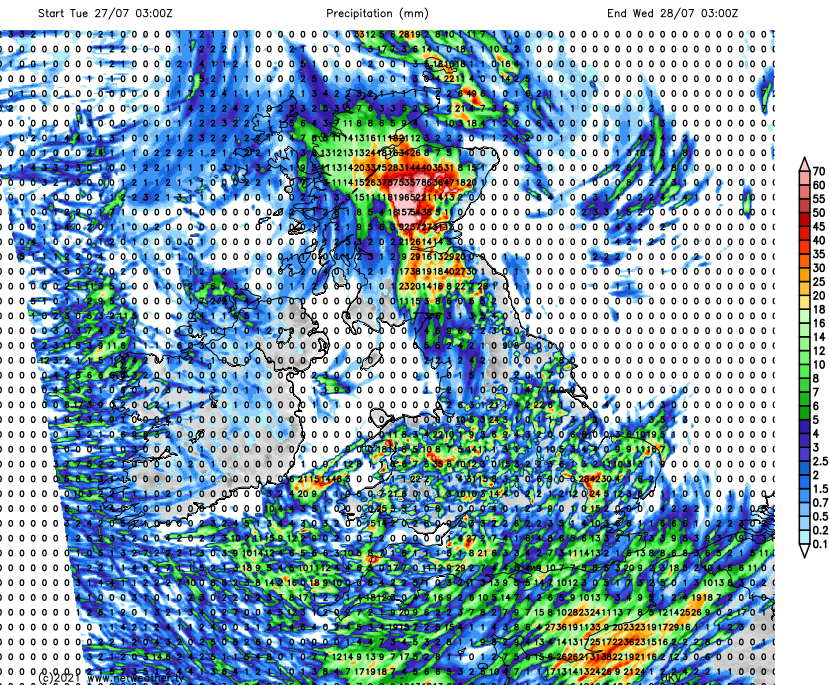