Week Ahead: A mixed bag as Atlantic based weather plays more of a role

After a few days of a lot of our weather coming up from the south, there is a change on the way as we head through the new working week, as it starts to come in from a more typical westerly, Atlantic direction. That's obviously not the best direction if you're hoping for a return to proper summer weather. But even though there will be some rain, high pressure won't ever be too far away, meaning there will be some drier, sunnier spells.

The high in question is the Azores high, a traditional deliverer of fine, summery weather to the British Isles when it can ridge right over the top of the country. As it stands, though, it's mostly going to stay out to the west or southwest of the UK and Ireland, with just occasional forays further east, meaning Atlantic systems will occasionally be able to make their way over the top of it and down across the country. 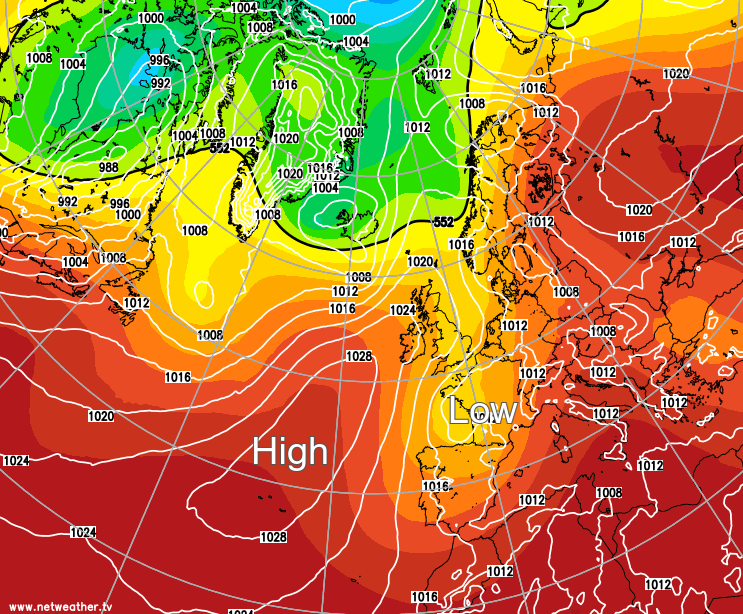 For now, though, that southerly influence is still with us. It brought another batch of rain up from the continent yesterday evening, including some storms that clipped Kent. That's all continued north overnight, fragmenting the further north it's got, which'll culminate in a cloudy day for most of England and Wales. There will be some bits and pieces of rain about as well, and some sharper showers are likely to develop in southern regions into the afternoon too.

Further north, Scotland is already into more of an Atlantic influence, with winds blowing in from the northwest or north today. Not that it'll make a great deal of difference on the ground, as the weather will be similarly cloudy, with a few outbreaks of rain in places. The far north and northwest of Scotland should see some clearer, sunnier weather arrive later, though, as will parts of Northern England. It'll be a cool feeling, mid-teens type of day for most - but more humid highs of 18-19c are likely in the south and should the sun come out for any length of time elsewhere, the high teens are also a possibility.

We need to look south again overnight tonight as another batch of potentially heavy, perhaps thundery rain makes its way up from the continent into southern England. The rain will become more showery during Monday but is set to hang around all day. 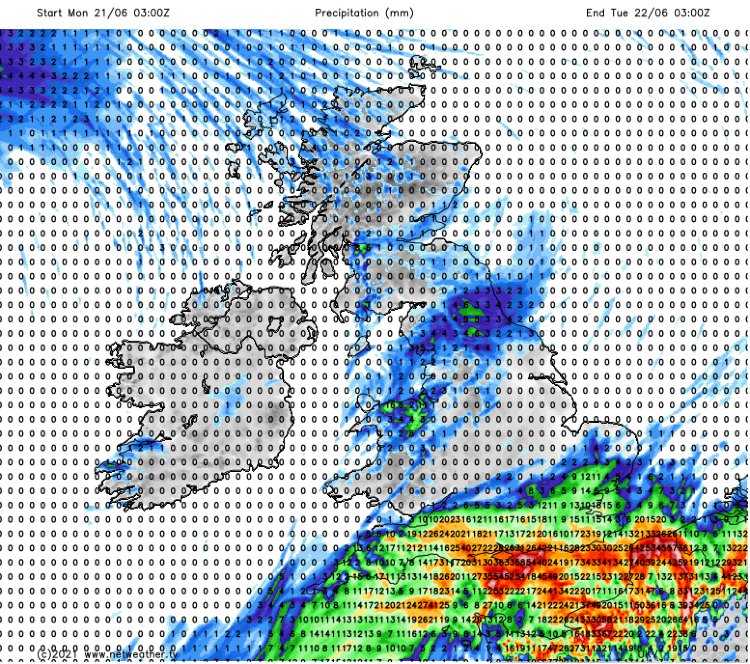 Forecast rain accumulation from 3am Monday to 3am Tuesday

Elsewhere on Monday, that changing of the guard to more Atlantic based air will be occurring with a weak weather front moving down from the northwest, clearing Scotland early on, before slowly moving down through into England and Wales. There'll be some patchy rain along it, and it'll be cloudy under and ahead of it, but once it's cleared, the sunshine should breakthrough, with just a scattering of showers.

The showery, heavy, and potentially thundery rain is liable to affect some central southern and particularly southeastern parts of England into Tuesday. But North of that, with a nose of high pressure in play, for most, it'll stay dry with long sunny spells. Head into the far northwest, though, and another Atlantic front will be showing itself, bringing some outbreaks of rain into the afternoon.

Wednesday sees that Atlantic front squeezing the fine weather further southeast, but probably not fast enough to stop many in central, southern and eastern regions from enjoying a sunny, warm day.

The rot won't be stopped, though, and weather fronts and maybe even a small low pressure move southeast through Thursday and into Friday, bringing some potentially heavy rain with them as the high pressure gets squeezed away. But behind all that, the high pressure looks set to have another go at ridging overhead or near western and northern parts.

So, a mixed week ahead - thanks to that Atlantic influence, there will be some rain around, some of which may well be heavy and thundery, but it'll not be a total washout as high pressure steps in to settle the weather down at times.