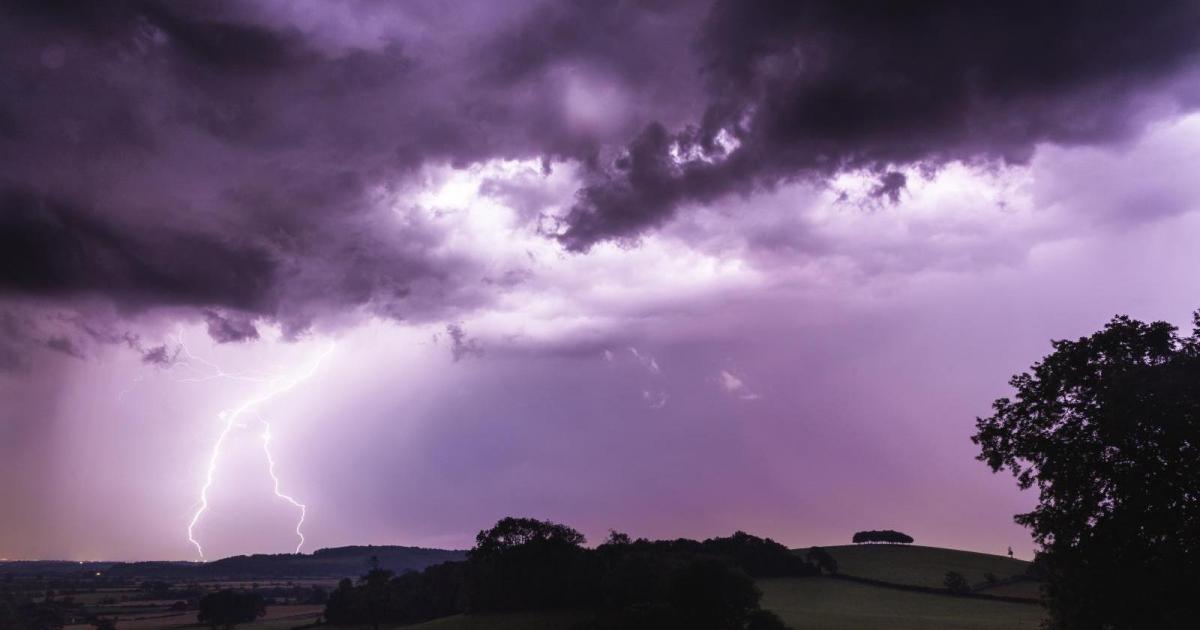 Heat is back for SE UK today, but lively thunderstorms loom for overnight

After the hottest day of the year so far on Monday, reaching just shy of 30C in west London and temperatures peaking at 26.6C yesterday, again in west London, today will bring another fine, sunny and very warm day across southern, central and eastern parts of England. Today may even surpass Monday as the hottest day of the year so far, with 30C possibly being reached in the southeast. A Spanish plume of warm and humid air will surge north out of France across southern and eastern England today, allowing heat to build this afternoon. Meanwhile, a weakening cold across southern Scotland and N. Ireland this morning will transfer across northern England and Wales through the day and will grind to a halt, the front will bring cloudier skies and occasional bursts of rain. Cooler and fresher conditions following across Scotland and N. Ireland – with a few scattered showers. 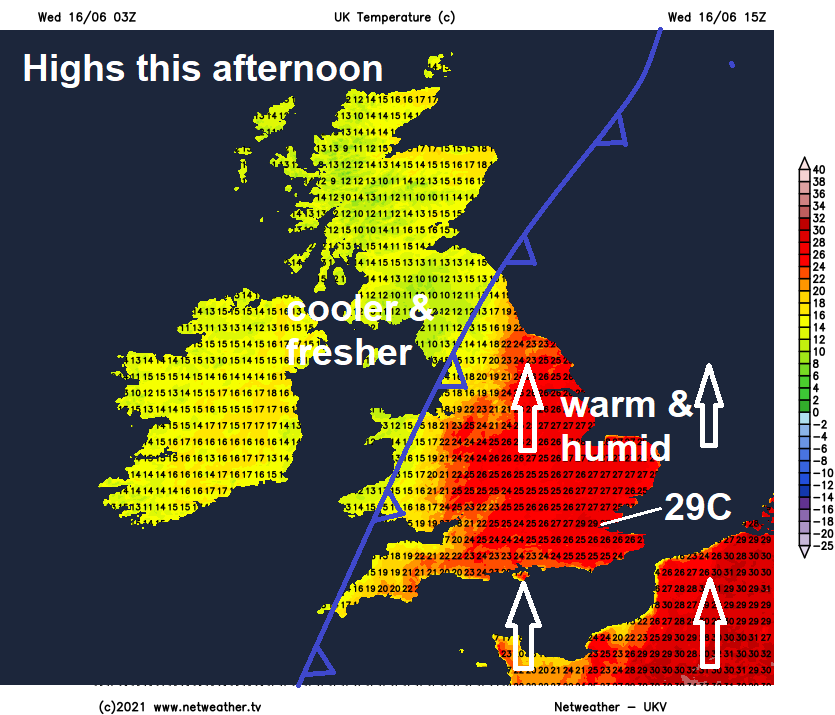 But after a fine, sunny and very warm or hot day, trouble is brewing later today for southern, central and eastern England – the Spanish Plume moving in here today will destabilise from the southwest later today, as cooler air overruns the plume aloft with approach of an upper trough moving into the west. Thunderstorms developing over the Bay of Biscay and NW France today look to spread northeast across the English Channel then SE England and East Anglia later this evening and overnight. Perhaps areas further west hearing some rumbles and seeing some flashes with some bursts of rain too. The thunderstorms moving northeast may merge to form what’s called a Mesoscale Convective System (MCS) east of a line from the Isle of Wight to The Wash, bringing a threat of prolonged intense rainfall leading to localised flash-flooding, frequent cloud-to-ground lightning and locally gusty winds. For a more in-depth analysis of the thunderstorm threat, a Thunderstorm Watch has been issued.

Wednesday night storms across SE England, East Midlands, Lincolnshire and East Anglia look to clear out into the North Sea Thursday morning. That cold front lurking across northern England and Wales today eventually moves southeast Thursday morning and tries to clear away the plume from SE England and East Anglia, but never quite does it. So, it will likely remain overcast near this front, with showery bursts of rain in places across much of southern and eastern England. SW England, Wales, northern England, N. Ireland and Scotland brighter, cooler and fresher with sunny spells, though showers affecting western Scotland and N. Ireland. 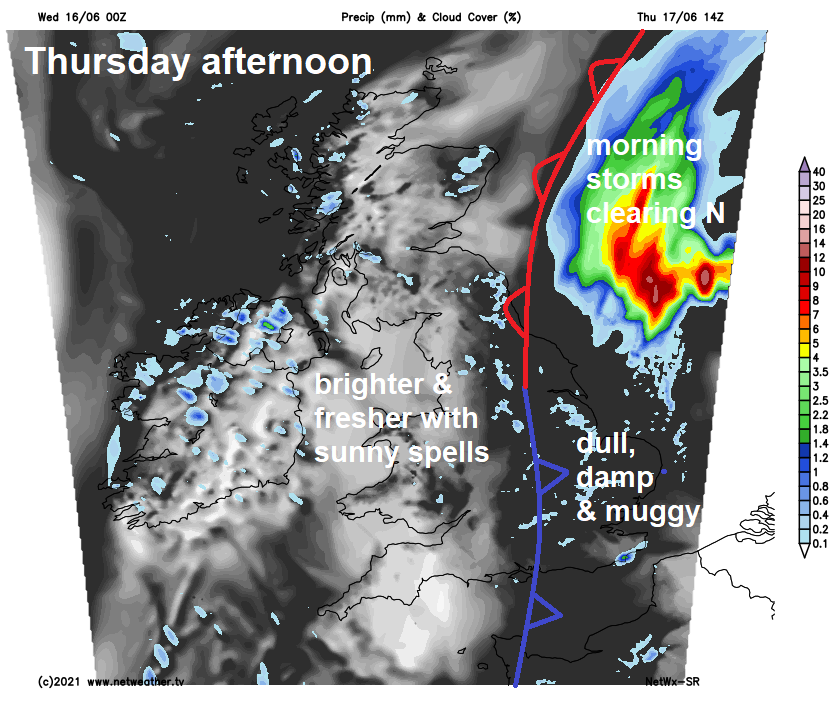 The cold front stalling over SE England and East Anglia, separating warm and humid air to the east and cooler, fresher Atlantic origin air to the west, looks to become a warm front which will move back north and northwest on Friday. This is due to the flow backing again ahead of a shortwave trough / thundery low moving north over France Thursday and introducing an increasingly unstable warm/humid plume again across the southeast for Friday. With the return of unstable warm humid air, a risk of further heavy thundery rain pushing north across the English Channel from France during the day. Some uncertainty over extent, this thundery rain may get as far west as the Bristol Channel and East Wales and far north as northern England, but greatest risk of thunderstorms for SE England and East Anglia. A ridge of high pressure extending northeast from the Azores across northern Britain will bring a mostly fine, dry and settled day for west Wales, N. Ireland and Scotland. 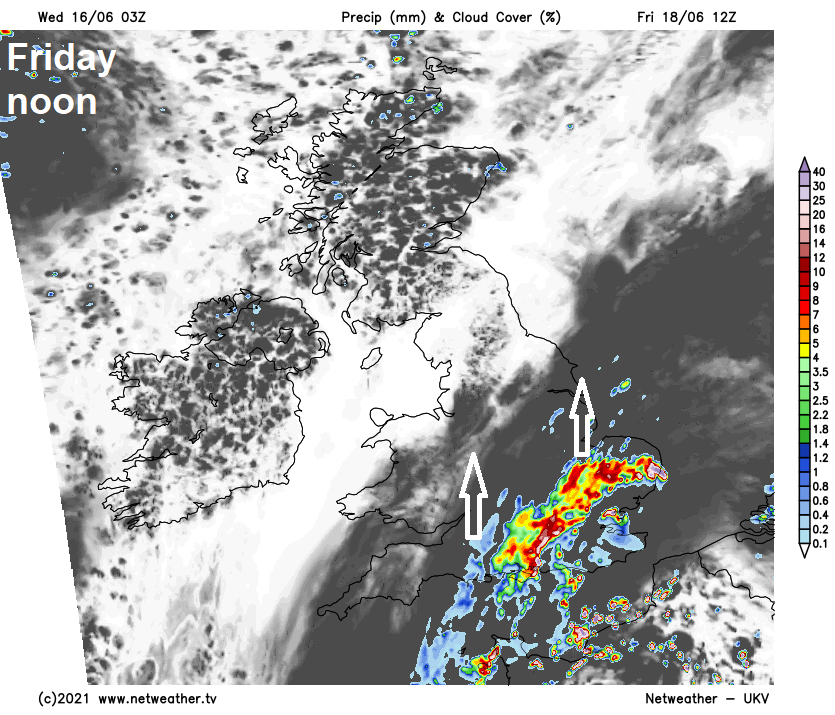 Friday's thundery rain clearing away out into the North Sea Friday night/early Saturday, with drier, cooler and fresher conditions pushing in from the west for Saturday, with a ridge of high pressure building in. But further Atlantic upper trough disruption over the weekend against upper level high over southern and eastern Europe will likely back the flow again and send another thundery low north across France towards southern UK, bringing a possible threat of thunderstorms later Saturday and into Sunday.