This weekend a wave of heat will surge up through the UK adding to the already warm and humid air. The southwesterly flow includes a lot of low cloud and murk for western coasts but in the sunshine, temperatures continue to leap up. That warmth will remain by night and so by Sunday, temperatures could reach 30C in the southeast.

Southeast Britain will have several days and nights of heat and high humidity. There will be warmth for Friday evening if you are sitting outside. The surge of even warmer air builds through Saturday and will hold on through Sunday, perhaps into Monday as fresher air appears behind a cold front away to the northwest. 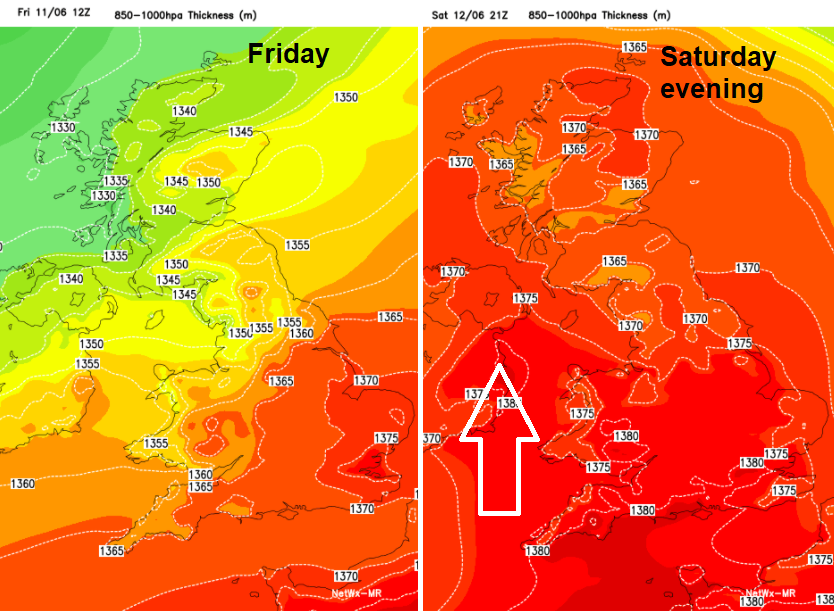 This could meet the Met Office heatwave criteria of three consecutive days at or over set threshold temperatures, differentiated by county. London’s is 28C, with England varying 27c to 25C. Wales, Scotland and Northern Ireland all have a threshold of 25C. A few spots could reach these temps on Thursday, maybe Friday. There is some uncertainty due to the lingering cloud out west. By the weekend, in the warmer air, it is more likely that these threshold temperatures will be matched or passed but it’s whether a county will see 3 days in a row. It’s all rather academic anyway. It will feel hot and sultry for SE Britain for several days and very warm for other parts of the UK until this shift from the north.

However, the continuing low cloud will make it feel cooler and fresher for western Britain on Friday evening, NW Scotland on Saturday as a front passes by with blustery winds. And by Sunday there could be quite a contrast with the heat and sunshine over SE Britain but frontal cloud and rain to the NW.

The westerly flow of Friday evening will just bring some fresher air over the UK. Sheltered Essex, Suffolk and Greater London will stay warm overnight around 15C but for inland Scotland and Northern Ireland temperatures will fall down into single figures. The breeze keeps up for the Highlands which is good news for keeping the midges at bay, but the weather will be unsettled in the far NW and blustery on Saturday. Otherwise, the high pressure does its job and brings a lot of fine, dry weather with sunshine. It will be warm with light winds. Remember to pack the sunscreen.

There is this shift on Sunday, so mild overnight but then blustery winds, cloud and patchy rain sinks down over Northern Ireland and western Scotland during the day. Reaching NW England by the evening. This process may slow down, the front looks to fade and weaken during the day as it butts up against the high. So don’t discount everything yet if your weather app looks discouraging for Sunday.

Sea Surface Temperatures are still around 10 to 15C. The Algarve is closer to 18C, Cyprus 23 but no-one wants to know that now.

For Saturday, southern Britain will be warm and sunny with sea breezes pick up in the afternoon, so a light onshore breeze, just tempering the inland warmth. Any early low cloud and coastal mist should dissolve away. Again, light winds on Sunday with a slight SW tilt. So, around The Wash will see mid 20sC whereas coastal Devon could be around 21C. Morecambe Bay will be feeling fresher, but Whitely Bay and Tynemouth should be warm at 19C.

The second test begins this week for England versus New Zealand at Edgbaston. Plenty of warm dry weather to come into the weekend. There will be lengthy sunny spells and temperatures into the 20sC. Winds will be light, and it looks quite ideal for cricket spectators.

The Euros start on Friday with Wales playing away on Saturday afternoon then England at home Sunday 2pm. It looks to be hot and humid at Wembley with temperatures in London forecast to possibly reach 30C. 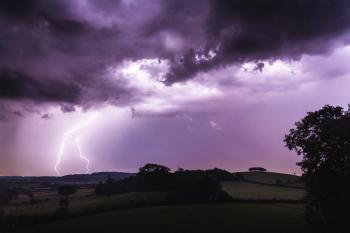 The heat holds on for Southeast before the Thunderstorm Parade begins