Rinse and Repeat as the showery spell continues

In a period that harbours the ‘Ice Saints’ of St Pancras (12th), Servatus (13th), and Mamertus on the (14th), the prospect for fine, warm weather over the next few days hardly looks promising. And so it will prove, in a very unsettled, showery period, that’ll eventually end up on the cool side again for mid-May.

We have bursts of rain over central Scotland that'll clear to the North, with the Northern Isles mostly dull, cold and wet at times. From the Midlands northward, it's a fine, quite sunny start, but there are already a few showers in the South. As cloud builds through the morning, showers will develop quite widely, with some like yesterday becoming heavy, giving local thunder and hail by the afternoon. Across the South West and perhaps the Channel Islands, some hefty, lengthy showers may occur later. But such is the nature of showers that some places will see more than others, with parts of northern England and southern Scotland best placed to miss the showers altogether.

A southerly wind will be lighter than yesterday but fresh and gusty in the vicinity of heavier showers when it may feel a little chilly. But in the sunny intervals between times, temperatures should reach 16 or 17C in the East and South-East and around 14 or 15C more generally. Across Orkney though, you’ll get no higher than 8 or 9C in misty conditions at times.

Further showers are expected into the evening, some heavy at first. Over the South West, West Country, along the South coast and across parts of Wales, scattered showers will continue into the night, while most other parts see the showers become fewer and lighter generally. Central, northern and eastern areas see a few clear intervals, and with lighter breezes here, it could turn a little chilly in some sheltered rural areas. A frost is unlikely in a relatively mild night in the West and South, with the lowest temperatures in the range of 4 to 8C.

Wednesday will be just as unsettled with a large area of low pressure and several troughs straddling the country. There’ll be sunny intervals but expect to see a lot of cloud at times in another disappointing day for May. Further showers are likely some again heavy with the risk of local hail and thunder, although some places will fair better than others. 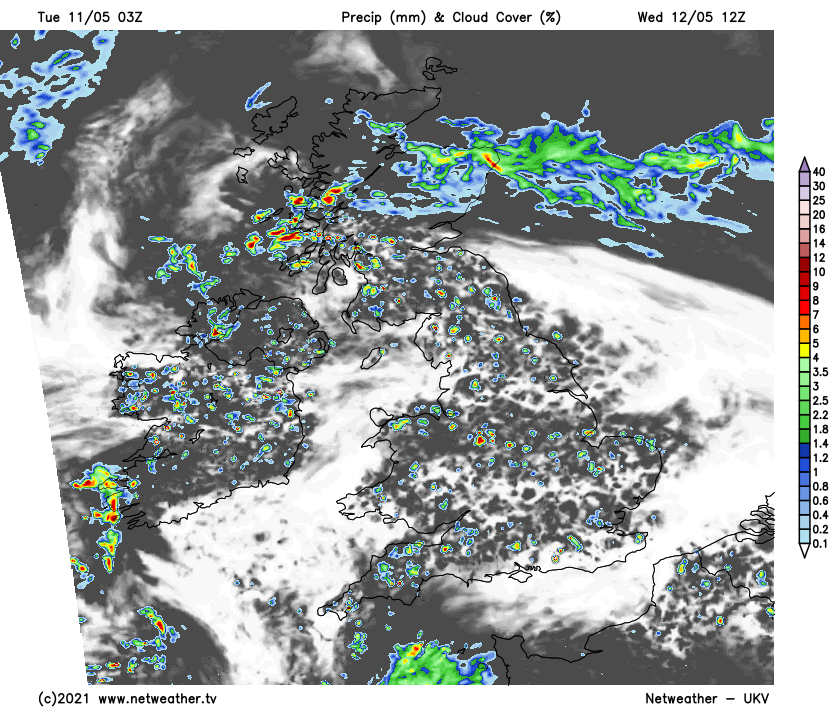 Although still gusty in heavier showers, winds will generally be light, making the showers slower moving and, therefore, quite lengthy at times. During the afternoon, an Atlantic system could bring a longer spell of rain heavy in places to the South West and later the Channel Islands. It may also end up slightly cooler, with top temperatures 11 to 13C in the North and West and 14 to 16C elsewhere.

Bursts of rain could spread to much of southern England into the evening, but this should clear to just a scattering of showers overnight. Wales and Northern Ireland may also see some rain after dark, but the showers should become fewer and lighter through the evening for most other parts. While spells of dry weather shouldn’t be trusted, skies will break in places, and with winds mostly light, a few mist patches may form in rural areas towards dawn. Although turning chilly in a few rural spots, it’ll be another largely frost-free night, with the lowest temperatures mostly between 3 and 8C.

It remains unsettled for the remainder of the week and into the weekend. Further showers and some longer spells of rain are expected as low pressure continues to dominate. Sunny intervals will be mostly at a premium, with temperatures generally remaining on the disappointing side for mid-May. 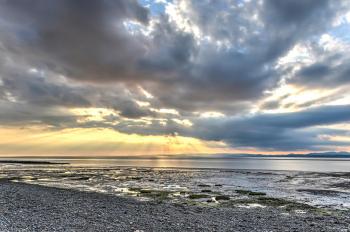