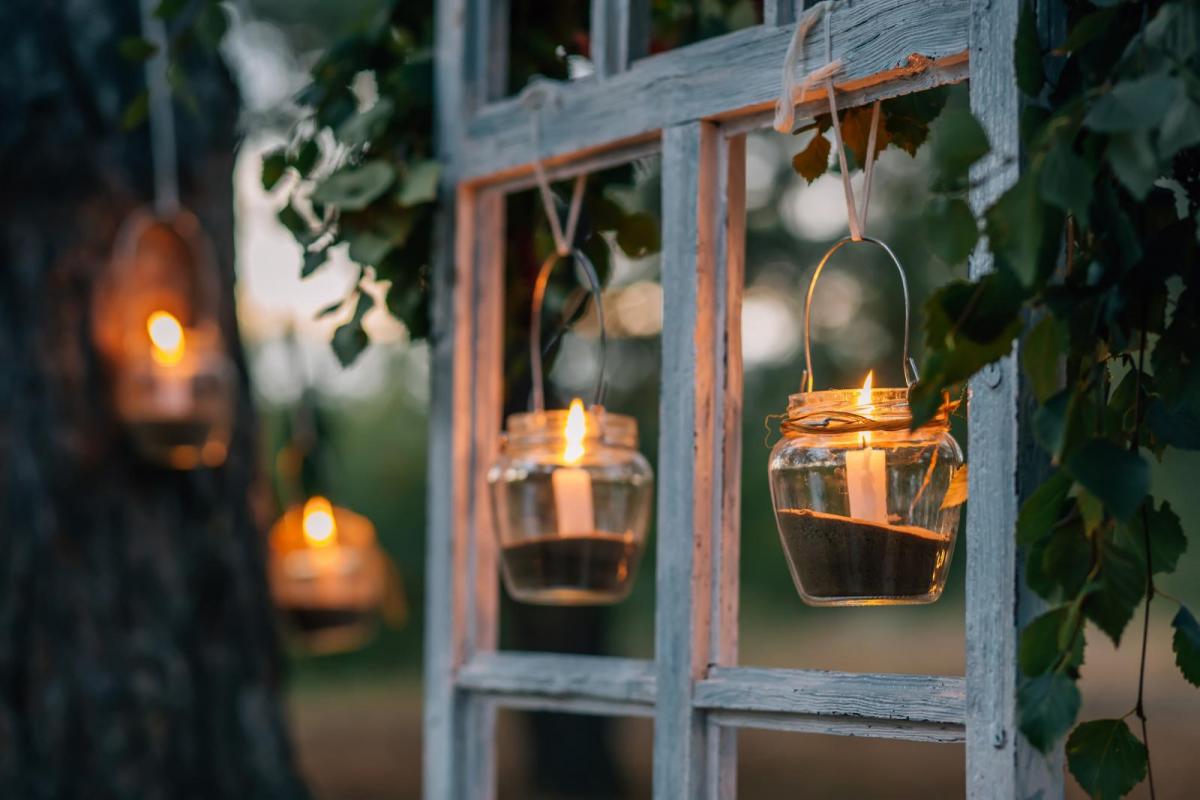 There has been a change in the weather. It’s started raining there must be a Bank Holiday coming up. Most of April has been exceptionally dry and it has been colder than average and the frostiest April on record. All that thanks to lingering high pressure bringing clear skies with strong sunshine by day, frosts by night but keeping a nip in the air.

If you are keen to take advantage of the new found freedoms, to move about the UK over the long weekend, then you might be keeping an eye on the forecast for day trips, overnight household camping, hikes, rides even picnics in the park. We seemed to have resigned ourselves to keeping the big coat to hand and having thermal layers and a thick jumper for any evening outing. There is no change for the start of May. 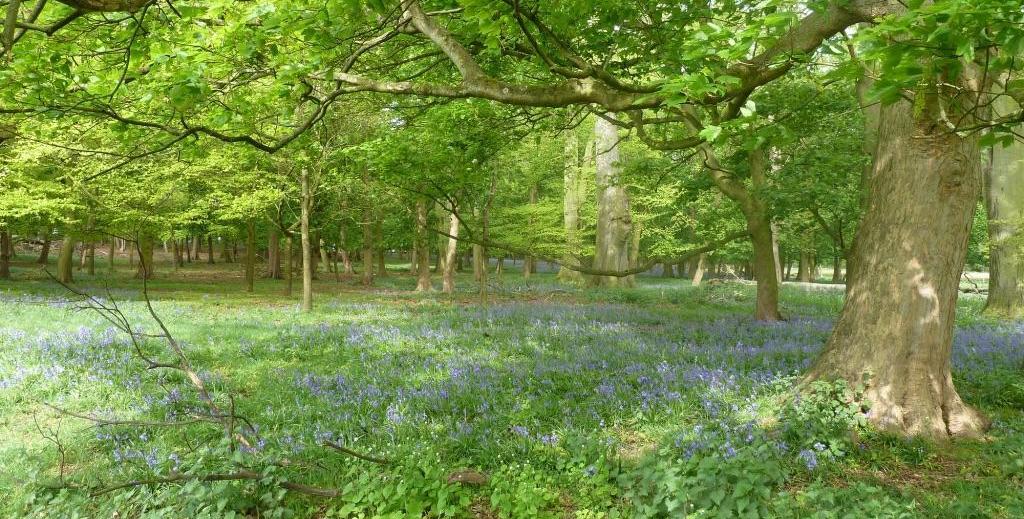 Saturday and Sunday look similar with a cool flow from the NE, sunny spells which will give real warmth if you are sheltered from the breeze. The scattering of showers continues. The distribution of these downpours will alter each day and keep you on your toes. Don't be fooled if you look outside at the start of the day and just see brightness. Monday has more uncertainty in the forecast but the charts on Thursday 29th show a low pressure heading right for the UK with proper frontal rain and strong winds, even a mention of gales and high gusts. That would be real UK bank holiday weather, especially for those heading to the beach.

The air remains cool, cold even as a shower passes by or after dark. By day, Sunday will see temperatures move a degree or so up on Saturday around 10 to 13C then 12 to 15C. Yet feeling very warm in any lengthy sunshine. And it is that contrast that has been so confusing over recent weeks. The sun can feel hot in sheltered spots, you’ll certainly need to put on sunscreen just in case, but the cloud can move in, a shower or two and it’s back to just 'okay' conditions. 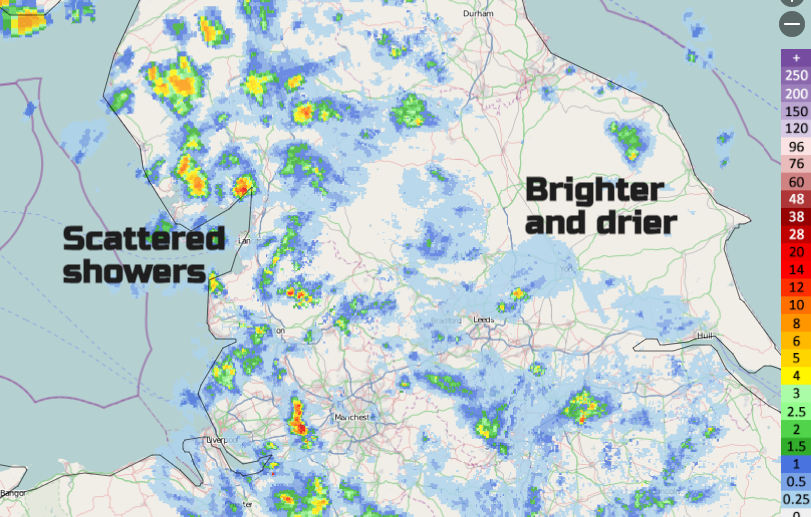 So worth choosing your location for a day trip or picnic lunch. Nowhere too exposed, find a bit of shelter but keep the direct sunlight.

If you have already been to the pub in the evening or sat outside at a friend's house, then you will know it is cold. Nothing changes this weekend. Without the sunshine, you will need those layers and maybe a woolly hat.

Saturday morning brings very light winds, a touch of frost and bright spells. Many areas will start dry but the showers will get going. You could be lucky and miss them or get soaked as the downpours get going in the morning and at lunchtime. NE and eastern England look prone and SW England. Just take your raincoat and know that the air will have a cool edge to it.

Sunday morning will be nippy again with mostly very light winds, just a light northerly clipping Lincolnshire and cooling north Norfolk. There will be few showers about overall but still hit and miss who gets them. 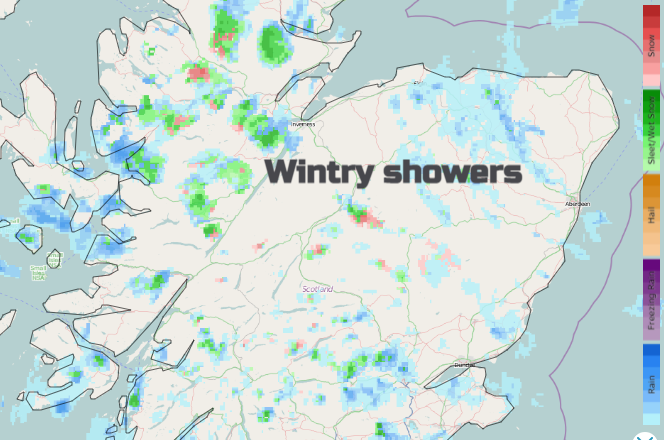 Snow showers over the tops of Scottish mountains in cold airflow

There have already been some wintry showers this week with snow over the Scottish mountain tops. As the cold air continues, there will be some icy rain, sleet, hail and maybe snow at height. Again, the contrast when walking changes from bright warm sunshine to a real chill as the shower clouds gather and a downpour arrives. You might be taking off and putting on those layers often. With frosts by night and the wintry tinge to the showers on Saturday and Sunday do prepare for cold weather before heading off, whatever it looks out of the window.  Winds will be light although more of a chilly breeze for the North York Moors by Sunday morning. The light wind will be from the west by Sunday for the Southern Uplands and Cumbrian Fells and more of a breeze for the Pennines and Cheviots by late afternoon. Air temperatures in single figures for Saturday and Sunday.

If you are heading off for a camping trip, well done for being brave. It will be chilly overnight, but you should be expecting that. With light winds, there will be a frost risk and once the sun goes down it will be cold, expect nothing else from this cold Arctic air. By day, it will be mixed, a scattering of showers but also fine bright, even sunny spells. Your weather app won’t be that helpful in this setup. It can show too many showers or at the wrong time. It reflects a risk of a shower in a model grid square not necessarily right on your head and at the right time. It is reflecting an overall picture of sunshine and showers. 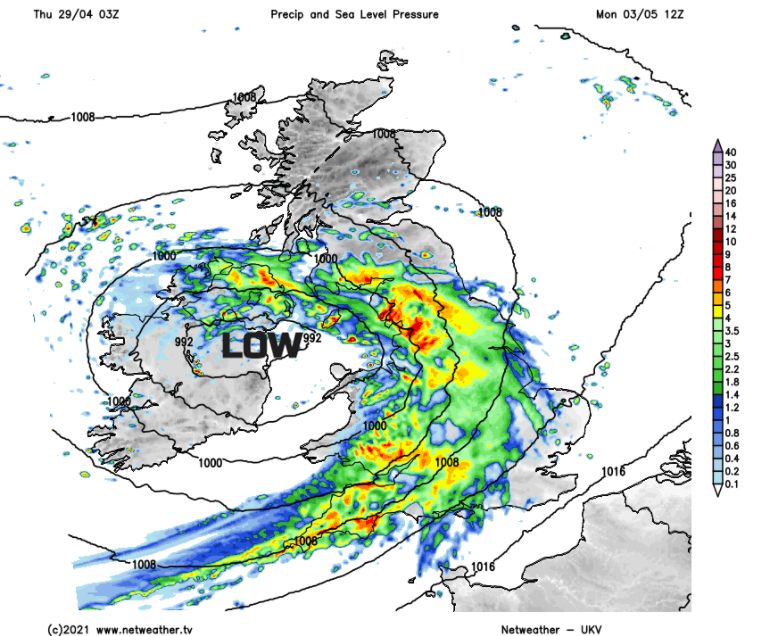 Another cool start with frost in the north but the winds will have shifted to a westerly and an Atlantic low pressure is on its way.

Currently, that low pressure is forecast to move right across the UK during Monday bringing a spell of heavy rain and strong winds. There could be wet snow over northern hills for a time as the frontal band hits the cold air. SE Britain might get away with a dry start to the day, the rain might not arrive until Monday afternoon. But there is some uncertainty here. NE Scotland could also escape the rain and hill snow until late in the day. But, where the front does move through it looks like a significant spell of heavy rain with blustery winds and coastal gales.
This part of the forecast will be worth keeping an eye on. You’ll have to take your chances with the showers on Saturday and Sunday and just wrap up warm against the cold air, but Monday could be quite grim. It depends on the track and the speed of this incoming low.