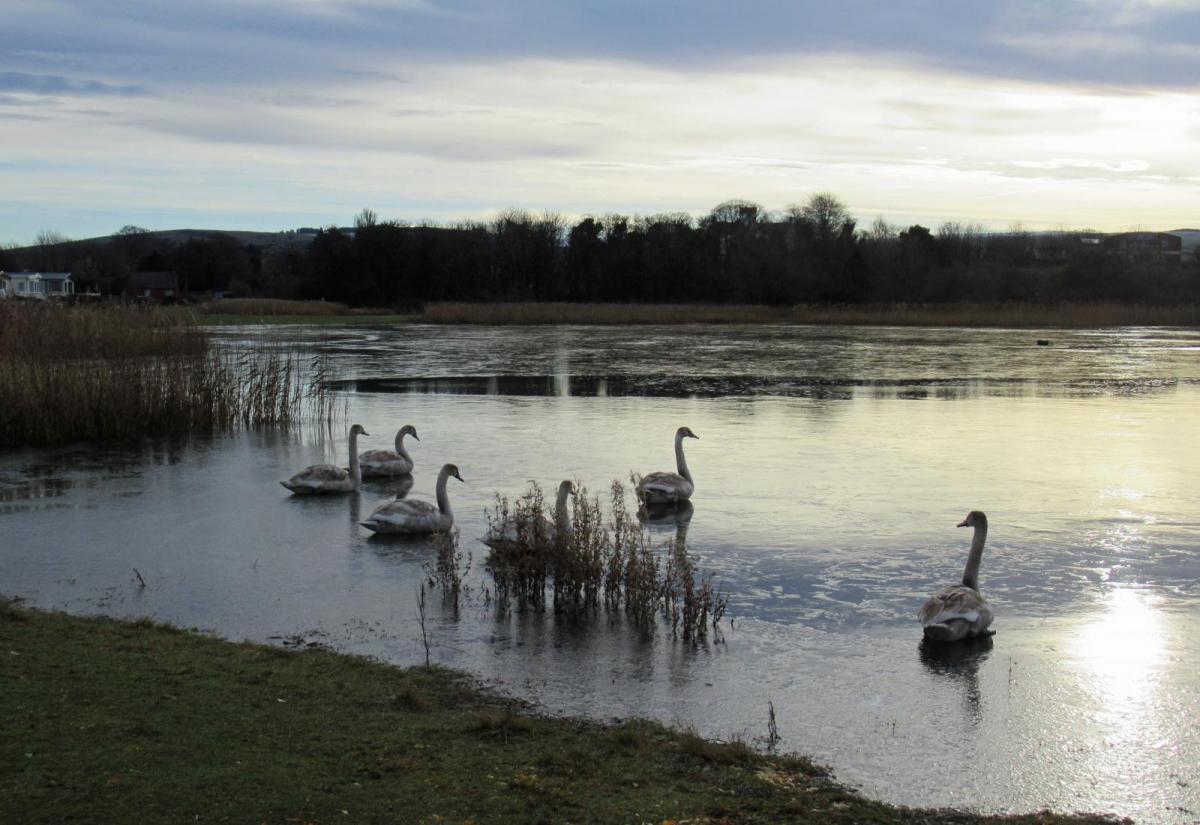 A cold weekend with frost, ice and still a chance of snow

The terrible flooding has already dropped off the top page of news headlines. It is not over yet, but it is much drier now at least. There are still severe flood warnings near Wrexham on the Dee and another one between Crewe and Chester, again for the River Dee. As water continues to make its way down from the river catchment areas up in the hills or flow along the slower-reacting waterways, there are many flood warnings and alerts over Wales and England although not the number from mid-week. There are flood alerts for northern Scotland as strong winds cause coastal spray and wave overtopping around the coast due to Storm Christoph continuing to churn off SW Norway.

This low pressure continues to pull icy or snow showers down from the north and in the colder flow, there is widespread ice this morning and a cold wind. There will be a lot of fair, bright weather around and this wind will ease. However, that means the weekend nights will be much colder with a widespread frost. A deep chill over the UK and some of the standing water will start to freeze. 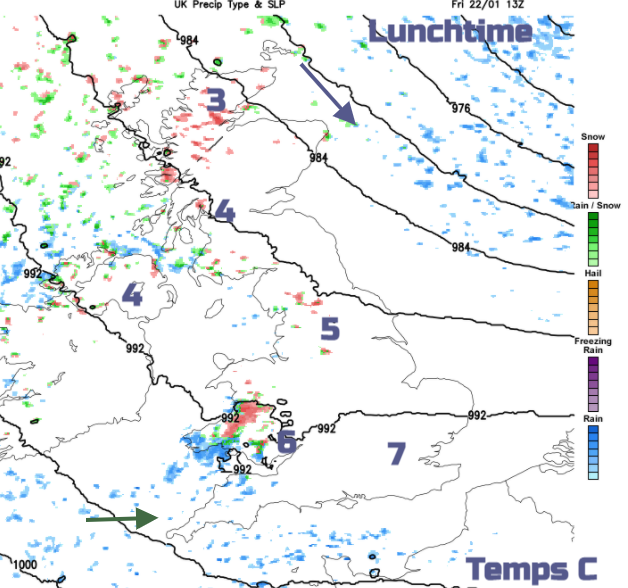 Overall, there will be a lot of fine bright weather this weekend, cold but fair with light winds and thankfully drier. However, there are low pressures lurking. Today southern France and Spain have warnings for Storm Hortense (named by Spanish AEMET), a deepening low which will move over the Pyrenees towards northern Italy and Sardinia. Spain has warnings for strong winds, heavy rain and all this region has concerns for melting snow. Madrid still hasn’t thawed out from Storm Filomena

A series of low pressures follow. One on Saturday over northern France which might bring some interesting weather to southern England, another one looks to move from the Atlantic and flow the exact track of Hortense later on Saturday. Following that and with a lot of uncertainty is another little low which looks to swing in over southern Ireland and the English Channel and could bring snow to Britain. 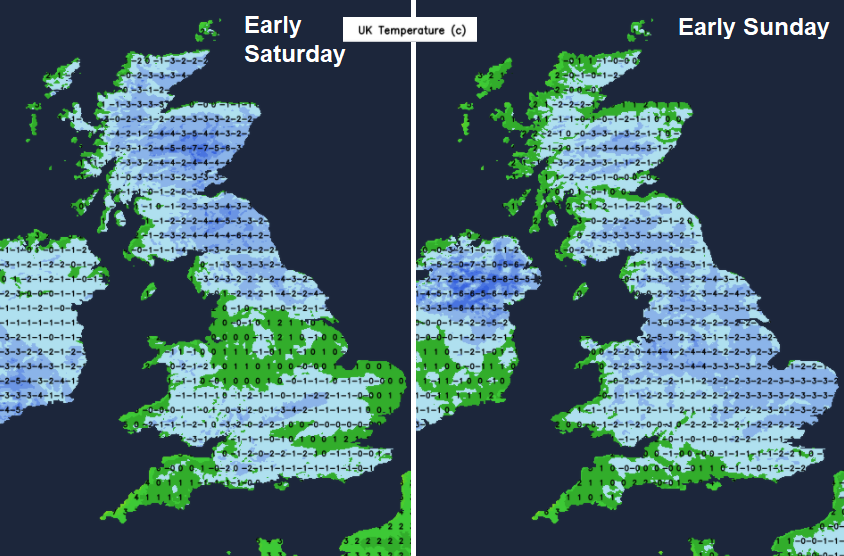 We are in much colder air throughout the weekend. 516dam showing on the 500-1000hPa thickness charts and a widespread frost under clear skies with light winds. Day time temperatures settle around 3 to 5C although today southern England could see 7 or 8C.

The strong winds and rough seas in the far northeast of Scotland continue for a time today for the Northern Isles, clipping Aberdeenshire. The flow backs more westerly today across the UK with a fresh wind for Cornwall and the Channel Islands, light elsewhere but adding a distinct nip to the air.

Through the weekends the very light winds continue although there will be NW breeze for western coasts of Britain and around Northern Ireland on Saturday and the winds could pick up around this Sunday low. 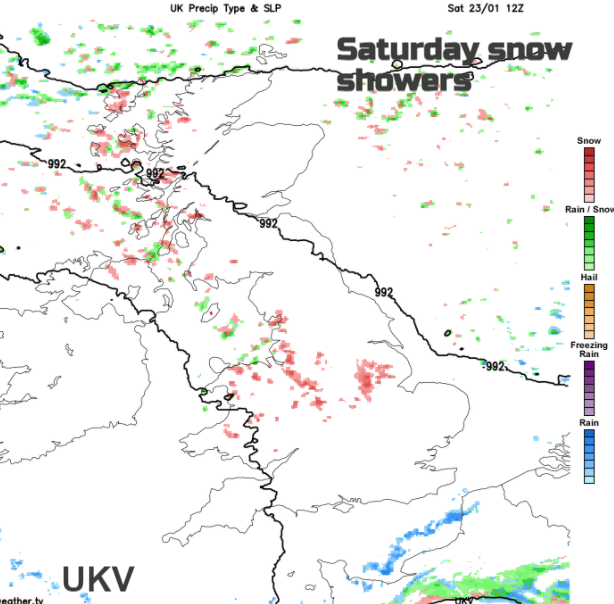 Precipitation – there will be snow showers in the flow today and tomorrow. Flurries of snow passing by, heavier clusters or lines bringing icy rain or wet snow. By Saturday as the air gets colder the snow will be less wet 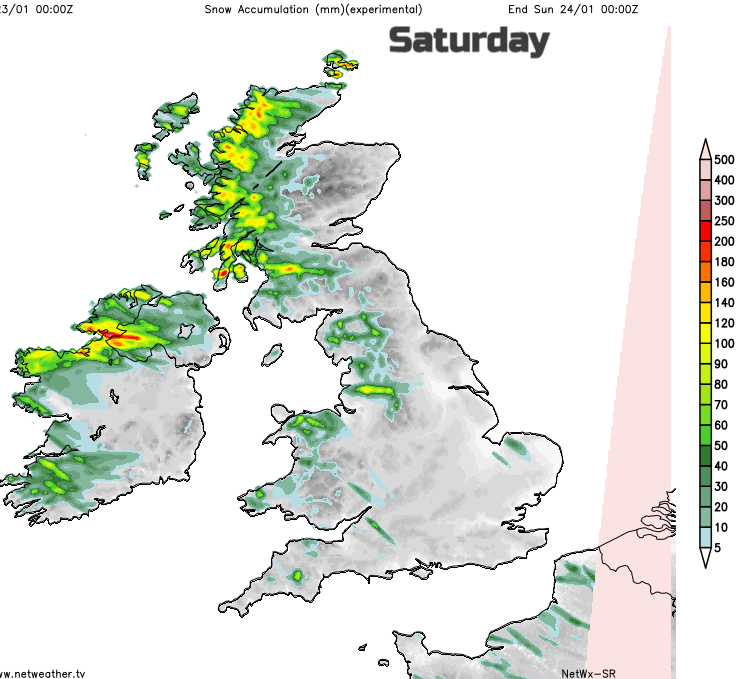 The accumulation chart shows which areas are more likely to see lying snow Friday into Saturday, those exposed to the NW to westerly wind and of course the higher ground. Some showers will make their way further inland so you could see a bit of snow passing by on an otherwise fine, bright day. The UKV model does show up a little something moving over southern Wales this afternoon then plodding eastwards over England to East Anglia by midnight. Almost like a small low centre forms and around this there looks to be rain and snow. Keep an eye on the radar later.

The GFS model makes a bit more of the low pressure over northern France brushing southern England. Showery bits of rain over Cornwall this afternoon and a more wintry mix in the showers over SW Britain by this evening. Then stronger winds for the Channel Islands before it clears eastwards.

Saturday more wintry showers in the flow from the NW with the risk of hail and thunder and then the uncertainty about Sunday. 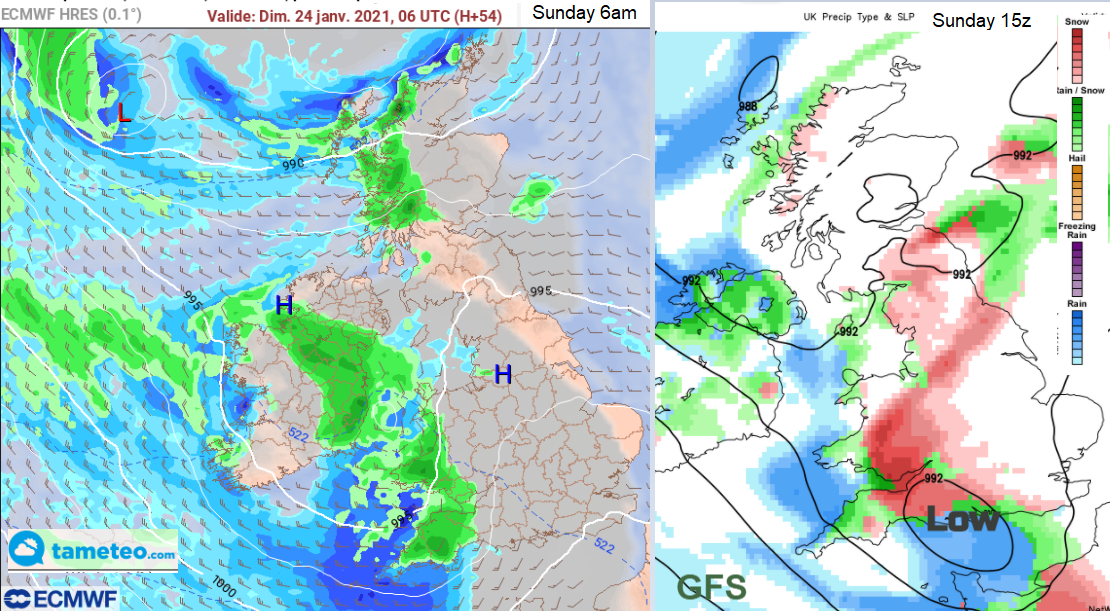 For many another cold, dry day but there will also be snow showers for Scotland. The low pressure skirting around the southwest, it could bring rain and snow over SW Britain, or along southern England, the GFS brings the precipitation further north. With the existing conditions on the ground, any extra rain is unwelcome, but the wintry slant will need watching too. 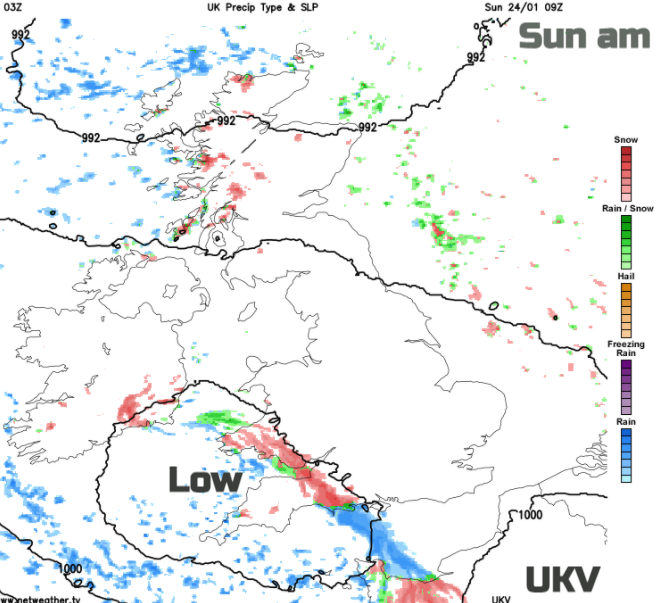 With an Atlantic flow next week, more rain looks likely but nothing like this week.