Heavy rain, gales, flooding, snow - it's all happening this week. It's all thanks to low pressure nearby - currently 2-lows but soon to merge into one: Storm Christoph. The rain and potential for significant flooding is the initial hazard and will be ongoing right through this week.

It's already raining hard across a much of Northern England and into Northern Ireland. It's actually going to be the same weather front waving about over the UK which will keep the persistent rain (with snow in places) coming before finally clearing away during Thursday. It's through that central swathe of Britain where the wettest weather is going to be, with Northern and Eastern England, North Wales and Southern Scotland perhaps likely to be the epicentre, with 100mm, maybe even 200mm or more falling over the high ground, which is bound to lead to flooding issues.

The Met Office has already issued weather warnings, with an amber warning in place for parts of England. But even in those areas outside of the amber warning zone, some significant rainfall totals are likely. 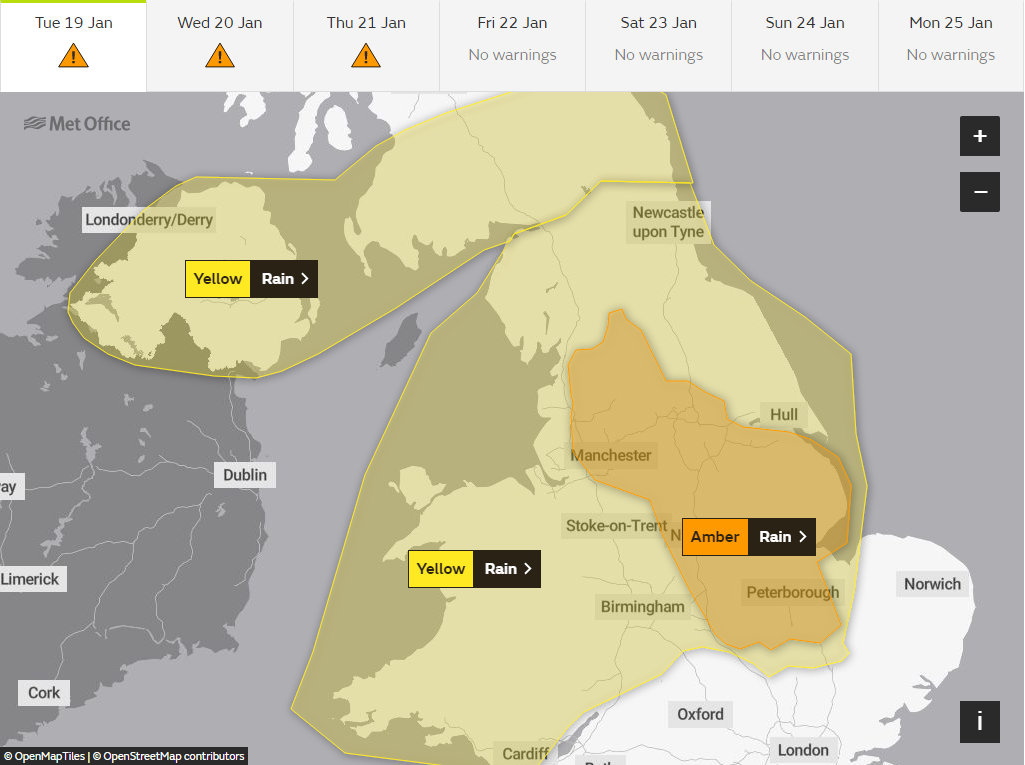 Numerous flood warnings have been issued across the country already, with more sure to follow. If you're concerned about flooding in your locality, please check with the relevant agency:

One of the reasons for the heavy, persistent rain across than central band of Britain is that we have a very pronounced temperature gradient from north to south right now, with that rain sat at the boundary of cold air to the north and much milder air to the south. Temperatures on Tuesday will reach double-figures, widely across the southern half of the country, probably touching into the low teens in southern England. To the north of the rain band though, it's much colder with highs of 2-4c. And that means, even today on the northern edge of the rain, there'll be some sleet and snow over the high ground.

As the week progresses the colder air to the north will actually become a touch colder still, and as Storm Christoph then moves out into the North Sea late Wednesday and into Thursday that colder airmass will be pulled south around its flank. So, into Wednesday the risk is that more of the rain will start to fall as snow, initially probably into southern and central Scotland. Still, later that threat is likely to move south as well, with Northern England, Wales and maybe also the Midlands being added to the mix. Simultaneously, the threat of snow will also extend into Eastern Scotland as well - which is why the Met Office already has a warning here for Thursday. 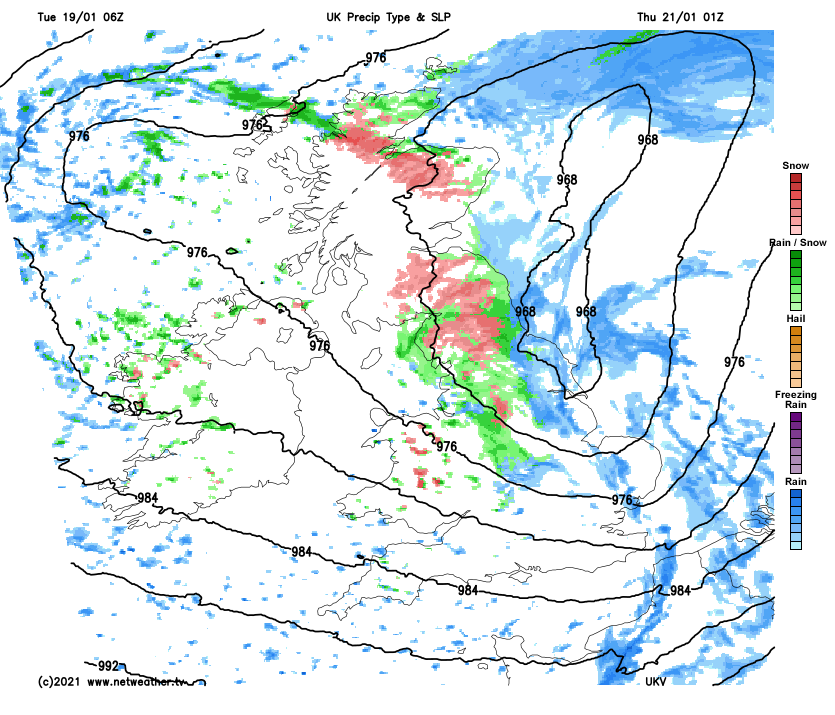 There's a lot of uncertainty over all of this though, so stay tuned to your local forecasts for the latest.

It's already quite blustery under the rain band and south of it today (Tuesday), with gales possible near southern and eastern coasts later on. But it's really only during the second half of Wednesday and into Thursday as Christoph organises into a single more tightly packed low pressure that the strongest winds will kick in. These are likely to affect southern and eastern coasts, with severe gales possible. Again, there's some uncertainty over this, as the low pressure system's precise track and intensity have still to be ironed out.

So, a busy spell of weather coming up, and although the worst should have passed by Friday in terms of the rain and snow, flooding can tend to lag as rivers continue to rise, so please bear this in mind if you're in an affected area. Weather-wise, Friday onwards will be colder everywhere, with sunshine and a decent rash of often wintry showers blowing inland from the west or northwest.