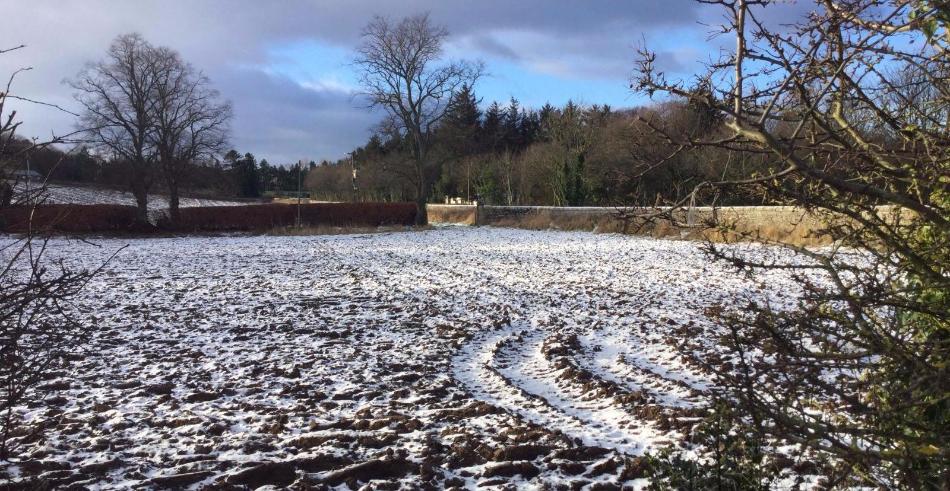 Cold & wintry for rest of the week, but signs of something less cold next week

Last night was the coldest night of the winter so far, with the temperature falling to -12C at Loch Glascarnoch in northern Scotland overnight. Wintry showers will continue towards the east of England today before easing later, otherwise most other areas will be dry and bright or sunny today, but cold everywhere. A ridge of high pressure builds in across the south on Thursday, bringing a mostly dry day. While a cold front slipping south across the north will bring a band of sleet and snow, this reaching southern areas Friday morning, while a cold northerly flow with drier and brighter conditions follow.

The weekend is looking chilly but dry and fine across the south. Cloudier, breezier and turning less cold in the north, with some patchy rain and hill snow. High pressure will decline southwest early next week, allowing Altantic frontal systems to move in from the west, bringing rain and milder air across all parts into Tuesday.

Today has started on a cold note, icy in places, temperatures close to freezing across England and Wales, widely below freezing across Scotland, still -9C to -12C in the northern Highlands at dawn. Most of Scotland and western areas further south are dry and bright to start the day, but wintry showers continue to feed in across eastern areas of England at breakfast time, falling as snow as they drift inland across northern England and across the Midlands. Across the SE of England more persistent outbreaks of rain, sleet and snow continue from the early hours of this morning, which have brought a covering of snow over higher ground, such as the North Downs. So some icy stretches on untreated roads to watch out for.

Further wintry showers will continue at times towards eastern and southeastern areas of England through the day, but tending to ease and become more isolated through the afternoon. Otherwise a mostly dry and fine day with sunny spells, but cold everywhere. A cold front arriving from the northwest will introduce cloud and rain across the Western Isles and far NW Scotland by early evening. Temperatures reaching 2-5C generally, lighter winds across eastern England where there was a strong northeasterly yesterday.

A cold front with a band of sleet and snow, rain on coasts, will slide south across Scotland and N. Ireland this evening and overnight, snow falling even to lower levels inland, with some accumulation of snow on roads could lead to some treacherous driving conditions overnight. Further south across Engand and Wales, any showers dying back to eastern coasts, to leave a dry night, with clear skies leading to a widespread sharp frost developing. Some freezing fog patches developing across central and southern areas too, as winds fall light. Lowest temperatures across the north and west - where they could fall to -7C. 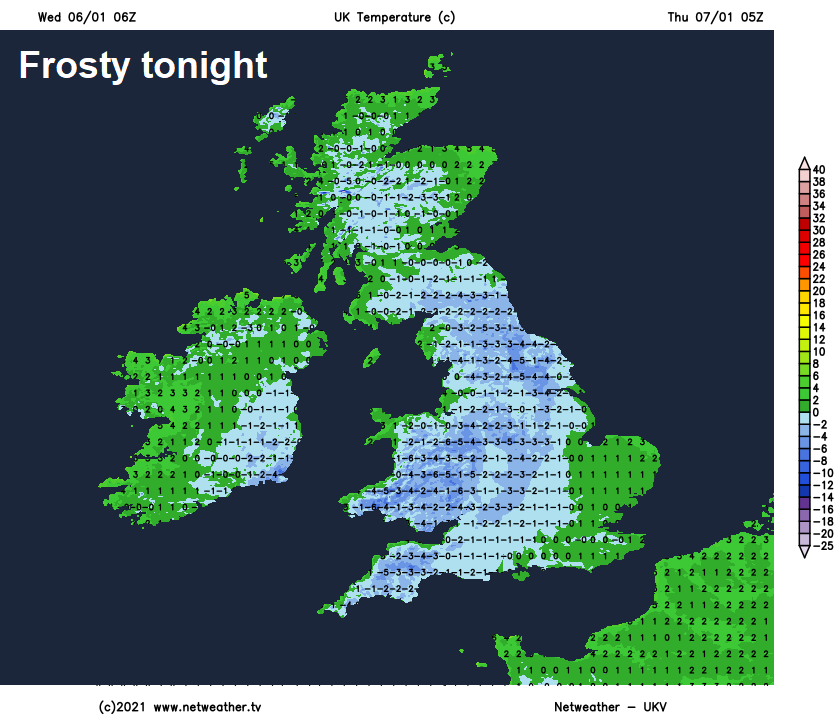 A cold and frosty start for most on Thursday, freezing fog patches across central and southern areas could be slow to clear through the morning, thanks to little wind. Otherwise, a mostly dry and fine day with sunny spells across much of England and Wales. Northern England northwards: a band of sleet and snow continues to slip south across central and southern Scotland through the morning, before reaching northern England through the afternoon, weakening as it does so, but giving a light covering of snow inland. Brighter skies following across Scotland through the day, but with a strengthening northerly wind and wintry showers across the north. A cold day, temperatures reaching 2-4C at best. 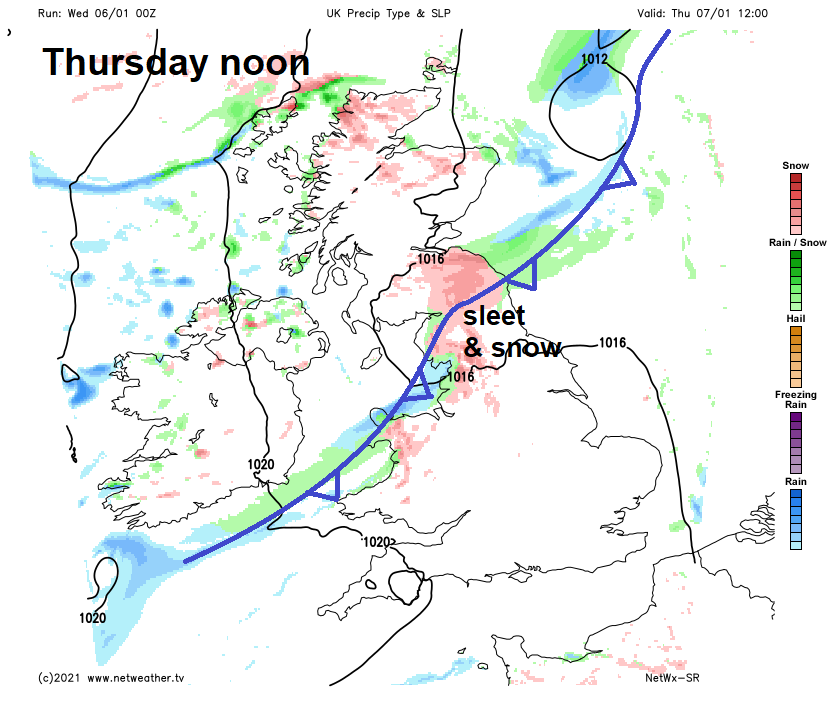 A weakening front will continue south across Wales, central and southern England on Friday morning, bringing some patchy light snow in places. Otherwise, brightening up from the north leading into a dry and bright or sunny day for most. However, another band of sleet and snow associated with a low over the North Sea could move down across the eastern side of Scotland and NE England through the day, bringing some accumulations. Another cold day, temperatures reaching 2-4C. 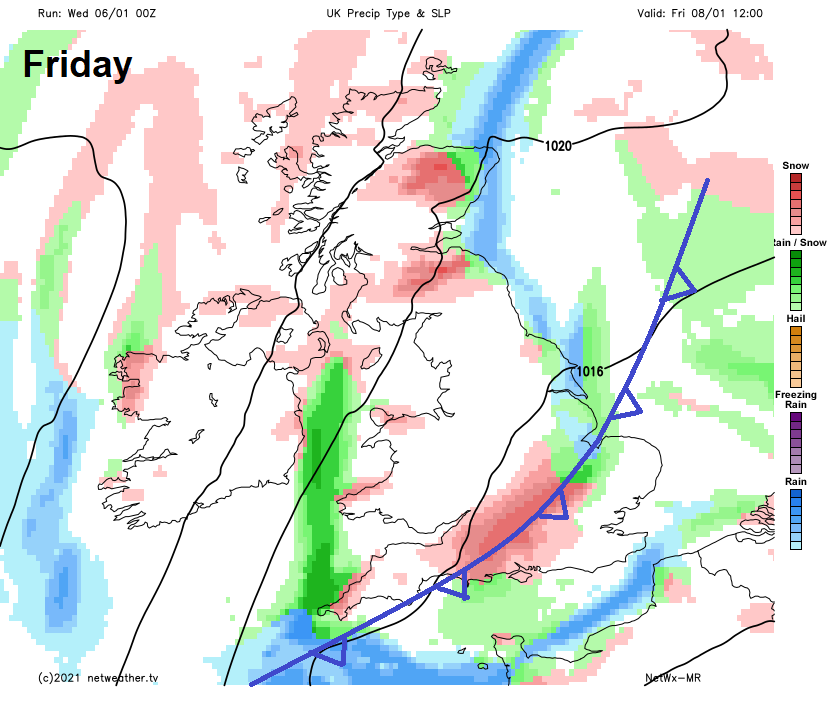 A mostly dry weekend across England and Wales with high pressure in charge, best of the sunshine across southern parts on Saturday, turning cloudier from the north across northern areas. Sunday generally cloudier across Wales and northern and western areas of England, some sunny spells towards eastern areas. Scotland and Northern Ireland breezier and seeing a generally cloudy weekend, with patchy light rain or drizzle, more persisten rain, sleet and hills snow at times across northern Scotland. Still on the chilly side across England and Wales, temperatures reaching 5-7C by day, a risk of frost developing overnight across central and southern areas. Turning less cold across Scotland and N. Ireland with a westerly breeze off the Atlantic, temperatures reaching 6-8C and frost-free on the whole.