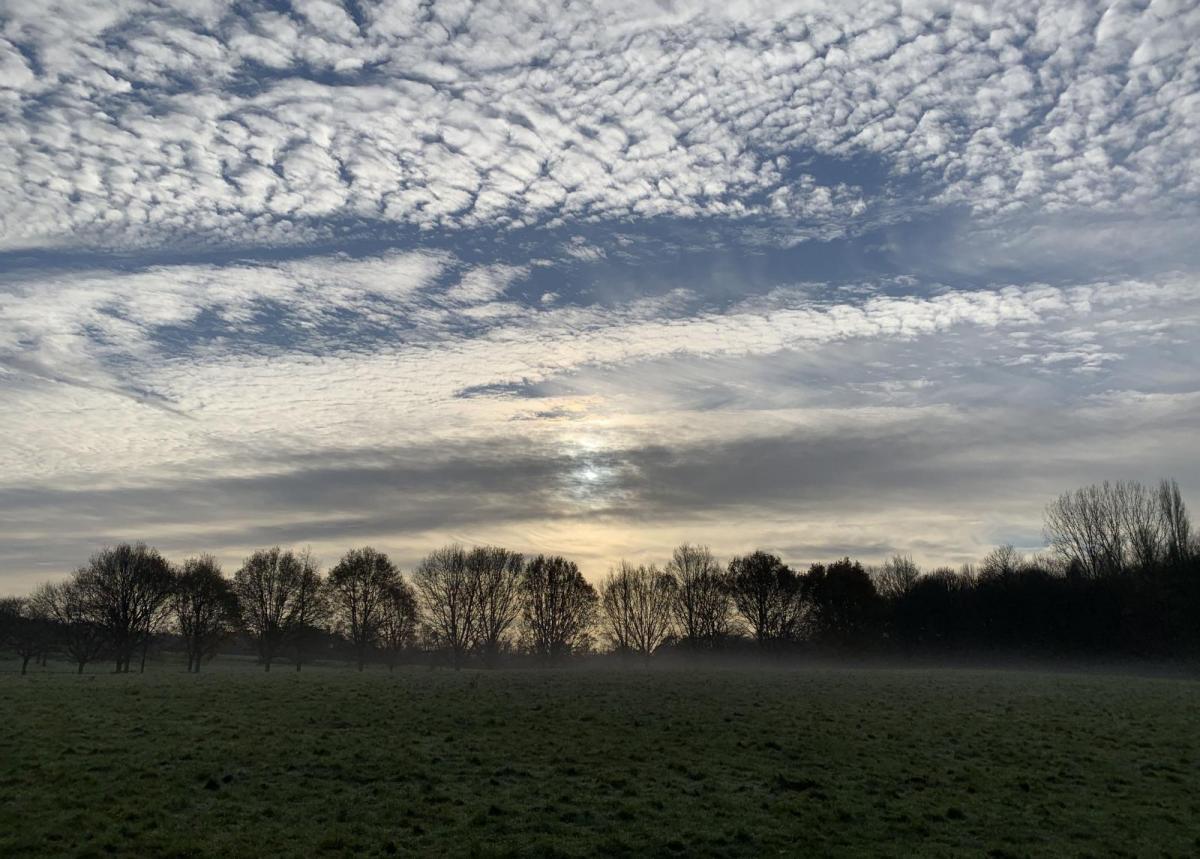 It is mild out there. Tuesday sees many parts of the UK in double figures. However, later this week it will be chilly first thing, with frost and also fog. Quite a change is on the way. Although the far south will feel cooler but may not experience the frosty chill.

It’s all thanks to a frontal boundary which is currently lurking over western Britain and Ireland bringing a wet morning. There are flood alerts for SW Scotland with “a risk of flooding from surface water and small watercourses.” SEPA. Northern Ireland will be wet today and Cumbria into the north Pennines, also Snowdonia. “Local river and surface water flooding is possible but not expected in parts of the north of England from later Monday to early Wednesday. “ Env.Agency 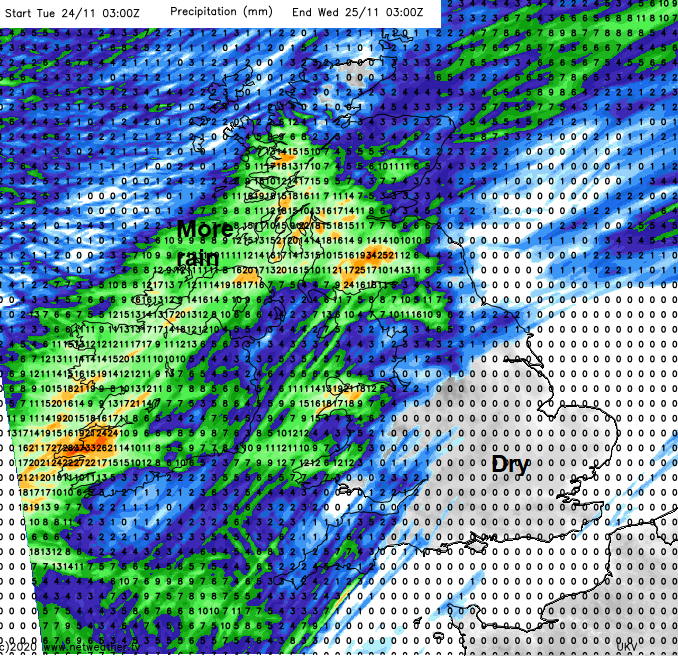 This frontal rain has been feeding in from the west since yesterday adding to already wet and muddy ground. Away from this, there will be a lot of dry weather this week. The boundary between the mild, cloudy, moist air in the south and the colder, clearer air to the north will shift slowly. Through the middle of the week it edges south-eastwards with the rain turning more showery, but still with heavy pulses along the band. Once it reaches southern England, it begins to wave and doesn’t manage to clear Kent before it nudges back over southern England later in the week. 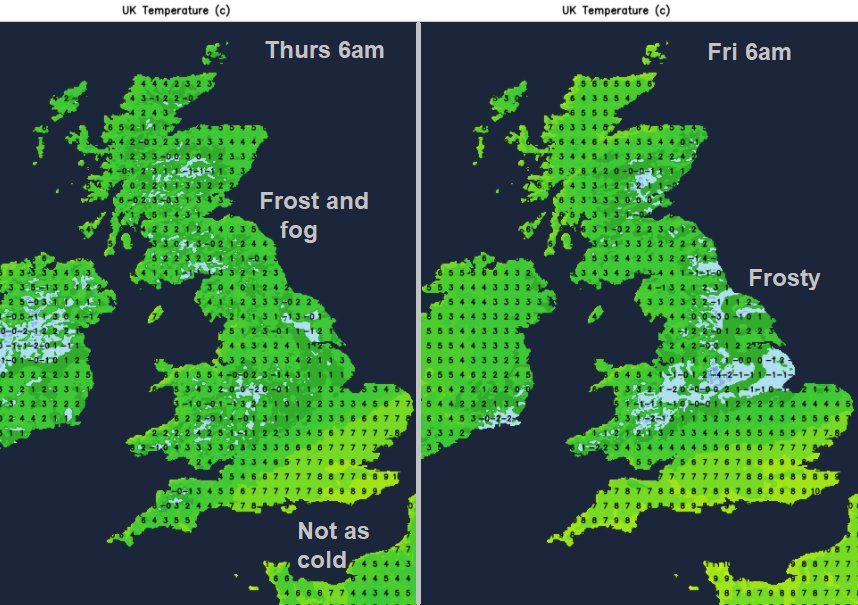 We have this mild, murky and grey weather which bring drizzle and dampness. There is a southerly wind, which will be fresh for Wales, Cornwall, around the Irish Sea and across southern Scotland. To the lee of high ground there will be breaks in the cloud, and temperatures could lift even further with brighter skies. So 11 to 13C in the mild air but only 6 to 8C to the northwest. 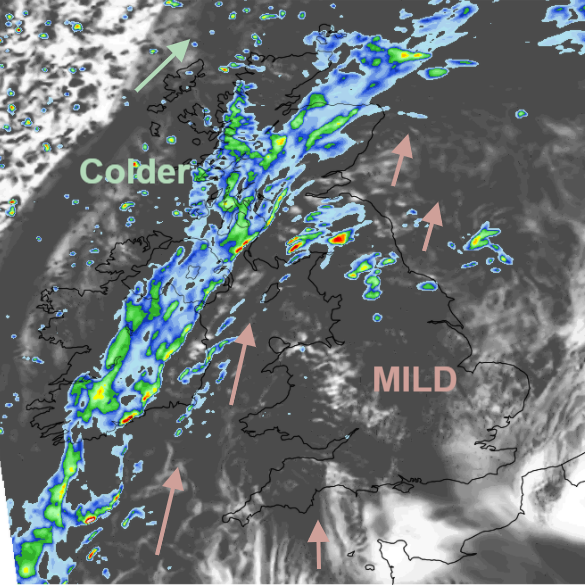 As a low pressure moves closer to northern Scotland tonight, the frontal boundary will stretching from Lothian to Anglesey to the Isle of Scilly so Northern Ireland and Scotland will be in the colder air with light westerly winds. Windier for the Scottish Islands closer to the low. England and Wales will still be in the mild air before midnight with a southerly wind but this will veer dramatically as the front goes through.

By Wednesday morning there will be some heavier rain for SW Britain, the cold air over Wales and NW England and the far NE with a sunny start for Northern Ireland, bright too for much of Scotland with sharp showers in the NW. 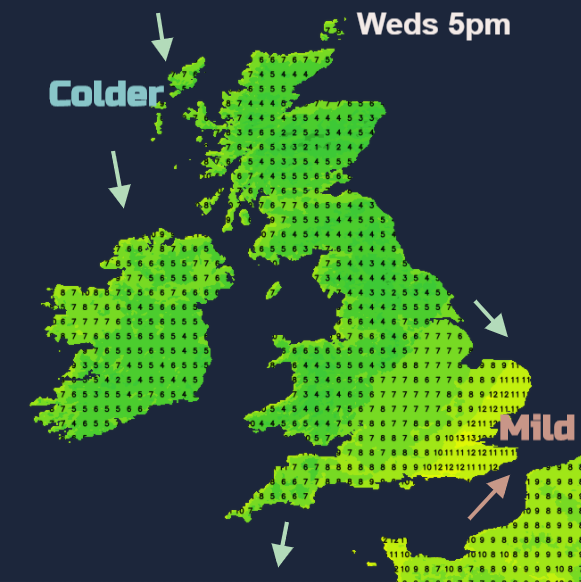 So a change on Wednesday for central and southern England with outbreaks of spilling through the Midlands, up to Lincolnshire and towards the Isle of Wight. More sunshine follows with the cold air but the far SE holds onto the slightly milder air as the rain and cloud band reaches East Anglia, London and SE England later in the day. There is some uncertainty about southern counties not getting into the colder air

By early Thursday there will be dense fog in places which could persist for hours and the same on Friday with more fog forecast. There will be a frost too and then cold settled days into the weekend.