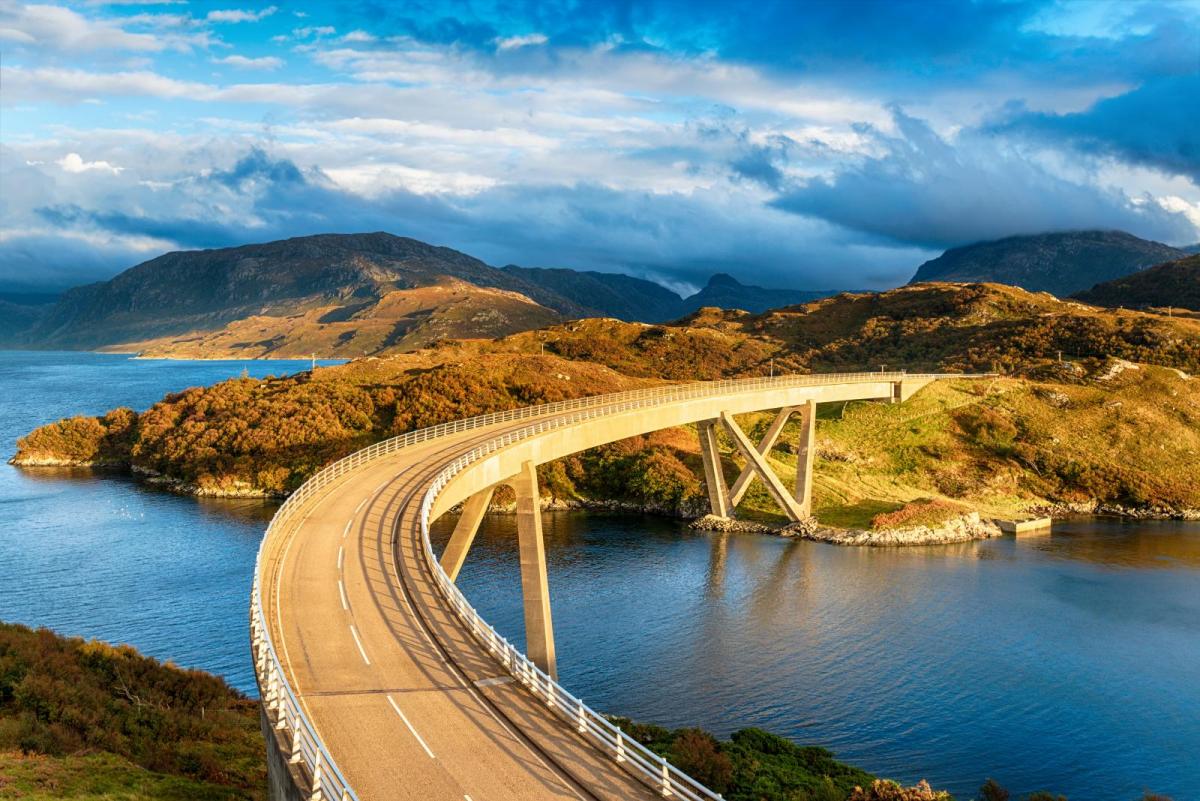 Weather for the week ahead: A foot in both camps

Sometimes writing these forecasts can be a challenge, especially when the weather is stuck doing the same old thing for quite some time. It's a bit like that at the moment, and today the struggle is finding new, more interesting ways to describe changeable, mixed weather - which is exactly what we're going to be seeing throughout the upcoming week.

The weather over the next 7 days isn't going to be crazy unsettled, neither is it going to be fine and dry throughout. Instead, it's going to have a foot in both camps, serving up some wetter and windier spells, but also some drier, brighter days. Temperatures will be up and down too; we're into a cooler airmass at the moment, we'll have a fresh end to the weekend with some patches of frost to greet us on Monday morning. But, milder air will be back again on Monday, before that's replaced by cooler air again from later Tuesday and into midweek.

Today (Sunday), much of the country will see sunny spells, but there'll be a fair few blustery showers blown into the north and west of the UK. Some of these will make it further south and east, but for much of central and eastern England, it'll be a dry day. The far south of the country isn't likely to see as much of the sunshine as elsewhere, as the weather front which moved south during yesterday is still closeby. It'll even bring some patchy, drizzly rain at times, particularly during the first half of the day but should move far enough away into the afternoon to see those ease and allow some breaks in the cloud too.

This evening and into the night, a few showers will continue in western regions, but elsewhere it'll be dry with clear spells. That'll allow temperatures to drop close to, if not a little below freezing so there'll be some frost around by dawn. 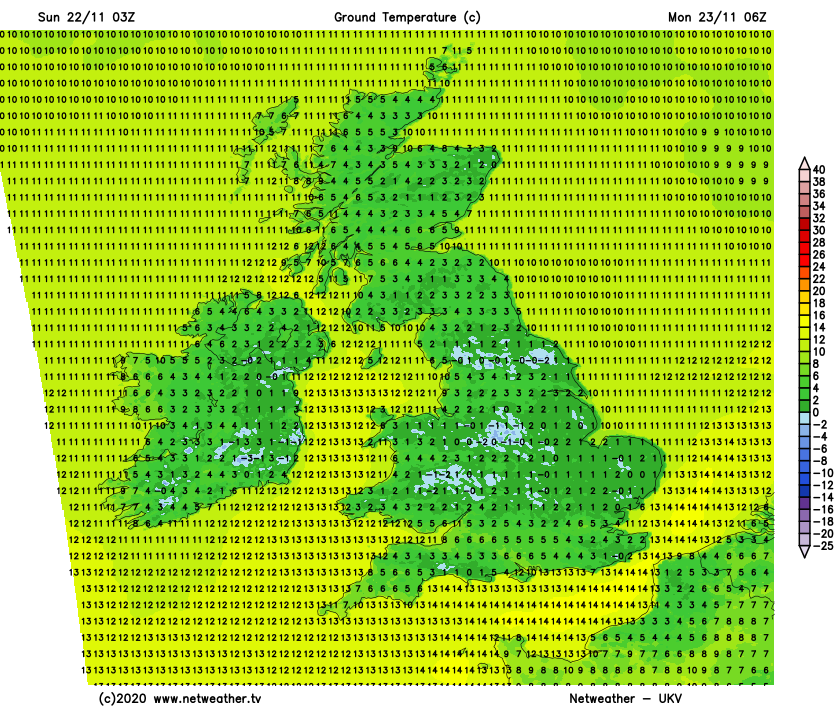 Monday then brings a pretty familiar northwest to southeast split. High pressure near to the southeastern part of the country will keep the weather more settled the further south and east you are, but low pressure will be closing in on the northwest, bringing outbreaks of rain and strengthening winds with it. The southwesterly wind will also ease milder air up over the country again, so after a chilly start, most parts will reach 8-12c.

The rain isn't going to move very far, very fast during the start of the week. So, it'll be another wet 24-48 hours in the north and west of Scotland and also the west and northwest of the island of Ireland. Elsewhere, barring a few showers, it stays generally dry on Monday, and into the first half of Tuesday. The rainfall totals for Monday are shown below. 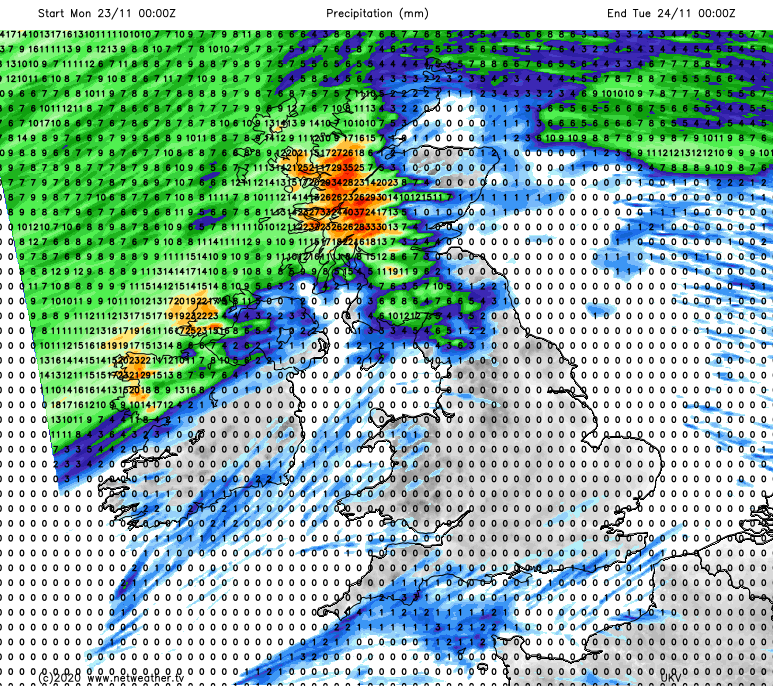 Into the start of Tuesday, nothing much will have changed - that band of rain will hang around without moving much at all, continuing to drench the same areas. The rain along it will ease at times but then pulse back to life, with occasional waves along the front moving it slightly north or south from time to time. Into Tuesday afternoon it does look like things will start to move as the rain slowly nudges further southeast.

Colder air will start to tuck in behind the front bringing the wet weather as it starts to make its move, which means some snow is possible up over the high ground of Scotland before it clears. It'll then be a slow trundle further southeast overnight Tuesday and during Wednesday, and by the time it reaches southeast England later on Wednesday it's likely to virtually grind to a halt - thanks to high pressure over the continent blocking its progress. The rain along it will become more patchy as it moves out of Scotland and across England and Wales, but even so, some heavier bursts are still possible at times.

Behind it, temperatures will fall again, with sunny spells but also some showers which will mostly be in the north and west. With clearer skies and a colder airmass overhead, there'll also the threat of some overnight frost and fog into Thursday morning - away from the still milder, and cloudier southeast corner that is. 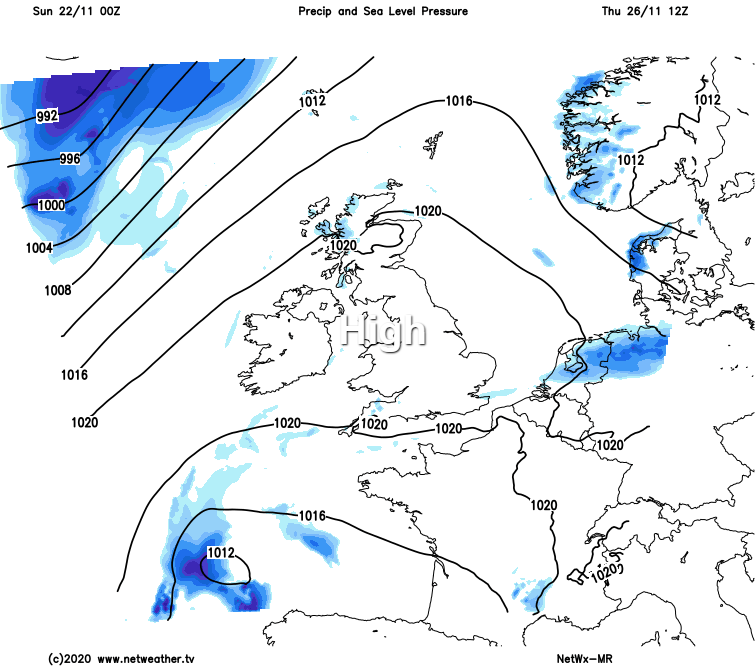 Thanks to a ridge of high pressure easing up across much of the country, Thursday is likely to keep the fine, settled but cool theme going after a distinctly nippy start. Although we'll have to keep an eye on that (by now weak) front in the south and southeast as it's not likely to be far away and may even start to head back north again, spreading cloud, maybe some patchy, drizzly rain and milder temperatures with it.

Into the latter part of the week and next weekend, the process is set to repeat. So, the high pressure which temporarily moved up over the British Isles is set to get squeezed away to the southeast again, as low pressure moves nearby to the northwest. That'll mean the north and west of the UK see a return to less settled, wetter and windier weather soonest, with those further southeast staying drier and more settled for longest. Eventually though, the unsettled weather is likely to make its move southeast again. It'll be like being on a weather merry-go-round!