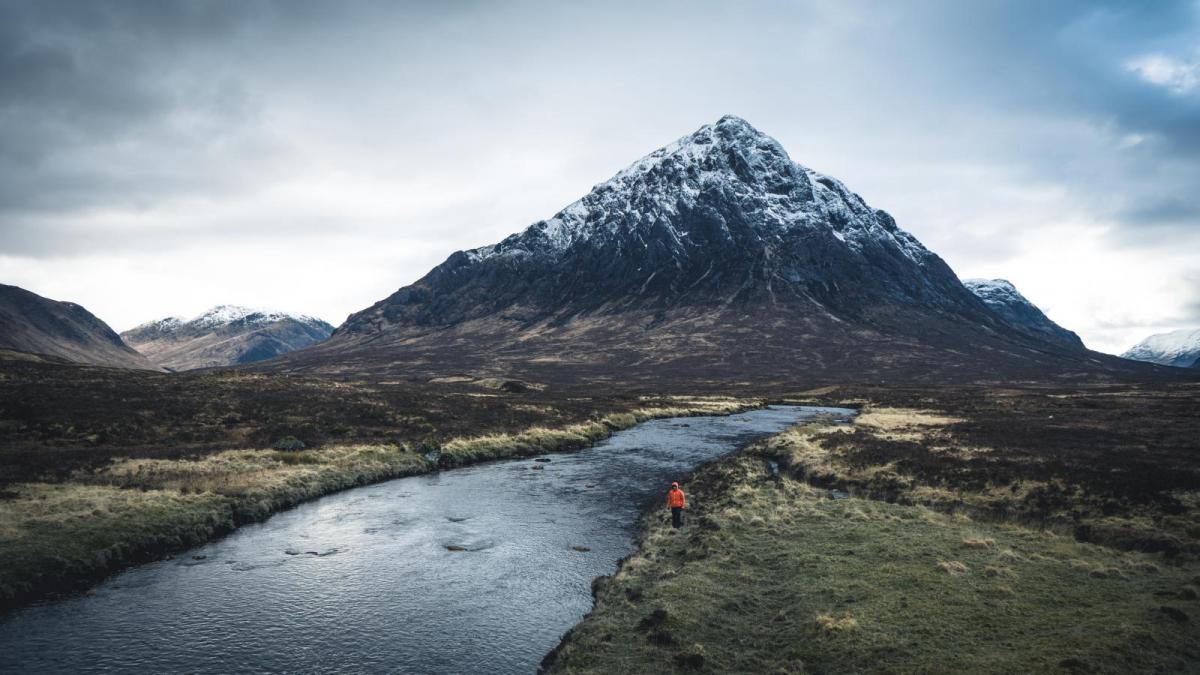 Only a brief, wild, Northerly blast but flooding concerns as it coincides with high tides

Severe gales, flood warnings, snow showers and the Thames Barrier could be called into action as the winds swing around to the North during Wednesday night.
This week has been very mild so far with temperatures up to 16C. Thursday morning will be quite different as strong northerly winds take hold during Wednesday night.

As a low pressure pulls away eastwards, the northerly flow opens up and Arctic Maritime air reaches south. Most of the UK will be in single figures for Thursday, a few 10Cs in the south. That is around average, further north the average is nearer 7C. 5 or 6C could be the maximum air temperatures for Scotland even NE England, add on the wind and that is quite a chill. However, there will be plenty of sunshine about. 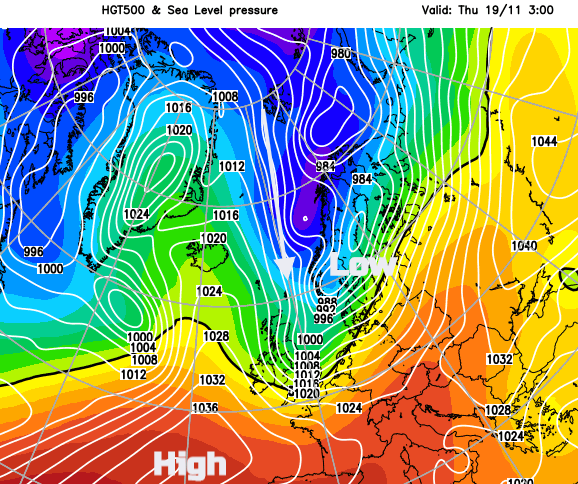 If you are looking for snow, this will be a brief cold spell with snow only forecast to fall in the far north of Scotland. A few cms for the Scottish mountain tops, wintry bits possible for Cumbrian Fells and north Pennines overnight and early Thursday down to lower levels for northern mainland Scotland and Northern Isles. Northern Ireland could see wintry showers with either sleet or hail early on, Welsh mountains and North York moors the odd flurry but that’s about it. The showers and winds ease during the day as pressure builds. 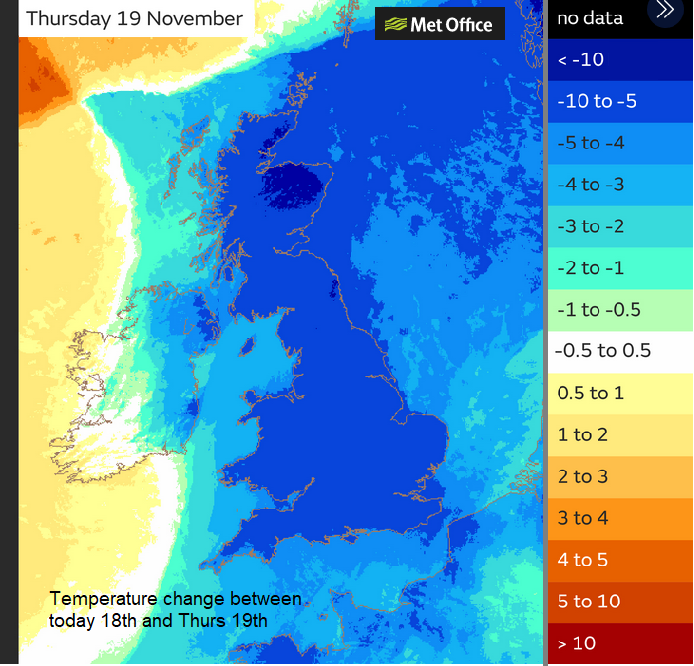 This short-lived northerly blast will be lively, although most of the action will be during Wednesday night. It could wake you as the strongest winds go by.

The northerly gales start on Wednesday evening for the Scottish Islands, with a screaming northerly taking hold for northern Scotland and along the west coast, backed through the North Channel into the Irish Sea. Wild conditions around midnight for the Inner Hebrides, the Antrim coast and the Isle of Man. A straight northerly for eastern Scotland and NE England as NW winds (even backed to westerly for a time) hit Merseyside, Lancashire then, in the northerly flow, north Wales. 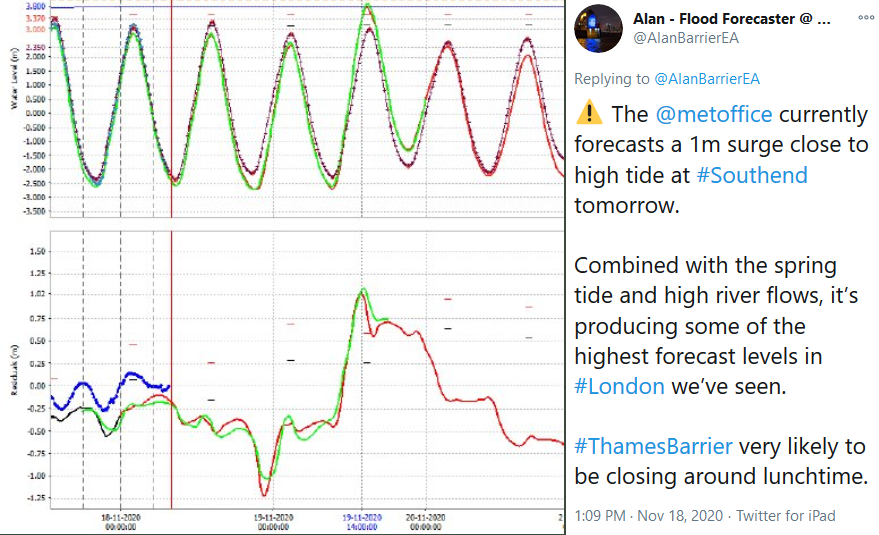 By daybreak, the winds will be easing off for Northern Ireland and western Scotland, but it will be a cold morning, noticeably cold than the first half of this week. By Thursday morning this push right down through the North Sea will be having impacts on the amount of water heading up the Thames estuary.

More about the decision to close the Thames Barrier in such situations.

Met Eireann has issued several yellow warnings for wind tonight over Ireland. “The combination of strong winds coupled with high tides brings an increased risk of coastal flooding.” And wind warnings from the UK Met Office around coastal Scotland, Orkney and Northern Ireland. "Strong winds are expected overnight which may lead to some disruption." These coinciding with high tides are adding to concerns.

The Environment Agency mentions coastal/tidal flooding on Thursday for parts of the east coast of England tomorrow and for NW England tomorrow. Also, for coasts of Scotland, there is a risk of minor coastal flooding impacts in exposed locations on Thursday, due to high tides and large waves. Surfers along the east coast of Britain and far north of Scotland will be watching with interest, waiting for the north wind to subside. 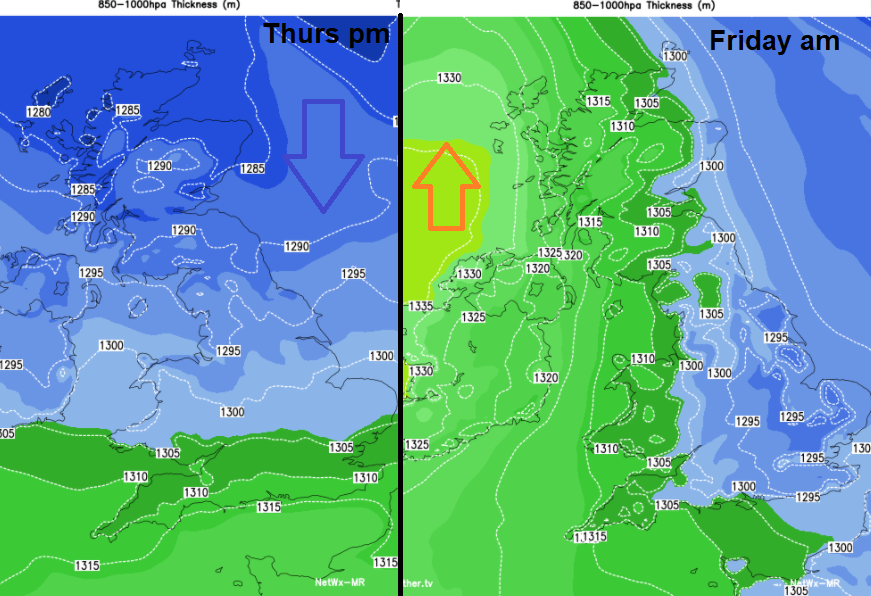 This week’s brief northerly blast will have eased by Thursday evening but the colder air lingers long enough to give a frosty start for eastern Britain on Friday.