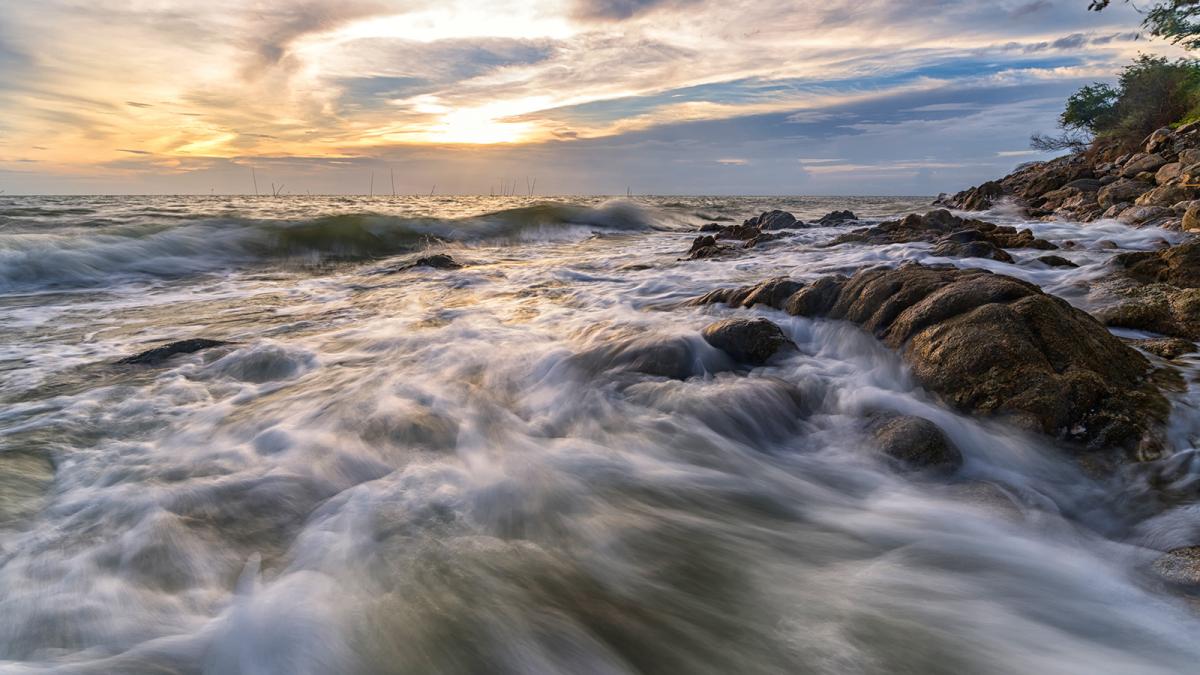 Very mild and blustery before a cold, northerly plunge

It is very mild today. The November averages are 7 to 10C north to south through the UK but Tuesday as started around 13C and many parts will reach 14 or 15C with 16 even 17C possible. It is also blustery, windy in the north with a lot of cloud about and with a frontal boundary lurking to the northwest there will be persistent rain for western and NW Scotland today into Wednesday. When that frontal boundary sweeps eastwards tomorrow, the UK will then be in the colder air currently to the north. Quite a change. 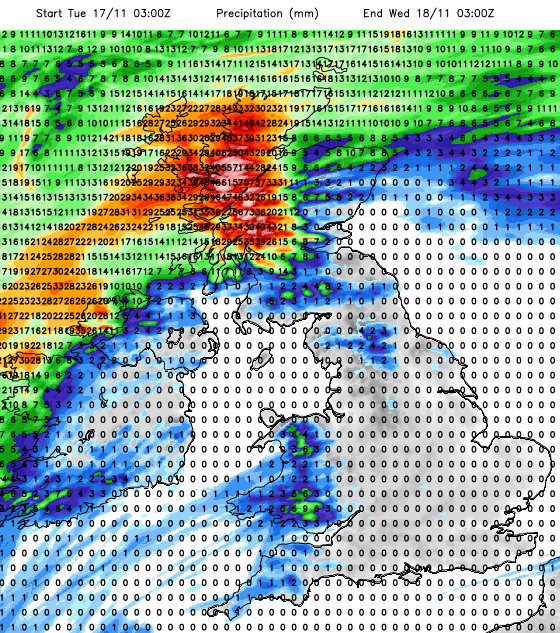 Northern Ireland and western Britain will also keep more cloud and see patchy rain but for the rest of Britain, it will be a dry day with a few breaks appearing as the brisk SW winds keep going. To the lee of high ground, there will be gusty winds, interesting cloudscapes and high temperatures possible due to the Foehn Effect.

Mild, moist air is forced upwards by high ground, it rains and so drier, warmer air flows off the lee side of hills and mountains. This air is already very mild coming right up through western Europe with links back to what was Tropical Storm Theta which nearer Madeira at the weekend. The windiness takes away from the warmth but where the cloud does break it will feel most unusual for the time of year. Don’t get too carried away as there is frost and even northern snow showers in the forecast later in the week.

The Met Office has a yellow warning for the rain with flooding concerns as this rain just keeps on coming. The frontal band waves about a bit today, the main rain edging northwards later through the NW Highlands. Wales will also see rain today as this moist, mild flow just keeps feeding in. By tonight the winds will be strong for Northern Ireland and western Britain with coastal gales.

The fronts start to move eastwards, over Northern Ireland early Wednesday morning, with a spell of heavy rain, gusty winds as the winds veer to the west. It then becomes brighter with sunshine. 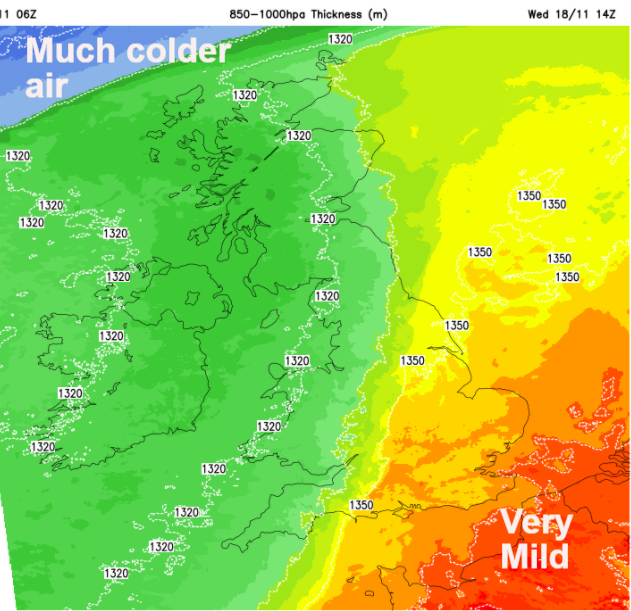 Heavy showers move from the SW across England and then the frontal rain sweeping in from the west. Ahead of this, mild air remains around 13 or 14C. The rain won’t be as heavy by the time it reaches SE Britain in the afternoon. Much brighter, cooler air follows with sharp showers for Northern Ireland and western Scotland, adding to the already very wet ground.

As the true colder air moves down from the Arctic there will be a vicious northerly wind during Wednesday night over northern and western Scotland, down into Northern Ireland and gales through the Irish Sea. There will be heavy, thundery showers with hail and then sleet and hill snow. The strong north winds then extend down eastern Scotland as overnight temperatures plummet inland. 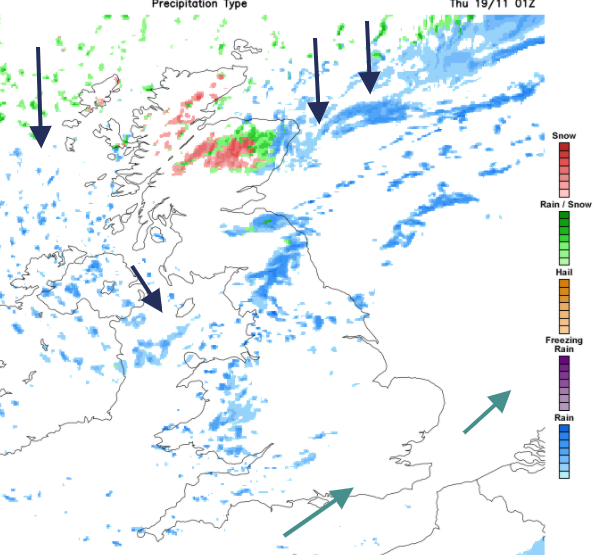 By Thursday morning it will feel colder everywhere. There will have been snow overnight for the Scottish mountains in the north and snow showers continue to feed in as the north winds ease down during Thursday. Showers will clip Wales and eastern England, some with an iciness to them. The day will be bright and sunny but cold.

Temperatures fall away over central and eastern Britain during Thursday night with light winds and the risk of frost and ice, but the next incoming Atlantic front will bring more cloud, rain from the west and a return to milder conditions. 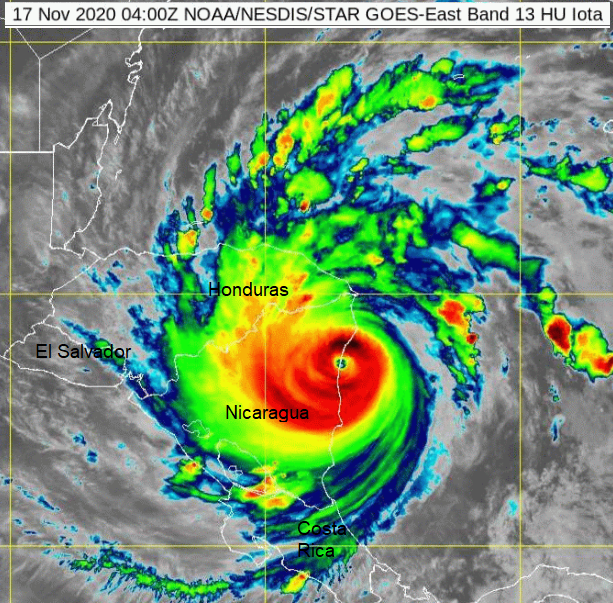 Hurricane Iota (which reached Cat. 5 status) has made landfall over Nicaragua. This is a catastrophic situation. "Extreme storm surge of 15-20 ft forecast, destructive winds, potentially 30" of rainfall." NHC  Iota is making landfall in almost the exact same location that Cat. 4 Hurricane Eta did a little less than two weeks ago. The landfall distance is around 25km, comparable to the City of London out to the M25. Two major destructive hurricanes in that distance this month. 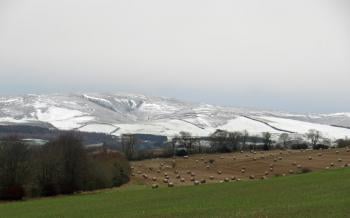