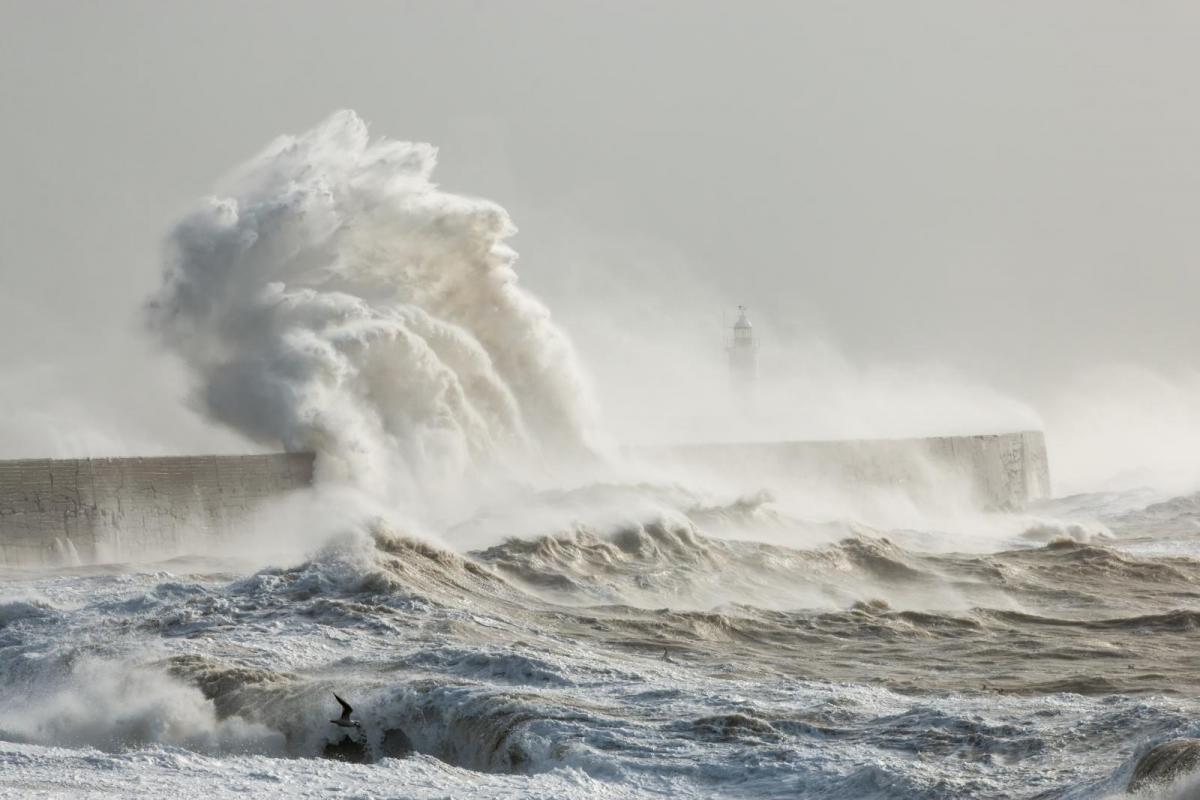 Although very mild this weekend, a conveyor belt of quickly moving Atlantic systems will make it a very unsettled and often wet, windy affair. There are already several flood warnings in force, with severe gales likely mostly over Scotland, Northern Ireland and in the West likely to cause travel disruption.

It's a very wet start over much of Scotland and Northern Ireland, with some heavy rain. The rain will soon move away from Northern Ireland to leave blustery showers that'll fade towards evening, with the rain clearing Scotland from the West later. Over England and Wales after a dry start in some central and eastern areas, bands of rain locally heavy and squally in places cross the country from West to East, followed later by sunny intervals and scattered blustery showers in the West.

A vigorous depression moving North to the West of Scotland has been named storm Aiden by the Irish Met Office. This'll give a severe southerly gale this morning in the Irish Sea and across many western areas, with gusts of wind up to 70 to 75mph for a time. Northern Ireland may also see gusts in excess of 60mph briefly as the storm clears to the North. Elsewhere gusts of 40 to 50mph seem likely before the wind' veers' South West or Westerly later. 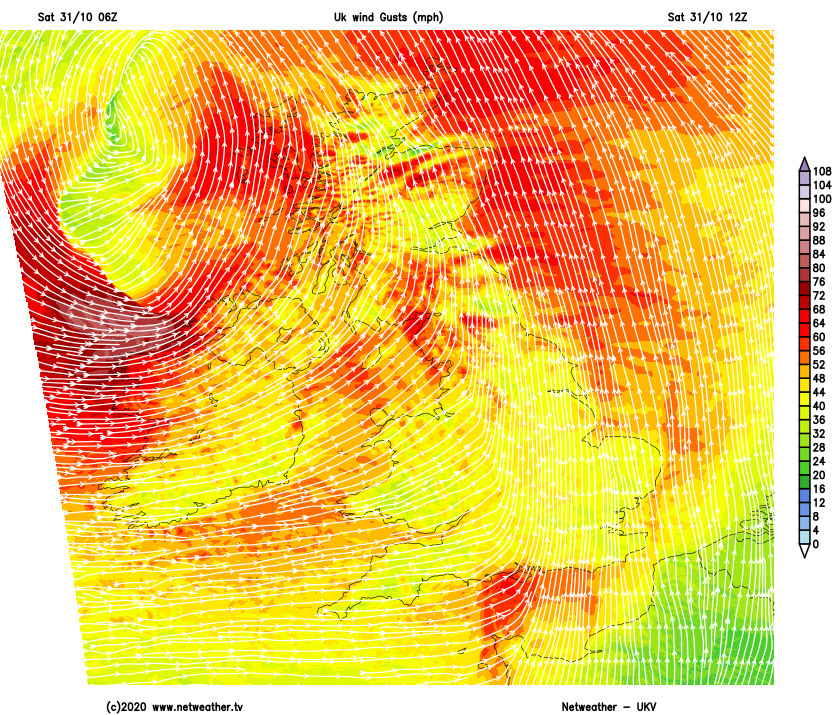 It'll be very mild though despite the conditions, with temperatures reaching 11 to 14C across Scotland and Northern Ireland and an unusually mild 15 or 16C locally perhaps 17C over parts of eastern England.

After dark, any residual rain soon clears from the North East leaving broken skies, in a somewhat lighter but still quite blustery South to South West wind that'll continue to bring scattered showers. Then after somewhat of a brief lull another Atlantic system 'sweeps' in overnight, bringing more outbreaks of rain to probably all but Scotland by dawn. The rain will be heavy in places with renewed gales in the North and West, but in a mild night, temperatures generally shouldn't fall below 8 to 11C. 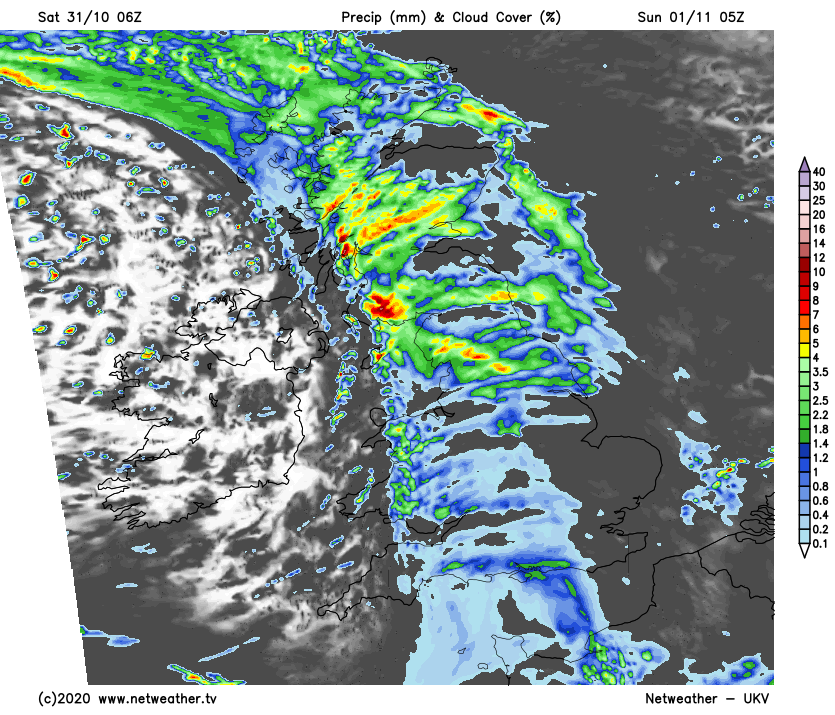 In a rapidly changing weather situation, Sunday begins wet, especially over Scotland and in the North and East, but sunny intervals and blustery scattered showers will soon replace this. In southern and some central parts however it may remain cloudy but as one system is quickly replaced by another, more rain will be moving up from the South before the day is out. 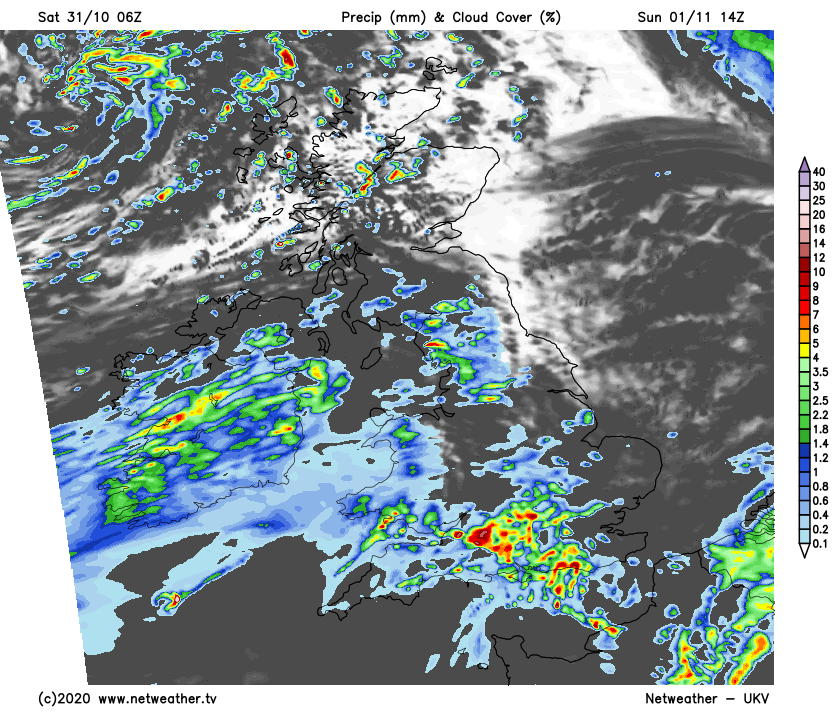 Although still quite fresh with gales in the North and West, a South to South West wind shouldn't be as boisterous. It'll remain very mild though into the new month with top temperatures in the range 10 to 15C.

Most parts see more rain heavy in places after dark, although the North and West of Scotland may see a mix of clear intervals and scattered showers in lighter breezes. But elsewhere winds freshen again from the South, with renewed gales especially over English Channel shorelines. By morning though, the weather should be clearing again from the West. It'll be another very mild night over much of England where temperatures shouldn't fall below 8 to 12C, with 5 to 8C more likely elsewhere.

After the stormy start to November, we see the other face of autumn by mid-week, when it becomes drier and quieter. It'll be colder though, and there'll be a touch of frost in some rural areas at night, with some mist and patchy fog also forming that could linger on some mornings.