It's been another wet 24 hours for both the northern and southern thirds of the UK. Northeastern Scotland, in particular, has had an absolute soaking overnight with 25-50mm falling in places. It will be a drying out day today though, with much of the country dry or at least becoming dry, but it's just a transient breather as the next spell of wind and rain moves in from the west later. 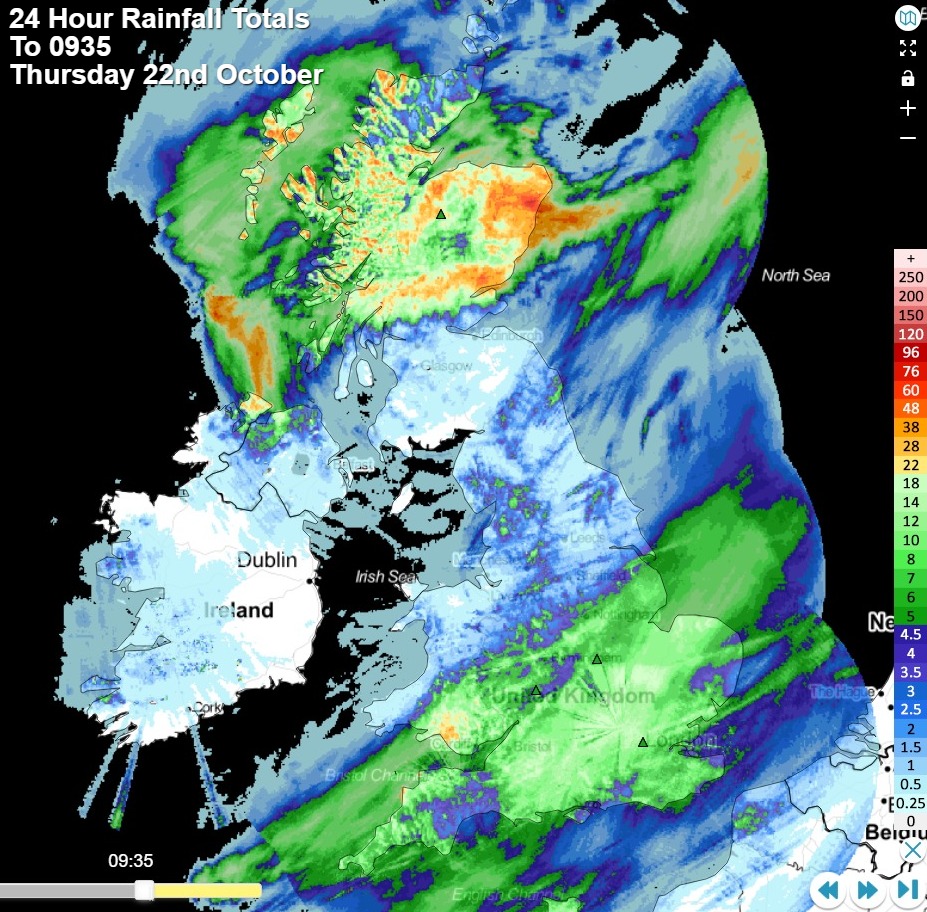 The respite today is thanks to a weak and brief ridge of high pressure moving overhead, but even so, there is still some rain about to start the day. The overnight stuff in the east of Scotland is still clinging to the coast and may take a little while to clear. There are some showers in southern parts and the same through some western regions. A lot of that should ease away during the morning, to leave much of the country dry with sunny spells this afternoon though. Temperature-wise, it's still quite mild in the south and southeast corner in particular with highs likely to reach 15-17c this afternoon. Elsewhere it's a bit cooler and fresher with maxes of 9-13c generally.

Although parts of the UK and Ireland have had a very wet few days with strong winds at times, that's nothing compared to the drama in Rhodes yesterday where several waterspouts formed just near to the coast. Thestixx, who is a member of the netweather community, uploaded this video of them.

You can see more photos and video from Rhodes here.

Back home, and rain will start to work its way in from the west this evening and overnight, accompanied by blustery south to southwesterly winds. It won't be a particularly prolonged spell of wet weather and will tend to become more shower the further east it gets, giving most of its heavier, more persistent bursts to western parts.

By Friday morning it'll be running down the western side of England, through Wales and across into central and eastern Scotland. It'll then carry on east during the day, to clear the southeast corner last during the evening. Some in the southeast may not see much if any rain at all out of it, but it may well pep up along the south coast and into the far southeast corner with some heavy, even thundery bursts developing. As the rain clears through on Friday, there'll be clearer skies with sunny spells and a scattering of showers following on behind, these most frequent in the north and west of the country.

Overnight Friday and during Saturday, another front moves in from the Atlantic, with low pressure in towards the west of Scotland. That's going to mean another spell of rain will move through, this one a bit more spritely and long-lived than Thursday's. It'll also be joined by some squally, gusty winds, with gales, perhaps even severe gales in places as it journies west to east.

Beyond that, with low pressure near to the northwest of Scotland during the remainder of the weekend, there'll be ongoing blustery winds with sunny spells and heavy showers blowing through - these again more frequent in the north and west.