Showery end to the week, the weekend promises drier weather, but remaining cool

Yesterday marked a turning point in our weather from summer-like sunshine and warmth over the past few weeks to something a lot more autumnal setting in for the rest of this week. Low pressure will drift east across southern Britain today, bringing showers or longer spells of rain over England and Wales, windy across the south. As the low clears east, a strong northerly wind develops on Friday, rain and gales affecting eastern England. But a more settled respite in time for the weekend, as high pressure builds in, with most places dry and sunny but on the cool side. But as we head through next week, the jet stream looks to crank up a few gears, bringing a return of unsettled and windy conditions.

For now, a nippy start for many, with clearing skies overnight in the polar maritime flow allowing temperatures to drop into single figures widely, low single figures across the north, with a frost to start in a few places, in fact Altnaharra in the Highlands fell to -5.0C, making it the coldest September night since 1997. 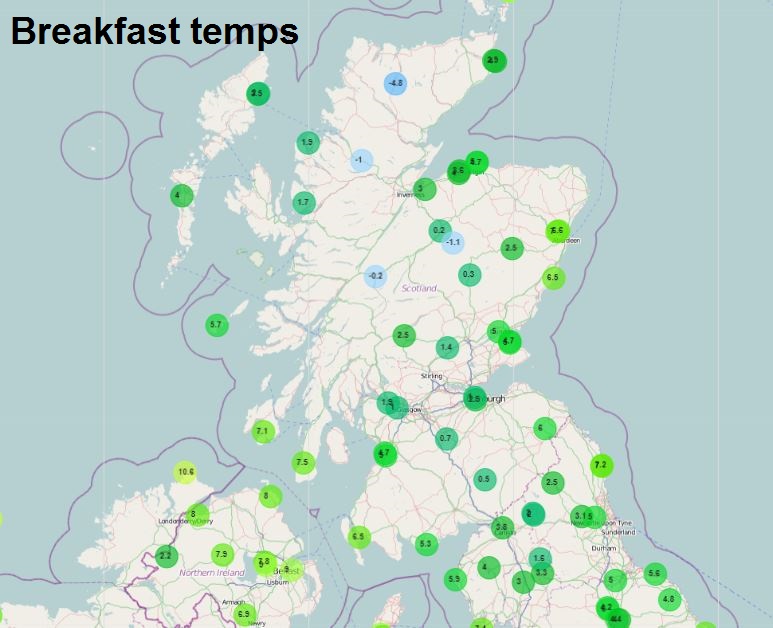 Scotland will enjoy a mostly dry and sunny day after the chilly start, though there will be some coastal showers – especially towards the east. Further south, a band of more persistent rain clearing northeast over SE England and East Anglia at breakfast time, then sunny spells and scattered showers following and spreading northeast across Wales and southern England for the rest of the day, while a band of showery rain edges slowly north across northern England and N. Ireland during the morning and lingering here into the afternoon. Some of the heavier showers south of northern England accompanied by the odd rumble of thunder.

Windy across southern Britain, with gales developing across SW England this afternoon. A rather cool day, temperatures reaching 11-14C generally, maybe only 9-10C across the far north of England stuck under cloud and rain. 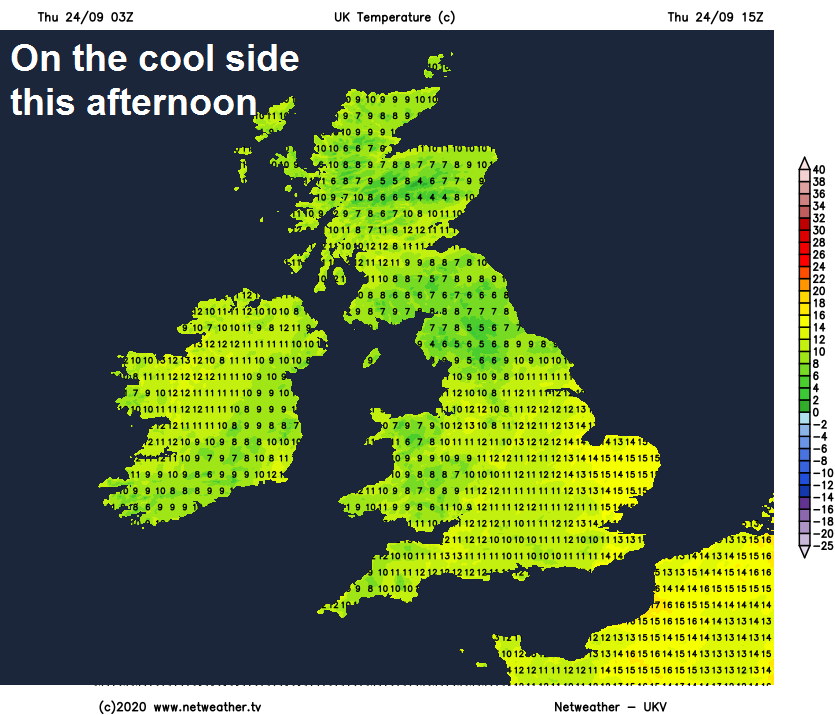 Showers continuing this evening and overnight across England and Wales, most frequent across coastal counties, but some getting inland too across central and northern England. Clear spells between the showers, making it turn chilly. Windy across the south, with gales for SW England for a time. Scotland and N. Ireland mostly dry inland and turning cold under clear skies, with a touch of frost likely to develop, but coastal showers likely too.

Winds turning northerly on Friday, as low pressure moves away across the North Sea and Low Countries. The wind strong and gusty, with gales possible near North Sea coasts, making for a chilly day for all. The wind will blow south showers too, particularly across eastern England, Wales, SW England. Showers heaviest and most frequent across eastern England by the afternoon, where they may merge into longer spells of rain. Fewer showers elsewhere, with sunny spells. Temperatures reaching 10-14C at best generally, maybe 15C in the southwest. 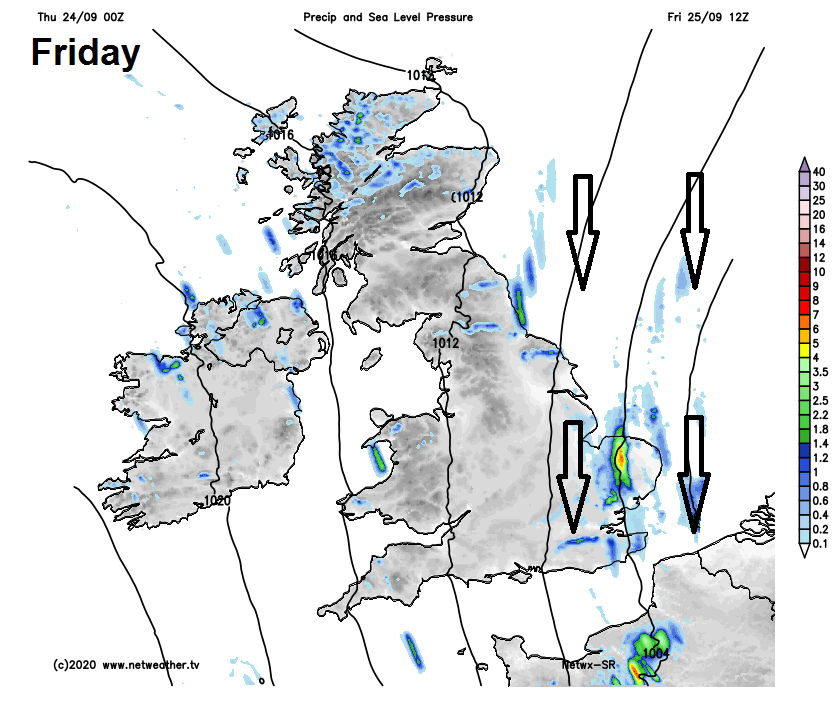 Remaining on the cool side over the weekend, with temperatures reaching 11-14C at best generally. But with a ridge of high pressure building in from the west, it’s looking to be largely dry with sunshine for many and lighter winds. The exception will be some showers for a time across the far SW of England and also eastern counties of England on Saturday, where a strong northerly wind will continue blowing in further showers, these easing on Sunday, but perhaps remaining windy and cloudy here on Sunday. Cold early Saturday and Sunday mornings, with temperatures in low single figures widely, a frost developing in rural northern and western areas. 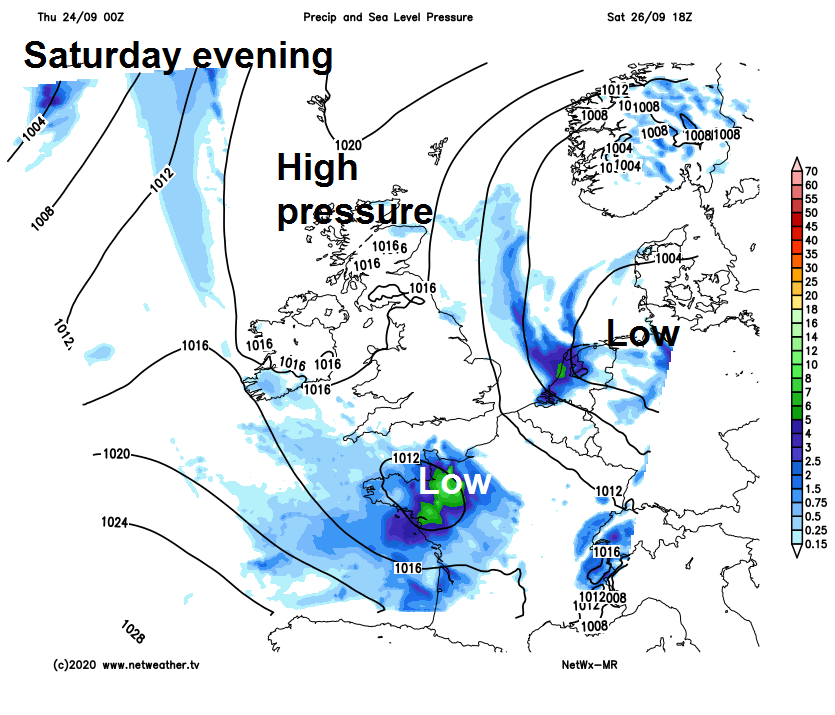 An occluded frontal system looks to bring cloud and a band of showery rain eastwards across all parts on Monday, perhaps not reaching SE England and East Anglia until late afternoon. Drier and brighter conditions following across northern and western areas in the afternoon, but with showers across the northwest. Another brief ridge of high pressure moving in for Tuesday looks to keep most dry and bright or sunny, though some showers possible for western coasts and hills.

Turning increasingly unsettled from mid-week, as the jet stream cranks up and brings in a succession of Atlantic systems, one frontal system looks to bring rain east for most on Wednesday, followed brighter but showery conditions. Then later in the week on Thursday and perhaps into Friday, a deepening low pressure system could bring wet and windy conditions across all parts, with gales in places.