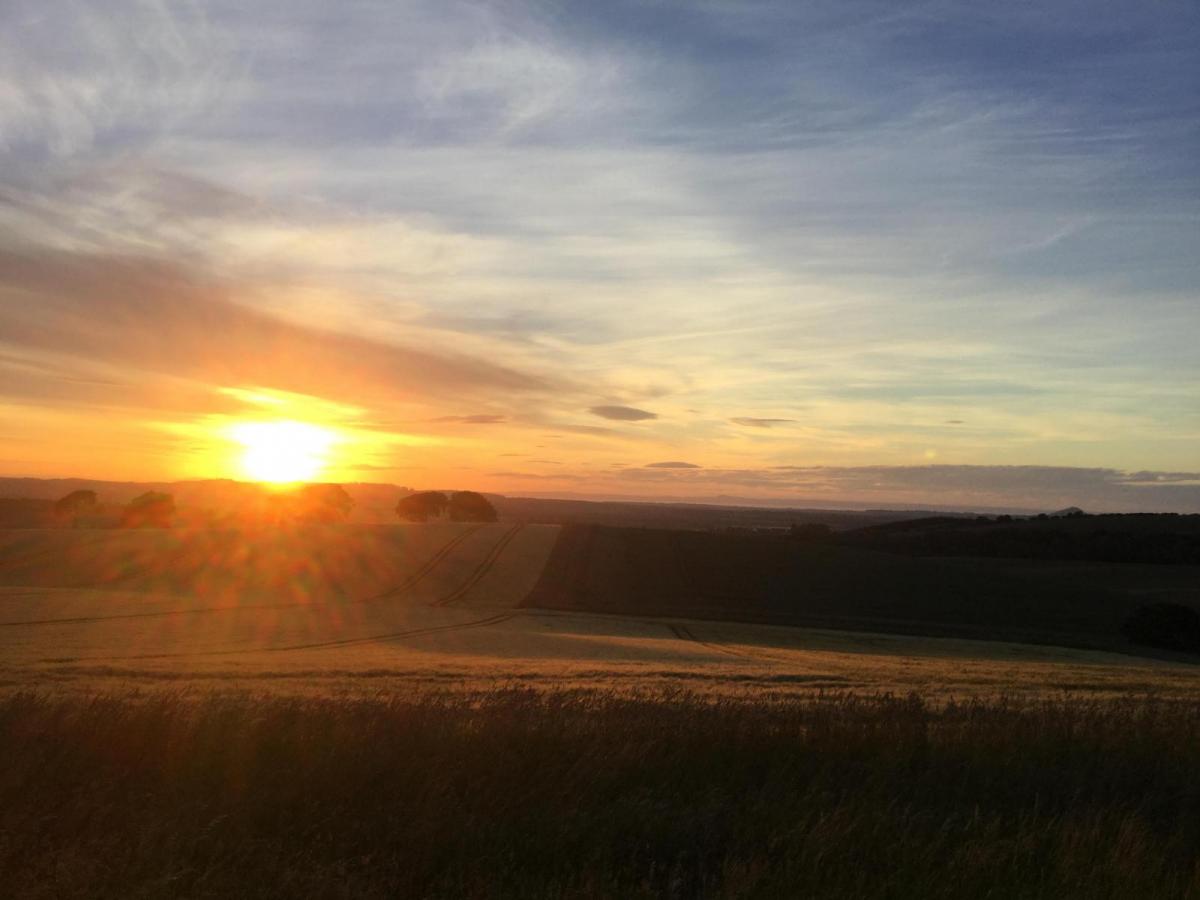 The cold front across the UK is doing its job. To the south temperatures are still in the mid-teens, with more cloud and showery outbreaks of rain. To the north, it is cool and clear with sunshine but a distinct nip in the air. More of that to come. And along the frontal band, some heavy bursts of rain this morning. 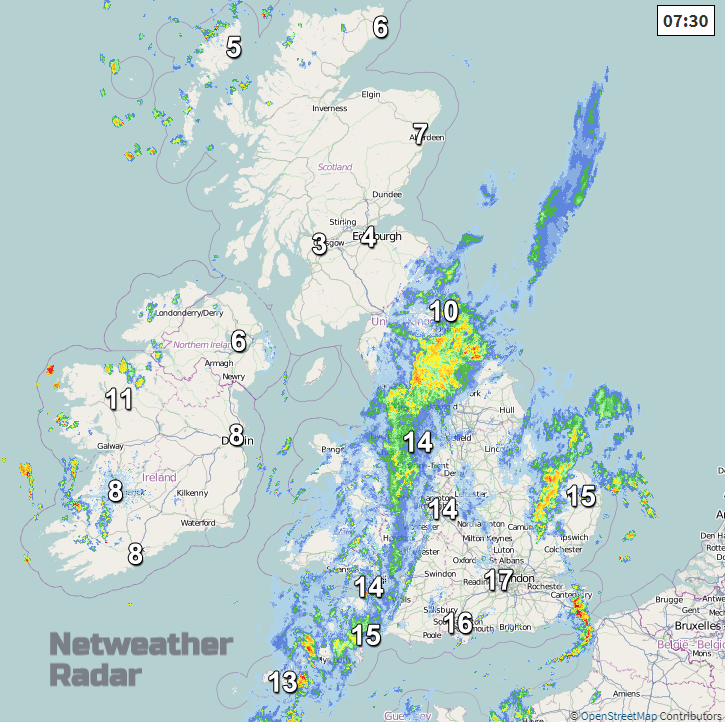 The rain is trying to clear away eastwards today but leaves strangling showers. By Thursday an Atlantic low will be throwing further bands of showers over the UK with strengthening winds and gales for Ireland and SW Britain. Then colder air from the north to end the working week. This brings the risk of frost, even wintriness in showers over the highest northern peaks. 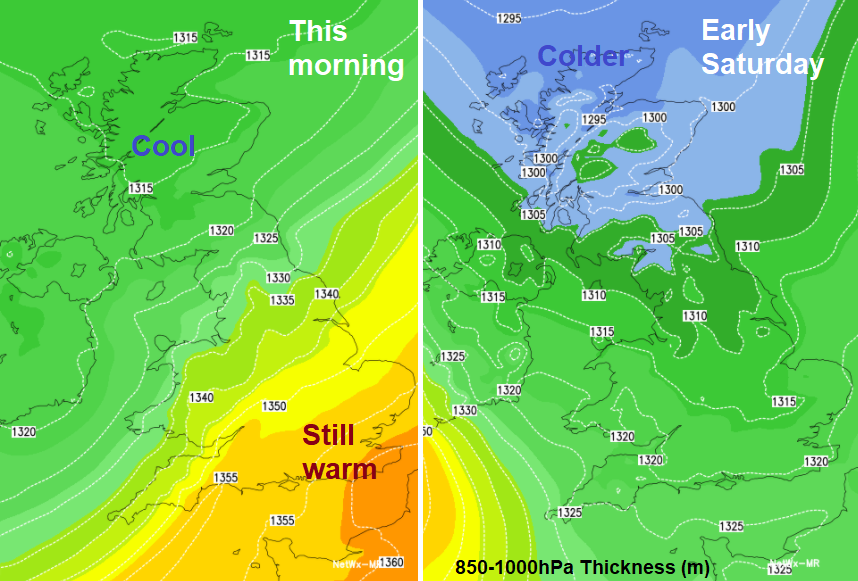 South-eastern Britain starts Wednesday with light SW winds, a fair amount of cloud and the outbreaks of rain. For Kent and the Essex coast the winds will pick up as showery clusters move through bringing quite a change in the weather. The frontal rain moves eastwards away from Wales but with wet, grey conditions continuing for the Midlands and Yorkshire and Teeside. The winds then back to a northerly behind the front and it will feel cooler. Scotland and Northern Ireland will have a cool start but with brightness, even sunshine and just a few showers about. Northern Ireland sees more showers breaking out with a few sharp downpours and just a scattering over northern Britain. The winds remain light. 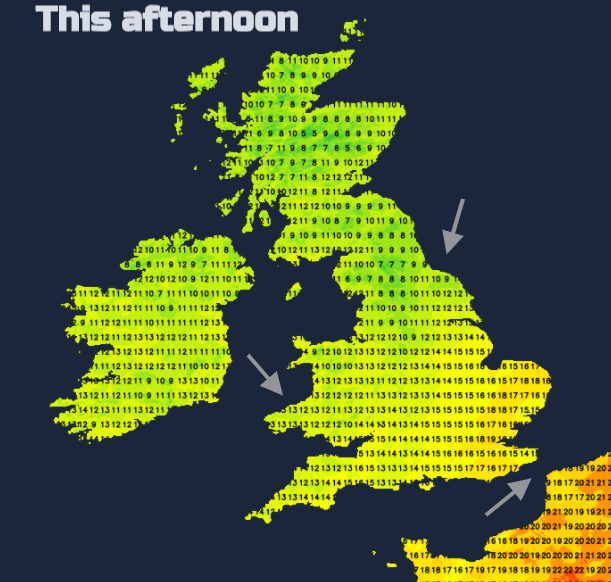 Temperatures range from 12 or 13c in the north to the high teens for SE England. Quite a contrast either side of the front. Outbreaks of rain continue particularly from the Peak District across NE England. Clusters of heavier showers feed eastwards over southern Britain, funnelling along the Bristol Channel. For a time tonight, there will be clear skies, a spell of drier weather and the temperatures fall away into single figures. Still around 11 or 12C for southern counties of England. 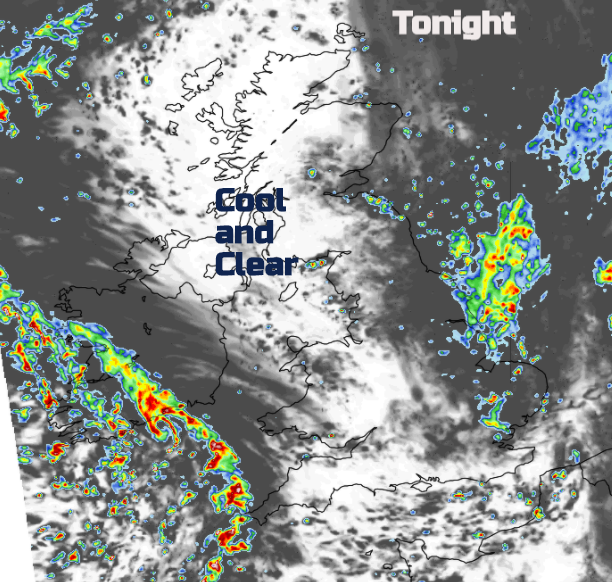 By Wednesday a deepening low will have appeared from the Atlantic, with early rain. Heavy bursts will have already moved over SW Britain with a band of rain over Northern Ireland, Wales and reaching into SE England, even NW England for Wednesday morning. This band pushes north into more of northern England and east into SE England and East Anglia followed by clusters of showers for SW Britain. Ahead of all of this will be a sunny but cool start for Scotland and depending on how the rain band pivots, also Co Tyrone and Derry. As the low centre moves over the far south of Ireland towards Cornwall there will be westerly gales veering to the NW. Southeast England will have a moderate SE wind by lunchtime, the Central Belt of Scotland seeing a brisk easterly and bands of heavy showers continue to swirl about.

By Thursday evening, the low centre will be moving eastwards through the English Channel still with strong winds and heavy showers, but it leaves behind a colder northerly flow. Showers feed down for a time in the usual exposed areas. 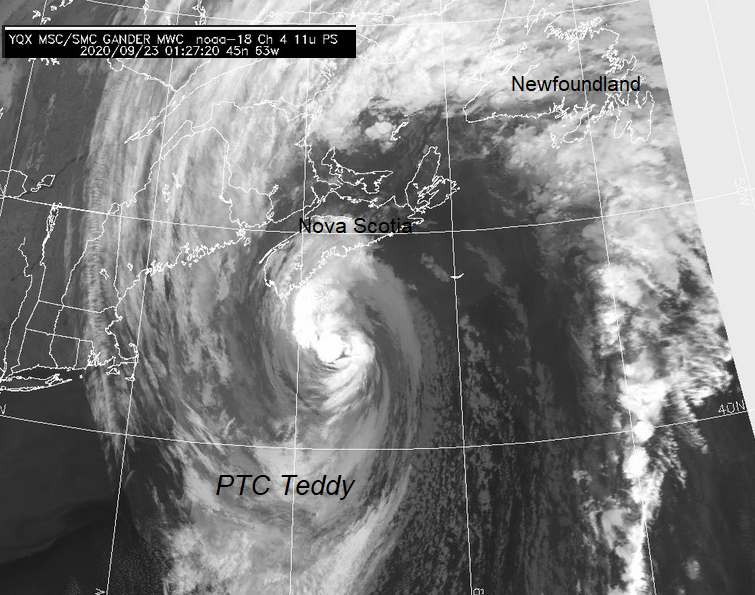 By Friday you will be noticing the wind. A fresh chilly north to NW wind. It does ease off slowly during Friday evening but before 10pm it will feel cold, you’ll need a coat and hat. The low pressure pulls away towards Denmark and although there will be some wet weather at times for western areas, overall, there will be a lot of fine weather this coming weekend.

Eastern Canada has been feeling the effects of what was Hurricane Teddy already this week. Landfall is forecast for Post-Tropical Cyclone (PTC) Teddy over Nova Scotia this morning bringing destructive waves, a storm surge, lashing rain and tropical storm force winds.