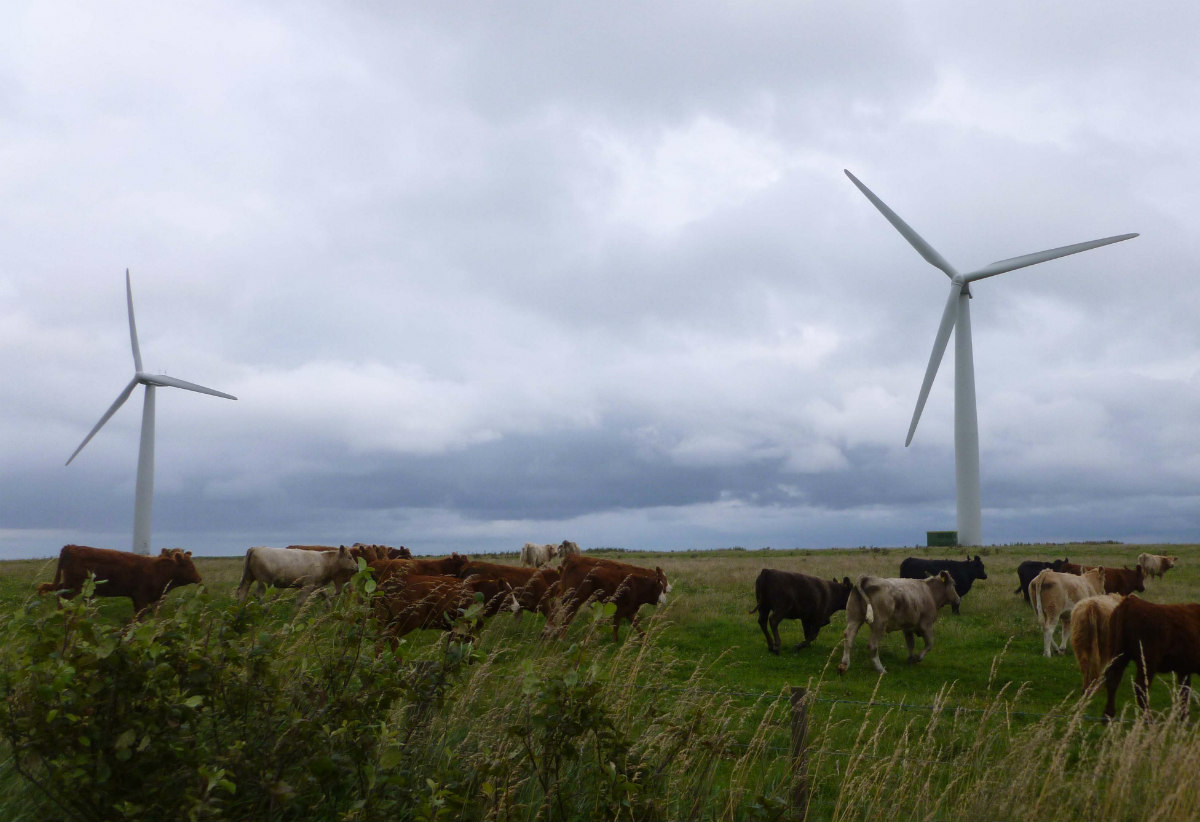 Today marks the Autumn Equinox, when the sun passes the equator moving from the northern to southern hemisphere, with the start of the astronomical autumn. The weather is also changing from summer to autumn after today. It’s been rather dry and warm by day for much of the month so far, particularly across southern areas. But that’s all set to change, as the jet stream that’s been well to the north of Britain sinks south and introduces unsettled conditions with showers or longer spells of rain along with windier conditions. Over the other side of the pond, after skirting east of Bermuda yesterday, Hurricane Teddy is forecast to barrel into Atlantic Canada mid-week. This storm will pull north a ridge of high pressure across the Atlantic, which will buckle the jet stream, which in turn will pull down a much colder polar maritime airmass across all of Britain from mid-week.

For now, one more fine summer-like day for England and Wales before the weather takes a turn for the worse for the rest of the week. Perhaps some mist, fog and low cloud slow to clear this morning across parts of the Midlands and Wales, otherwise some decent spells of sunshine this morning. Scotland and N. Ireland cloudier and windier this morning, with outbreaks of rain across the far north and northwest of Scotland.

Sunshine will become confined to eastern England through the afternoon, as western and northern areas of England along with Wales join Scotland and N. Ireland to increasingly cloudier skies encroaching from the west, with patchy drizzle developing over western and northern hills. Meanwhile, rain will turn heavier across NW Scotland while spreading east across much of western Scotland and N. Ireland by the evening, then the rest of Scotland through the evening.  Becoming quite windy across northern areas too, ahead of the cold front bringing rain in later. 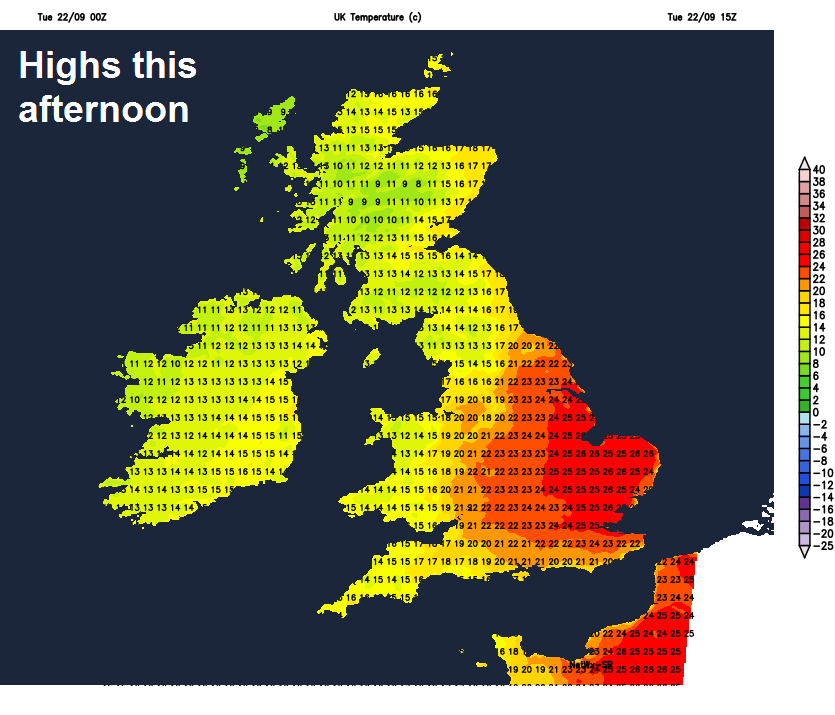 Turning cooler and fresher across the north and west with the increasing cloud, afternoon temperatures reaching 15C in Glasgow and Aberdeen, 16C in Belfast, 19C in Cardiff, warmth of the past few days hanging on across eastern England – where it’ll be sunniest longest too, temperatures reaching 22C in Hull, 25C in Norwich and London.

As we go through tonight and into Wednesday morning, the cold front bringing rain in across Scotland and N. Ireland this evening will continue east across northern England and Wales overnight accompanied by gusty winds, while rain develops further southeast across southern England and East Anglia as a new cold front forms here. Clearer, breezy and colder conditions moving in across Scotland and N. Ireland, but with showers across western Scotland, temperatures here dropping to 5-8C before dawn, but still mild in the low to mid-teens across southern and eastern England.

Outbreaks for England and Wales slowly clearing east on Wednesday, the rain becoming heavier across eastern England for a time before clearing east in the evening, while turning windy here too. Drier and brighter but colder conditions across Scotland and N. Ireland in the morning extending southeast across northern England, Wales, Midlands and SW England through the afternoon – but with a few showers across more western parts. Quite a drop in temperature across the board compared to past days, temperatures reaching just 11-13C across Scotland, N. Ireland and the far north of England, further south 14-19C at best. 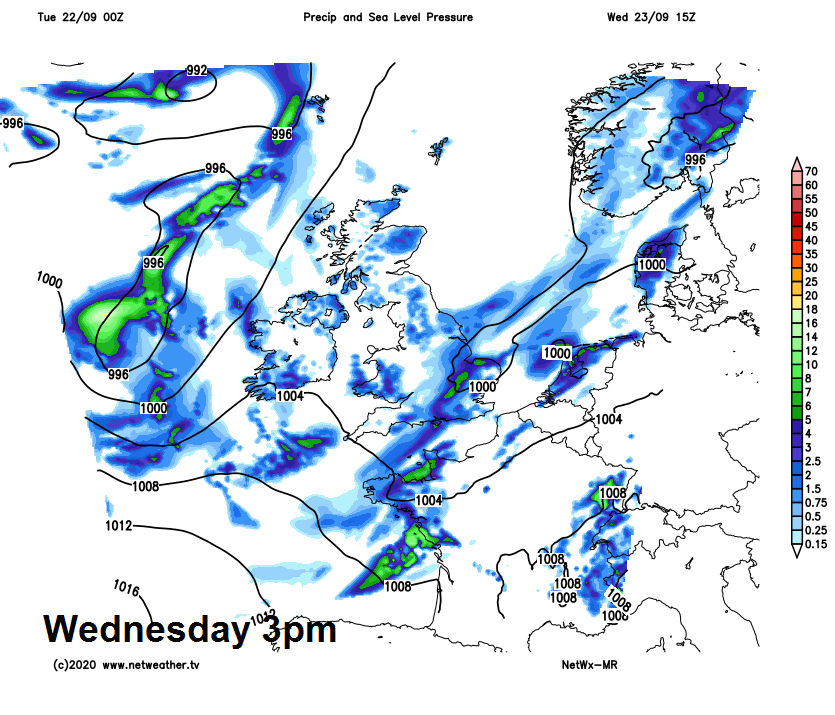 Rather cool across all parts on Thursday and Friday. An area of low pressure will drift east across Britain on Thursday, with showers circulating around it across many areas, with some sunny spells between showers. Perhaps longer spells of rain developing and windy across the southwest and northeast, gales developing across SW England later on Thursday. Winds turning northerly on Friday, which will be quite strong and gusty, further showers spreading south, heaviest and most frequent towards the east, but also some sunny spells. Temperatures ranging from 10C in the north of Scotland to 16C in the south of England.

Some weather model uncertainty for the weekend, perhaps dry and bright while less cold for many on Saturday, as a ridge of high pressure builds in. But showers may return from the west on Sunday after a dry and bright start, as Atlantic fronts move back in.