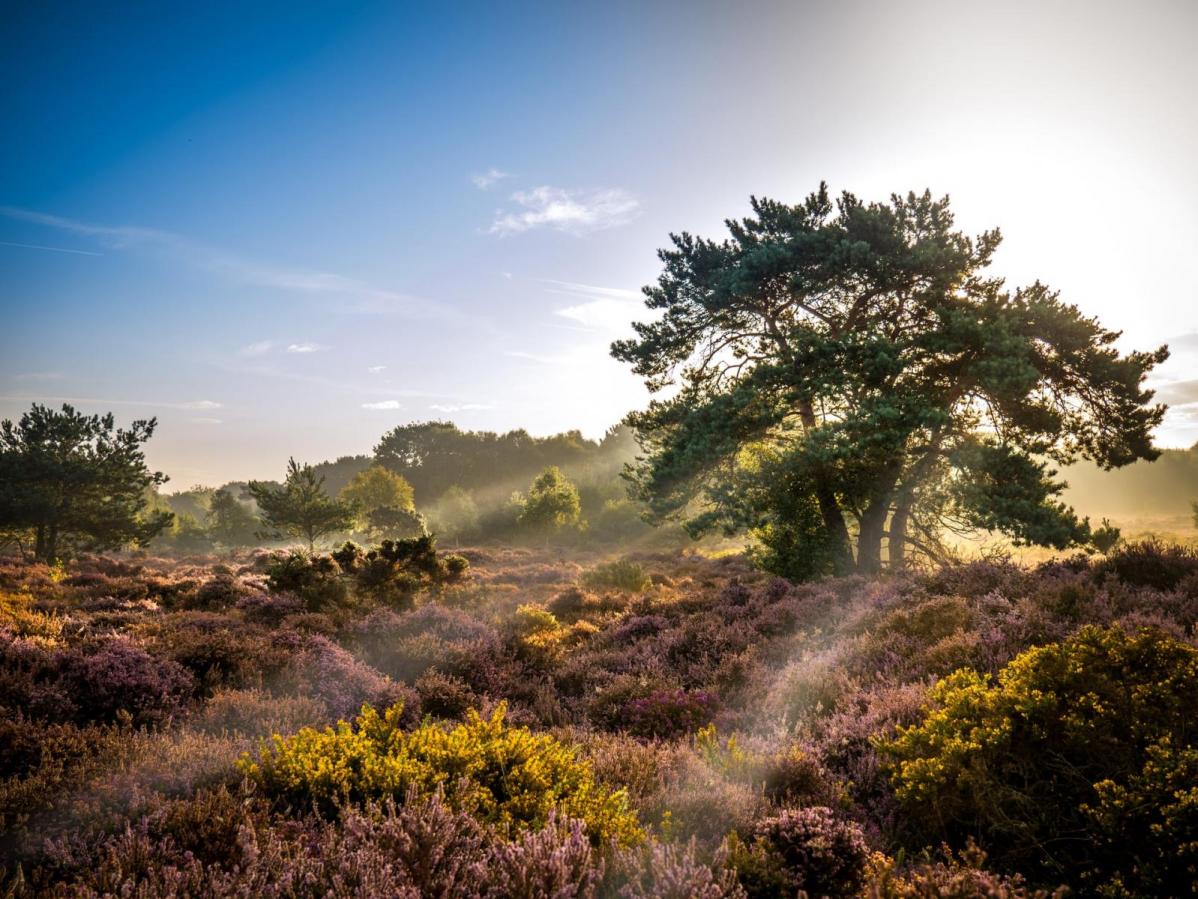 It was cooler yesterday than Friday, but even so, London still reached 27.7c, and many parts of the country were into the low-twenties. Today will be a touch cooler again, but if you're on the lookout for the return of hotter weather, you're not likely to have to wait too long.

The animation below shows what's expected to happen, as warmer temperatures make a comeback into midweek, with increasingly hot air then likely to move up off of the continent towards the end of the week.

For now, though, maximum temperatures today (Sunday) will be into the high-teens or low-twenties, with the higher end of that scale in southern and central England. Like yesterday, it'll be a day of sunny spells and scattered showers, with the north and west of the country liable to see the bulk of those - blown through on a reasonably stiff westerly breeze.

This evening and overnight, many of the showers will ease with sAskies clearing, but the cloud will bubble up again on Monday to bring another similar sun and showers type of day. A ridge of high pressure building in from the southwest will kill off the showers from the west during the day though to bring a sunny, dry end to the day for most. The exceptions to that rule are likely to be in northwest Scotland, where showery rain will continue to move in through the day, and also perhaps southeast England where a few of the earlier showers may linger. Temperatures on Monday will about be on a par with today. 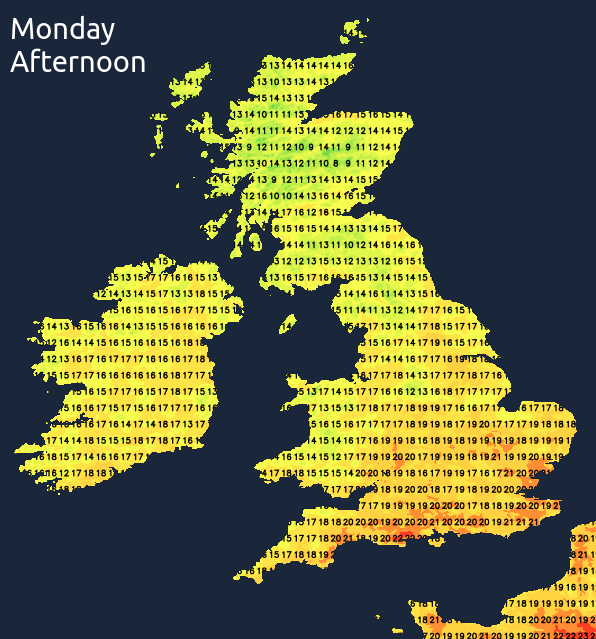 Tuesday will then bring a more notable spell of wet weather, as an Atlantic low pressure system pushes its fronts into the UK and Ireland. It'll not affect all parts though, with the north and west seeing the bulk of the rain. The warm front will arrive first, running up from the southwest during the day. 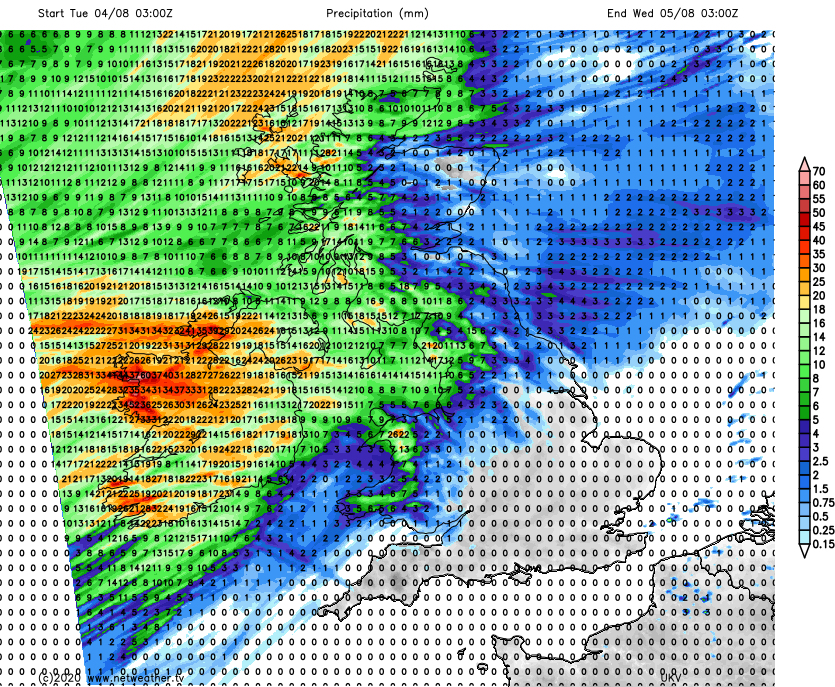 That'll then be followed by the cold front into Wednesday, which is again likely to drop most of its rain in the north and west. 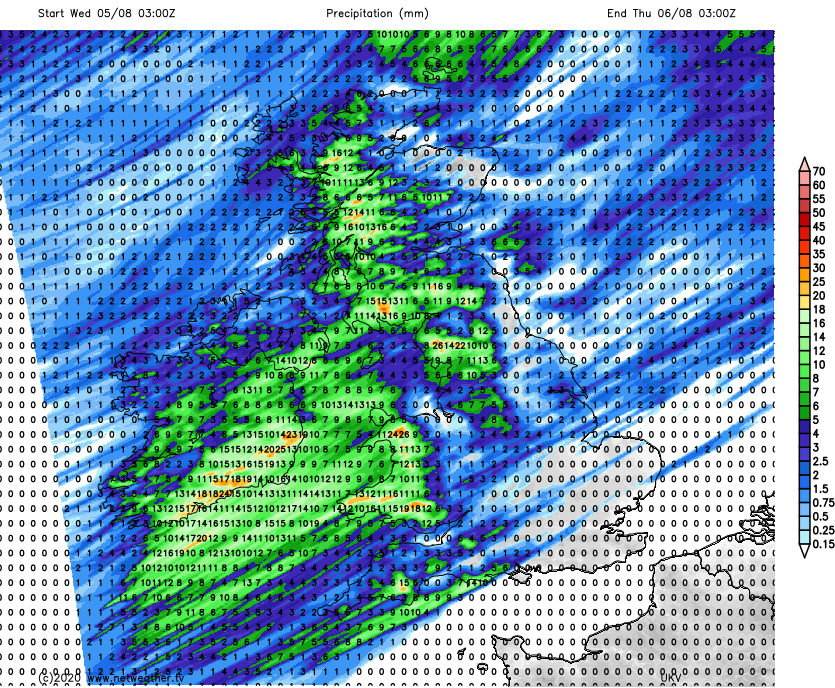 Meanwhile further southeast, it's drier with some sunny spells. And by Wednesday, the southeast corner in particular, is likely to start to see a rise in temperatures, with highs into the mid, maybe high twenties.

Thursday is liable to see the last of Wednesday's cold front still lingering in parts of England and Wales, but it'll be a weak affair by then, with some spots of rain but mostly just cloudier skies likely. Away from that, it'll be drier and sunnier with temperatures lifting toward the mid-twenties more widely, perhaps higher in the south and southeast - dependent on where the remains of the front is sat. 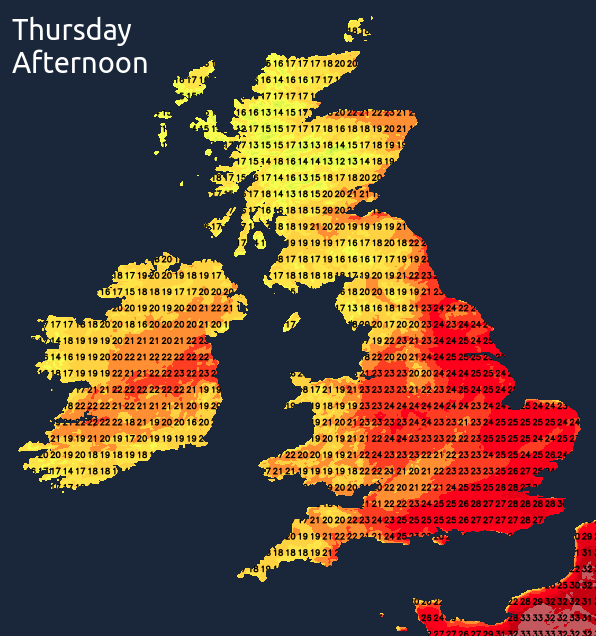 The end of the week and into the start of next weekend is set to see hotter air move up off of the continent, although the northwest of the country may stay more unsettled and cooler with fronts potentially bringing rain at times.