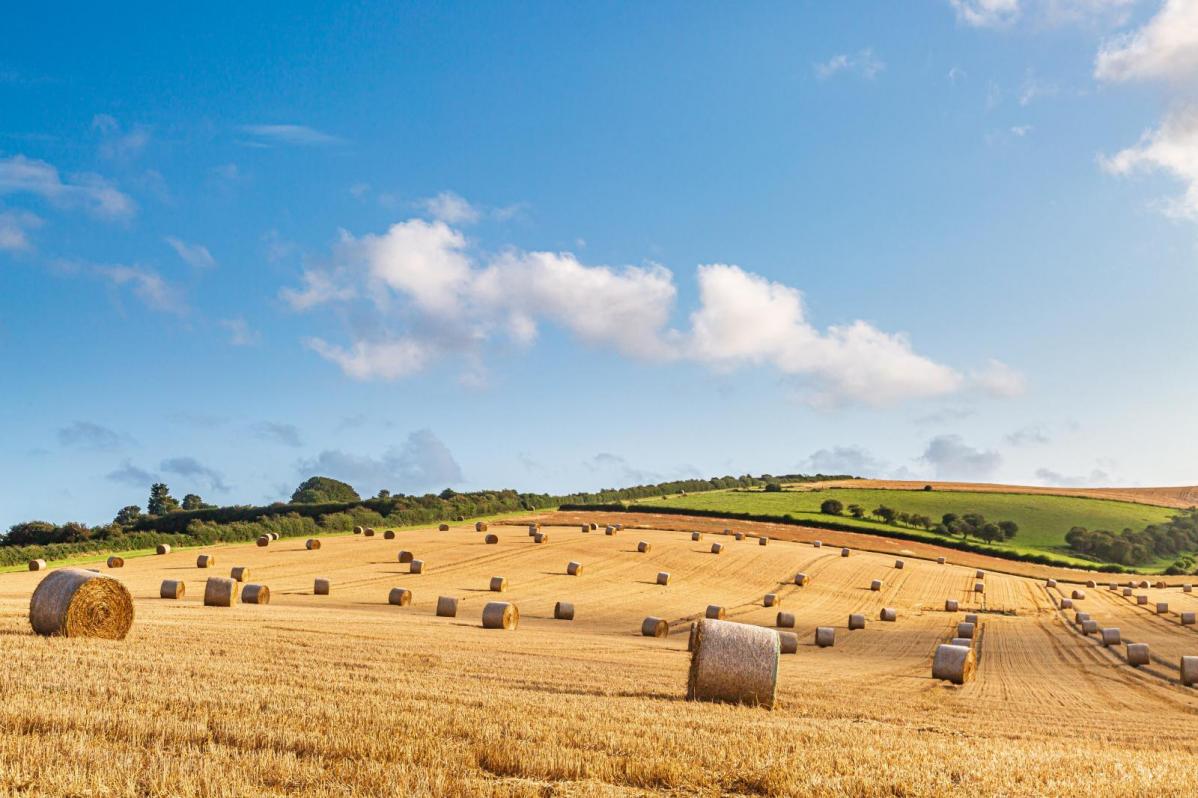 A fine day midweek before a new Atlantic low brings rain to the NW of the UK tonight and on Thursday. That low pressure then enables a south-easterly flow of much warmer air over the UK and by Friday temperatures are forecast to reach 30C or higher for inland southern Britain. And there is some thunderstorm interest for the SE. 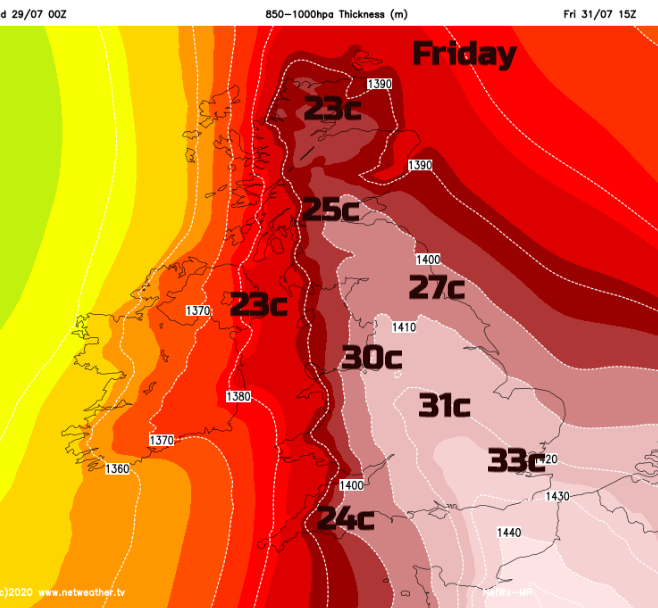 A dry day with sunny spells across Britain although cloud will increase for Northern Ireland as rain edges up from the south this afternoon. There has been a cool start in the north but with light winds and sunshine, much of England will see temperatures into the high teens or low 20sC and feel pleasantly warm. Brisk NW winds and still a peppering of showers for the far north of Scotland thanks to a low pressure continuing to lurk nearby over southern Norway. The showers ease during the day for the Northern Isles. 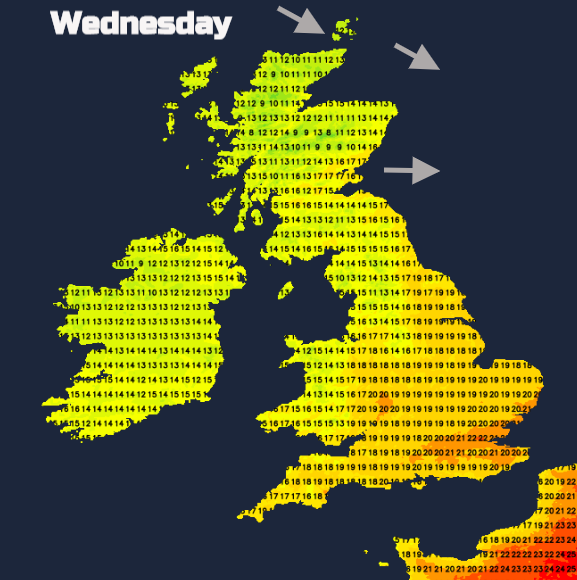 Cloud will cover a central swathe of Britain as rain moves over Northern Ireland, Stranraer, Holyhead and the Irish Sea. The winds pick up for coastal areas with the rain, northern Scotland with clearer skies will be cold, down into single figures but for much of Britain, it will be a still night.

Co Kerry in the far SW of Ireland has a weather warning for heavy rain until Thursday morning with 2” forecast. Southern Britain remains dry with little rain reaching the rest of eastern Britain, but the rain will be heavy for Northern Ireland in the morning. Extending into NW England and over the Pennies. NE England could see some rain early on Thursday but the band pushes northwards over more of southern Scotland into the Central by lunchtime. The rain becomes heavier as it continues northwards through central Scotland, but the west coast will be very wet as the rain reaches the Western Isles late afternoon into the evening. 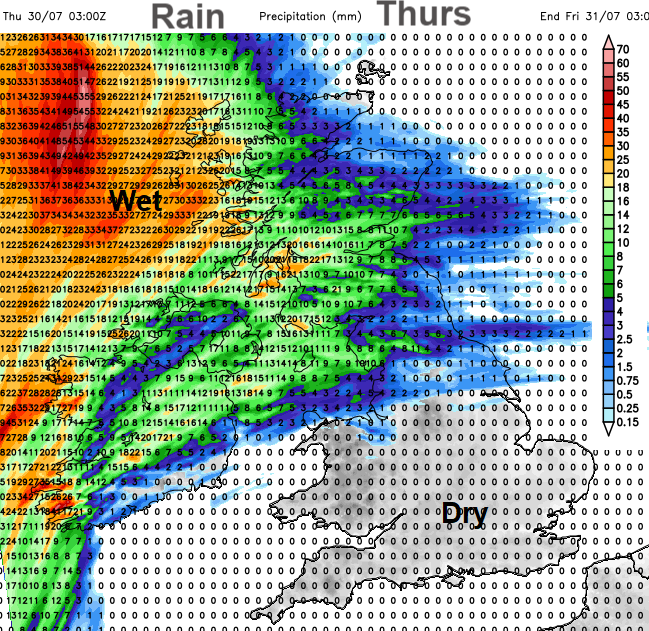 That is from the warm front. The cold front will move across the UK during Friday and Saturday morning, hence the short-lived heat surge. Along the cold front, there will be heavy showers and although there won’t be many showers in the south, there could be something lively with thunderstorms.

With the warm front away to the north of Scotland, the cold front will edge into Co Fermanagh early on Friday making its way across Northern Ireland by lunchtime. During Friday afternoon a more showery band reaches western Britain with some sharp downpours. Meanwhile, there is the potential for thunderstorms to form and move over SE England up through East Anglia later in the day. However, although several ingredients are showing themselves (the heat, the cold front, elevated mixed layer), there is not much moisture at lower levels. Something to keep an eye on if evening lightning is your thing but uncertainty for now.

So, what about this heat?

Iberia currently has Heatwave warnings with temperatures inland for Spain and Portugal in the high 30s, even up to 40C. This very warm air will be pulled right up through the UK, peaking on Friday.

Thursday looks warm too for the southern half of the UK with temperatures into the mid, even high 20sC. The warmth reaches into northern England for Thursday evening.  Jersey could reach 30C. It stays warm overnight, London moving from 27C by day only down to 20C overnight before temperatures reach into the low 30sC on Friday. Most of the UK will see temperatures over 20C on Friday with Greater London and Home Counties most likely to see 33C and inland southern and central England into the low 30sC also Manchester reaching 30C. Scotland will see low to mid 20sC with 25C for Glasgow. Wales in the mid to high 20sC, Cardiff up to 28C. There will be a brisk SE wind over much of Britain. Northern Ireland keeps lighter southerly winds and SW England and Wales will have a light south-westerly wind. So, if you are thinking of heading to the beach in the heat and sunshine, it could be blustery.

A warm and muggy evening for eastern England until the cold front moves through with its showers. They may be showing on your weather app, but they will be hit and miss, so keep an eye on the Netweather radar. Saturday won’t be as hot but still warm for SE Britain with temperatures in the mid 20sC and a westerly breeze over the UK. Fine for most, just a few showers from the west. (Example below from June 2019) 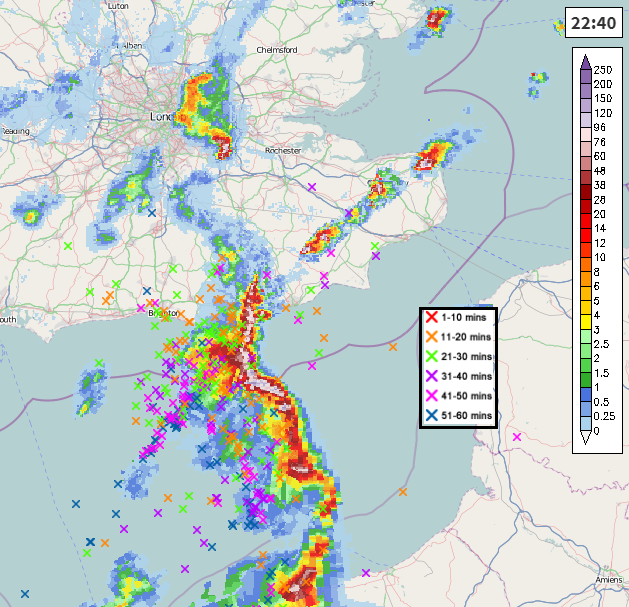 Sunday into Monday looks more unsettled and showery in the south with temperatures across the UK back to the teens and low 20sC mark.