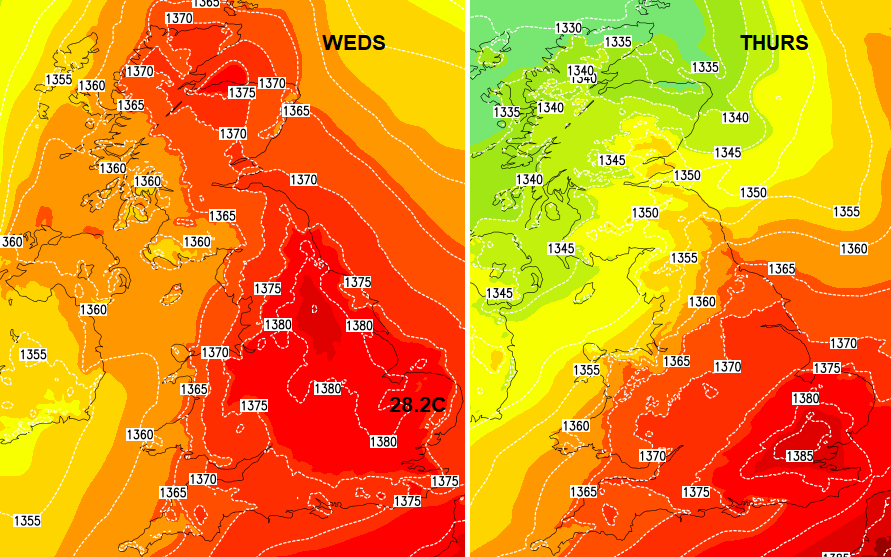 UK - Hottest Day of the Year so far on Wednesday 20th May with a top temperature of 28.2C (83F). Of course, it’s getting warmer at this time of year and we will see the “hottest day of the year so far”, quite a few times. But Wednesday 20th was very warm for most of the UK and the forecast looks wild by Friday. So, in these strange times of COVID_19 a grasp of warmth and sunshine can lift the spirits and might need to be recognised. England saw the highest temperature (not hottest temperature, that’s not a thing for a number), 28.2C at Santon Downham in Suffolk. 26.4C in Hawarden, North Wales and 24.2C at Aviemore in the Scottish Highlands.

England had seen 26.2C the day before, the previous hottest day of the year. 28.2C might get beaten again today in SE England but there is some cloud and a few showers about.

These changes during Thursday bring some uncertainty surrounding the risk of thunderstorms, mainly for SE Britain. Across the UK, temperatures will rise into the high teens and 20sC. 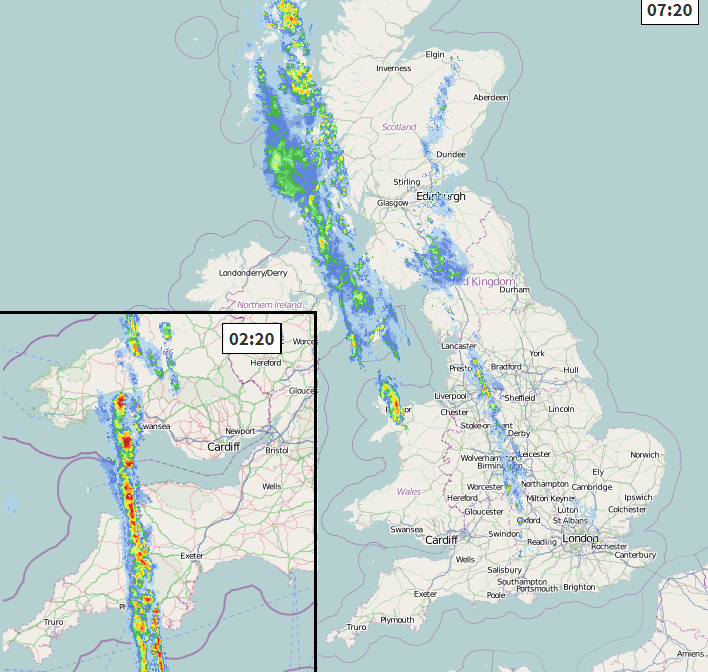 However, the forecast is going to take an autumnal turn by Friday with gales as a deep Atlantic low passes by bringing some welcome rain.

With the easing of lockdown in England, some enjoyed the sunny, warm outdoors or chance to meet up with “allowed” people. In other parts of the UK where the message is still Stay at Home, sunbathers were getting the attention of local police. Everywhere the advice was to remember to social distance and also put your sunscreen on. After two months plus cooped up inside, it is easy to forget and then get burnt.

Many areas hadn’t seen heat like this since last summer, Highland Scotland last September. The temperatures will fall away during Friday and for the weekend, staying in the mid to high teens but for those with a Bank Holiday Monday, it does look more settled and warm again.

As Cyclone Amphan hit eastern India and Bangladesh, evacuation of millions were complicated by the coronavirus pandemic. Kolkata (formerly Calcutta) has been badly hit with widespread damage and flooding. It has been a Super Cyclone out the Bay of Bengal, the strongest on record in the area. Massive storm surge is usually the killer but with modern warnings, the impact of this at landfall has been lessened. Falling trees, power lines and masonry caused deaths on Wednesday.

The evacuation effort was complicated by the COVID-19 pandemic as people now face no electricity, loss of mobile networks, no clean water and water logged streets and countryside. Many people will have to stay in shelters and crowded conditions with a loss of housing and crops