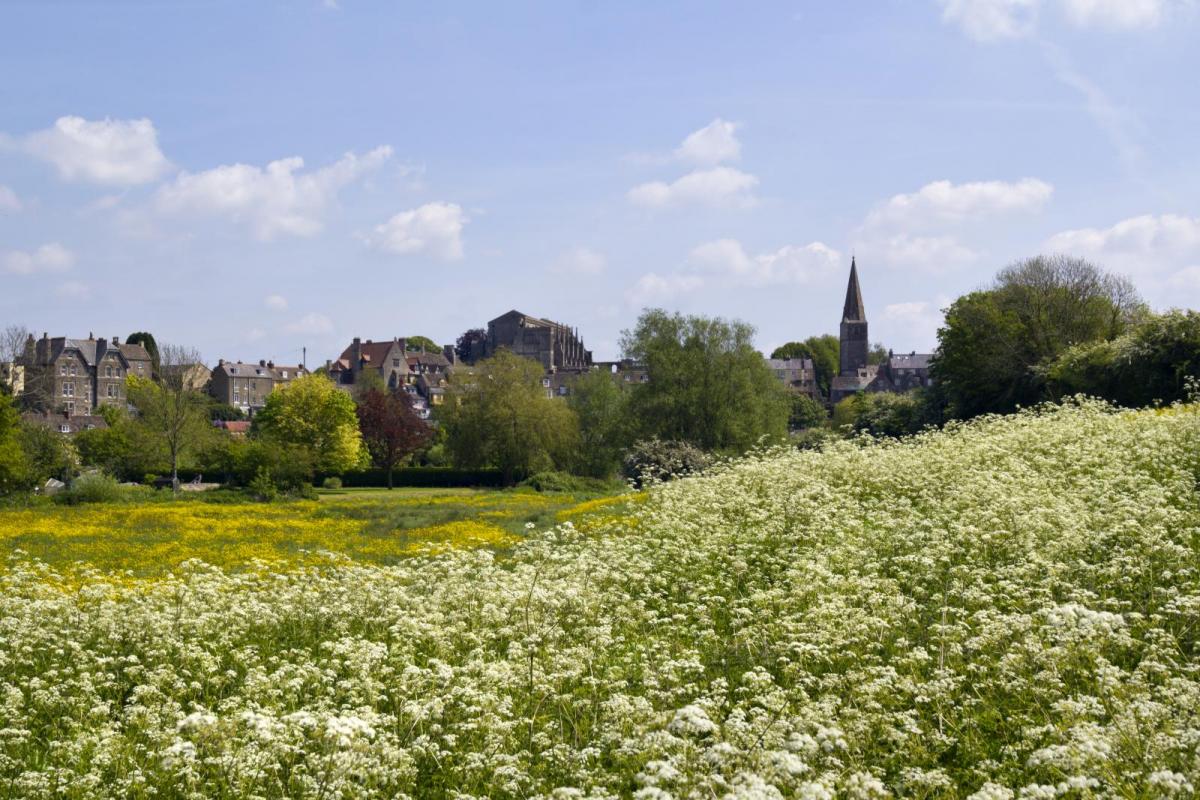 Other than a few showers across eastern England today and some rain for the southwest on Tuesday, for many it will be largely dry this week, with high pressure in control. It will turn briefly warmer too, with temperatures climbing back into the low twenties on Thursday, Friday and probably Saturday too. However, it’s possible that we may see a cold arctic plunge spread down across Britain on Sunday, bringing a chilly shock after the warm up of the previous few days. 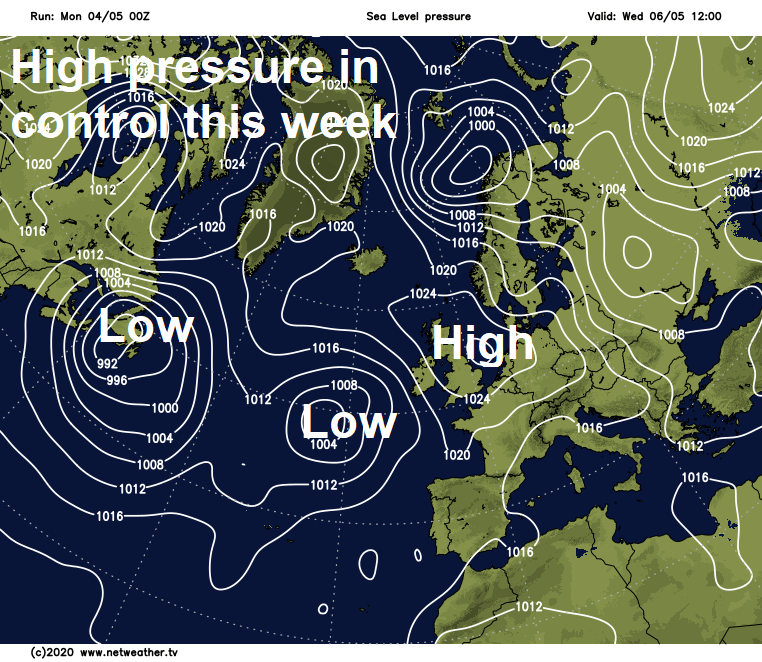 For now, it’s been a generally cloudy start across the south and east of the UK, with a cold front slipping southeast down the east bringing some showers across eastern Scotland and NE England. A sunnier start for north Wales, NW England, Northern Ireland, the far north and west of Scotland, chilly though in the far northwest, with clear skies overnight allowing temperatures to fall close to freezing bringing a frost across N. Ireland and NW Scotland. 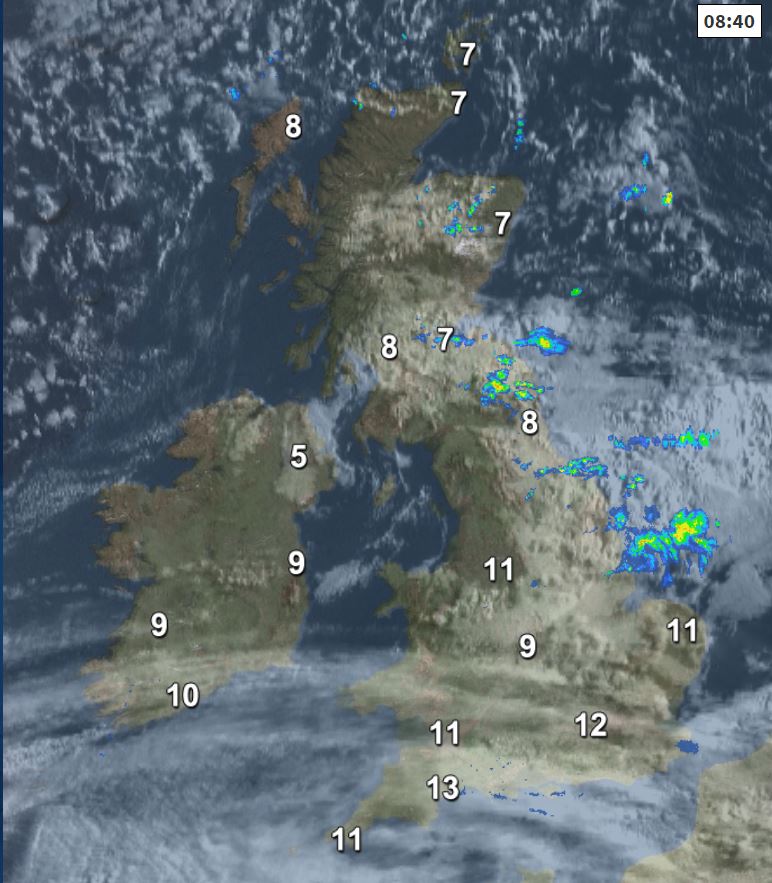 Showers across the northeast will continue to run southeast across eastern England through the morning and into the afternoon, turning locally heavy, reaching East Anglia and the London area later. Otherwise any early cloud will tend to break up allowing sunny spells, the best of the sunshine across the west and northwest of Britain. Afternoon highs reaching 11-13C across Scotland and N. Ireland, 13-19C across England and Wales, though cooler along eastern coasts with an onshore breeze.

Any showers across SE England and East Anglia this evening will tend to fade away into the night, leaving a dry night for most with variable cloud in the east and lengthy clear spells elsewhere. Turning chilly across the north, with a touch of frost possible in the Highlands. The exception will be across Devon, Cornwall and the Channel Islands – where thicker cloud and heavy rain will move in, perhaps with the odd rumble of thunder, accompanied by a strong easterly wind.

A wet and windy start across SW England, the rain spreading a little further north across the far south of Wales and further east across central southern England and perhaps towards London and the southeast through the morning, but the rain tending to turn lighter and more patchy as it heads east before fizzling out by the evening. Elsewhere remaining dry with decent spells of sunshine and variable amounts of cloud. Cool under the cloud and rain across the southwest, temperatures reaching low teens at best, elsewhere temperatures reaching 15-17C inland away from the far north of Scotland and eastern coasts – where it will be cooler with an onshore breeze.

High pressure firmly planting itself over the UK on Wednesday, with most places having a dry and fine day with plenty of sunshine, temperatures creeping up too, with highs of 18-20C inland from central Scotland down to southern England, cooler around coastal areas with temperatures reaching the mid-teens at best. More in the way of cloud across Devon, Cornwall and parts of Wales could bring the odd shower, more particularly towards Atlantic or Celtic Sea coasts.

Another largely dry and sunny day in-store on Thursday with high pressure in control, though thicker cloud spilling off the Atlantic across Ireland, N. Ireland and the far west of mainland UK could bring a few showers. Temperatures widely in the high teens or low twenties away from coasts. 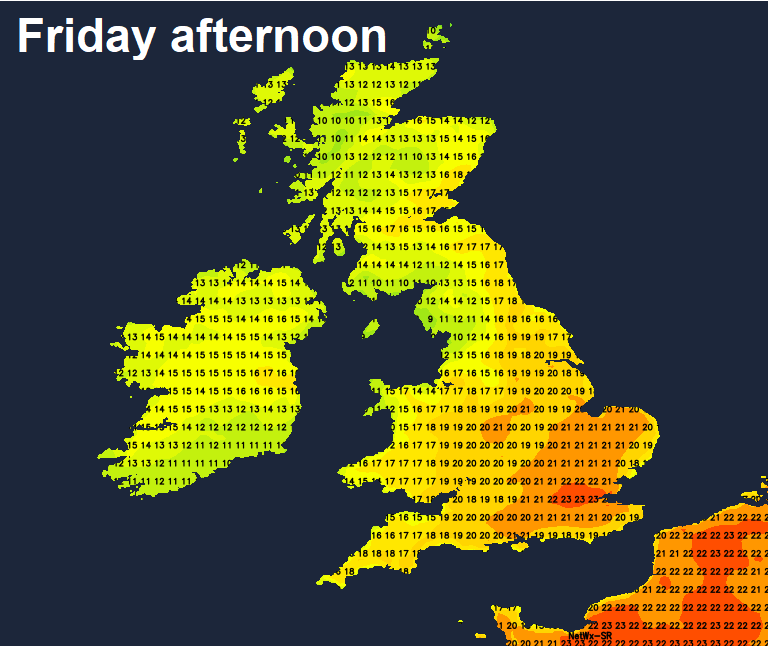 Perhaps more in the way of cloud with a risk of showers for northern and western areas on Friday, the best of the sunshine and warmth across central, southern and eastern England – where temperatures will reach 20-23C inland.

Saturday warm and bright across England and Wales, but perhaps a risk of heavy showers developing in places. Mostly dry but turning cooler from the northeast across Scotland, perhaps some showers reaching the far north later in the day. For now, it looks like turning colder across all parts on Sunday, as increasingly strong northeasterly wind develops, sweeping in cold arctic air. Perhaps dry and bright for many, but the northeast of Scotland could see some wintry showers, with some showers spreading down along eastern coasts further south. Temperatures in high single figures or low teens at best. 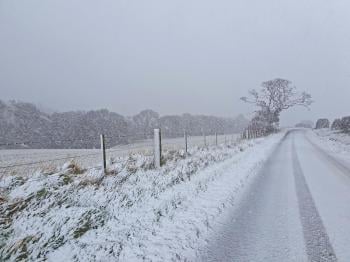