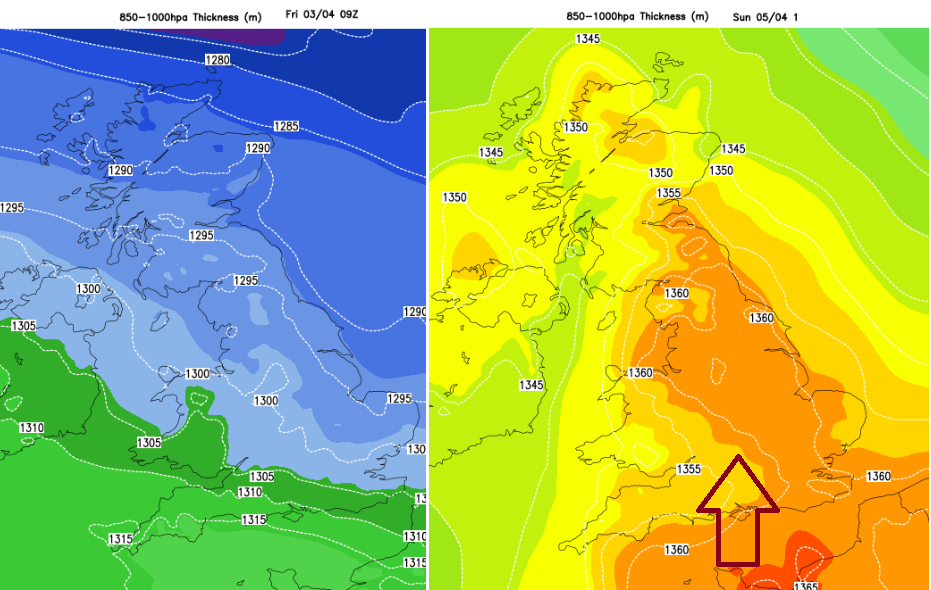 UK weather: A nippy Friday but warmer and windy this weekend.

Overnight the UK was in a cold flow from the north and with clear skies, temperatures fell, and it is a chilly start to Friday with frost in places. Today is a day of transition with pressure rising, so not as windy. By the weekend, as the wind shifts to a southerly then warmer air will flow up over the UK and temperatures will rise into the high teens, even low twenties. There will be strong sunshine but still brisk winds. London, Birmingham, Manchester and other areas could see 20C , 68F 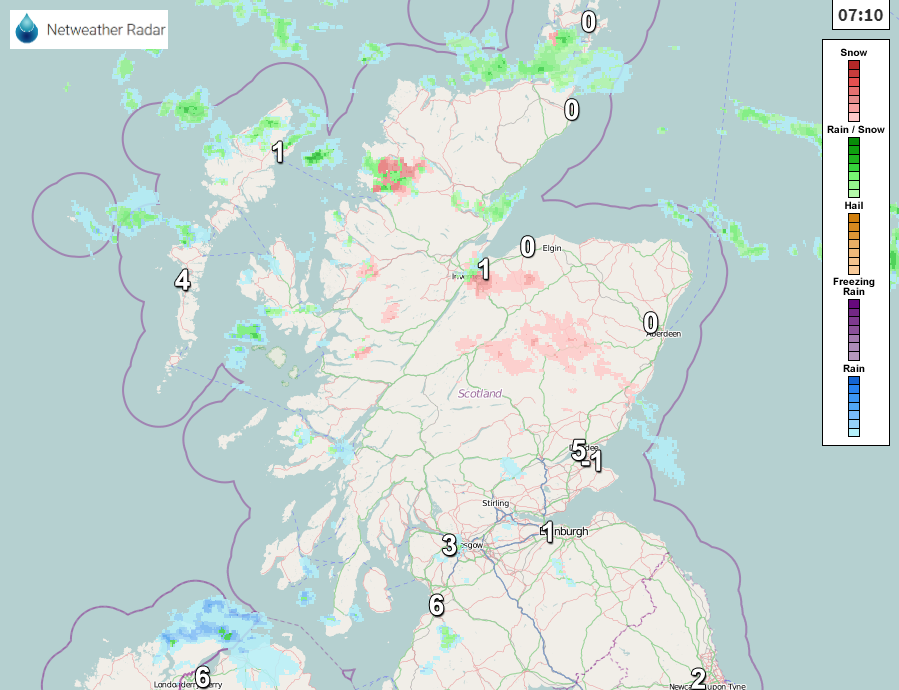 Northern Scotland has had a taste of winter for the start of April with NW gales and snow showers. The wintry showers continue today as the strong winds ease and it will feel cold in Scotland with temperatures of 7 or 8. For Northern Ireland, there will be a scattering of rain showers with a lot of fair, bright weather and light winds, temperatures of 9 or 10C. Wales will see any early showers clearing then a fair day with bright spells and temperatures of 8 to 11C in very light winds. For southern England, there will be fine weather but still feeling cool. Good sunny spells could lift the temperatures to 12 or 13C but for central and northern England there will be a few rain showers. One lot head east this morning with wintry bits over the Pennines and after a lull a few more appear from the Irish Sea for Friday evening 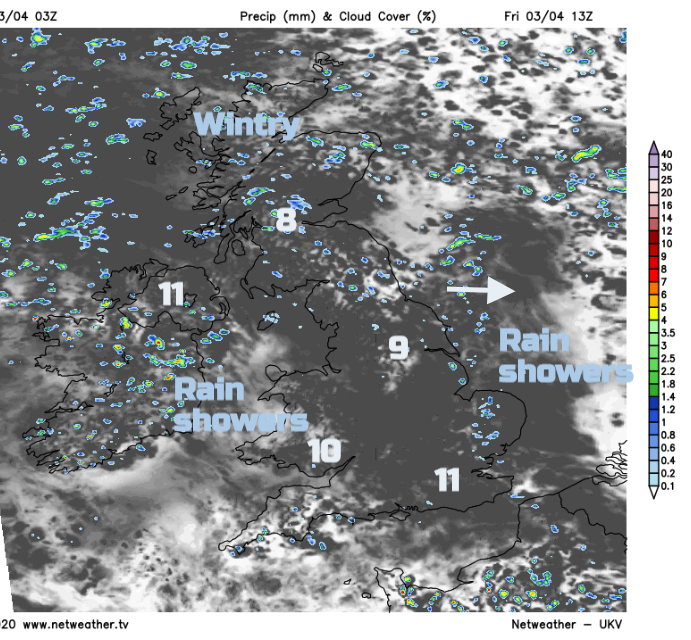 The high is building in but a warm front will brush western Scotland this evening bringing patchy rain and hill snow to the Highlands and fades as it reaches Grampian. For other inland parts of Britain, there could be a touch of frost under clear spells, even some fog as the winds fall light.

By Saturday morning, the warm front rain will be over the far north of Scotland, low pressure to the west in the Atlantic and the High will have slipped eastwards over Europe. It has been very cold for parts of Europe such as Austria, Italy and France with a severe frost which caused agricultural concerns.

For many Saturday will be a fine, bright or sunny day with hardly any breeze to start the day but a light southerly for Britain and a moderate wind for Northern Ireland by the afternoon. There will be the odd shower here moving over central Scotland with temperatures across the UK 10 to 15C 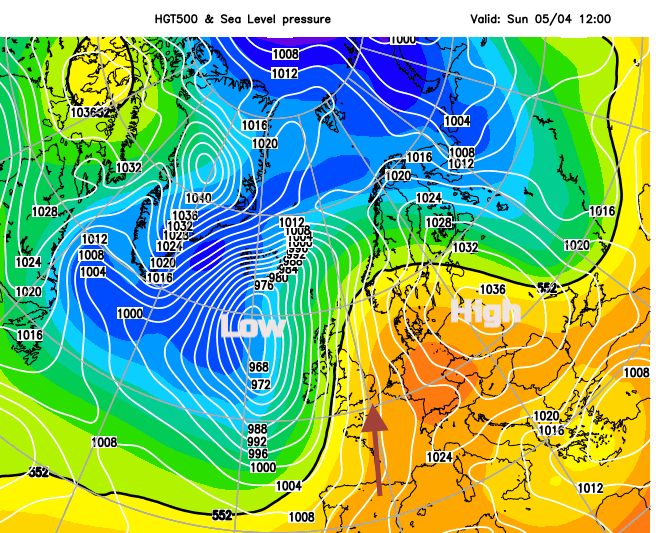 The low will edge closer to Ireland this weekend and the winds will pick up. On Sunday the southerly winds will become fresh to strong as we see the peak of the warm air. There is a balance between the frontal bands coming in from the west with showery rain and more cloud and the sunshine and warm southerly flow. 15 to 20C looks most likely, 12 to 14 for Northern Ireland with more cloud.  Later on Sunday, there will be strong southerly winds for NW UK as the cold front edges in from the west. So a windy end to the week, particularly for Northern Ireland and W. Scotland. Remember your sunscreen once you've got your Vitamin D.

A band of rain moves over the UK off out over the North Sea, many areas have been dry for a while. As the low moves towards Iceland, the winds for the far NW of Scotland need watching, a quite dramatic picture showing for Monday morning near to the Western Isles. The Met Office model has a risk of gales possible Sunday night into Monday with less extreme winds. 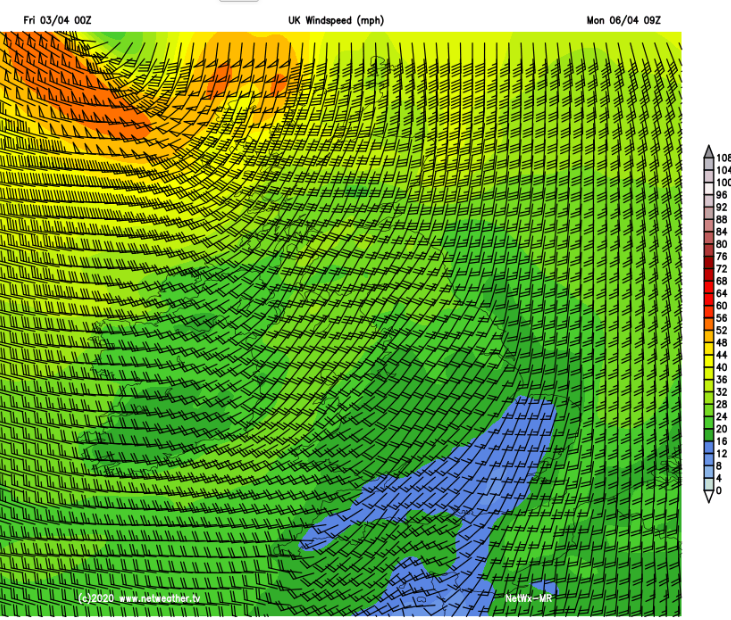 Colder air filters in for Monday night with a touch of frost as the High builds again, settling the weather down for Tuesday. From midweek onwards looks warm again. 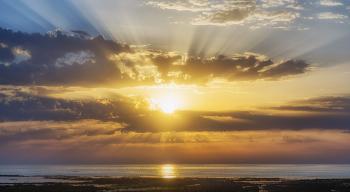