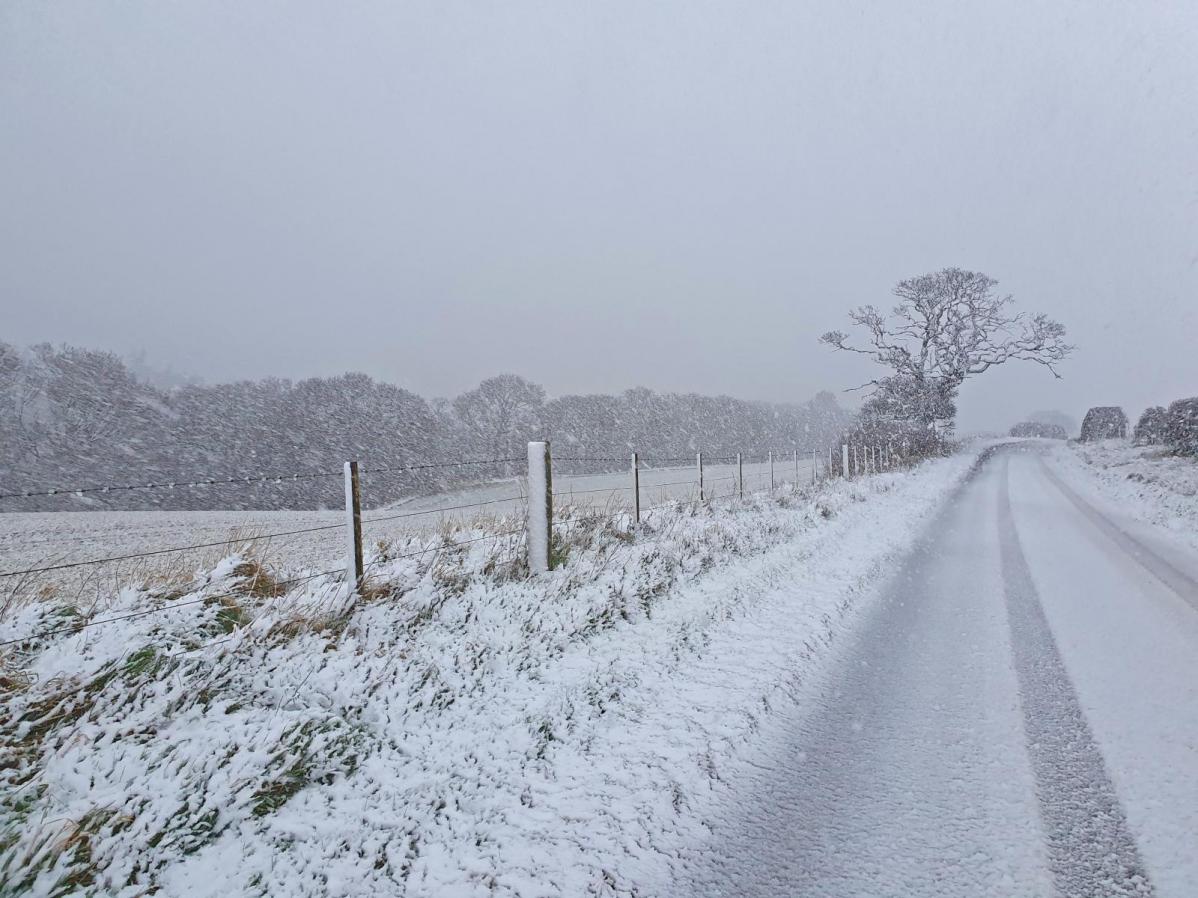 Monday morning snow and more rain with a cold end to February as the flood risk remains.

Another day and more rain. There is also some snow for a bit of variation, mainly over Scotland but Northern Ireland has seen some already today and northern England. There will be gusty winds for England and Wales and the risk of further flooding continues. 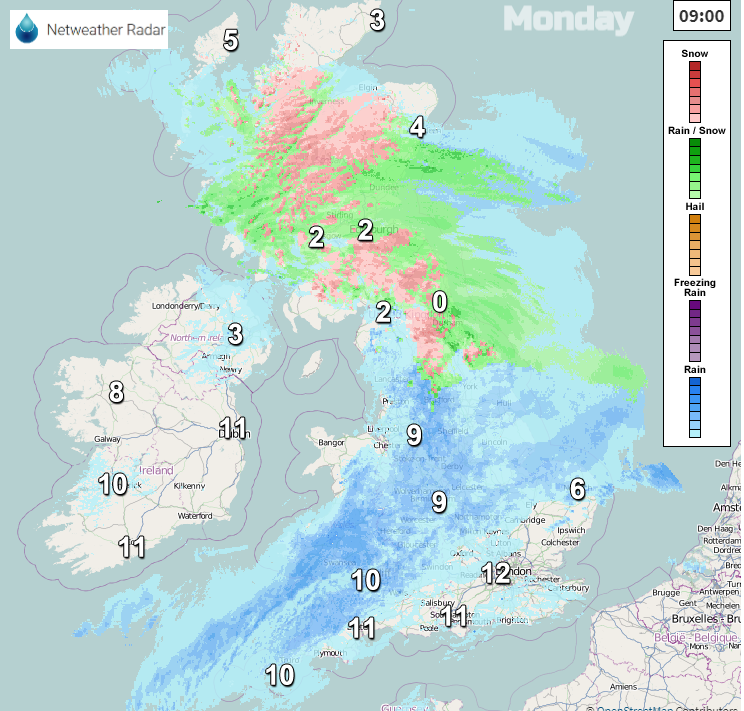 There are some schools closed today, first day back after half term. Conditions on the roads have been tricky with ice, lying snow or rain and poor visibility. There has been a decent covering in Co. Durham, Cumbria and Northumberland. More to come for Scotland.

A low pressure moved in overnight against cold air over northern parts of the UK. Some sources online had incorrectly labelled this as Storm Ellen, despite the UK Met Office widely commenting that there was not another named storm after Dennis. With two major weekend events already in February, no one should be causing undue worry with false news. There has been windy weather, more rain, more flood alerts and there is snow today but it is February, it is winter. The naming of Dennis and Ciara had worked well as they were significant events, windstorms with very heavy rain which led to widespread flooding. More discussion on the Netweather forum 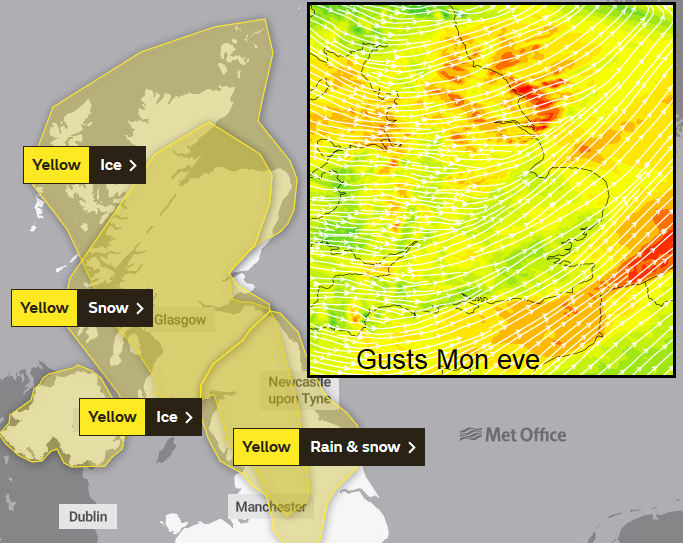 There are yellow warnings out today for Rain and Snow. It will also become more windy for England and Wales, with freshening SW winds, gusts over 50mph for coasts and hills. Later this afternoon there will be strong westerly winds for the Irish Sea and Isle of Man with strengthening winds for northern England and gusty conditions for the NE and Yorkshire as the low moves off into the North Sea this evening. 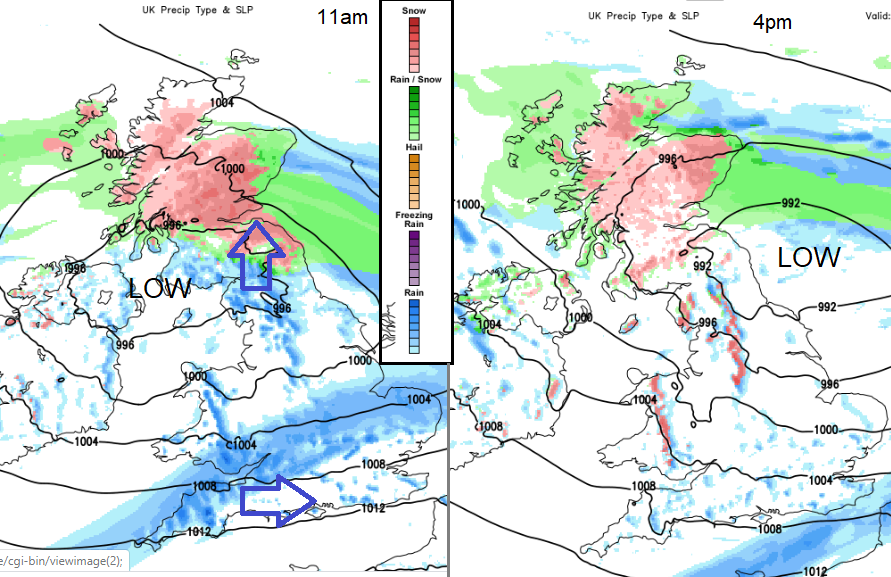 The River Severn at Shrewsbury is on Severe Flood warning with a river level peak still to come later on Monday. There are numerous other flood warnings and alerts.

Today there is very mild air behind this frontal band of rain and snow which is moving northwards, turning to rain before it clears. There will be more snow for northern Scotland today but an improvement for Northern Ireland and northern England. England and Wales will see temperatures of 7C to 13C in a mild SW wind which will be strong and gusty at times. Northern Ireland staying at 6 or 7C as the wind veers to the NW. 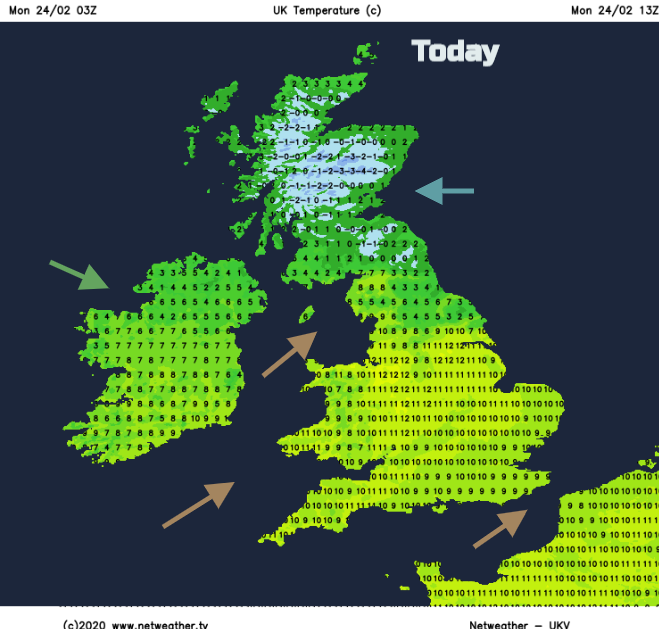 The whole system is heading east overall, so as the wintry weather clears from Northern Ireland and then Wales, the rain on the cold front will clear from SE England this afternoon but the frontal rain and snow over NE Scotland will take longer. Still over Grampian and around the Moray Firth for the evening commute home so there could be problems with ice and snowfall. On the A9, A90 and A96 although winds will be light. Pennine routes will be icy this evening with strong gusty winds over the tops and to the east into the evening, affecting the A1. 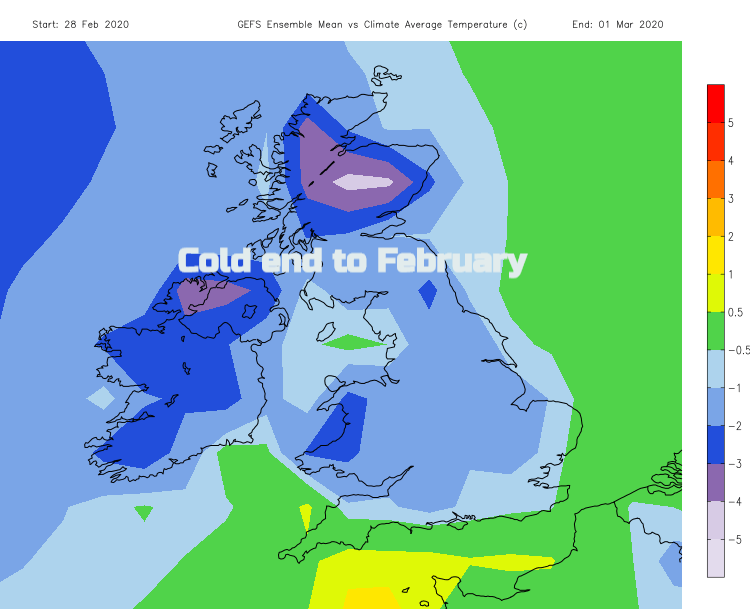 Tonight, everywhere turns colder as the winds ease down and skies clear. There will be scattered showers from the west with snow but not much. Tuesday will be colder for England and Wales after today’s mild weather. Many parts will be fair and bright but there will be showers of rain for southern England but of sleet and hill snow for Wales, NW England, Northern Ireland and western Scotland. A few will make their way inland. It stays colder for the rest of February with the risk of sleet and snow showers from the west. Eastern areas stay more sheltered. Flooding risk continues from this rain and melting snow.