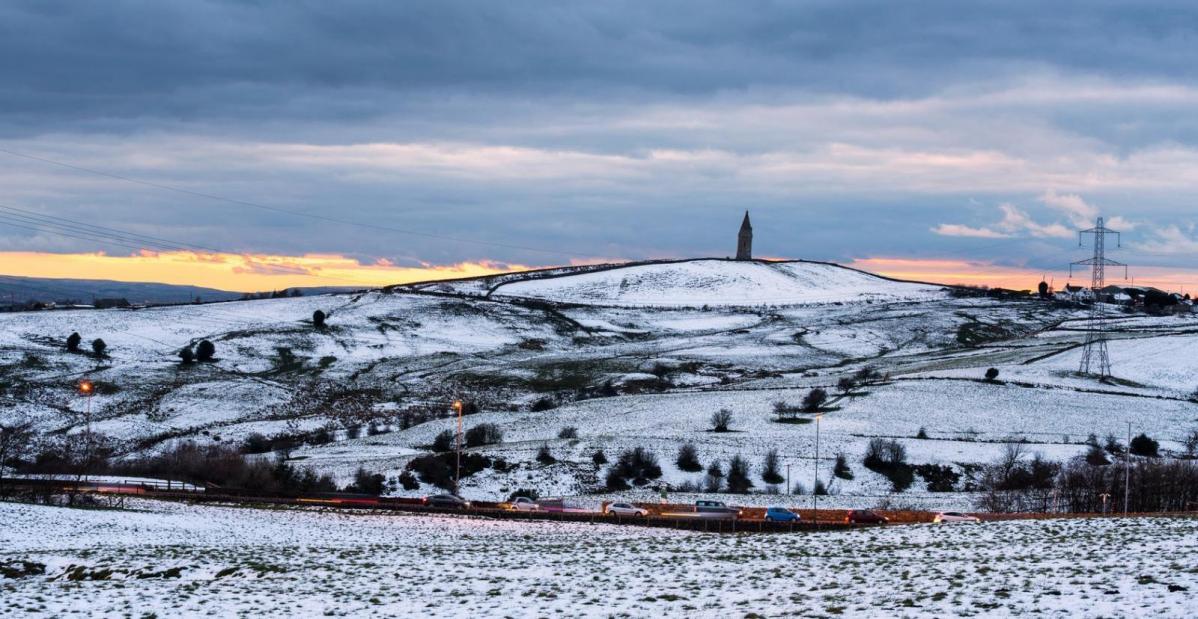 Wintry Start In The North, Cold Day With Showers In The West, Turning Milder Tomorrow

Snow is nothing unusual for the end of January, but it’s something that’s been rather absent this winter so far, even in Scotland. But, an increasingly cold airmass sweeping in from the west, sourced from the Canadian arctic, has allowed showery rain spreading in from the west to turn increasingly to snow overnight across the north, even to lower levels across Scotland and parts of N. Ireland. Bringing a covering of snow to start Tuesday. Today will be a cold and windy day, with further showers, mostly in the west and wintry over higher ground. A ridge of high pressure builds in on Wednesday, with mostly fine and dry conditions across England and Wales and again on Thursday, turning wet and windy with hill snow across Scotland on Wednesday and another spell of rain on Thursday. Turning milder across all parts from mid-week. On Friday brisk southwesterly wind will usher in cloud and outbreaks of rain for most parts, temperatures widely in double figures.

There’s been rain, sleet and some snow overnight moving across the north, snow falling to lower levels across Scotland and Northern Ireland, while further south settling snow had been confined to higher ground of northern England. So there is a risk of some snow accumulations in places in the north, which  may lead to some treacherous driving conditions this morning, particularly over higher routes, while at lower levels there is a risk of ice on untreated surfaces from overnight precipitation, as temperatures are widely close to freezing at daybreak. As low as -6C in the northern Highlands. Met Office Warnings for snow and ice are in place across the northern half of Britain.

The hills of Wales and moors of SW England may also have got a covering of snow from overnight wintry showers here. But across central, southern and eastern England it’s been rain showers overnight in places, though for most it's a dry and bright but cold start away from western areas where showers continue, with temperature a few degrees above freezing widely.

Overnight rain, sleet and snow has moved away from eastern Scotland, to leave a mostly dry and bright start here, but there are further wintry showers in the west and the general theme is for scattered showers affecting mostly western areas for the rest of the day, mostly rain at lower levels with hail locally and falling as snow over higher ground in the north, though the snow level rising through the day. The best of any dry and sunny weather across eastern Scotland, central and eastern England, though even here we could see the odd shower. 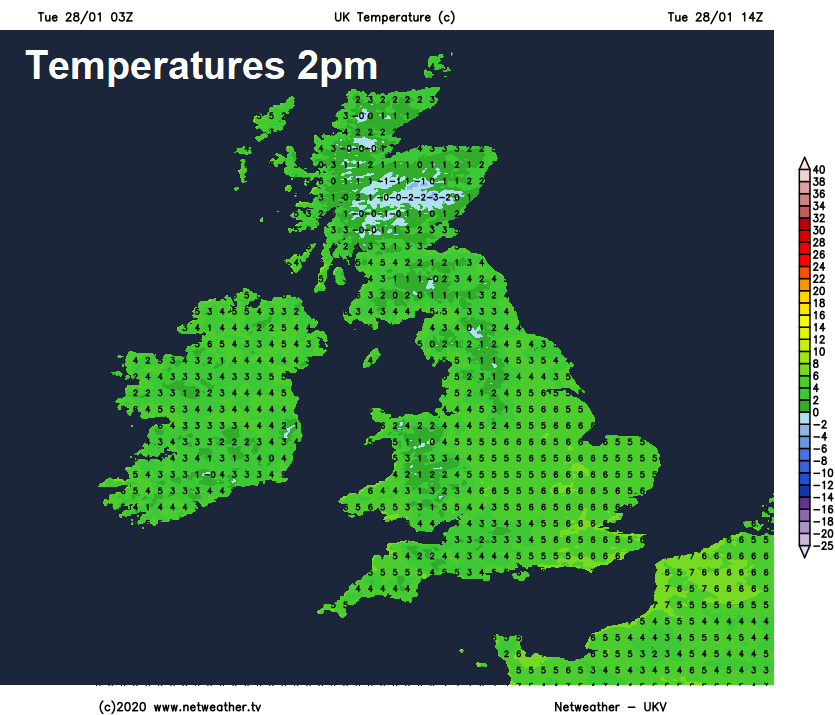 Feeling cold in the brisk westerly wind everywhere, feeling colder than Monday, temperatures reaching 4-5C in the north, 6-7C in the south.

Showers continuing to feed in across western areas this evening and overnight, though tending to ease. Clearer skies and becoming mostly dry across eastern areas. But everywhere a cold night, temperatures widely in low single figures, locally falling just below freezing in the north, so a risk of ice on untreated wet surfaces.

Turning milder on Wednesday. A ridge of high pressure building across the south will ensure most of England, Wales and N. Ireland will stay dry and bright for much of the day, though a few scattered showers can’t be ruled out. However, after a dry and bright morning, a low pressure system running east off the Atlantic will bring a spell of wet and windy weather, with hill snow across Scotland during the afternoon and evening. Temperatures reaching double figures across the south. 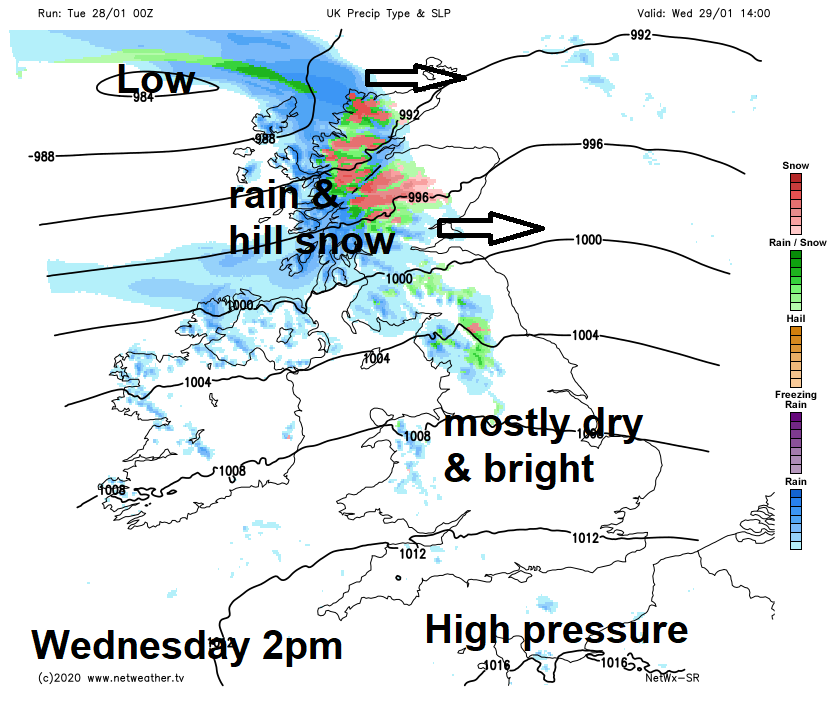 Southwesterly winds on Thursday bringing in some rather mild air, while also bringing cloudier skies and rain at times across the north, southern areas staying mostly dry though. Temperatures reaching 10-12C in the south, a 8-9C in the north. 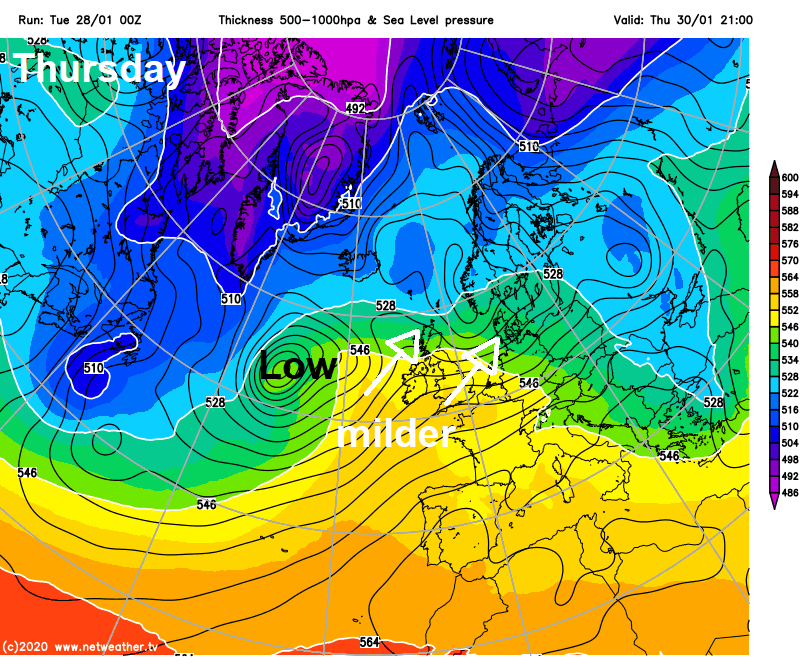 We end the week on a rather mild but cloudy note on Friday, the brisk southwesterly wind spreading outbreaks of rain across most parts at some point. Temperatures ranging from 10C in the north to 13C in the south.

The unsettled and mild weather looks like continuing over the weekend, with a spell of wet and windy weather possible at some point across all parts. However, signs that it may turn much colder from the north Tuesday and Wednesday next week, with a chance of some sleet and snow showers.